ANALYSIS: Why the Waratahs forwards are fronting up for the Wallabies

At the start of the Super Rugby Pacific 2022 season, there were any number of doubting Thomases.

Gleeful onlookers, paid or otherwise, who doubted the New South Wales Waratahs could become a force to be reckoned with in the Australian professional game – let alone in the cross-border encounters beginning at the weekend.

After a spectacularly winless 2021, there just seemed to be too much ground for new head coach Darren Coleman to cover: too many forwards to find, too many defensive barricades to build.

But where others saw only a chaos of dysfunction, Coleman observed at least some of the kind of continuity which is more usually associated with far more successful sporting teams. At pre-season training camp, he commented:

“I remember I took over Gordon and they were dead last, won one game out of 18 and people said it would take years.

“I’m not here to take years, I want to get some genuine progression quickly and keep building.”

“But it’s not a given, if we need a short-term fix for a key position, we may have to do that, just to allow those young players to be able to get the quality of ball they need.”

The 2022 Waratahs may not be sitting pretty as the domestic portion of Super Rugby Pacific draws to a close, but they are certainly discovering respectability – above 50%, fifth place in the table with five wins and three losses.

The marvel is that Coleman has achieved the transformation mostly by rearranging the pieces of the jigsaw he already had, rather than by importing new and expensive playthings. Michael Hooper has returned from Japan, but hadn’t set foot on field until a fortnight ago. Jamie Roberts arrived from Wales, but has operated almost exclusively off the bench.

Coleman has squeezed more juice out of the fruit that was already hanging from the tree, and that is a sign of good coaching. The replacement for the Six Million Dollar Man on the open-side flank, unheralded Charlie Gamble, has responded with top five SRP figures in breakdown steals (five in the first seven rounds) and successful tackles (81), while attending more rucks on attack and defence than anyone else in the entire competition.

Nowhere has the work of Coleman’s coaching staff been more impressive than in the ongoing development of the sky blue front five forwards. In this article a couple of weeks ago , I questioned the legitimacy of the tight forward selection in Dave Rennie’s first Wallaby squad of 2022.

It included seven Brumbies but only one Queensland Red (Taniela Tupou), despite the heavy pounding those Brumby forwards took in all the contact situations at the Suncorp. There were also four New South Wales tight forwards picked – Angus Bell and Harry Johnson-Holmes at prop, Dave Porecki at hooker and Jed Holloway in the second row.

A brief statistical comparison of the props and second rows from Sydney and Canberra reinforces the concerns about selection:

The picture that emerges is of of superior all-round performance by the two Waratahs props, compared to a slight edge in set-piece cohesion by the Brumbies pair, represented by the number of penalties conceded at scrum-time.

Based purely on Super Rugby Pacific form, Angus Bell and Harry Johnson-Holmes offer more on the carry and at the breakdown than their Canberra counterparts, while Bell is the best in nearly every category on the board. How much of that advantage may translate to the Test match arena? It is an intriguing question.

The Ponies’ props are not required to carry the ball on attack because of the Brumbies pressure-built, kick-and-defend gameplan, but Dave Rennie may not have the same template for his 2022 Wallabies. Similar concerns present in the second row:

Once again, neither Nick Frost nor Darcy Swain is asked to handle the ball as much as Jed Holloway – although Dave Rennie will probably feel he has the scope to develop that ability in Frost. Like the two props, they tackle more because the team philosophy demands it. For the Wallabies, there is a definite choice to be made.

Let’s take a look at the areas in which the New South Wales tight forwards have shown all-round ability in 2022. Towards the end of this article, I illustrated how well Jed Holloway and Harry Johnson-Holmes work in tandem in the heavy contact areas on defence. There was evidence aplenty over the weekend, in the best win of the season by the Waratahs over the Force in Perth, 41 points to 24.

On defence, HJH performed his speciality, winning ball on the deck, on the back of a double tackle by Dave Porecki and Michael Hooper:

Meanwhile Jed Holloway defended the lineout effectively, both on the ground and in the air. The strong impression made in goal-line defence versus the Rebels was confirmed:

Holloway has come a long a very long way from his days as a Super Rugby debutant, when he was highlight reel back-rower who tended to drift in and out of games in the wide channels. Now, he is fully committed to the grunt work in the ‘dirty areas’ of the games, and has transformed himself into the Tahs’ key lineout defender close to the goal-line – a must-have in the modern game.

The New South Wales scrum is also improving as rapidly as any in the competition on the Australian side of the Tasman. Gus Bell has made a quantum leap forward in 2022, and he, Porecki and Johnson-Holmes have improved their cohesion and understanding as a unit:

Santiago Medrano may be packing his bags for Worcester Warriors in the U.K, but he is still an international tight-head prop in an Argentine scrum. The young NSW giant had his number whether Medrano tried to keep his body-height low, as in the first example, or stand up out of the set-piece to offset the pressure, as in the second.

The variety of Bell’s passing as the front man ‘in pod’ is also developing very nicely indeed:

In the first instance (after a heavy cleanout by Holloway at the previous ruck), the ball is held out in front à la Tadhg Furlong and passed square across the body in order to commit the Force defenders directly opposite and put Tane Edmed in the hole; in the second, Bell sees the tackle-busting option to pass flat to Holloway opposed by a midfield back, Force captain Kyle Godwin.

Although he has fewer opportunities to exercise his handling ability out wide from the second row, Jed Holloway has never lost that offloading quality which was the hallmark of the early days of his professional rugby career:

Put it all together, and you can score tries of surprisingly simple construction, but coldly clinical in their execution:

Holloway wins lineout, Dave Porecki cleans out over the first carry by Marky Mark Nawaqanitase, and his angle sets the tone for what happens next: 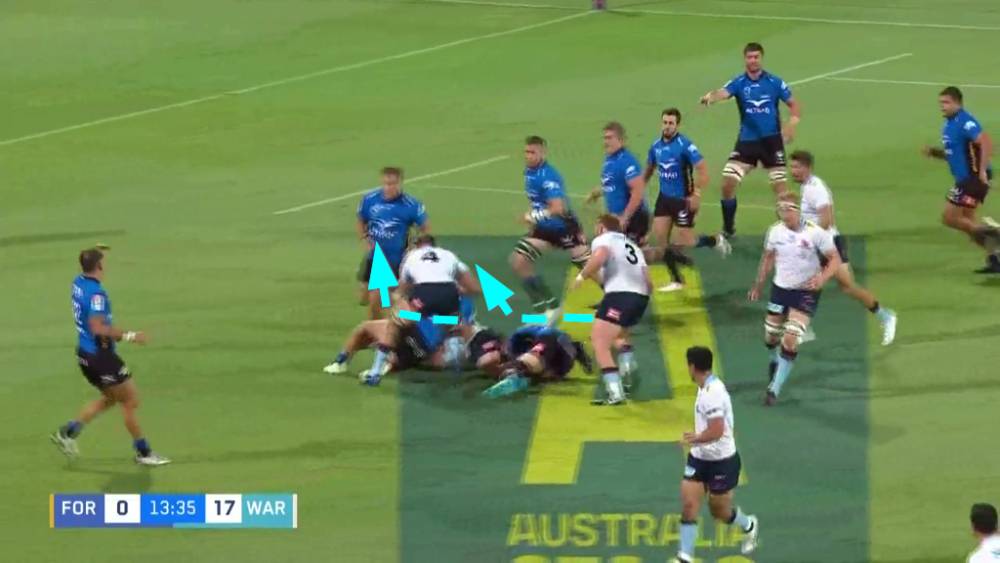 Holloway and Johnson-Holmes clean out over the next carry by Bell at an angle which opens up the far side of the field and breaks the continuity of the Force defence circling around the ruck: 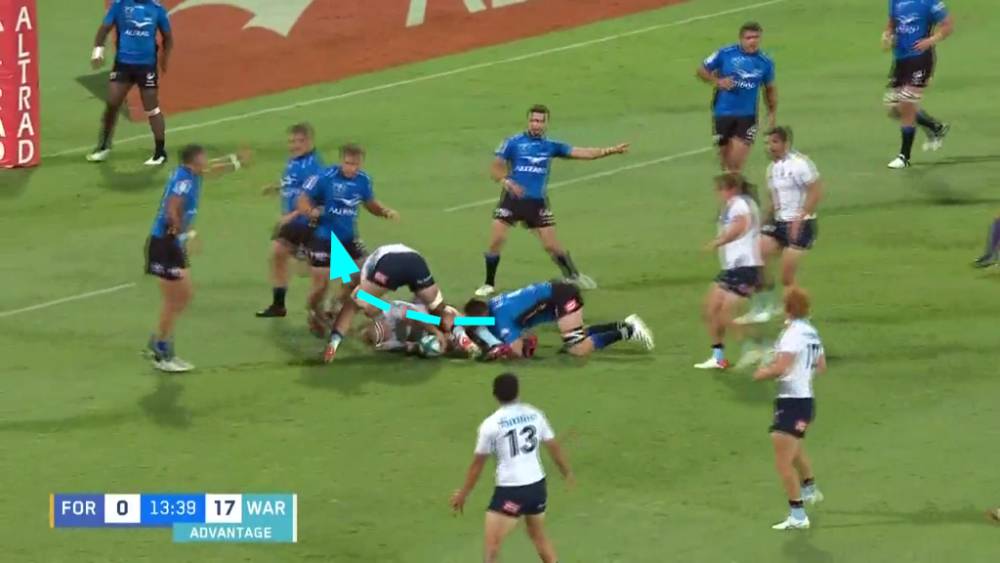 One more carry by Hugh Sinclair (another of Darren Coleman’s successful development projects) and one more angled cleanout by number 8 Will Harris, and there is no-one left to stop the Six Million Dollar Man waltzing through to the try-line, untouched by human hand. It is that simple.

The Queensland Reds gave Dan McKellar’s Brumby tight five an old-fashioned butt-kicking a fortnight ago, and the debate surrounding the composition of Dave Rennie’s Wallaby front five forwards, and the key performance indicators which should influence their selection will not go away. Not anytime soon.

Should they come from the seven-strong Brumbies clique, or should they be picked from the Waratahs plus Taniela Tupou – with Josh Nasser, Angus Blyth and maybe Harry Hoopert added for good measure in future squads? Should they be set-piece and defence oriented, or possess a wider spread of skills?

If you were to pick an Australian tight five right now, for a game against England or New Zealand next weekend, arguably there would not be a single Brumby among the starters. Gus Bell, Josh Nasser, Taniela Tupou, Matt Philip and Izack Rodda would make an awful lot of sense purely on SRP form, with the likes of James Slipper, Dave Porecki, Harry Johnson-Holmes and Jed Holloway slotting in for bench duty behind them.

Dan McKellar is mooted to leave his provincial charges at the end of the domestic season, but psychologically-speaking the movement away from those ties to Canberra may have to come a whole lot sooner, in order to recognize the quality sitting right in front of him. Brad Thorn and Darren Coleman have muddied the waters, and the Wallaby forwards coach needs to find a cold, limpid pool of clarity.