In years gone by, St Kilda’s rucks have proved the difference between victory and defeat. Just look at their results with Paddy Ryder in the team in 2021 compared to without.

But the 2022 brand of Saints is a different beast. Not even the loss of Rowan Marshall to a corked thigh in the third term, having already seen his backup Jack Hayes succumb to a ruptured ACL in the first, could stop Brett Ratten’s men marching to a fifth consecutive win, by 17 points over GWS – the gutsiest of the lot.

It came despite an extraordinary hitout differential of 77-19 – and these were no meaningless taps from Giants ruck duo Braydon Preuss and Matt Flynn. 11 in the first half went to advantage, with the Giants winning the clearance count 46-36 and the contested possessions 157-140.

Against a Giants outfit that often has their toughness in close questioned but lacks for nothing on the outside, that wouldn’t have pleased Ratten had he known about it going in. But despite that disparity, the Saints, if anything, should have won by more.

But for some errant kicking from best afield Jack Higgins and looming colossus Max King – the latter would finish with 1.7 – this could have been an emphatic win. As it stands, the Giants stayed in the game, yet never truly looked likely to win, until Higgins marked in the final 30 seconds close to goal and handballed off to Brad Crouch for the sealer.

It was the Giants’ tall timber, particularly early, that turned the match in their favour. Preuss and Flynn ruled the skies, the latter leading the ruck department, the former most influential inside attacking 50. Clutching marks at will, the pair would finish with three goals in addition to given their midfield first use – no doubt Leon Cameron will continue with the pairing into the future.

Bizarrely, it was after losing Marshall, which loomed as a killer blow at the time given the Giants’ in-form talls, when the Saints unleashed the wave that secured them the points. Trailing by 11 points at half time, they would pile on 21 inside 50s for the third term, despite needing defender Josh Battle to ruck for the second half of it.

Leading the charge was Higgins, capitalising on the abundance of ball with three goals as his earlier kicking problems fixed themselves – having shanked two from the top of the goalsquare early, suddenly they were flying through from the 50m arc with nary a problem.

Just as decisive was the Saints’ pressure, preventing the Giants of making the most of their close-in dominance. It was no surprise to see captain Jack Steele leading the charge in that category, laying eight tackles; but the silky Jade Gresham showed his tougher side with nine of his own, while Marshall got his hands dirty with six in his two and a half quarters.

Crouch, too, was influential, keeping the Saints in the match in the first half as the Giants surged in the second term. With the Saints beginning to crumble at the coalface – the Giants booted four goals from stoppages alone in the first half – he kept them alive with a sensational banana from the forward pocket, as well as some tireless work through the midfield.

While Tanner Bruhn clamped down on Crouch in the second half, it was fitting the goal that iced the game in the last minute came off his boot.

The tidy use of Jack Sinclair at half-back was also a factor. Clean and composed with ball in hand, there is plenty of Caleb Daniel in the way the long-haired, helmetless Saint plays. With Bradley Hill tagged by Lachie Ash and barely sighted, Sinclair’s importance became even more crucial to the St Kilda cause, and he delivered in spades.

Going at 88 per cent efficiency with his 26 touches, virtually every touch was a winner – and with nine contested possessions too, he has the ability to go in hard when required as well. (The same couldn’t be said for opposite distributor Lachie Whitifeld, who won’t want to look at a replay of an ugly dropped mark in the third quarter as he looked to expect contact.)

A word here, too, on Josh Battle. One of the unsung heroes of the Saints’ charge up the ladder this season, he was excelling in his usual role of defensive intercepter-cum-Harry Himmelberg stopper until duty called with Marshall’s injury. While he’d only score one hitout, he battled manfully to prevent Preuss from putting it on a platter for his midfield, and finished with a game-high 10 marks.

Returning from his infamous six-week ‘ump bump’ suspension, Toby Greene was, unusual for a player of his presence, largely peripheral. A second-quarter goal and some bullocking work to set up the Giants’ first major was the sum of his influence on the match, as Ben Paton largely kept him in check.

Looking short of match fitness and a step out of pace with the heat of the contest, it shouldn’t have been expected of Greene to prove match-winner so soon on return, and an indictment of the Giants that they were never likely to win without fireworks from their co-captain.

Now at 5-1, finals look on the agenda for the Saints, and they know they have the tools and, now, the resilience to challenge just about anyone that comes their way.

In contrast, at 1-5, the return of Greene isn’t going to be enough to suddenly turn the Giants’ season around. And without finals, Cameron is going to find it very difficult to extend his tenure into a tenth year. 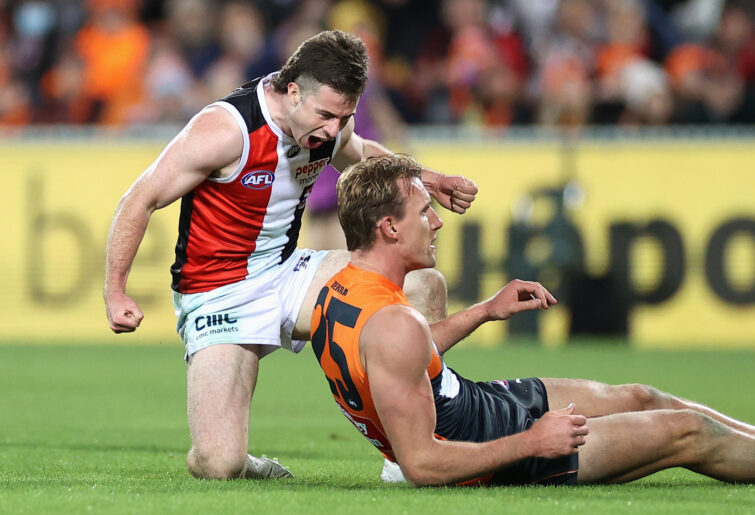 Jack Higgins of the Saints celebrates kicking a goal over Lachlan Keeffe of the Giant. (Photo by Cameron Spencer/AFL Photos/Getty Images)

And fine, I’ll talk about the latest ‘umpire dissent’ controversy. Yes, we all know the rule is badly broken, and the prospect of the AFL doing anything about it for this season at least is inconsistent with the entire way the organisation works.

But every time we see a decision like this, there is going to be controversy. And that, in turn, will lead to even more scrutiny and abuse from the public for the umpires, about whom the crackdown was designed to protect. There can be no bigger failure in a rule than that.