ANALYSIS: Australian Super Rugby teams and the game of snakes and ladders

Everyone of a certain vintage will fondly remember the board games of their youth: Monopoly, Cluedo, Scrabble, Trivial Pursuit, Jenga. There is always a favourite. Usually they were only dusted off once a year, as the family circle formed around a soft festive glow of a Christmas Day evening.

That freshly-minted word that could never be found in the dictionary, the ‘Get Out of Jail Free’ card hidden surreptitiously under the board, the brick which finally caused the tower to topple. Banter would echo around the room and the threads which held friends and family together would be invisibly, and momentarily strengthened.

The game which symbolizes the current passage of Australian professional rugby the best is Snakes and Ladders. Every short cut to the top of the board seems to be undermined by a couple of long and winding slithers back to the very start of the game.

The Brumbies were the only winners among Australian sides, overcoming the Highlanders 28-17 on the penultimate leg of a lively Rugby weekend in Melbourne.

The Canberra-based outfit currently sit at number two in the Super Rugby Pacific rankings, but the likely departures of three or four of their back-line starters (Noah Lolesio, Irae Simone, Tom Banks – with Nick White still sitting on the fence) next season undermines further progress by stealth.

For all of the Australian coaching staff in Super Rugby, team-building over a span of seasons is becoming an increasingly difficult exercise. As soon as they begin to cement one block over the top of another, one of the foundation stones tends to disappear and work has to begin again – if not from scratch, then close to it.

How long can the professional game in Australia sustain those losses? Has the player drain to Japan and Europe damaged the fabric of the top tier beyond repair? Are five provincial teams truly viable with depth of talent available? These are just some of the questions circling overhead after the first round of cross-border matches versus teams from New Zealand.

Within the games themselves, the lack of depth and continuity shows.

The Roar Rugby Podcast host Brett McKay and Harry Jones are joined by Greg Clark to talk about Fijian Drua ahead of their homecoming, and pick their current All Blacks XV

Sustaining the required quality of effort, mental and physical, for a whole game has become problematic for Australian teams.

The Waratahs bravely managed to claw their way back to within three points of the Chiefs with half an hour to go after losing Angus Bell to a red card in only the second minute, only to concede the last 21 points. The Queensland Reds led by 17 points after 30 minutes, but lost the last hour of the match by 30 points to nil.

As scrum-half Tate McDermott commented ruefully, in an interview on Stan Sport immediately after the game:

“I’m really proud of our first half, but we came out for the second half and we were a different side.

“If you give Kiwi teams that much possession, you are asking for trouble. We got a warning last week playing the Rebels, and that second half was nowhere near good enough.

“We got away with a lot playing the Aussie teams… I would have to look at our error rate out there.”

The match itself was a grand tribute to sporting cliché. It was both a classic example of the old boxing maxim that ‘styles make fights’, while nodding to the soccer platitude about a ‘game of two halves’. The Queensland Reds ended up losing both contests.

In my cross-border preview article a couple of weeks ago , I highlighted the key differences in New Zealand rugby: more ball-in-play time (three and half minutes), more rucks built (10 per team per game) and a higher proportion of lightning-quick ball produced (+10%) in the domestic portion of Super Rugby Pacific.

Over the first three matches of the weekend (Chiefs vs. Waratahs and Hurricanes vs. Reds) the stats were pulled inexorably towards the Kiwi gold standard. Ball-in-play time was two-and-a-half minutes longer than the Aussie teams are used to, and the sides from New Zealand averaged 94 rucks per game at over 60% LQB.

The Queensland Reds came in with a sensible game-plan, one which fully earned them their lead during the first period. With James O’Connor absent from the number 10 spot, they focused on using their strength at the set scrum as an attacking platform to launch Tate McDermott and their two Wallaby squad back-rowers (Harry Wilson and Fraser McReight).

When they were not winning penalties from the set-piece, the Reds were setting up their potent interplay in the triangle at numbers 7, 8 and 9:

The first example, McDermott picks the ball out of channel one to burst around the right corner of the scrum, with McReight inevitably, in close support. In the second, Harry Wilson uses his halfback as the decoy before making the clean bust himself.

The scrum was a weapon on both attack and defence for Queensland:

The signs of stress ripple out from a set-piece under pressure on to the backs. Tate McDermott can use the momentum to slingshot himself from the base all the way down the line, and all of the Canes’ passing occurs well behind the advantage line, with the final delivery an easy spot for Filipo Daugunu. Fraser McReight is on hand to pick up the loose ball from a ruck fully five metres behind the site of the original set-piece.

Where McDermott, McReight and Wilson had enjoyed at least four pieces of line-breaking interplay in the first period, it largely dried up in the second half. Here is the only instance from a scrum:

Harry gets a nice overhead offload away from the advancing scrum to Tate, and he has Fraser on his inside shoulder in support.

As the game clock ticked on, it highlighted more and more obviously the Queensland players truly capable of maintaining the intensity, work rate and speed of thought necessary to compete on even terms with a team from New Zealand: Wilson, McReight and Taniela Tupou up front; McDermott and Hunter Paisami behind.

The set-piece structure of game itself began to dissolve naturally as time wore on, and that suited the Hurricanes just fine. Where Queensland wanted to keep play close to their control at set-piece, the men from Wellington made an increasingly profitable living out of the chaos after every change of possession.

Like all good side from across the Tasman Sea, they know how to switch gears, and change it up from kick returns:

Jordie Barrett makes the receipt on the burst, and within couple a more phases the ball is back in his hands after the ball has travelled to the opposite side-line and back again. The players attempting to tackle him are the two tight forwards (Ryan Smith and Harry Hoopert) who made the tackle on the first phase after the catch.

This is how teams from the shaky isles bring confidence and momentum into their game. They are comfortable in chaos:

Jordie offloads after the receipt, and it allows another Hurricanes back (Aidan Morgan) to run straight at poor Hoopert. It is left to Tate and Fraser to get back with their dustpans and brushes to clear up another fine mess.

The Hurricanes steadily expanded the range of turnovers, from kick to fumble returns as the Queensland energy bank began to run dry: 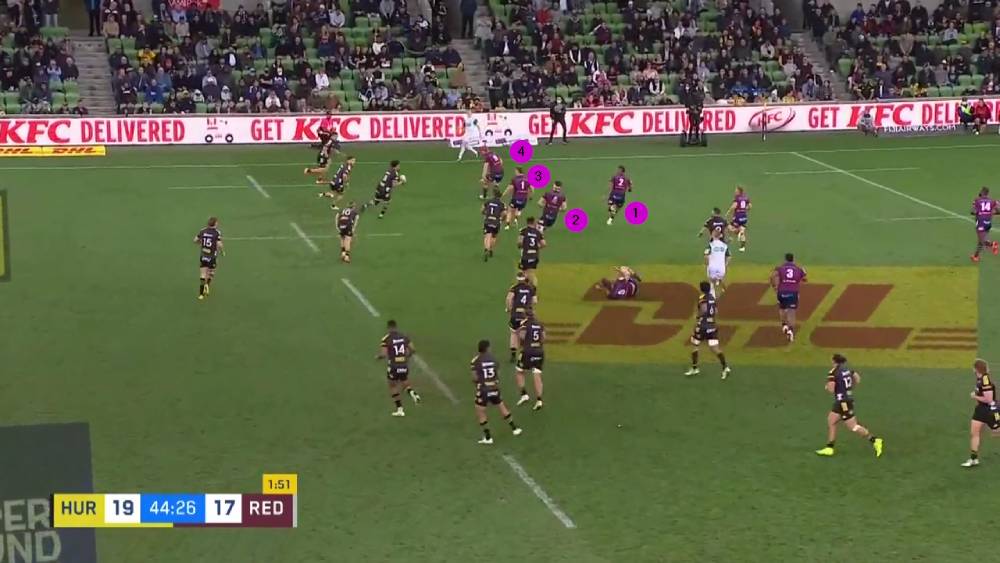 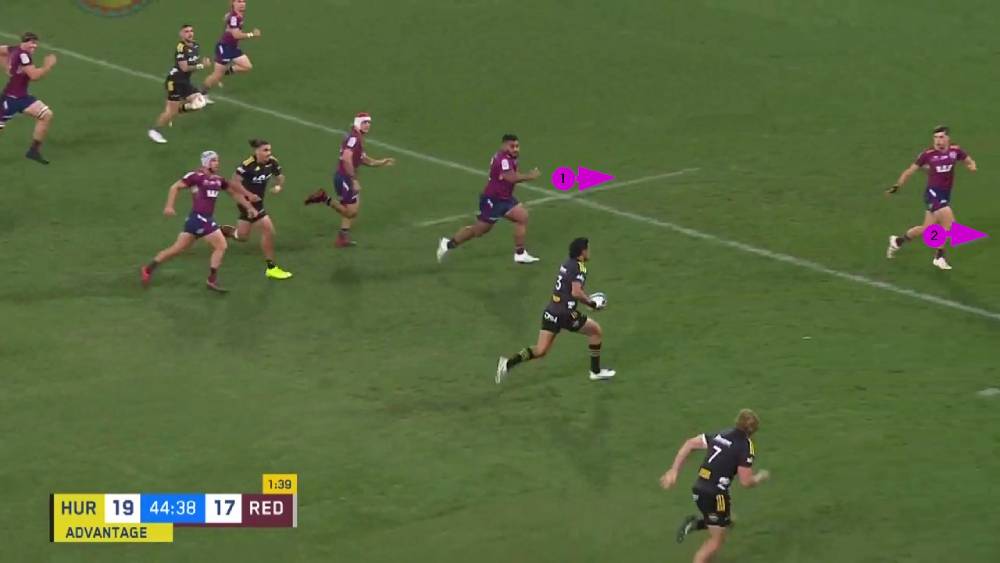 The pass from Hamish Stewart is knocked down and backwards by Bailyn Sullivan, and once again Reds’ forwards are left to defend the wide channels by the sudden change of possession. Even Taniela Tupou is struggling to keep pace as the ball bounces back to Sullivan in the right hand 15 metre corridor.

The Hurricanes padded their countering repertoire with turnovers from lineout and breakdown:

With sides from New Zealand able to stretch opponents across the full width of the field and make demands on all 15 players consistently, the rugby climate in Super Rugby Pacific has just become a lot harsher and more unforgiving. Only the fittest Australians, mentally and physically, will survive, and continue to climb the ladder to international level.

There were a lot more snakes than ladders on offer the from land across the Tasman Sea in the first round of cross-border competition. A sunny weekend of rugby in Melbourne yielded an average margin of 15 points between Australia and New Zealand over the four matches, and that accurately reflected the difference in quality.

The Brumbies managed to bend their game against the Highlanders into a shape that suited them. There were 13 more kicks than in any of the other Anzac encounters, and that helped dilute the uplift in breakdown intensity and ball-in-play time. They will find it much harder to repeat the dose with impunity in the remaining matches.

For the Rebels, Reds and Waratahs it is not ‘back to the drawing board’, but many of the problems spotlighted in 2021 remain. The issue of the ladders built during the domestic part of the tournament being kicked away by cross-border competition is still a glaring one.

All five Australian teams need a higher proportion of players who can manage the increase in ball-in-play time and the quicker repetitions at the breakdown better. Queensland had five players who could obviously manage it, and there may be others within their squad who can make the same jump, given the exposure.

At present, the gap is still too wide to be bridged comfortably, and without further shocks to the system. There is not enough stability in a five-team structure with top players regularly leaving for Japanese or European money; too many slippery snakes, broken ladders for development. And no ‘get out of jail’ free cards at all.