What is it called when you have a premiership hangover without the premiership? Because that’s what is afflicting the Western Bulldogs right now.

The Dogs wouldn’t be the first team to be blown to smithereens on grand final day and miss the finals the next year. You can never tell which clubs are going to be affected by the psychological scarring, but it’s real.

GWS lost by 15 goals in 2019 and didn’t make the eight in 2020. Adelaide lost by only eight goals in 2017 but had assumed the flag was going to be theirs until Richmond kicked 11 of 12 goals through the middle stages of the game. They were blown away and haven’t played finals since, and only now, five years, later do they look on the rise again.

It used to be thought that grand final defeat would be used as the ultimate motivation the next year to go one step further, but it hardly ever happens anymore. Only once in the last decade in fact. Perhaps the modern generation is too soft and doesn’t have the resilience to bounce back.

So where does that leave the Dogs?

It was clear that things weren’t right after their Round 1 defeat at the hands of Melbourne when Luke Beveridge gave the most explosive post-match press conference of modern times and perhaps ever.

Bullying and belittling Tom Morris over a simple player selection story did not scream of a man in control. This was not a coach that had presided over a preseason of discipline and focus. It was a loose cannon with his priorities well out of order, the product of a frazzled mind. Lo and behold, so the Dogs season has gone. 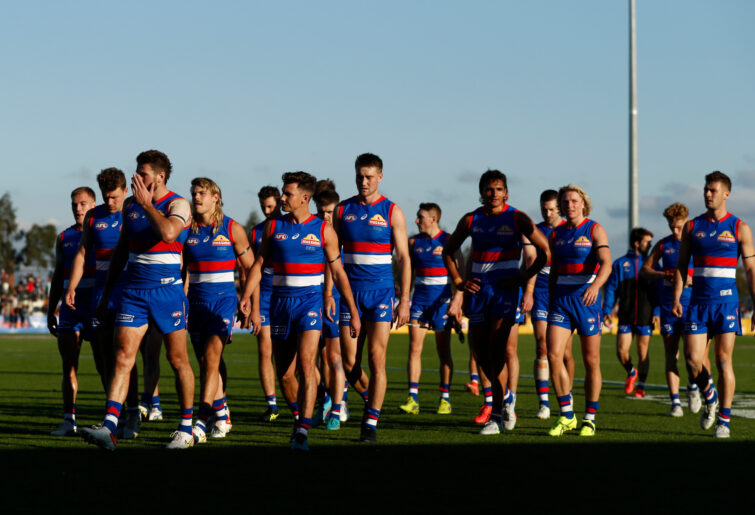 The Dogs were smashed in contested possession in their first two losses against Melbourne and Carlton, losing that particular stat by a combined 58 in those games. That’s rare for any team, let alone one with so many gun midfielders.

The contest and clearance work was corrected in games against Sydney and Richmond, but this is when their disastrous inaccuracy kicked in, registering a woeful 16.36 on the scoreboard. They escaped with a win over the Swans but weren’t so fortunate against the Tigers.

We know the Dogs love playing North, and so it continued in Round 5. We know they win lots of football and share it around, and never have they found it easier than against the beleaguered Kangaroos in recent times. It starts to give off the whiff of downhill skiing.

The loss to Adelaide in Round 6 was different again.

While they didn’t win as much of the ball as they could have, they still got enough of it to inflict more damage than they did.

The Dogs can muck around with the ball, like all teams, but at least their ball-winning usually leads to significant inside 50s. You can say they don’t always find a target, especially with Josh Bruce missing and Aaron Naughton carrying heavy loads, or that they can’t hit water from a boat when shooting at goal, as has happened, but they generally give themselves some sorts of chances.

Against Adelaide they generated only 43 inside 50s from their 367 disposals. It was the first time they’ve dropped below 50 inside 50s this season, but it happened regularly at the back end of last season when they lost a string of games.

Unbelievably, last year’s grand finalist has now lost seven of their last nine home-and-away matches. They are 5-8 from their last 13 overall.

The Bulldogs can’t play North Melbourne every week, as much as they’d like to. And right now they are finding it impossible to find consistency in any area of the ground. They’re losing in different ways, and in their only non-Kangaroos win they received the most friendly umpiring of the season.

Luke Beveridge was confused over nonsense in Round 1, and his team has reflected this in their play ever since. Not every team can recover from a stark failure on the grand final stage, and his Bulldogs might just be the latest in a long line. Their 2022 might just have been over when the siren on 2021 sounded for the last time.