The Roar
28th April, 2022
23
Join the conversation
1001 Reads
Advertisement
Write for The Roar

Tension is growing in the dispute between the ARL Commission and the NSW Government with chairman Peter V’landys and Liberal deputy leader Stuart Ayres engaged in a public slanging match.

Ayres said he was confident the NRL grand final would remain in Sydney and told V’landys to move to Queensland if he wants to relocate the premiership decider to Brisbane.

“We’re very confident that the NRL grand final will stay here in its traditional home in NSW,” he said at a media conference to promote the Wallabies’ Test against England at the SCG in July.

“We’ve invested substantially in rectangular venues, which the NRL is the major beneficiary of. We’ve been a great long-term partner and I think the fans expect that the game stays here. If Peter V’landys took the grand final to Queensland, he probably should move up there, too.”

V’landys responded by telling the Sydney Morning Herald that “if I want to attend major events maybe I have to move to Queensland. Destination NSW wouldn’t know an event if they fell over it. We haven’t even heard from them.”

The NRL looks likely to put the grand final out to tender so its location goes to the highest bidder rather than always being held in Sydney.

V’landys will be his meeting NSW Premier Dominic Perrotet on Friday to discuss the issue.

The NRL is considering a hybrid model where heartland cities Sydney and Brisbane host the match on a regular basis but it would also potentially be sold off to other cities in Australia and New Zealand or perhaps even further afar.

Melbourne Cricket Ground, the Adelaide Oval and Perth’s Optus Stadium have held State of Origin matches while Auckland’s Eden Park is another option.

“Naturally, we have to look at a Super Bowl-style situation where states get the chance to bid on it,” V’landys told the SMH. “We have to remember this is called the National Rugby League for a reason.

“And the reality is that the grand final will still have a place in Sydney. It won’t go every year. But the idea of taking it on the road is something we’re certainly considering. If we opened it up we’d have interest from every state.” 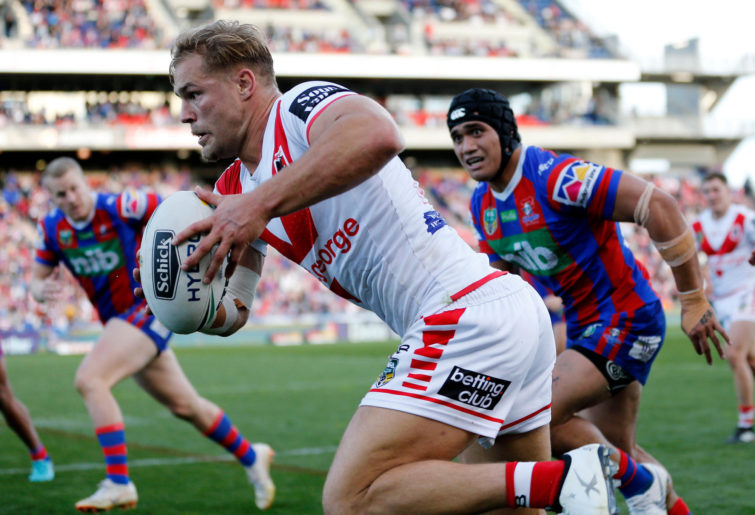 Dragons forward Jack de Belin said he played no role in choosing the journalists who attended his first interview since returning to the NRL after sexual assault charges were dropped against him.

ARL Commission chairman Peter V’landys was furious when the veteran forward was interviewed by a small group of journalists, all male, last month to answer questions about the off-field incident which led to him being stood down for more than two years.

In an interview with Channel 9 reporter Emma Lawrence, he said the club had organised for the initial meeting with the media and it had not occurred to him about the lack of female reporters being a problem.

“To be honest I had no idea about that, the club arranged for that to happen. I didn’t put any thought into it, but obviously hearing that, it would have been nice to have a female reporter, and get maybe her perspective on things and ask a few questions but that was out of my control and I had no idea what the go with that was.

“I can see why people might have been frustrated or it probably didn’t look aesthetically pleasing but I had no control over that and if there were 20 female reporters there, I would’ve been happy to answer their questions.”

The 31-year-old former NSW back-rower, who played 11 matches in the NRL last year and has played all seven games for the Dragons this season, has been named to start at lock for Sunday’s tussle with the Tigers in Wollongong.

He still harbours ambitions of a return to the Origin arena but with Isaah Yeo, Cameron Murray, Jake Trbojevic, Victor Radley, Dale Finucane and Nathan Brown ahead of him on the Blues’ pecking order, his chances of a recall seem remote.

Justin Olam insists he’s not among Melbourne’s big guns despite his value skyrocketing in his five NRL seasons with the Storm.

The reigning Dally M centre of the year, Olam is a feared defender, while his attack has continued to improve to become one of the side’s most consistent performers.

In the Storm’s 70-10 romp over the Warriors last round, Olam scored the final four-pointer of their 13-try haul and, showing his work-rate, topped the run metres for his team with 202.

He has formed a lethal edge combination with Cameron Munster, Kenny Bromwich and recruit Nick Meaney, who he calls the “Ferrari”.

“We have some very good players who can create things out of nothing and I think that’s the good part of our team,” Olam said.

“We have our game plan but our key players, they have the ability to look up and see what’s the right play to execute and that’s a big strength.”

And rather than viewing himself as a Storm star, Olam says he’s “just one of the boys in the team, doing my job”.

“I don’t see myself as a big player,” added the 28-year-old, who has a Bachelor’s Degree in Applied Physics.

The Papua New Guinea international is off contract at the end of the season, although the club has an option in their favour.

“I’m happy where I’m at right now and not worried about those things,” he said, unaware of any interest from other NRL clubs.

“If the Storm and my manager want to continue our partnership, I’m always grateful to be here, but it’s up to Melbourne to decide if they want to keep me.”

The Storm face Newcastle on Sunday afternoon with the Knights eager to put on a good show in front of home fans after a 39-2 shocker against Parramatta at McDonald Jones Stadium last round.

The Broncos (3-4) face a proper examination on Thursday night at Suncorp Stadium against an in-form Cronulla (5-2).

The 2020 wooden spooners sit ninth and in their best position after seven rounds since Wayne Bennett left the club in 2018, although two of those wins have come against the last-placed Bulldogs.

Walters (10-21) is currently the least successful full-time Broncos coach and has work to do to improve on predecessor Anthony Seibold’s 14-23 record.

But he says he isn’t letting the win-loss ratio get to him, flagging the next four weeks as critical in the side’s recovery effort.

“Yeah, I thought the magic wand would work,” Walters said with a wry smile.

“We’re heading in the right direction, trying not to focus on winning and losing, it’s about us getting better.

“We’re doing that at different stages, but it’s just going to take a little bit longer than we all anticipated.

“I’d like to think in a month’s time we’re playing the football consistently where we need to be at.”