Coach's Corner: Aaron Smith is the gold standard but White and McDermott have key tools of the modern No.9

Lots of interest this week in the role of the scrum-half in the modern game, and the contrast between halfbacks from Australia and New Zealand.

It’s worth taking time to assess the unique role of the number 9 in the professional game. Wind back the clock to 2014, and you can find articles like this one appearing in the digital media:

“During training last week Aaron Smith’s live GPS readings were so high he had to be told to slow down. The scary thing was he was a reserve and had still covered the second most distance in the squad.

“I get told off a lot at training because when the whistle goes, I sort of keep going,” Smith said. “Steve [Hansen] is pretty vocal about saving my energy, which I’ve learned to do over the last couple of years.”

The demands are now even higher than they were in 2014, as the amount of ball-in-play continues to rise. Now, a top number 9 will be expected to attend over 95% of own-ball rucks, and there could be as many as 120 of those in a game. He will be running on average between seven and eight kilometres, about 20% more than any other player on the field. As a point of comparison, a prop will cover approximately 4.5-5 kms, with far fewer sprints or changes of gear.

Aaron Smith still remains the gold standard, for his movement between stopping points (rucks), the accuracy of his support lines, and his decision-making when he arrives at the scene of the action.

Let’s take a look at some examples of his aerobic endurance and precise lines of running from the game between the Highlanders and the Hurricanes earlier in the Super Rugby Pacific season:

As the ball is kicked high into the Forsyth Barr air by Marty Banks, ‘Nugget’ turns to the Highlanders’ number 10 to agree policy for the next play, before recovering the loose ball and releasing an attack down the right side-line.

In the second clip, he zips a pass away straight off the deck – flat and hitting the receiver just where he wants it, on the outside shoulder of the third defender out from the ruck. That enables easy width to be achieved to the opposite side-line.

Can Nugget shift from a ruck on the wide right to attend a breakdown on the wide left, in the space of one play? He sure can: 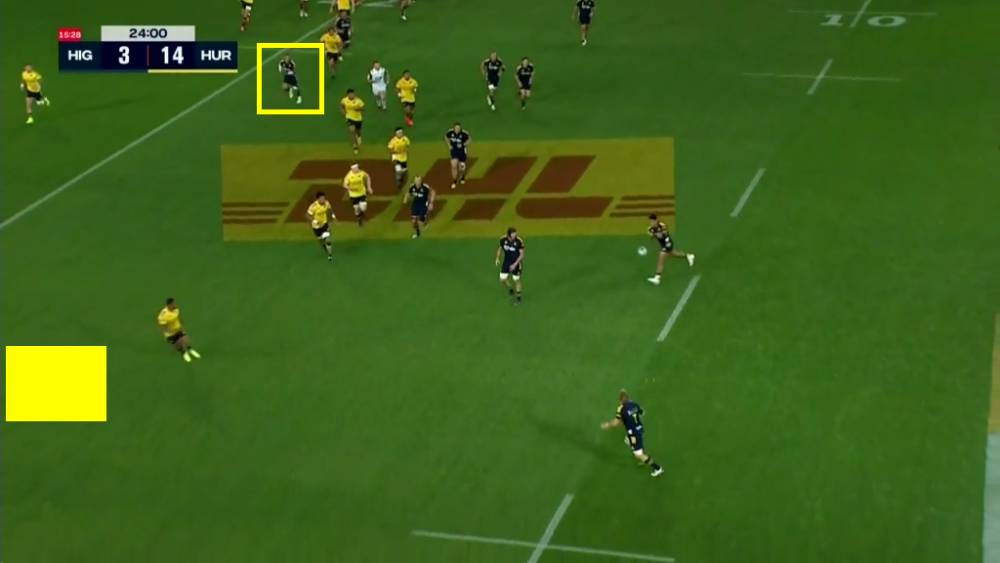 He doesn’t follow the ball backwards, he takes the shortcut straight across the width of the paddock: “the shortest distance between two points is in a straight line”.

In the space of two phases, he has triangulated from midfield to both side-lines and attended two breakdowns, while providing support and a quick accurate service with no ‘lift’ off the ground.

The next example illustrates how a modern halfback takes short-cuts on kick returns, with the ball ballooning back and forth over his head: 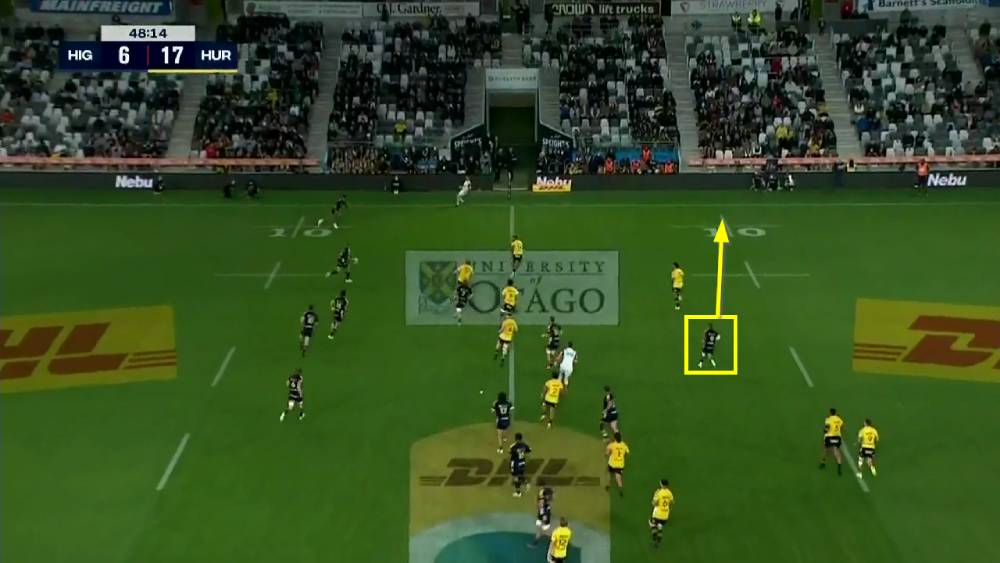 The modern scrum-half does not retire back towards his own goal-line during the kick exchange, he is typically the furthest player upfield. His job is to anticipate the outcome of the return, and arrive in the right place at the right time:

Before he ever reaches the base of the ruck, Smith has made his choice of play, dropping in a neat kick for the majority of Highlander attackers over on the left touch-line.

Wallabies_Larkham shifted the debate in the direction of the Brumbies’ win over the South islanders:

“Can you point out the key aspects of the Brumbies gameplan over the ‘Landers as Brumbies built far less rucks?”

“What do the Wallabies need in a starting 9 – Tate’s dynamism or the control and skills of White?”

There were 57 kicks in the match between the Brumbies and the Highlanders, 13 more than in any of the other cross-border encounters in Melbourne. The key to the Brumbies’ success was the precision of their kicking game, keeping a firm lid on the Highlanders’ return team. At the heart of it all was the estimable Nic White, who made the most kicks (six) without allowing a single return opportunity for the opponent:

The backfield is open, and White’s kick gives the receiver (Mitch Hunt) an unenviable choice between a goal-line dropout and a short touch within the 22. In both cases the men from Canberra will get the ball back in good attacking position.

White was also at the centre of the running game, and demonstrated the same ability to take the shortcut between rucks as Nugget: 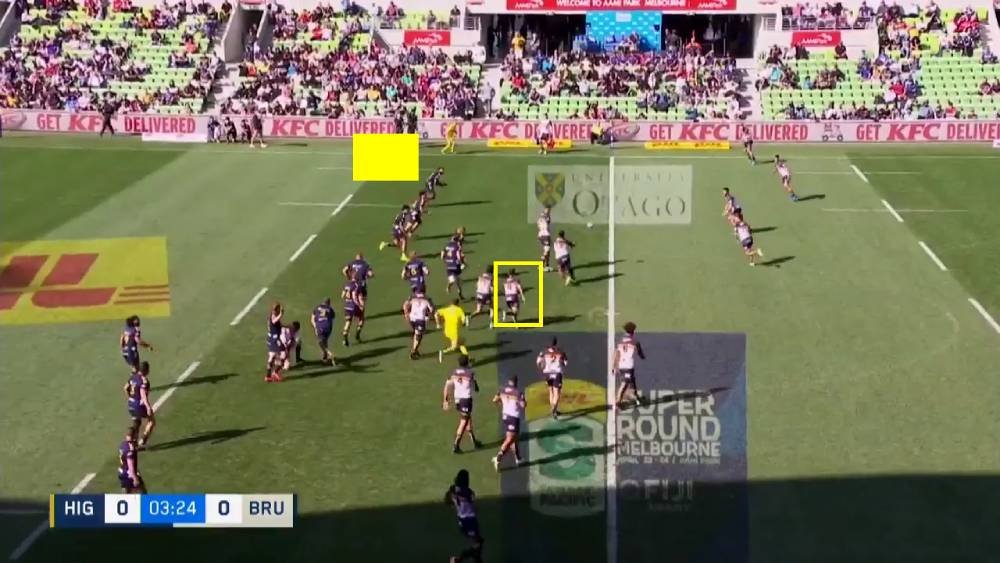 White accelerates past five of his team-mates to attend the ruck in the right 5m corridor, then shoots a delivery off the deck before setting up attacking play around the corner of the next breakdown with the reverse pass to Noah Lolesio.

He was at it again a few minutes later:

White is square to the D and holding the ball in two hands, and therefore able to drag the inside defence in the direction he wants them to go. It is the puppet-master at his best.

One final sequence illustrated both the effectiveness of the Brumbies’ kicking game and the modern demands on the halfback:

Noah Lolesio’s contestable kick is pinpoint-accurate and allows no return. Nic White runs from a ruck on the left 15m line all the way over the right, to become the primary support player for Irae Simone on the breakout.

Both the Reds and the Brumbies profited by playing off their number 9’s in the first round of cross-border competition, and there are no two scrum-halves in Australia better at it than Nic White (as a kicker) and Tate McDermott (as a runner). They remain the best options for Dave Rennie and the Wallabies.

There were also questions comparing the standard of SRP competition to the knockout rounds of the Heineken Champions Cup in the north.

There is no question that the standard of rugby in the north has improved as the quality of Super Rugby has declined. Ten years ago, there was no argument: Super Rugby was far better, hands down. When the Crusaders played the Sharks in a match at Twickenham after the Christchurch earthquake disaster in 2011, the crowd were in awe of the quality on view:

But if you take a closer look at the Sharks side which played that day, nine of the players subsequently headed north to French or English clubs to earn their living, and they were joined by one of the Crusaders (Sean Maitland).

Northern Hemisphere rugby has gone from strength to strength with the influx of top players and coaching IP from the South, and responded to the upgrade in standards.

The latest round of the Champions Cup proved that the top teams are no longer satisfied with ‘kick and clap’, but want to move the ball from any position on the field. Take a look at these two bits of evidence from the double-header between Montpellier and Harlequins:

Those are English players who are doing the play-making and the finishing (Marcus Smith in the first instance, Zach Mercer in the second), and you would be pushed to find similar examples from the number 10 and number 8 positions in previous generations of the English game.

Let’s finish with some questions about the current refereeing adjudication of the deliberate knock-on.

Referees are encouraged to penalize cynical play, when defenders are not looking to catch the pass, but simply to knock it down and spoil attacking flow. If the ball clearly travels backwards during the knock-down, there can be no penalizable offence, however much cynicism is involved:

These two examples come from the game between the Reds and the Hurricanes. The ball from Canes number 13 Bailyn Sullivan clearly travels backwards from the hand in the second instance, and it looks as if he may be trying to catch the ball too. So, no penalty.

The first example, with Julian Savea involved as the defender, is more contentious. The ball goes straight down off the defender’s hand to the ground, but because Savea is already in front of the pass, he gets the benefit of the doubt.

The danger chiefly arises when the defender is behind the pass, and reaching for the ball at full stretch:

Jamie Roberts is not ’in play’ (unlike Savea and Sullivan) because he is well behind the ball when he claws at it. The two Hurricanes are both more realistically positioned to make a catch than the Welshman, and that is how the match officials saw it too. I think all three calls were reasonable within the current refereeing framework.

Many thanks once more to all who contributed a question, see you again for Coach’s corner next month!