In this next series of articles I will attempt to put together a quality team for each NRL club comprised solely of players since 1980 who never went beyond club level.

The criteria for selection is:

The rules are simple but selection has turned out to be difficult. Before 1980 this would have been an easy task.

Any player in the Sydney competition had only three avenues for representative selection – City, NSW or Australia. That meant around 30 players at most would get a rep jersey each year, leaving a large number of quality players to spend their entire careers as club stalwarts.

Now, virtually every country selects their best eligible players from the NRL competition. Between England, NZ, the Pacific nations, plus any player that can find a grandparent with Italian, USA or Lebanese heritage, the player pool for this exercise can be slim pickings.

While representing City has gone the way of Glebe, it was still around up to 2017 (and was both City and Country Origin) plus we now have the Indigenous and Maori All Stars hoovering up the cream of the remaining crop.

Even so there are around a dozen players since 1980 that I found who managed to chalk up more than 200 first-grade games without ever being noticed by selectors.

We start with the Brisbane Broncos. Unfortunately the Broncos are to rep football what NSW are to cricket – players used to get their Queensland jersey handed to them with their Broncos kit on debut.

So there is not lot to choose from. Nevertheless I have ploughed on and come up with a quality team, including a grand final-winning halfback and one of the greatest bench players of all time. 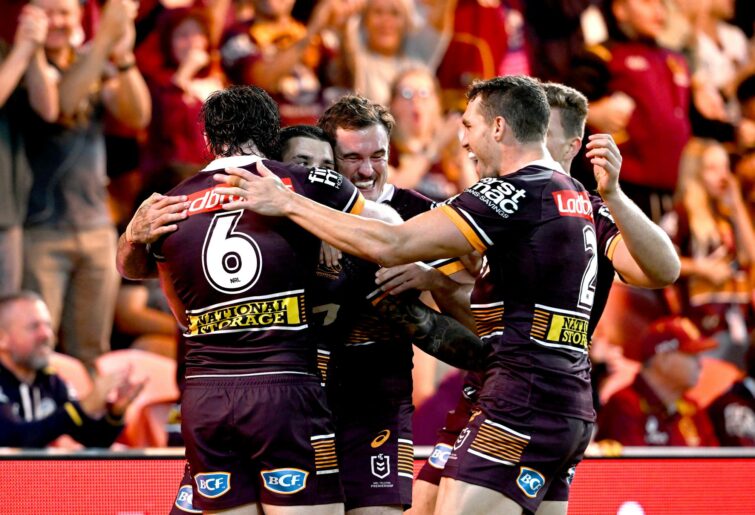 Shane Duffy (22 matches) – 1988-1989 – 14 wins, eight losses, no points. One final, one loss.
Shane Duffy came out of Mount Isa and made a bit of a splash up in North Queensland before becoming the 26th player signed to the Broncos for their debut year in 1988.

When incumbent Colin Scott went down injured in Round 11, Duffy made his debut and put in some quality work over the remainder of the season. Duffy was named rookie of the year, alongside Kerrod Walters.

Duffy started 1989 as the first-choice fullback and was the custodian as Brisbane won their first ever trophy – the 1989 Panasonic Cup pre-season competition.

It all went downhill after that and after the first 11 rounds of 1989 he was replaced at fullback. Duffy’s final game for Brisbane was coming off the bench in the 1989 playoff for fifth between Brisbane and Cronulla.

His grandfather Barry was one of the club’s founders, his dad is on the other wing in this team and his mother was once an assistant to Wayne Bennett. Maranta started at the club as a five-year-old ball boy.

Maranta played for the Broncos for five years, and was rookie of the year in 2012. He topped the try-scoring list for the club in 2015. Maranta was actually chosen for the 2016 All Stars match but a wrist injury allows him to take his place in this side.

After 2016, Maranta switched to rugby union then returned to league for St George Illawarra, but only played a couple of first-grade games, before moving to Wynnum-Manly in the Queensland Cup.

Brett Plowman (53) – 1988-1993 – 33 wins, 20 losses, 17 tries.
Lachlan is joined on the wing by his father, the freight train that was Brett Plowman. Never has a name been more appropriate as the burly winger ploughed through opposition defences, with no sign of a step or a swerve.

Plowman was something of a cult figure during the first six years at the Broncos without ever really nailing down a spot. However, when in full flight, Plowman was a sight to see.

He later spent a couple of seasons each at Parramatta and the Gold Coast, playing over 100 first-grade games.

Copley played 75 games for Brisbane, splitting his time between the centres and wing. He played finals for the club in 2011, 2012 and 2014, scoring three tries.

Copley topped the Broncos’ try-scoring in 2014 and was selected for the Kangaroos’ train-on squad, but thankfully for me, he did not make the final cut. The same thing happened with the Queensland emerging Maroons squad in 2016.

After leaving Brisbane, Copley spent time at the Gold Coast and the Sydney Roosters, before a brief return to the Broncos in 2021. Copley completed a law degree this year.

Apart from Dale Copley, if you have played 15 games in the centres for Brisbane you have a rep jumper. The only exception is Steve Michael, who played 59 games for Brisbane, but unfortunately for me played 60 games during his time at the Gold Coast and is therefore taken by the Titans.

As a result, in a fairly sparse field, the second centre position goes to…

Willie Morganson (18) – 1991-1993. 14 wins, four losses, four tries.
Morganson just played ten games in the centres for Brisbane, but won eight of them and scored four tries, including a double in 1991 against North Sydney.

As a North Queensalnd junior, Morganson moved to the Cowboys in 1995 for their entry into the NRL, but met with limited success.

He then moved to Sheffield in the English Super League for a couple of years, scoring a try in the club’s victory over the Western Reds during the ill-fated 1997 World Club Challenge series.

After retiring from professional footy, Morganson represented Queensland Police in their annual clash against NSW for a few years and these days is a school teacher in Mt Isa.

Walker was Brisbane’s first-choice half or five-eighth between 1999 and 2000, but actually played 41 of his games from the bench.

Walker’s great strength was his kicking game, both in general play and goalkicking. He scored 242 points for the club but the pressure of being the next Alfie Langer was always there.

He was unlucky to miss the 1998 grand final after being included in the team for the preliminary final.

Walker left in 2001 to join the ill-fated Northern Eagles. He was a success at least, being the NRL’s leading point scorer that year with 279 points.

He also played a season for Manly and a couple for South Sydney for a total of 135 NRL games.

Perry had already spent a number of seasons at Redcliffe in the Queensland Cup as well as previously on the fringes for NRL clubs, Wests and Canterbury.

At the start of the 2006 season, Bennett needed a steady hand to run the forwards, take the odd kick and allow Darren Lockyer to shine. He found the reliable Perry and the rest is history.

Perry played on for Brisbane in 2007 and 2008 with limited success. He had already climbed the mountain. He finished his career with a working holiday at Catalans in the English Super League.

At QRL level Perry played for Brothers, Logan, Redcliffe and Norths in a 218-game career. He won premierships with Redcliffe in 2002 and 2003 and captained the club in 2005.

Walker got so close to a title in 2000, appearing from the bench in Brisbane’s qualifying final win over Cronulla, but was made 18th man for the grand final. He was five-eighth in 2001 and hooker in 2002 as the Broncos went down in consecutive preliminary finals.

Walker captained the ‘Baby Broncos’ to a memorable win in 2002 over the Wests Tigers with virtually the entire first-choice side on Origin duty.

At the press conference Walker became a legend for this quote: “Mate, I haven’t been this happy since I came home and my missus was dressed in a French maid’s outfit”.

Ironically the player who laid on the try with a kick was also a relative nobody compared to the rest of the team – Craig Grauf.

To be honest, that was probably the highlight, along with winning the 1989 Panasonic Cup. Le Man was a fixture in the starting side for Brisbane’s first two seasons but only played a handful of games thereafter.

Le Man won BRL premierships with Easts in 1983 and the final top-tier title with Brothers in 1987.

Galea joined the Adelaide Rams and played a further 19 games for them over two seasons.

Mitchell Dodds (77) – 2010-2015. 38 wins, 37 losses, three tries. Three finals, two wins.
Mitchell Dodds was an honest toiler for Brisbane for six seasons, culminating in an appearance from the bench in their famous one-point grand final loss to North Queensland in 2015.

Dodds mostly started from the bench. His best season was possibly his first in 2010, making 23 appearances. Two of his three career tries were in the one match, against the Gold Coast in 2015.

Kenny split his time between the front row and the bench over seven seasons with the Broncos and gave honest service amid some terrible runs with injuries, including back surgery and three torn calves in a single season.

His best season was 2009 when he started in 21 games and played in the Broncos’ finals campaign, which ended in a 40-10 beating in the preliminary final against Melbourne.

Kenny was voted clubman of the year and was selected in the Kangaroos’ train-on squad that year. Being part of the Broncos’ leadership group and being a finalist for the Ken Stephen Medal for his community work shows why Kenny gets the nod ahead of Matt Lodge.

Given the hard knocks he took in his career, maybe it’s handy that Kenny is now a physiotherapist.

He returned to Brisbane as part of the Super League shuffle and played for the club until 2003.

Lee’s best years were 1998 and 1999, when he primarily shared the hooking role with John Plath and then Luke Priddis.

After a couple of injury-plagued seasons, Lee returned to his best as a lock and bench player in 2002, playing 25 matches.

Plath at various stages started at centre, five-eighth, halfback, hooker and lock as well as notching over 100 games from the bench in a decade-long career that produced four grand final medals, plus a World Club Challenge title.

Plath is the most capped Broncos to never play a representative match. He got terribly close one year, when he was selected to for State of Origin replace the injured Adrian Vowles but then did his shoulder the day before the match.

Plath repeated Grade 12 with a plan to make the Australian schoolboys rugby union tour, but was beaten out by two fairly average players in Tim Horan and Jason Little. His first Brisbane contract had to be redone as it was made out to ‘John Plant’.

Seymour bounced around at least ten clubs across Australia and England during a long career. Unfortunately, Seymour’s problems with depression and alcohol followed him and he was also let go by Cronulla and Auckland.

Seymour was still kicking around in 2019, as coach of Valleys in Toowoomba where in 2018 he kicked the winning goal to clinch the Toowoomba premiership for the Roosters.

Andrew Tessman (34) – 1988-1992. 21 wins, 13 losses, one try.
Andrew Tessman had a promising career cruelly cut short by injury, when he almost had his leg amputated after being hit by a limousine.

This cost the young forward the entire 1989 season after he had forced his way into the Broncos’ star-studded line-up in just Round 6 of their first year. Tessman returned in 1991 but was never the same player.

Scott Anderson (51) – 2010-2013. 25 wins, 26 losses, no points. Three finals, two wins.
Scott Anderson was picked up from Melbourne. He alternated between the front row and bench over a four-year career, including participating tin the 2011 finals series when the Broncos made it to a preliminary final.

Anderson finished his career with Wakefield in England.