Tom Stewart had 40 disposals and 14 marks at GMHBA Stadium on Saturday afternoon. In SuperCoach terms, that translates to 187 ranking points.

While it wouldn’t be fair to say Fremantle won the game because of that stat line – Stewart was so far and away Geelong’s best it wasn’t funny – that he dominated to that extent was a sign that, for all Stewart’s excellence, the Dockers had the game on their terms.

For the first fifteen minutes, though, the Cats barely needed him. Winning 11 of the first 14 clearances and steaming forward with ruthless intent, the Dockers’ defence, touted as the second-best in the competition behind (of course) Melbourne, were looking like most backlines do when under siege: vulnerable.

The strength of Tom Hawkins, the craft of Tyson Stengle and acres of space inside 50 (we’ll talk about the other Acres in a sec) were all on display in equal measure. With five of the first seven goals, it seemed the Cats were set to do what they’ve done to so many interstate teams who come to their turf with hopes of taking them down.

Okay, it’s probably not fair to lay the blame on the Cats, because the Dockers, after that shaky start, were supremely disciplined without the ball and nothing short of fantastic with it. In close, they wrested control of the clearances, with David Mundy’s quick hands proving that metres gained might just be the game’s most overrated stat; on the outside, they ran hard, took the game on and kicked beautifully.

Blake Acres has never had a better game than he did patrolling the ‘Stephen Hill wing’ (every Freo fan knows which side of GMHBA that is), with 27 disposals and more drive than a Michael Hussey innings. Caleb Serong, too, was just as good as at any point since his phenomenal Rising Star year of 2020.

Maybe that’s the reason why the Cats stopped trying to run through the corridor, and instead opted to, when in doubt, just kick it back to Stewart. Because for one and a half quarters, that’s exactly what they did.

None of this is a knock on Stewart, who is the safest ball user in the Cats’ back six, always finds space to present as an option, and whose final quarter was just outrageously good as he decided to take matters into his own hands.

But if your half-back is racking up the stats while you’re managing a solitary point in a quarter and a half of footy, something has gone badly wrong. From the 28-minute mark of the first term through to the 20th minute of the third, the Cats went goalless: as good as Freo undoubtedly were, the Cats shouldn’t be doing that, let alone on home soil.

The Dockers were just fine with the Cats kicking backwards and sideways to Stewart at every passing opportunity: it gave them time to set up their now formidable defensive structure. It meant when the Cats did manage to break past the centre circle, they found a sea of purple waiting for them.

If Tom Hawkins was too strong for Alex Pearce one-on-one, then good luck taking on Pearce, Griffin Logue and Luke Ryan at the same time, with just a hint of Brennan Cox flying in from the side. That the Cats would shade the Dockers for inside 50s by the end, 54-47, was immaterial: against Freo these days, getting it in there is the easy part (and it’s not actually that easy to begin with).

Realistically, only the Cats’ accuracy in front of goal in the opening term kept the contest as close as it was for much of the game. Unsurprisingly as well, when the Cats decided to throw caution to the wind in the final 15 minutes, things started to happen for them.

Unfortunately for them, they were 23 points in arrears when it clicked.

If Stewart didn’t play, the Cats could and would have lost this game by more, as they did during last year’s finals series when he was injured. But few teams – and Geelong are one of them – will win many games when the half-back is getting to 40.

This style of short kicking, marking and painfully slow progress was reminiscent of the old Geelong from 2019-21, which could never translate their strategy to finals, especially against Richmond. It’s once again proven insufficient to deal with a genuinely good team – and now, it’s not even good enough to win at their home fortress, the ground on which the chipping plan seems custom made for.

If a passage of play summed up the game, it was this one.

What the clip doesn’t show you is that the Cats chipped the ball around half-back for a solid minute beforehand. The Dockers sat back, relaxed, and when given an opportunity, took full toll.

It was brilliant by Fremantle – but a real problem for Geelong. 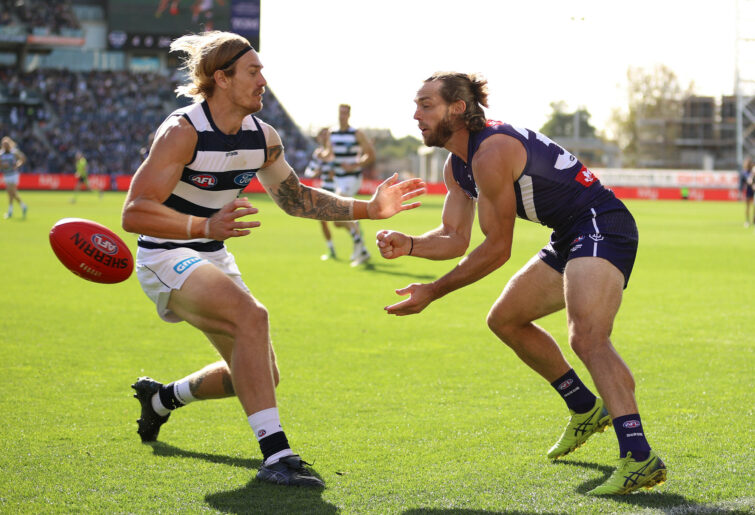 Speaking of teams reverting to old habits, GWS did much the same thing against Adelaide – except for them, it was a good thing.

Most people would have backed the Crows off a stirring run of form; but, just as they did last year, the Giants stormed Adelaide Oval with an old-fashioned Orange Tsunami – and the Crows didn’t have a life jacket.

You could have been forgiven for thinking you were watching a different team from the one that sputtered and stop-started its way through a loss to St Kilda last week. The Crows were completely dismantled early, then toyed with for the rest of the match, as the Giants surged back into form.

It’s almost as if a collective lightbulb went on above the Giants’ heads, and they all realised during the week: “Hey, we’ve got Toby Greene, Jesse Hogan and Harry Himmelberg in forward 50. Why don’t we try and get it down to them as quickly as we can?” They did that, and the results spoke for themselves.

When Greene gets a mismatch, few players in the competition are better equipped to tear it to shreds. He had Luke Brown’s measure both at ground level and in the air, with his footy smarts on constant display too.

With four first-half goals, he feasted on the supply his midfielders gave him, while Jesse Hogan, who was given far too much space by Billy Frampton after presumably being mistaken for Jamarra Ugle-Hagan, was equally damaging.

He finished with three, and could have had more but for some errant kicking. But just as eye-catching was his work upfield, running the wings to provide a get-out option. Together with Braydon Preuss, who might as well be a reincarnated Shane Mumford but even stronger overhead, Hogan made sure the Giants ruled the skies.

Perhaps the three most maligned Giants in recent years have been Josh Kelly, Stephen Coniglio and Lachie Whitfield. There’s a real argument that trio were the best three afield, as they racked up possessions, delivered it with trademark efficiency and impacted the scoreboard.

Whitfield’s fall into anonymity has been apparent this year, but playing forward of centre more than he has all year, he was a major beneficiary of the Giants’ toughness in close. He’d kick three goals with his usual class, and I was shocked to see he had only nine kicks for the match, because just about all of them found their target.

Coniglio bagged three as well, with his willingness to work hard and push into space in attacking 50 bearing fruit. For the first time, it looked as though he didn’t need to be a permanent on-baller to have a major influence.

Last but not least, Kelly was enormous. With 41 disposals, it’s clear that he remains one of the very best players in the game when at full flow. Smooth-moving, with a left foot out of a textbook and all the footy smarts in the world, getting the best out of him has been a constant pain for Leon Cameron over the last three years. Who could have thought playing him on the ball all game would reap such rewards? Shocker.

The Crows weren’t even that bad; they just offered precisely zero resistance until the margin touched 80. It wasn’t West Coast level bad, gifting turnovers; they even broke even in the clearances for much of the game.

But once the Giants got the ball, be it at half-back, half-forward or somewhere in between, they had no clue how to get it back.

As for the other games? Melbourne kept on Melbourning while Hawthorn tagged just about everyone they could – and it worked to the point that they finished just 10 points in arrears. But for some key final-term misses (though Melbourne could have said the same), they might have been able to make a real game of it.

Finn Maginness stuck to Ed Langdon like glue from first bounce to last, and while the results were excellent – Langdon would have just nine touches – I can’t help feeling like Angus Brayshaw on the other wing would have been a better option to try and nullify.

While Langdon’s running power is his claim to fame, Brayshaw has footy smarts to spare, and with 26 touches and 10 marks, he was on hand to get the Dees out of trouble time and again. Overhead, too, he’s a greater threat in defensive 50 than the former Docker, too.

Conor Nash sat on Clayton Oliver after a rampant start, then switched to Christian Petracca, then did a hamstring and was subbed out. Whoever he was on would go cold; whoever he wasn’t burned like the sun. Someday, a team will genuinely try tagging every single Demon, and while it probably wouldn’t work, it would certainly make for an interesting contest.

Really, the difference was Max Gawn, who gave Max Lynch a wholly expected thrashing, marked everything around the ground and clumped through goals from outside 50 as well. 29 touches, 35 hitouts, six marks and two goals actually don’t do his performance justice – big Max was ridiculous.

In the evening session, the Blues did what they liked after half time against North Melbourne, who seemed at times more interested in picking fights than keeping the scoreboard respectable; while Port Adelaide gave new meaning to ‘winning ugly’ in Carins over St Kilda by a solitary point

Yes, it was a thrilling finish – and Robbie Gray was clutch at the death – but in slippery conditions, you’d have to be a glutton for punishment or a Power diehard to want to watch anything other than the final ten minutes again.