'How bad do yers want it?': Addo-Carr reveals how Gus put rocket under Bulldogs in midweek rev-up

Bulldogs winger Josh Addo-Carr has revealed what the Dogs were telling each other in the final moments of their famous win over the Roosters on Saturday night – and what Phil Gould’s messaging was in the controversial midweek training session.

Speaking in the sheds after the 16-12 victory, the Fox told The Roar that, with a four-point lead and time running out, he was screaming at his teammates from the wing to make sure they kept their heads and grabbed the points.

“And it showed in Matty Burton’s effort. We could have easily got a penalty, they didn’t give it and he made that effort to take Joseph Suaali out. That’s what a Bulldog does.”

Furthermore, Addo-Carr said that the message he was giving his teammates was the same one that the Bulldogs’ GM of Football had delivered in the week.

There had been controversy throughout the leadup to the game about revalations that Gould had been taking training sessions at Belmore, with many feeling that his doing so impinged on the authority of head coach Trent Barrett.

But Addo-Carr felt – as Barrett had said to the media several times – that Gould was perfectly placed within the club to pass on experience and build the culture.

“That’s what we’ve been taught the last couple of weeks off Gus: what it means to be a Bulldog. It’s those little effort areas that nobody sees,” said the winger.

“Gus is coming in and showing us the little effort things that people don’t see. Gus has been in this game for a very long time and he’s showing the team how to build culture, showing us things that the media and the fans don’t see. That’s what we see.

“He comes in and helps. It (the media story) is a big overreaction. There’s nothing to it, really. Gus is part of the club, so why can’t he take over the session?

“He didn’t really take over, he just ran the session. He’s part of the club, it’s not like he came in from the outside to take over. It’s a big nothing really.”

Addo-Carr, who moved from Melbourne Storm in the off-season, is revelling in being a leader at the Dogs and taking on a greater responsibility from his station out on the left.

“It’s showing energy when you’re tired,” he said. “I’m sitting on the wing so I don’t make too many tackles but I’m trying to get my forwards and everyone to work hard.

“As everyone knows, my mouth doesn’t shut. I don’t shut up and bring that energy on the field. The forwards are making 30 or 40 tackles a game and it’s won in the middle. I thought they set a standard that we need to keep.” 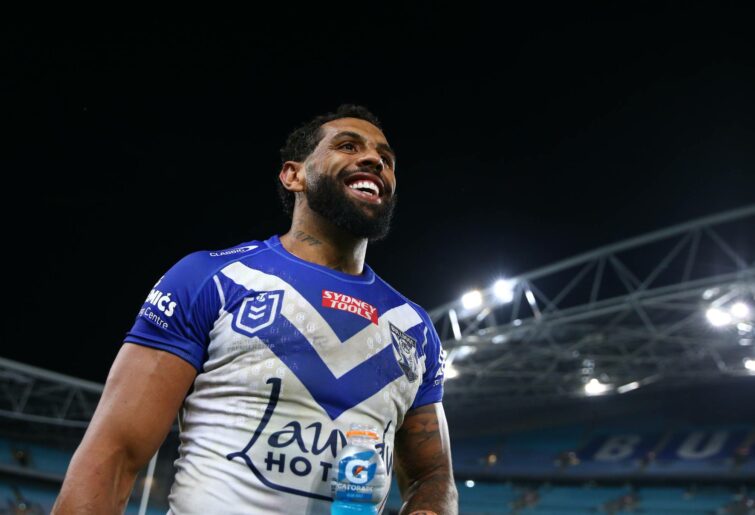 That energy has paid off. With regular captain Josh Jackson stuck in COVID-19 isolation, Addo-Carr has taken on that role along with English prop Luke Thompson.

“I feel that I earned the right to be captain when Jacko got COVID,” said Addo-Carr. “I felt I earned the respect of the boys to become captain along with Luke Thompson.

“If you earn the respect of the boys, you listen. I didn’t change nothing in my game, I just keep doing what I have been doing and the boys followed.”

“The Roosters are a real quality side and have some of the best players in the world in their team. If we put the effort in and believe in ourselves we can beat any team.

“You need to win the little things in games. The last couple of weeks, through soft tries and that sort of stuff, has been really deflating. That’s why we’ve been losing games.

“We’ve been in front the last couple of weeks and need to win the little things. We need 13 individuals to do their roles so that we can have confidence to do our own roles.

“That’s the biggest things that I can bring to this club and teach them. I thought we did that tonight. We didn’t rely on anyone else to do their job.

“We’re heading in the right direction and playing smarter footy. We’re putting the effort in on the field and it’s key moments in games that we need to fix, and I feel like we’re fixing it.”