matth
Roar Guru
2nd May, 2022
41
Join the conversation
Advertisement
Write for The Roar

The criteria for selection is:
– No representing at senior level: internationals, State of Origin, City/Country, PM’s XIII or All Stars
– Current players are excluded
– Players are only eligible for the club where they played the most first-grade games

Melbourne have arguably been the most successful side across the NRL era.

They have had plenty of superstars since their establishment in 1988, but they have also built a reputation of turning journeymen into valuable assets.

It turns out that only really applies to their forward pack. The backs are very skinny indeed.

Junior Langi (34 matches) – 2001-2003. 11 wins, 22 losses, six tries
Junior Langi is the only non-rep player to start more than ten times at fullback for the Storm, except for Ryan Papenhuyzen, who will surely get there at some point.

Langi had a limited number of starts with St George Illawarra before heading south. His 34 appearances for Melbourne were split between fullback and centre.

After leaving Melbourne, Langi spent a year at Parramatta before heading to the English Super League with Salford. Tragically Langi had to retire at just 25 due to a rare hereditary eye illness.

Given that, I really thought there would be more than 20 matches for the club on his CV.

Smith played two matches for North Sydney in 1995, including scoring a try as a five-eighth in their qualifying final loss to Newcastle that year.

After two years in the wilderness he re-appeared for the newly formed Melbourne Storm in 1998 as a goal-kicking winger and led the club’s scoring that year.

The following year he only played three first-grade game for the club: the semi-final, preliminary final and grand final. His last act for the club was to be knocked unconscious.

This was after scoring a double in the final regular-season match.

Tomane then joined the Gold Coast for a couple of years, playing 14 games. His career strike rate of scoring 20 times in 32 matches is top shelf.

After finishing with the Gold Coast, Tomane defected to rugby union and played 17 Tests for the Wallabies.

He then spent three years at Melbourne, switched back to England, then returned to the NRL with the Warriors before heading back to England to play a total of 17 years at the top level, turning out more than 300 times and crossing for more than 100 tries.

The cupboard is truly bare in the halves for Melbourne. The only player to spend significant time in the halves and not represent is Blake Green, who unfortunately played five more games for the Warriors.

Nicho Hynes only played in the halves three times for Melbourne, plus he feels a bit like cheating. So at five-eighth, we are left with…

Anderson enjoyed a winning record for the Storm, but never really cemented a first-grade spot. His career finished with his father dropping him from the side after they lost the qualifying final to St George Illawarra in 1999.

Matt Geyer was turned into a number six and a premiership was won.

Anderson later spent some time coaching in Queensland Cup, taking the Tweed Heads Seagulls to a grand final, as well as the national under-20s competition and country football.

To show there are no grudges over 1999, Anderson works in the family recruiting business as an account manager.

It hurts to leave out 100 gamer Matt Orford, but he unfortunately played three games for NSW City when this was still a thing.

So there only remains the terrible choice between Riley Jacks and Brodie Croft. But then I noted that Jacks has played twice for Canada. 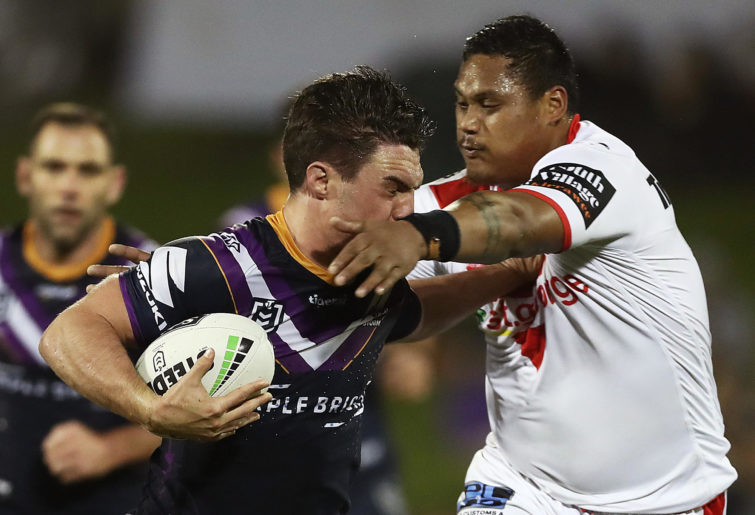 Despite having all the skills and Melbourne experiencing plenty of success under his watch, Craig Bellamy made the decision to move on from Croft on the eve of the 2019 finals.

Jahrome Hughes took over and never looked back, leaving Croft to move to Brisbane at exactly the wrong time, being expected to lead a struggling club at only 22 years old.

Croft is now plying his trade for Salford in the English Super League. At just 24, he still has plenty of time to forge a successful career.

Lowrie is one of those classic Melbourne Storm stories. He joined the club in 2010 after seven years with Newcastle and then Parramatta.

His time at the Eels had culminated in the 2009 grand final loss to the salary cap souped-up Storm.

The lock forward played at least 19 games each season for the next three with Melbourne, starting with their season for no points in 2010 and finishing with a premiership ring in 2012. Lowrie showed toughness, playing that match with a torn calf muscle.

Lowrie finished his career with a season each at the Warriors and Broncos. Since then he has coached Newcastle at under-20s level, led his former junior club the Scone Thoroughbreds to a local premiership and is currently coaching Wests Rosellas.

Stimson was in the starting line-up for the 2018 grand final, when the Storm were beaten by the Sydney Roosters.

After spending the first half of 2019 out of the side and the second half on the bench, in 2020 Stimson moved to strugglers the Bulldogs but has enjoyed only limited success, badly injuring his shoulder on debut and only playing 16 games to date over three years.

Glen’s brother Marty also came over from Christchurch and debuted for the Storm in 2002.

After a fairly nondescript six-year career across St George Illawarra, Penrith and Cronulla (60 games – no tries), Norrie was heading to the Wagga Wagga Kangaroos when he was picked up for a song by Melbourne.

Norrie went from primarily a bench player who had never played more than 16 games in a season to a starting prop that only missed six games in his four years at Melbourne.

The Forbes product retired in 2014 due to a neck injury as one of the Storm’s most respected players. He then became a firefighter – more respect.

But Norrie threw all that love and respect away to take on the thankless task of officiating in the NRL bunker on its introduction in 2016.

After four years with the Storm, Roarty played on for another five years, firstly at Penrith and then in England where he captained Huddersfield.

The playing bug was still alive and over the next few years, Roarty played in the Victorian and NSW Group 20 leagues.

Since retiring, Roarty has been a fitness trainer, youth worker, prison warden, a school fun run organiser and a strawberry farmer out at Echuca. He also married a former Storm cheerleader.

Russell Aitken (10) – 2007-2008. Three wins, seven losses, one try, two finals, one win
A certain Cameron Smith has dominated this position for the Storm, so there is not a lot to choose from.

Ironically, this sees Russell Aitken filling in for Smith once more, after doing so to less than stellar effect in the club’s famous 2008 grand final flogging at the hands of Manly.

Aitken was primarily a half who played a handful of games for Cronulla between 2003 and 2005. After being picked up by the Storm he only appeared for a few games in 2007 and 2008 as a fill-in wherever needed.

Unfortunately, where he was needed was as hooker to replace one of the greatest players of all time. Aitken didn’t play too badly and the club blew the Sharks away to reach the grand final only to run into the unstoppable Sea Eagles on grand final day.

Aitken never played for the club again, heading to France with AS Carcassonne and then to the Gateshead Thunder in the English Championship, until they went broke.

That left him back in Sydney playing for Newtown, before returning to France to finish his playing career. Aitken currently coaches St George Illawarra in the NSW Cup.

After retiring, he has worked in development roles for the club for many years, preparing players for life after football.

He played three seasons at the Storm before spending a further four years in the NRL with Newcastle and then St George Illawarra. Reynoldson managed to play finals footy with all three clubs.

His career with Newcastle ended on bitter terms, when coach Brian Smith refused to play Reynoldson in the last games of the season to prevent triggering a further year on his contract.

The under-10s in Reynoldson’s home town, Wandoan in country Queensland, play a carnival each year against visiting teams for the Kirk Reynoldson Cup.

Once when the Storm traveled to play the Broncos in Toowoomba, Reynoldson gave discounted tickets to anyone from Wandoan who wanted to come along.

Over 250 turned up out of a town population of around 430. Reynoldson also arranged for 150 kids from his old Toowoomba boarding school to attend the match. Unfortunately the Broncos won the game 14-10.

Crossman had a brilliant win-loss record at the Storm and played in two finals wins across 2006 and 2007 without getting invited to either grand final.

This was particularly tough in 2006 when he had played 21 matches during the year.

After leaving Melbourne, Crossman had a season for Hull Kingston Rovers in the English Super League, before returning to Australia to line up for Souths between 2009 and 2010, although he spent most of his time playing for the North Sydney Bears in the NSW Cup.

On current form I also wouldn’t expect Hynes to eligible for this sort of list for much longer.