ANALYSIS: How Australian rugby came back to life at Leichhardt Oval

To paraphrase a famous saying of the English playwright Oscar Wilde: To lose one game may be regarded as a misfortune, to lose two looks like carelessness. At least, that is the way it must be looking to Crusaders fans right now, and to supporters of New Zealand rugby in general.

Two weeks ago, the redoubtable men in red ‘n black conceded at home to their arch-enemies from the north island, the Blues, for the first time in 18 years. Last weekend they lost to the New South Wales Waratahs, a team they had beaten at the Wollongong Showground by 54 points to 23 one short year ago.

The Crusaders have provided the backbone of All Blacks squads for as long as anyone can remember. The strength of their rugby culture, their coaching environment and the ease of its translation to the national side was summarized neatly by the Wales ex-international wing Mark Jones, who spent a season at the franchise in 2020 as defence coach:

There are worrying signs that the sense of alignment is breaking up. Sir John Kirwan, on Sky Sport NZ’s The Breakdown recently proposed a national side with only one Crusader (Will Jordan) in it. While the All Blacks’ selectors are unlikely to cut such a swathe through the established ranks, there is little doubt that New Zealand as a rugby nation has arrived at a tipping point, where the values of the professional past are now in serious question.

New Zealand’s loss is Australia’s gain. The Aussie franchises reversed most of the trends of the opening round of cross-border competition, winning two and losing two, and transforming a minus 15-point average losing margin to plus 3.5 in the process. Just how far New Zealand has fallen, and how quickly Australia is rising will be revealed more clearly in the final four rounds, with Aussie sides having to play matches in the shaky isles for the first time in 2022.

The Brumbies won their second game on the bounce, beating the Hurricanes by 42 points to 25 on Sunday afternoon, but the most significant result was undoubtedly the success of the Waratahs at the Leichhardt Oval, turning over the perennial class leaders from Canterbury.

The most promising sign for Australia is that the resurgence is beginning where it really matters, up front. The Force’s Friday arvo comeback was ignited by monumental effort at the defensive lineout from Izack Rodda, forcing five turnovers and one other significant disruption in the second half against the Blues. The Brumbies followed Rodda’s lead by scoring two tries from their patented lineout maul, and by releasing Nic White around the edges of the ruck versus the Canes on Sunday.

The meat in the sandwich was the performance of the New South Wales back five forwards against the Crusaders, where Jed Holloway, Michael Hooper and Charlie Gamble were outstanding. All three comprehensively outplayed their opponents on the day – players with either an established international reputation (Sam Whitelock and Pablo Matera), or one of the most highly-touted young number 7’s in the land of the open-side connoisseur, Tom Christie.

Darren Coleman shrewdly followed the template for selection set as long as ago as 2019 by England in their World Cup semi-final win over the All Blacks. In Yokohama, Eddie Jones picked two men in the second row who had played international football at number 6 (Maro Itoje and Courtney Lawes), with two natural number 7’s behind them (Sam Underhill and Tom Curry).

DC channelled Eddie by pairing Holloway (a number 8 in his previous life in Sydney) with Hugh Sinclair in the row. Sinclair played mostly on the blind-side flank for New South Wales in the domestic portion of Super Rugby Pacific 2022. Meanwhile the regular open-side flanker, Charlie Gamble, was moved over to the other side of the back row to accommodate the return of Wallaby captain Michael Hooper.

With that combination on the field, the Waratahs were able to hurt the Crusaders at their greatest point of strength, in the brutal collisions that occur in and around the point-of-contact. When play remained above ground in the tackle and at maul-time, Jed Holloway was a dominant, immoveable force; when it went to ground, Hooper & Gamble swarmed to the ball as enthusiastically as a pair of solicitors calculating their billing hours.

First, the raw stats. Holloway (14 out of 15), Hooper (a perfect 16 completions from 16 attempts) and Gamble (17 out of 18) were the top three tacklers in the game. Holloway had two maul turnovers and a third significant disruption, with two more lineout steals in the red zone. Charlie Gamble had three tackle turnovers and one forced fumble, while sharing a second with Holloway, his comrade in arms.

Charlie Gamble has been one of the unheralded success stories of the Super Rugby Pacific season, finishing either top, or close to it, in every category that matters for an open-side flanker in the domestic portion of the tournament. With his unbridled mane of black hair and a dense brushwood moustache twitching beneath it, he looks and plays somewhere between Mexican revolutionary Emiliano Zapata “El Atila del Sur” (“the Attila of the South”) and Old Testament Samson in the desert, swinging and smiting as he goes.

The combination of Hooper and Gamble was always likely to yield the typical dual open-side bonuses to the game on defence: for one, the classic tackle-and-jackal:

For two, the easy width on defence with both Hooper and Gamble able to wrap effortlessly around the corner of the first ruck from lineout:

When the Crusaders try to move the ball wide on second phase, Gamble has already shifted over the far 15m line, and is able to make a power tackle on David Havili with the assistance of Mark Nawaqanitawase. Hooper and hooker Mahe Vailanu are primed to pick up the pieces on the deck when the ball is thrown back, more in hope than expectation, from the side-line.

As that instance shows, Charlie Gamble has the power to tackle high and dislodge the ball in contact, and a strong enough base to stay low and hang tough on the jackaling attempt which eventually won the game for New South Wales:

Meanwhile Jed Holloway was a tower of strength when the ball stayed above ground, and he plays very ‘heavy’ indeed at the point of contact in tackle and maul: 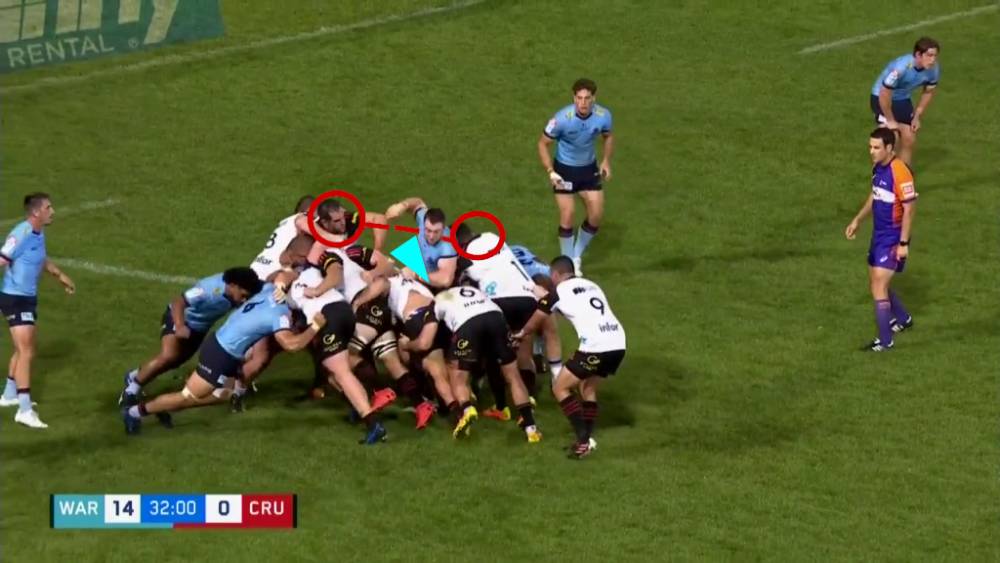 Holloway has the brute strength to split the two frontal blockers in both examples – Sam Whitelock and George Bower in the first, Oli Jager and Cullen Grace in the second – penetrate on to the ball-carrier, and stuff the drive. It is a remarkable transformation for a player who started life as a rangy number 8 who was known to drift in and out of games. Now Jed Holloway is at the heart of the nitty-gritty, and at the epicentre of the tight grind.

The power pyramid of Holloway, Gamble and Hooper – and their effectiveness working in combination – was too much for the men from Christchurch on the day:

Holloway pops Grace and Whitelock out of the blocking wall before moving through to sack Codie Taylor. That means slow ball, more defenders in the line, and the chance for Hooper to initiate a strong counter-ruck on Matera at the next phase.

First Michael Hooper takes care of the width of the field on the initial phase of a kick return, then Jed Holloway is able to make a dominant choke tackle on Zach Gallagher fully 15 metres behind the ad-line a couple of phases later, and the attack is dead in the water.

Round two of the cross-border competition showed that rumours of Australian rugby’s imminent demise have been exaggerated. The score-lines were all close, except for the game between the Brumbies and the Hurricanes, which the men from Canberra won by a handsome 17-point margin.

Australian teams won three round 11 games on their long journey back to respectability, and the three victories against Kiwi opposition is already one more win than in all 25 games of Super Rugby Trans-Tasman. Crunch-time approaches, with the balance of games transferring back to Aotearoa in week 12.

The real underlying question is analogous to the one that besets all professional referees at the minute: is Australia on the rise, or is it New Zealand who are dipping their standards and ‘falling into the tackle’? It will need a few slow-motion replays over the remaining rounds to decide the answer to that one.

There is little doubt that the Crusaders are not the force of old – maybe not even the force of 2021 – but are the Blues to take over as the standard-bearers of Kiwi provincial rugby? Once more, the shroud of fog prevalent in the Southern Hemisphere game as a whole, hangs heavy in the air, and we simply do not know.

Despite a persistent weakness in the final quarter, the good news for Australia is that their forwards are showing up in the contact areas. Izack Rodda led the fightback on Friday in lineout defence, and the Force lost only three of the 138 rucks they set.

The likes of Bobby Valetini and Scott Sio topped it off on Sunday as the Brumbies dominated with the maul, and with accurate cleanouts to release Nic White around the edges of the ruck. In between, Jed Holloway, Michael Hooper and Charlie Gamble triangulated to great effect on defence at the Leichhardt Oval on Saturday evening: Holloway up high, Hooper and Gamble down below. It may not be rugby nirvana, but it is a great deal better than what has gone before.