The Roar
4th May, 2022
15
Join the conversation
Advertisement
Write for The Roar

Swans legend Adam Goodes will not be part of the 2012 premiership team’s SCG lap of honour on Saturday for what would have been a rare public outing at his former sport.

The Sydney side is holding a 10-year reunion this weekend with all but four members of the squad set to embark on a lap of honour before forming a guard of honour to welcome this year’s team onto the field for the clash with Gold Coast.

Goodes has a prior family commitment so he is unable to be in attendance at the game but will be part of the private functions the 2012 team is holding on Friday and Saturday night, according to a report in The Age.

The 372-game legend has consistently brushed events organised by the AFL since he walked away from the sport in 2015 disillusioned by the racially motivated boos he copped from rival fans.

A two-time Brownlow Medallist, he continues to have an affinity with the Swans after they backed him to the hilt through the controversial booing incidents which plagued the later parts of his career.

He partnered with former teammate Michael O’Loughlin to launch the GO Foundation to help Indigenous education.

Last year Goodes made headlines when he turned down an invitation from the AFL to be inducted into the Hall of Fame because he no longer felt a love for the game. 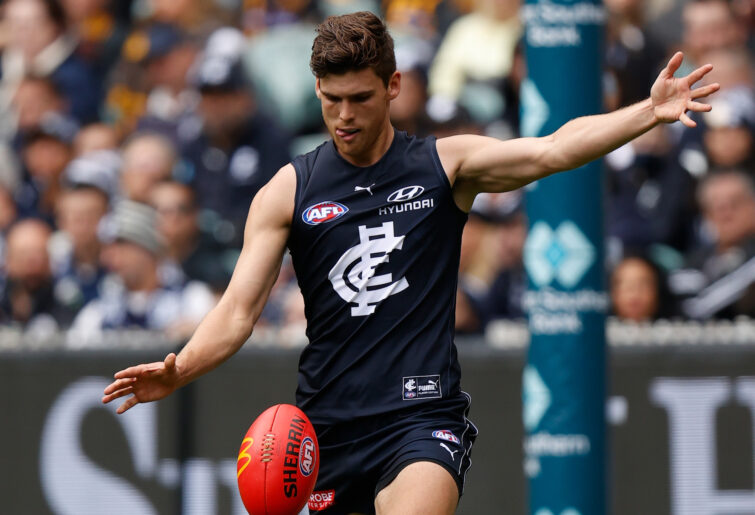 The former Western Bulldogs player’s charge of forceful front-on contact was thrown out by the tribunal on Tuesday night, meaning he can line up against Adelaide at Marvel Stadium on Sunday.

The match review officer graded the incident as careless conduct and high impact to the body.

But the tribunal panel found the charge could not be sustained after Young gave evidence during a 90-minute hearing.

“I had to make a split second decision to bump and try to get as low as I possibly can and protect Zurhaar’s head,” Young told the tribunal.

“Zurhaar is a bit like a raging bull and attempted to go through me.”

GPS data showed Young had slowed right down at the point when he collided with Zurhaar.

“Zurhaar’s a very courageous player and known for his forceful style and he chose to barge through Young,” O’Farrell said.

“He couldn’t tackle because Zurhaar didn’t have the ball so he had no other options but to brace for the raging bull.”

The AFL’s legal counsel Andrew Woods argued Young could have avoided a collision with Zurhaar altogether.

“What I submit is Young slows his body in a manner that makes forceful contact and one of the things he could have done to avoid contact is he could have veered to his left and accelerated out of the contest,” Woods said.

Carlton decided to accept a one-game ban for Liam Stocker after he was charged with engaging in rough conduct against North’s Tarryn Thomas.

The Kangaroos opted not to appeal a one-match suspension for full-forward Nick Larkey, who was charged with tunnelling Young during the third quarter.

The Brisbane Lions are breathing a sigh of relief with spearhead Joe Daniher avoiding shoulder surgery but still set to miss between four and six AFL games.

The worst-case scenario for the premiership fancies would have been Daniher requiring an operation, potentially ending the key forward’s season.

The former Bomber was subbed out of Brisbane’s important win against the Sydney Swans at the SCG on Sunday due to the injury.

“The outcome today is a fairly good one with Joe not requiring surgery on the shoulder and we can just focus on rehabilitating and getting strength back into it,” Daly said. 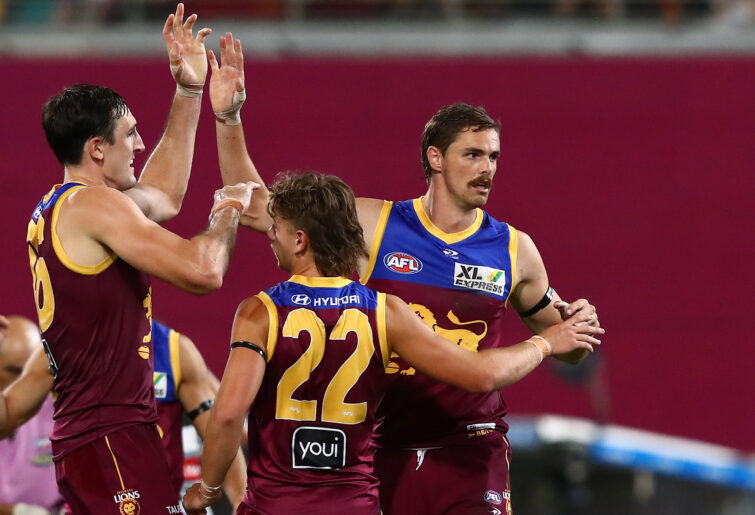 “While it is disappointing for Joe to miss a few games after stringing together so many consecutively, we’re confident we have the forward line depth to cover it whilst he focuses on getting back on the park.”

Daniher has enjoyed an outstanding start to his second season with Brisbane, kicking 19 goals in six games after 46 majors last year to remain just three behind Coleman Medal leader Tom Hawkins of Geelong.

Chris Fagan’s side will soon regain fellow important forward Eric Hipwood after almost a year on the sidelines due to an ACL surgery.

Geelong star Patrick Dangerfield is fully fit and will return in the AFL clash with GWS after sitting out two games with bleeding in his calf, coach Chris Scott says.

The veteran midfielder missed matches against North Melbourne and Fremantle when he was unable to complete the required amount of training.

The Cats will welcome him back to face the Giants in Canberra on Saturday.

“It’s clear that he’s an important player in our team,” Scott told reporters on Wednesday.

“We think he’s ready to play whatever role he and we choose.

“If we thought that he had to come in and play limited minutes in the midfield or more forward because of his body, then that’s a good cue that he’s not quite right to perform.”

Fremantle’s COVID-19 outbreak has grown to six players with Griffin Logue, ruckman Lloyd Meek and forward Michael Frederick the latest players to be ruled out.

Forward Rory Lobb, Blake Acres and Travis Colyer were forced into the health and safety protocols earlier this week and they have since been joined by Logue, Meek and Frederick.

Dockers coach Justin Longmuir is cautiously optimistic there will be no further players ruled out for Friday night’s clash with North Melbourne at Optus Stadium.

Longmuir confirmed last year’s No.8 draft pick Jye Amiss will debut after booting a combined eight goals in his past two WAFL games.

Fremantle have taken extra precautions in a bid to avoid COVID-19 this season, but Longmuir feels their trip to GMHBA Stadium last week — to post a famous three-point win over Geelong — was the likely source of the outbreak.

McGovern had been pushing for a recall after being sidelined since round two but injured himself again last week.

The 27-year-old will miss between 10 and 12 weeks and might struggle to play again this season.

Struggling Essendon have also been rocked by a hamstring injury to playmaker Jake Stringer.

The dynamite midfield-forward will be out for up to four weeks after injuring his right hamstring, the different leg to the one that caused him to be sidelined earlier in the season.

Luckless Melbourne defender Joel Smith will undergo surgery after injuring his ankle in the Demons’ win against Hawthorn. Smith will miss eight to 10 weeks after fracturing a bone on the inside of his ankle.

Fellow defender Michael Hibberd has suffered a minor setback as the veteran attempts to overcome a persistent calf injury.

Hibberd has not played an AFL game since last year’s grand final and will have to wait a bit longer to feature at VFL level for the Dees.

The Hawks will again be without key forward Mitch Lewis, who has suffered a non-COVID-19 related illness after missing the clash with Melbourne due to a hamstring strain. Lewis, and exciting defender Changkuoth Jiath (hamstring), will sit out Saturday’s clash with Essendon.

West Coast great Peter Sumich predicts it could take up to four years for his former club to become a finals contender again, but he has a plan for how they can reduce the rebuild pain.

Sumich believes premiership coach Adam Simpson deserves the chance to lead the rebuild, and said trading away the club’s ageing stars may no longer be worthwhile given their reduced currency.

Veterans Josh Kennedy and Shannon Hurn are expected to retire at the end of this season, while Nic Naitanui (32 years old), Luke Shuey (31), Jack Redden (31), Jeremy McGovern (30), Jamie Cripps (30), Jack Darling (29) and Andrew Gaff (29) are entering the twilights of their careers. 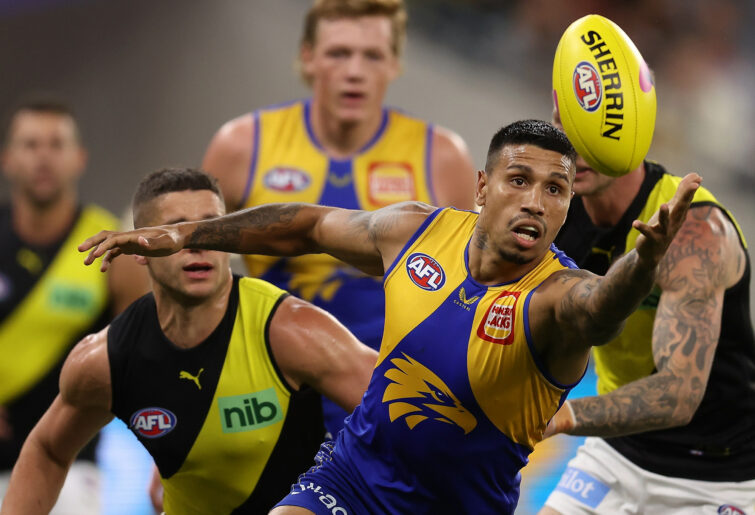 Tim Kelly of the Eagles gathers the ball. (Photo by Paul Kane/Getty Images)

Elliot Yeo is 28 and has been plagued by injuries over the past two seasons.

West Coast haven’t had a top-10 draft pick since Gaff in 2010 and they have had just five picks inside the top 20 in that time.

Their decision to give up two first-round draft picks for Tim Kelly at the end of 2020 further deprived them of young talent.

Talk has swirled about the prospect of West Coast landing Western Bulldogs ruckman Tim English or emerging Melbourne star Luke Jackson, but Sumich said the Eagles must now focus squarely on the draft.

“It is a proven formula, but you go through some pain with it as well,” Sumich told AAP.

“It’s going to be anywhere from two to four years of getting any squad in place that’s going to have an assault on the top eight.

“And then you need to keep going to have an assault on the top four, which will take another 12 to 24 months.”

Sumich is urging West Coast to scour the WAFL, SANFL and VFL in a bid to find some mature-age talent that can help fill the void while the club loads up on youngsters at the draft.

The AFL is weighing up whether to implement another major rule change for the 2023 season, according to general manager of football Brad Scott.…