The Roar
5th May, 2022
98
Join the conversation
1469 Reads
Advertisement
Write for The Roar

Richmond have confirmed superstar Dustin Martin will make his long-awaited AFL return for Richmond in their Round 8 clash with Collingwood.

Martin, who took a leave of absence from the club after Round 1, returned to training last week, and has been named a certain starter on Saturday afternoon by coach Damien Hardwick.

“We’re looking forward to welcoming him back,” Hardwick said on Thursday morning, clarifying that only an unforeseen mishap at that afternoon’s training would stop Martin from playing.

Martin had ramped up his training during the week in a bid to re-acclimatise himself to AFL life, reportedly doing up to 11 kilometres of running as well as boxing work as part of his conditioning.

A hamstring injury has curtailed his start to 2022, with the 2017 and 2019 grand final player not appearing at AFL level since being an unused medical sub in Round 20 last year.

Caddy was a crucial cog in the Tigers’ glorious run, either in the forward line or stationed on a wing. He played 79 games for the club after arriving from Geelong at the end of 2016, kicking 88 goals.

“Josh can walk away from his AFL career with his head held high and proud of what he has achieved,” club general manager of football Blair Hartley said in a statement.

“His skillset made us a better team throughout a successful time for our Club and we value the connections and memories made along the way.

“We wish Josh all the best for the future, he will always be a Richmond man.” 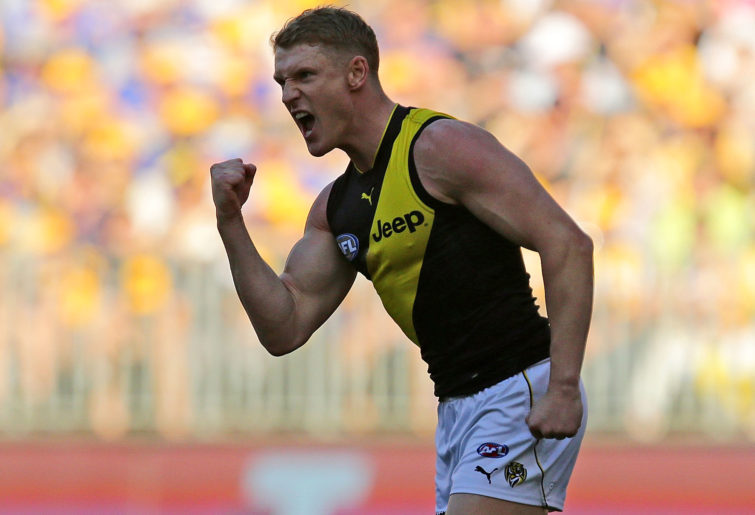 Adelaide coach Matthew Nicks has been forced into isolation and will miss the Crows’ Sunday afternoon clash with Carlton.

Assistant coach Scott Burns will become the latest caretaker coach to hit AFL level. The Crows have confirmed no other players or coaching staff members have been impacted.

“Importantly, Matthew is feeling okay, though he is obviously disappointed that he won’t be with the team on Sunday,” Crows head of football Adam Kelly said on Thursday.

“We have planned for this scenario and remain focussed on delivering a strong performance this weekend.”

The AFL has been urged to consider changing its stance on teams impacted by COVID-19, after Fremantle and West Coast were both decimated by player unavailability heading into the weekend.

Six Dockers who featured in their Round 7 win over Geelong – Rory Lobb, Lloyd Meek, Blake Acres, Travis Colyer, Michael Frederick and Griffin Logue – will be forced to miss the Dockers’ Friday night clash with North Melbourne, with the club fearing even more could be ruled out as well.

Meanwhile, Eagles coach Adam Simpson confirmed on Wednesday the club would need to use its list of WAFL top-up players for the second time in 2022, with as many as 21 players to be unavailable for their match against Brisbane due to both COVID and a growing injury list.

“Unfortunately it looks like we’re going to have 21 players unavailable this week … we’re gonna have to draw on probably a couple of WAFL players to play,” Simpson said on SEN WA.

“The challenge of trying to get the group together and improve on last week magnifies a bit more.”

In further drama, Simpson himself has entered the AFL’s health and safety protocols and will miss the game, according to Seven’s Ryan Daniels.

The Eagles have already used 42 players at AFL level this year, and were forced to use top-up players in a gallant loss to North Melbourne in Round 2.

The club’s WAFL match against East Fremantle has been postponed, due to lack of numbers for the Eagles to field a reserve side.

Speaking on AFL 360, Gerard Whateley sympathised with the Dockers having their chances of victory ‘severely compromised’, describing the AFL’s mandate on teams having to fight through major COVID outbreaks as ‘grossly unfair’.

“They are beyond tipping point I think… if you were going to run a rule of thumb what tipping point is, I reckon six out of your 22 is that,” Whateley said.

“They are going to be a severely compromised team already that takes the field on Friday night.

“They are playing a team that is in full blown rebuild mode, so it’s probably just as well. If they were facing one of the powerhouse teams, that’s compromised beyond all recognition.

“You’ve got your system, but once you pull so many parts out in all parts of the field … if you didn’t have [the current] rules … this is where you would go ‘Nup, this team is not playing’.”

However, co-host Mark Robinson said the Dockers’ situation is more than tenable, given the Eagles were forced to play in Round 2 despite an AFL record 14 changes.

“I was alarmed when the Eagles made 14 changes – they’ve [Fremantle] made six,” he said.

“I was jumping up and down saying ‘This is not right’. Fourteen? That to me was wrong.