Paul Suttor
Expert
6th May, 2022
3
Join the conversation
Advertisement
Write for The Roar

The Philadelphia franchise was once held up as the clever little poster child for tanking but at the end of The Process, all they could be left with is Joel Embiid and the biggest albatross salary in NBA history with James Harden.

Philly are at long odds to keep their playoff campaign alive after slumping to their second straight loss to Miami, 119-103, in their second-round Eastern Conference match-up.

Embiid, probably in a funky looking face mask, was hoping to return for game three at home on Saturday (9am AEST) after suffering a facial fracture in the first-round series win over Toronto, so all is not lost … yet but it appears the Sixers are going to rest him.

It would take a mammoth turnaround for the ice-cold Sixers to beat the red-hot Heat in four of the next five matches to advance to the Eastern Conference finals.

And then they face the daunting proposition of deciding what to do with Harden.

The ageing former MVP could have signed a three-year $US161 million contract extension at Brooklyn before the season and, ominously it turns out, he declined and was traded to the 76ers in the Ben Simmons deal in February. 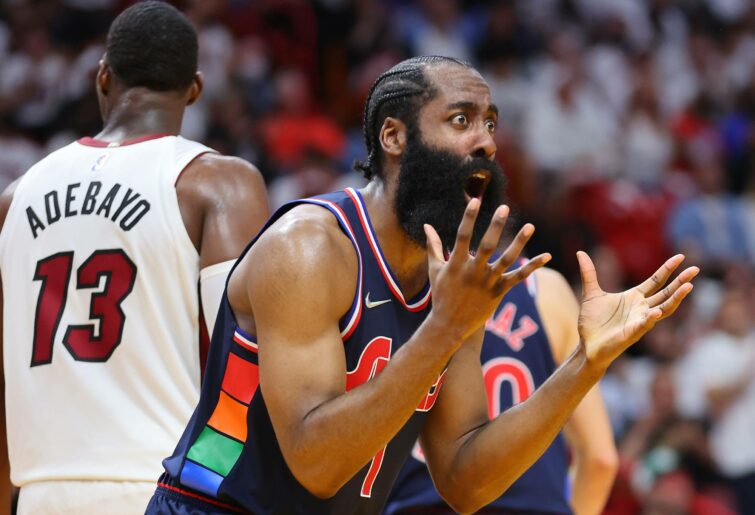 Harden has a clause in his deal – which he must exercise before the end of June prior to free agency – to opt in for next season, the last year on his existing contract, to play for the Sixers for a lazy $47 million.

He is likely to ask for a new contract at the max rate, which would mean Philly would be dishing out a five-year extension valued at an eye-watering $270 million with the 2026-27 season salary rising to more than $61 million.

By that stage he would be 37 and at his current rate of decline, be lucky to be playing to a standard to remain on an NBA roster.

At 33 he is already showing significant signs of regression.

His 22.5 for the first 44 games of this season at Brooklyn is now down to 21 at Philly and even with Embiid out against the Heat and Harden having the green light to lead the offence, he’s only put up 16 and 20 in the first two matches, outscored by Tyrese Maxey and Tobias Harris.

Harden has been lionised for his efforts to be a top-level NBA player for the past decade while being a notorious late-night party animal but his professionalism should be questioned – when you’re getting paid gargantuan eight-figure salaries, the least you should do is to be in prime physical condition, not overweight and unable to keep pace with opponents.

For all the pain of The Process a decade ago when the Sixers tanked for three straight seasons to get high draft picks, only Embiid remains in their once bulging asset bank as a certified sure thing.

Lottery picks Jahlil Okafor, Markelle Fultz, Michael Carter-Williams, Dario Saric were traded before their rookie deals expired as they were not all they were cracked up to be.

They landed what turned out to be a high-value first-rounder in Mikal Bridges at No.10 in 2018 but traded him for Zhaire Smith and a future first which was used in the deal to acquire Harris, the second-most overpaid Sixer behind Harden, earning $180 million over five years despite never sniffing an All Star team.

Bridges has developed into one of the better young two-way prospects in the NBA with the Suns. The Sixers have developed a 2020 late first-rounder in Maxey into a starter but their overall draft return for all that Process effort has been dreadful.

And, of course, Simmons, the other, other Philly No.1 pick from The Process was the centrepiece in the Harden deal although the Sixers definitely don’t regret getting rid of him after the circus of the past 12 months, more so now that the Boomers star needs back surgery which will put him out of action until pre-season starts in October.

The worry for Sixers fans is that their general manager Daryl Morey loves Harden from their days together at the Rockets despite the All-Star guard’s ongoing history of post-season flame-outs.

And he loves stashing assets so he is more likely to re-sign Harden than not in the hope of getting good production for the next few seasons and then dealing him away toward the end of his deal.

It used to be the case that no contract in the NBA is untradeable but Houston guard John Wall is proving the exception to that rule this year by getting paid $50 million to do nothing for the Rockets. He’s going to get the same next season too unless someone takes him off Houston’s hands as an expiring contract.

A Harden deal for $270 million will be even harder to shift. If he returns for one more season, that could be palatable for the Sixers but re-signing him long term could end up just as painful as those infamous days of The Process. 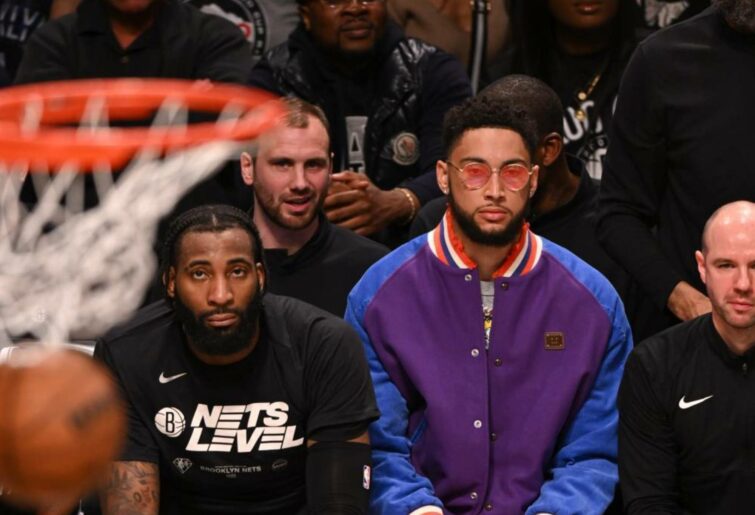 There are no games on Friday so productivity in many Australian workplaces is forecast to rise dramatically during the day.

If Joel Embiid doesn’t suit up for Philadelphia to rumble in the paint against the Heat’s physical defenders Bam Adebayo and PJ Tucker, then the Sixers could be getting swept.

Okay, campers, rise and shine, and don’t forget your booties ’cause it’s cooooold out there today. Boston head to Milwaukee with the series tied up at 1-1 after the champions thumped them in game one before they returned the favour. Defensive player of the year Marcus Smart is due back from a thigh problem but the Celtics will need their armada of elite defenders to prevent Giannis Antetekounmpo from having his way with them.