The Waratahs have been boosted by the return of Wallabies Ned Hanigan and Paddy Ryan as they try to defy the odds and secure a top four finish and home advantage for the Super Rugby Pacific quarterfinals.

Hanigan, 27, and Ryan, 33, joined the team this week after their seasons in Japan came to a conclusion and have made an instant impact, according to their new teammates.

The inclusion of the pair continues a clear strategy by Tahs coach Darren Coleman to lean into experience, something that has paid dividends in wiping the bitter memory of last season’s dire performances by a raw squad.

Prop Angus Bell hailed the impact of Jed Holloway and Michael Hooper so far this season and expected Hanigan, who still harbours Wallabies ambitions, and Ryan, who has played more than 100 times for the Tahs, to reinforce the experience levels as the team faces the prospects of a finals push.

“They have such a huge impact not only to the boys on the field but also off. They bring that calm head,” Bell told reporters on Tuesday.

“Jed and Hoops have been awesome for us this season. Jed has been killing it all year.

“It adds to the standard at training. As soon as they came in they had an immediate impact – you could just feel the competition within the squad and the intensity just lifts again.

“It’s been a positive and those two blokes [Hanigan and Ryan] are awesome. [Ryan] has helped me a lot in the scrum space and I’ve played a lot with Ned with the Wallabies and Tahs. 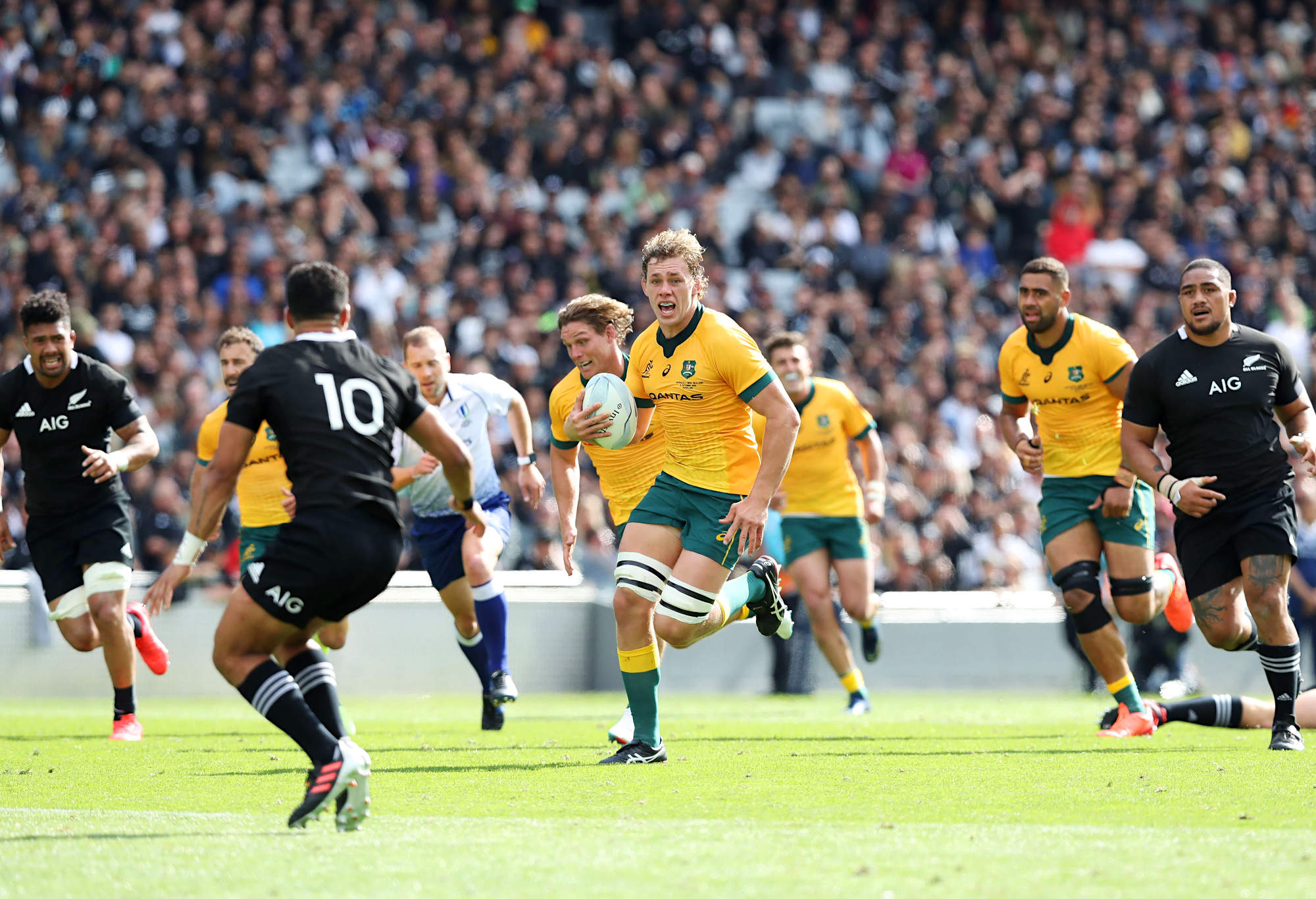 “He’s a great bloke and also a hard worker. It’s great having them both in the squad.”

Tahs centre Lalakai Foketi said Hanigan’s upbeat personality was a plus as tensions rise along with expectations.

“You can hear him before you can see him. He’s always got a smile on his face and he’s always the one trying to lift the boys up and have a laugh but also work hard,” Foketi said.

“And Paddy, he brings a wealth of experience. He’s kind of like Hoops, an older head and the boys want to perform when he’s around and show him what we can do.

“It’s great that they’re back. I was saying to the boys before that they want to come back and try slot into this team because we’re playing really well and there are so many people asking for spots. It’s great and I can’t wait to see what they can bring to the team.”

The Tahs return to Leichhardt on Saturday night two weeks after their impressive victory over the Crusaders, having kept momentum ticking over with a defeat of Moana Pasifika.

The Hurricanes were beaten by the Brumbies before thrashing Fijian Drua.

“We know they can score points from all over the field,” said Foketi.

“They’re the lowest kicking team in the competition so we know they’ll run from everywhere. We need to be alert. They’ve got a great bunch of talent. For us we just want to play down the right end of the field and limit giving the ball to their threats.

“The Brumbies nullified their opportunities and took theirs. We’re playing at home, we want to defend that and give our fans a performance.”

Wallabies scrumhalf Nic White has knocked back an offer to play in Japan, committing fully to Australia’s 2023 World Cup campaign.

White finished 2021 as Dave Rennie’s first choice No.9 and the Sydney Morning Herald, sourcing the news to unnamed sources, said the 31-year-old agreed to terms with Rugby Australia and the Brumbies on Tuesday.

A radical change to the international calendar is expected to receive widespread support when representatives from the Six Nations, SANZAAR and World Rugby meet in Dublin overnight.

A new global competition to be staged every two years – and not in years where the World Cup or Lions tours are scheduled – is set to be introduced to add a structure to overseas tours and it is being hailed as the biggest shake up to the international game since professionalism arrived in the 1990s.

The competition is a revamp of the Nations Championship which was proposed in 2019 but failed to launch, with players unions opposed on welfare grounds.

A source told the Guardian that the latest format has been “broadly agreed by all parties, including the players.”

The competition would involve the Six Nations – England, France, Ireland, Italy, Scotland and Wales – in the north while Australia, Argentina, Fiji, New Zealand and South Africa will be joined in the south by Japan.

European teams would play three matches on their summer tours against three different opponents and face the remaining three southern nations at home in November.

The top two in each pool would meet each other in a fourth week in November and the Guardian said there was support for a finals day involving all teams, rather than a ‘grand final’ style game between the top two sides.

The Times reported the international game would be split into two tiers of 12 teams each and would include promotion and relegation play-offs — one for each hemisphere.

The “Challenger” division would begin first, in 2024, and contain unions from Rugby Europe, Africa, Asia/Pacific and the Americas. Georgia, Spain, Romania, Portugal, the Netherlands, Samoa, Tonga, Namibia, the United States, Canada, Uruguay and Chile would be included, based on current rankings.

The “Elite” division is expected to start in 2026. The Six Nations and Rugby Championship would continue to be played separately.

Instead, points will be accrued across the existing July and November windows, with a final and the relegation play-offs taking place in Europe.

In essence the new calendar is being shaped to protect rugby’s traditional tournaments and rivalries but also add context and enhanced meaning to the cross-hemisphere games – hopefully increasing their commercial value at the same time.

Each Six Nations team would play three southern hemisphere opponents in July and then host the other three at home in November.

To reduce the travel burden on players, the initial plan is for the southern sides to be grouped into two time-zone-friendly pods, with the lowest-ranked team from the southern hemisphere giving up home advantage.

The Times reported that in year one, Australia, New Zealand and Japan would play host to three Six Nations teams while three others would travel to South Africa and Argentina.

Fiji, as the lowest-ranked team, would choose to host their games in either South Africa or Argentina. If promotion and relegation changes the “Elite” 12, those time-zone groupings could be reorganised.

Consideration would be built in for teams who have to play Japan and New Zealand in consecutive weeks. with more time given to them to travel between the two. Fiji would have to sacrifice home advantage in year one. That sacrifice would always fall to the lowest-ranked side – unless they had made it in the previous tournament.

The Guardian said there some stumbling blocks to be cleared this week.

For a start there are only three official Test weeks in November at present where teams need to release players for internationals.

Organisers are hopeful there is less opposition than in 2019.

Revenue sharing models and concerns over the relegation and promotion aspect are also believed to be the main areas for debate.

An update on the proposal is expected by the end of a week in which the Australian hosting of the 2027 RWC is set to be confirmed by a World Rugby vote.

Former Wallabies coach Eddie Jones has held talks with Top 14 giants Racing 92 about taking up a role after his contract with England’s Rugby Union expires.

Jones has said he intends standing down from the England role after next year’s World Cup and there has been suggestions he could be brought home to Australia in some capacity.

But French rugby outlet Midi Olympique has reported talks have been had between Jones and Racing 92 but an agreement has yet to be reached.

Racing’s head coach Laurent Travers has been linked to a director of rugby role with the club.

“I don’t necessarily think as Wallabies coach but Australian rugby and Eddie Jones have unfinished business,” Robinson said of his prospects back home.

“If the business is serious about being world class you have to bring home the best Australian coach.”

But she added: “I feel like Eddie is a head coach until he drops dead. That’s the problem. And so does Eddie. It’s tricky but I feel there’s a whole lot of IP and wisdom and fire to keep offshore.”

The Super Rugby Pacific tournament has confirmed that the postponed Round 10 match between Moana Pasifika and Western Force has been rescheduled for Tuesday 24 May.

The match, which was originally part of Super Round Melbourne, will now be played at Mt Smart Stadium, Auckland as part of the Round 15 week.

SANZAAR CEO Brendan Morris said: “Rescheduling matches due to COVID has been disruptive for several teams this season and everyone recognises the challenges that has created for players, coaches, management and fans.”

“On behalf of the Super Rugby Pacific Competitions’ Committee, I would like to acknowledge the affected teams for their understanding and in particular Moana Pasifika, who have been more affected than any other club with four rescheduled matches during their inaugural season in the competition.”