ANALYSIS: Why Lord Laurie is still king of the contact zone

Brumbies are the outsiders of Australian rugby. Like their namesakes in the wild, descended from lost horses or escapees from the earliest European settlers in the country, they are happiest when cast in the role of misfits. When Maroon red battles Sky blue for the sporting headlines in the Australian rugby media, that suits the men from Canberra just fine. They will carry on with their work and prove their worth, regardless.

That is what the Brumbies have been doing, with no great fanfare, in Super Rugby Pacific 2022. After a devastating loss to the Queensland Reds in round 8, they have bounced back to beat the Highlanders (28-17), the Hurricanes (42-25) and the Chiefs (38-28) in the last three rounds. The victory in Hamilton was a notable flag in the ground. It was the first away win by an Australian province against one of the Kiwi ‘originals’ in the latest iteration of Super Rugby.

Nobody epitomizes the spirit of the Brumby better than their contact skills coach ‘Lord’ Laurie Fisher. With his white hair flickering and flaring uncontrollably from underneath the inevitable slouch hat, ‘Lord Laurie’ looks like Rugby’s equivalent of Doctor Emmett Brown in Back to the Future.

In his own quiet way, he is just as much of an eccentric man-ahead-of-his-time as the good professor in the movie. He has done the hard yakka, coaching away from home at Munster in Ireland and at Gloucester in the English Premiership. That is the flavoursome meat in the sandwich of his stints at home with his beloved Brumbies.

As Laurie Fisher told The Roar’s esteemed Brett McKay as long ago as 2014:

“The experience of European rugby changes your mindset significantly, and while Super Rugby is often talked about as “rugby lite” sometimes – shift the ball, entertainment, etc, etc – the essence of the game is still about quality set-piece, it’s about physicality, and I’m not sure that Australian sides – although we won Super Rugby Championships – were always on that page.

It was always about being smarter than opposition sides, and we still need to retain that in terms of how we play, but I think the game demands that you match them physically, you match them technically in the tight areas and I think I’ve grown [as a coach] in that area, and brought that back [to the Brumbies, from Munster, where Fisher was forwards coach from 2009-2011].

With Lord Laurie on their coaching staff, the Brumbies’ outlook is always going to be significantly outside the Australian mainstream. There is far more of a European emphasis on set-piece, and physicality and technical excellence in the contact zone.

The Brumbies routinely present stats very different to any other Australian team in Super Rugby. They have the lowest active time-of-possession at around 15 minutes per game, they build the fewest number of rucks (62) with the lowest percentage of lightning quick ball (34%). At the same time, they have the best defence, with the fewest tries conceded in the competition, and they are equal first in the number of tries scored, especially from a lineout launch.

The Brumbies beat the Chiefs despite ‘losing’ the territory and possession stats (39% and 44% respectively), kicking more (33 kicks to the Chiefs’ 20), building less than half the number of rucks, and making 191 tackles to only 100 by their opponents.

Even his brief half-time sound-bite for Stan Sport, Laurie was singing from the typical Canberra hymn-sheet:

“Our set-piece has been good. We have defended well. We’ve played in the right areas.

“We are under pressure when the Chiefs get a lot of dominance through contact.

“So, we have got to work hard in defence, get up quickly off the ground, get players back on their feet and try to make turnover.”

So how does Laurie Fisher streamline the Brumbies efficiency? There were some clues early on in the game in Hamilton, involving number 8 Pete Samu and left wing Andy Muirhead on both sides of the ball (0:15-0:30 on the highlight reel):

When the ball is moved wide left after a Chiefs’ turnover just outside their own 22, it is the combination of Samu’s ball placement and Muirhead’s cleanout which creates the opportunity down the short-side for Nic White: 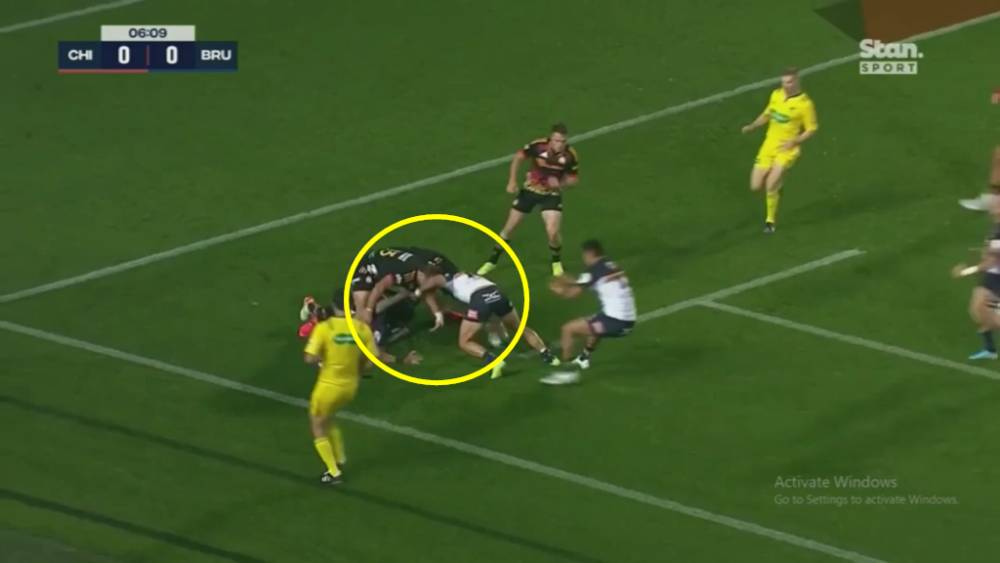 Muirhead is holding his position against two Chiefs’ counter-ruckers – number 5 Tupou Vaa’i and number 13 Alex Nankivell – to produce ruck ball with that extra short-side defender gone missing, opening just enough of a hole for White to burrow through and dot down.

At the end of the first quarter, the same two players were at it on defence, chasing a kick down the wide channel deep into the opposition 22 (1:52-2:08 on the reel):

It is the bonus you get from a typical Brumby wingman, like Muirhead and Henry Speight before him: that intensity and technical knowhow in contact situations, which made Speight probably the best jackaling and counter-rucking wing in the world only a few seasons ago.

An all-consuming kick-chase is one of the major platforms for the Brumbies success. If the turnover does not arrive on the first phase, it will come on the second or third if enough pressure is applied consistently:

Muirhead knocks down the receiver decisively after a pinpoint cross-kick by Noah Lolesio, then gets back on his feet to lead a powerful counter-ruck. Two phases later, the pressure ‘pops’ with Bobby Valetini blocking down Bryn Gatland’s relieving kick and only just failing to touch down his second kick-chase try in a fortnight!

The Brumbies build momentum off a precise, contestable kicking game and sustained pressure on chase:

The kick by Nic White is pitch-perfect and allows Muirhead and Caderyn Neville to drill the receiver (Kaleb Trask) man-and-ball, with no chance of pass or offload out of contact. Two phases later, the dividend for pressure is paid out in full, with Jahrome Brown winning turnover after the Brumbies have won the battle numbers at the previous breakdown: 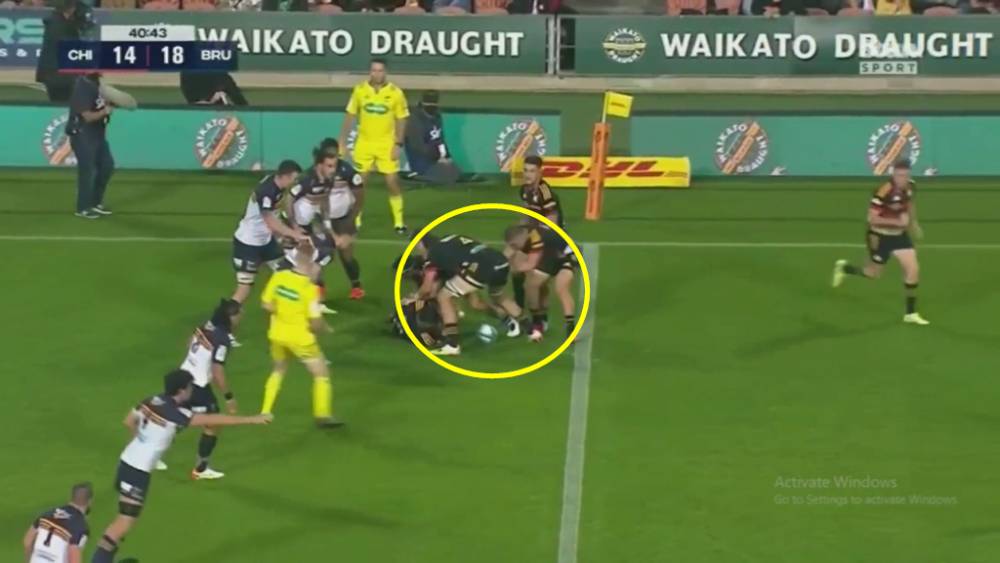 All of the Brumbies defenders are on their feet and back in the game, while five Chiefs are absorbed in the ruck and out of play for the next phase. On the very next sequence, the Brumbies scored their second close-range lineout try of the game (3:42-3:48):

Brumbies’ defenders consistently make the best decisions in and around the breakdown of any team in Australia:

Noah Lolesio understands the importance of spinning away from the cleanout at the first ruck and getting back into play for the following interception phase by Muirhead – with Pete Samu inevitably on hand to secure the ball after the change of possession. ‘On your feet – in the game’, as the saying goes.

The Brumbies effort in contact rises proportionately as play enters either red zone, with play close to the goal-line. They have rebuilt their set-piece around ex-Chiefs tight-head prop Sosefo Kautai since the scrum debacle against the Queensland Reds:

It is all about sustained technical focus and effort in contact. James Slipper changes his body-height on three separate occasions during a long 10 second scrum as Angus Ta’avao struggles to gain the upper hand, before smelling weakness and driving through his opponent to win penalty. The Brumbies first lineout try followed in short order [@1:33-1:44 on reel].

Brumbies’ defence of their own line was every bit as impressive:

Look at the work that goes in from first Valetini, then Neville at the first two rucks. Work after first contact is made in the tackle is just as important for the defence as it is for the attack. And you go on defending even after the ball has crossed your own goal-line, by preventing grounding and forcing a drop-out.

First the maul is driven back yards at the point of contact, with Darcy Swain in the van, forcing an uncontrolled delivery to the Chief’s half-back. The pay-off duly arrives on the very next phase, with Lolesio and Irae Simone winning the battle against Alex Nankivell and Kaleb Trask and giving Bobby Valetini another opportunity to indulge his favourite hobby of the moment, by kicking the ball downfield.

As the Waratahs continue to rise and the Reds go into free-fall against New Zealand opposition, the Brumbies have galloped ahead with three wins out of three versus the Kiwis. They go about their business under the radar – largely unloved and unnoticed by the rugby media, but their MO remains mighty effective.

Like their breakdown coach Laurie Fisher with his wild hair and ubiquitous slouch hat, they do not make concessions to passing fashion, or pay too much attention to whatever happens to be ‘on-trend’ in the rugby world – not if it takes them away from the core principles of set-piece, physicality and winning the contact zone.

Contact, and what happens just after it, is where the Brumbies live, and it is where they excel. It is what will take them into the knockout stages of Super Rugby Pacific, and keep the majority of their players in Dave Rennie’s Wallaby squad in 2022.

A question-mark still hovers over the degree of compatibility between the Brumbies style of play and the game-plan Rennie would like to adopt at national level. Probably, there will be less kicking and more focus on ball-in-hand attack, but the strengths of the outlier are ignored, or under-estimated at your peril.

Forget the hair and the hat – the outsider is still informing the mainstream of Australian rugby in a highly significant way. Just how much may become evident after the tumultuous Bledisloe Cup fore-runner in the very next round, when the Brumbies take on the Crusaders. That game really will give us a hard clue to the true balance of power in Antipodean rugby.