Leon Cameron will step down as GWS coach after the Giants’ clash with Carlton this weekend.

Cameron, who has been at the helm at the Giants since 2014, has officially resigned, amid much speculation over his future throughout the start of 2022.

Giants players were informed Thursday morning of the move, with assistant coach Mark McVeigh to step in as caretaker coach following the game against the Blues.

The Giants reached a semi-final in 2021, but a 2-6 start to the season led the club to put off contract talks with Cameron until the end of the season.

Giants CEO Dave Matthews had nothing but praise for Cameron’s near decade-long stint as senior coach, having replaced inaugural coach Kevin Sheedy at the start of 2014.

“Leon Cameron has an amazing legacy at this club. He’s done an outstanding job, in our view, over a long period of time,” Matthews said in a club press conference on Thursday morning.

“I think his legacy’s absolutely assured. He’s done what a lot of AFL coaches haven’t done, and that is not just coach a team, he’s helped build a club.

“He’s brought his values to this club and he’s created a culture that is very resilient and addresses the challenges that a young club, a start-up club in this fierce competition, has to confront. We’re very, very grateful for the job he’s done.”

Matthews said the decision to part ways was a mutual one, with he and Cameron coming to an agreement on Tuesday to end his time as coach, but waited until Thursday to inform players and publicly make the announcement.

“We’ve had a very pragmatic and mature approach to this year. We’ve had a lot of ongoing conversations about what the future might look like for this club, about how things were going, about where the club could find improvement about what it was that we needed to address,” he said.

“Leon and I on Tuesday had a conversation that basically got us to a decision that we’re at today.”

Rumours have been ongoing that former Essendon coach James Hird, employed by the Giants as a part-time leadership consultant, could take Cameron’s job.

However, Cameron maintained the decision to part ways was a mutual one, describing the job as ‘zapping’ and saying he needed to cut ties as much as the club. 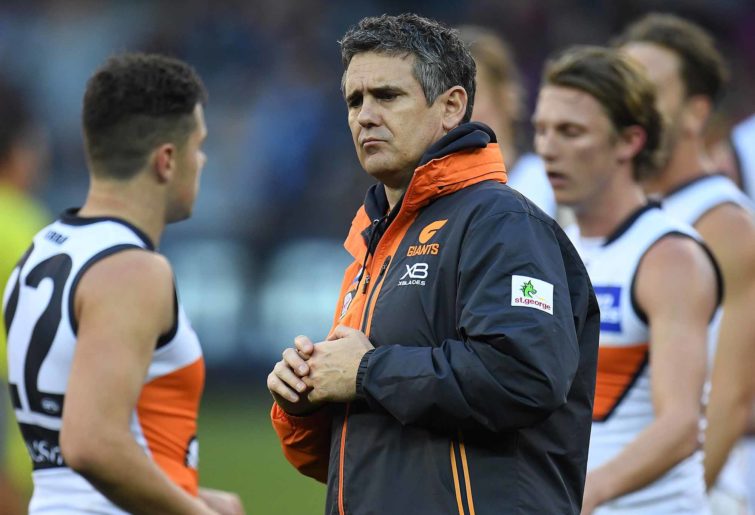 “I know I’ve still got the players, but it’s a zapping job. I’ll be totally honest, sometimes that can wear you down a little bit,” he said on Thursday.

“But in saying that, that’s not just the one reason. There’s a whole bunch of reasons… this is a good decision.

“The timing is right for our footy club to look for its next senior coach. I’m the one and Dave’s [Matthews] the one that has made that decision together.

When you’re in this environment and you are the senior coach, it’s non-stop, there’s no break.

“I admire a number of coaches in the past – Ross Lyon was one that I would sit back and admire. One thing he always said is you cannot be in 99 per cent. You’ve got to be in 100 per cent.

“As tough a day as this is, it’s the right result, it’s a good decision from both parties.”

While disappointed that the end has come, Cameron maintained his understanding of the Giants’ decision, having responded pragmatically all season long to contract discussions being placed on hold by the club; he described the call as a ‘mature’ one from club hierarchy.

“I’ve been here for just short of ten years, and you assess where you’re going. I think the club made a really mature decision,” he said.

“I understand that at the start of the year, when you park contract talks until the end of the year, it’s always going to create a bit of speculation, but for that reason, that’s the maturity that we have here. We have open and honest conversations.

“On Tuesday, when I caught up with Dave, we said, I think the time’s right to have a bit of breathing space for the club to look for its next coach.

“It’s a tough job, and it can wear you down. I know people will speculate [over] what that decision is, but I’m really proud to say it’s a joint decision between coach and the club.”

Cameron admitted the Giants’ poor start to the season, sitting 15th on the ladder with just two wins in eight rounds, also played a part in his resignation.

“Let’s be honest: we’re 2-6. I’m disappointed that we’re 2-6. I know that our players can produce some better results than that. The coach, ultimately, he’s responsible for that,” Cameron said.

“That weighs on your mind… I will reiterate, the timing is right for the club.”

Cameron took the Giants to a grand final appearance in 2019, but his failure to achieve the ultimate success with a playing group described as one of the most talented in history has left his job in jeopardy for much of the last two years.

However, Cameron said he and the club have ‘done a lot right’ during his tenure in charge, preferring to focus on that rather than a series of near-misses, including a heartbreaking preliminary final loss to the Western Bulldogs in 2016 and an embarrassing 89-point grand final loss to Richmond in 2019.

“I don’t think there’s one specific thing that’s gone wrong, I’d like to think [about] what went right,” Cameron said.

“We’ve had a pretty bad run with some injuries and things like that; probably at that specific time, trying to win that ultimate flag, we just fell short. That’s disappointing, because as a senior coach, you hold responsibility for that. That’s always going to play on your mind.

“But I’d like to think [about] what we’ve done right. We have, in a really tough market, in a start-up club… we’ve had to do a lot of things differently. We’ve got a number of young kids, we’ve got a fantastic playing group here, that have had to pick themselves up and move a lot to this footy club.

“We’ve done a lot right, the club’s in a really good position to move forward.”

Cameron’s greatest praise was reserved for his playing group, with the coach saying he was ‘indebted’ to his charges.

“Talking to the playing group this morning was really hard. These guys I’ve been with for ten years, they’ve served at our club unbelievably well,” he said.

“We’ve had some unbelievably high moments, and some tough initiation into AFL footy.

Cameron will coach his 180th and final match against the Blues this weekend, and currently boasts an impressive 94-4-81 win-loss record.

Among his achievements are seven finals victories, behind only Richmond’s Damien Hardwick (10) since he became Giants senior coach.

The Giants made finals in five of his eight seasons at the helm, including five of the last six, and won at least one final in all of those years.