Hugh_96
Roar Pro
11th May, 2022
20
Join the conversation
Advertisement
Write for The Roar

After 950-plus days of no games, a win over Fijiana and a loss to Japan may seem okay.

But in reality the loss to Japan was disappointing and a bit of a surprise, noting the last time these two teams met, in 2019, the Wallaroos won both games convincingly.

As Georgina Robinson recently implied in the Sydney Morning Herald, Rugby Australia seems to have turned a corner. The Australian teams in Super Rugby Pacific are doing okay, the men’s and women’s sevens are doing a good job and now there’s finally a light shining on the Wallaroos.

The Wallaroos really do need a light shining on them when you compare them to the football codes here and overseas. It is not just a recent issue; some stats posted by the Scrum Queens website show the Wallaroos are in 15th place with 56 Tests in terms of Tests played – below Sweden, Netherlands, Kazakhstan and Spain – while at the top of the list, as expected, England have play 296 Tests.

The non-rugby aspects of the Japan game are worth mentioning. Rugby Australia is often criticised, but you have to say that when it comes to the First Nations jersey initiative, rugby leads Australian sport on the international stage.

From the women’s perspective, rugby sevens were the first national women’s team to wear a unique First Nations jersey, and now the 15s have debuted their own unique strip. Along with this, the Wallaroos sang the Australian national anthem in the local Yugambeh language.

Back to the rugby side of things, the Japanese do everything at speed and intensity throughout the whole game. They swarm in all efforts in defence, they are on the ball during the tackle and over the ball after the tackle, and they attack in numbers.

Like Fijiana, they are more than happy to tap and go. Even though Japan was creased in the scrums and were unable to compete with the Wallaroos’ bigger size, they continued to front up. The Japanese are a very well coached team. 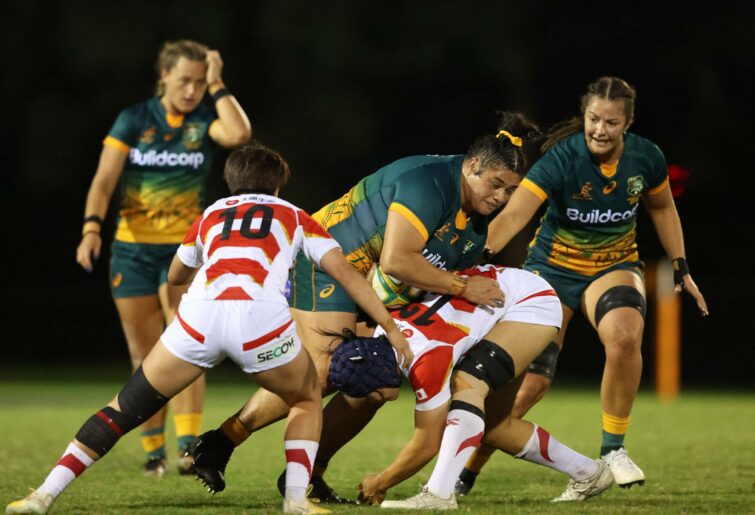 The Wallaroos are back to the drawing board. They had the possession and opportunities to win the game. It is no doubt reflective of the lack of international games over the last couple of years. Japan have progressed, having headed up to the UK at the end of last year to gain some important international game time.

The Wallaroos have a solid pack that appears to have a good set piece, except for a couple of lineout throws. They have a very experienced back row of Grace Hamilton, Emily Chancellor and Shannon Parry and with a young gun, Piper Duck, on the bench. It is a bit of a Michael Hooper-David Pocock ‘Pooper’ set-up with two openside flankers.

So far the front row looks like it can hold its own with the experience of Liz Patu and size of Eva Karpani. Both locks, Michaela Leonard and Kaitlan Leaney, are real workhorses who do a good job in the lineouts and around the field. These locks are backed up from the bench by Sera Naiqama. The only comment you could make is they are not that dynamic line-bending locks we would probably like. A name to keep a lookout for is 20-year-old Brumbies lock Grace Kemp, who is in the squad.

The main issue to come out of the game seems to be the backs. They were not able to cope with the pressure that came from the Japanese rush defence, and as a consequence the passing was not great.

While the experienced Iliseva Batibasaga is a good half and has great defence, she lacks the sniping and a bit of creativity. As an alternative, the reserve half, Layne Morgan, is also the reserve half at the Waratahs and so really has not had an enormous amount of game time. Arabella McKenzie is a quality five-eighth and is the best in the Super W.

Centres Pauline Piliae and Georgie Friedrichs are very good, although neither has that huge blockbusting running, which would have been handy. In saying that, Friedrichs is a compulsory selection and provides a lot in both attack and defence. Her defensive reads and tackle technique are probably the best in the team.

On the wings Mahalia Murphy and Ivania Wong can be dynamic – as can fullback Lori Cramer – but were not given the opportunity to show their skills.

But as captain Shannon Parry said, as a team they had been together for only ten days, so there is a lot of improvement to come.

The next stop is in June for the Pacific Four Series in New Zealand against Canada, USA and New Zealand.