Whenever a young halfback prodigy enters the NRL, they are often unfairly compared to Knights Immortal Andrew Johns.

Especially if they’re from NSW, their potential is rated against “Joey”, who has been the benchmark for anyone wearing No.7 on their back since he led Newcastle to grand final wins in 1999 and 2001.

From the moment he was fast-tracked into the NRL at the age of 18, Nathan Cleary has been viewed as a potential superstar.

He’s lived up to that promise and at 24 and re-signed with Penrith until the end of 2027, the daunting prospect for opposition teams is that he is probably only now entering the prime years of his career.

Johns himself penned a column last August for the Sydney Morning Herald in which he said Cleary could possibly relegate himself and Johnathan Thurston down the pecking order of all-time great halfbacks to become the best in rugby league history. 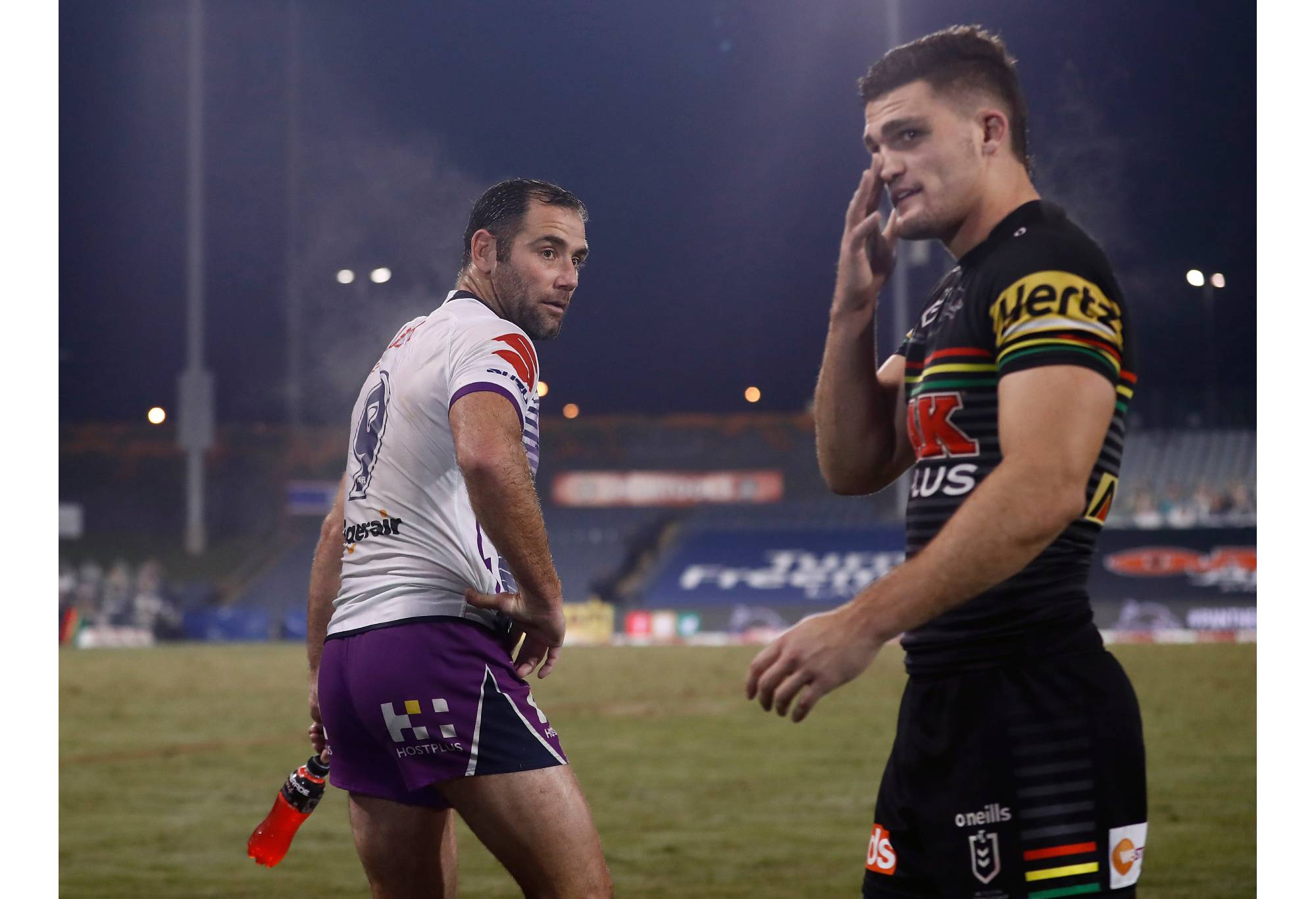 “If Penrith halfback Nathan Cleary continues on his current trajectory, JT and I are fighting it out for silver and bronze,” he wrote.

For a sport whose awards are dominated by halfbacks, curiously Johns is the only halfback among the 13 Immortals although Thurston is likely to join him in that pantheon of greats down the track.

Cleary’s career still has likely another decade to go before he enters that discussion and while his on-field play is the epitome of a halfback, his control of the game is similar to Melbourne legend Cameron Smith, who exerted similar influence as a hooker. 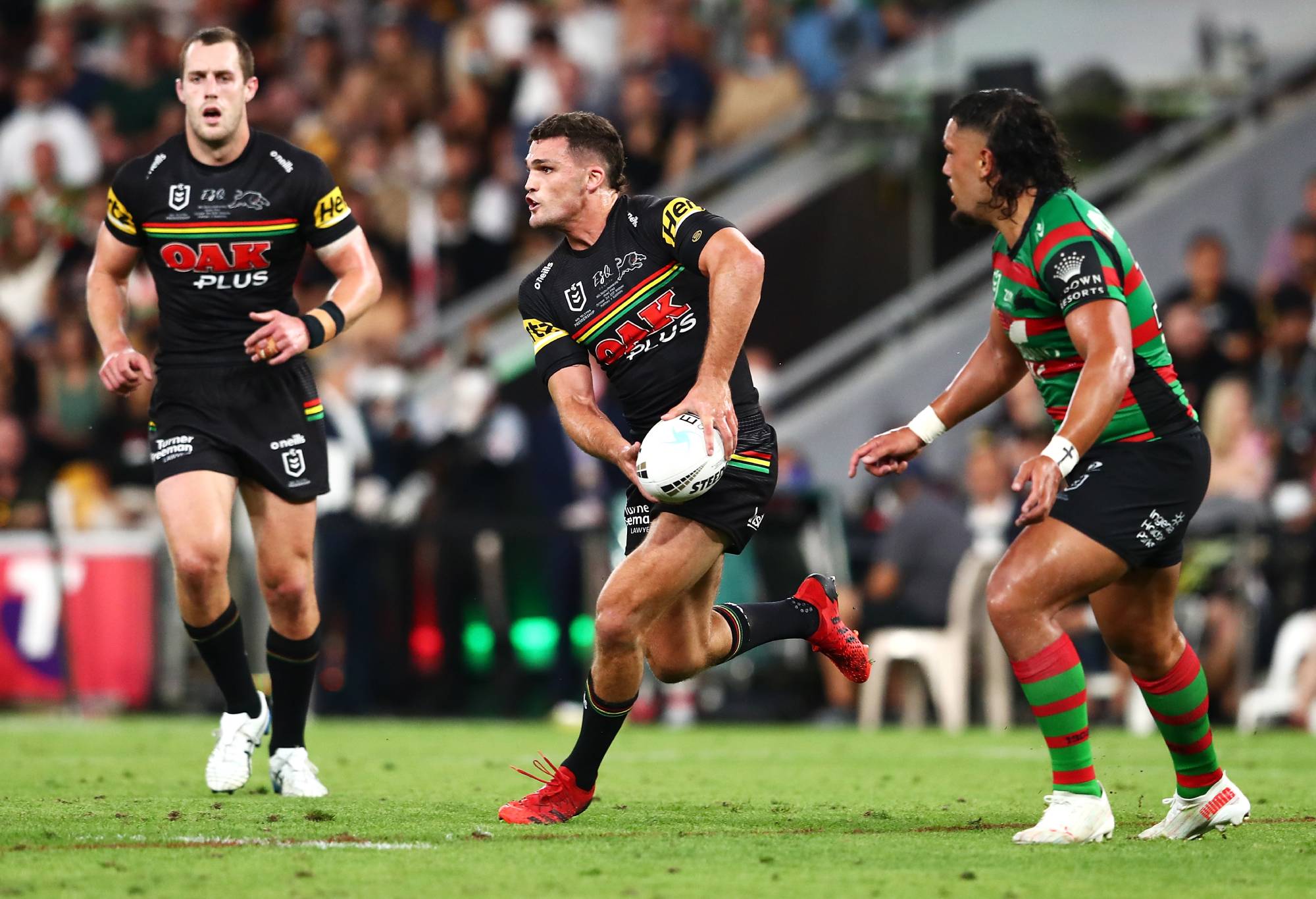 When it comes to controlling the tempo of a game, Cleary has become the modern-day master since Smith finally hung up his boots a little more than 18 months ago. That awareness of knowing when to apply the pressure, when to keep things on an even keel and when to boot the ball into touch to give the team a breather is a hallmark of all the great halves, and Smith, who especially in his later years would switch out into first receiver to further orchestrate proceedings for the Storm like a pseudo No.7.

Cleary is developing his leadership skills since taking over as co-captain Isaah Yeo at the start of last season and although he’s not on the level Smith reached as far as an ability to influence referees, he’s got a similar demeanour with the whistleblowers.

The subtle art of persuasion is not easily learned and referees are trained to know it’s coming. Some captains try to intimidate refs with wild gestures and raised voices, but Cleary is cut from the Smith cloth of reasoning with the refs on a regular basis throughout a game to ensure Penrith are not disadvantaged, and are often advantaged by decisions. 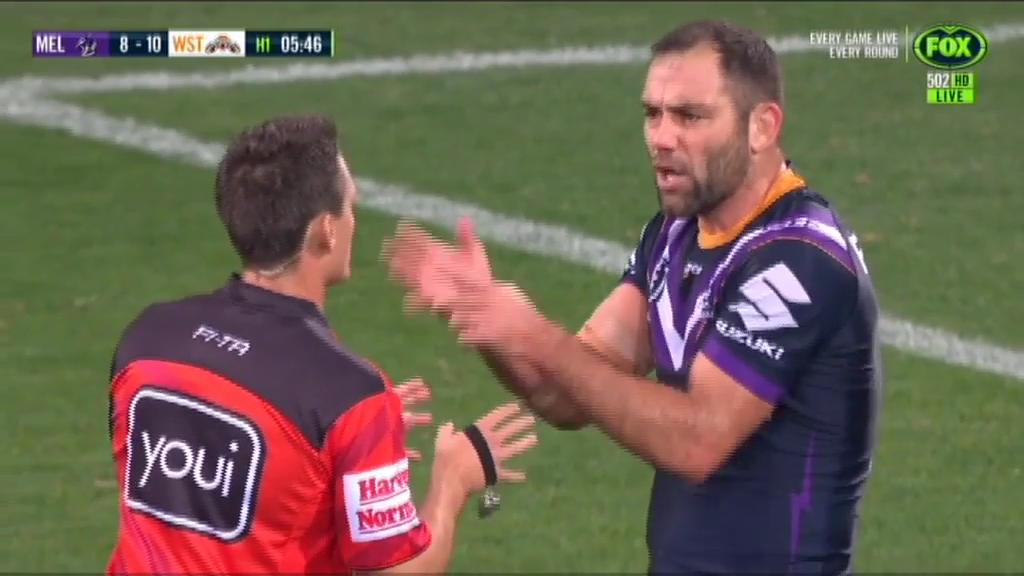 Smith is as close as there can be to a guaranteed future Immortal after finishing his unprecedented career with three premierships, a record-breaking 430 NRL appearances and more points than anyone else in history with 2786.

Cleary has the potential to top Smith in all three of those categories.

He already has one premiership ring after the Panthers edged out South Sydney in last year’s grand final and based on Penrith’s young roster, financial stability and production line of home-grown talent, it’s not inconceivable that they could win another three titles during Cleary’s tenure.

When Smith retired after the 2020 grand final win over Cleary’s Panthers, he was 37. With the continued advancements in sports medicine, Cleary at 24 could play into his mid 30s. Fellow halfback Daly Cherry-Evans is 33 and recently re-signed with Manly to keep him at the club until the end of 2025 when he will be 36.

Cleary now has 126 NRL appearances under his belt – Smith was also 24 when he had played the same number of matches. 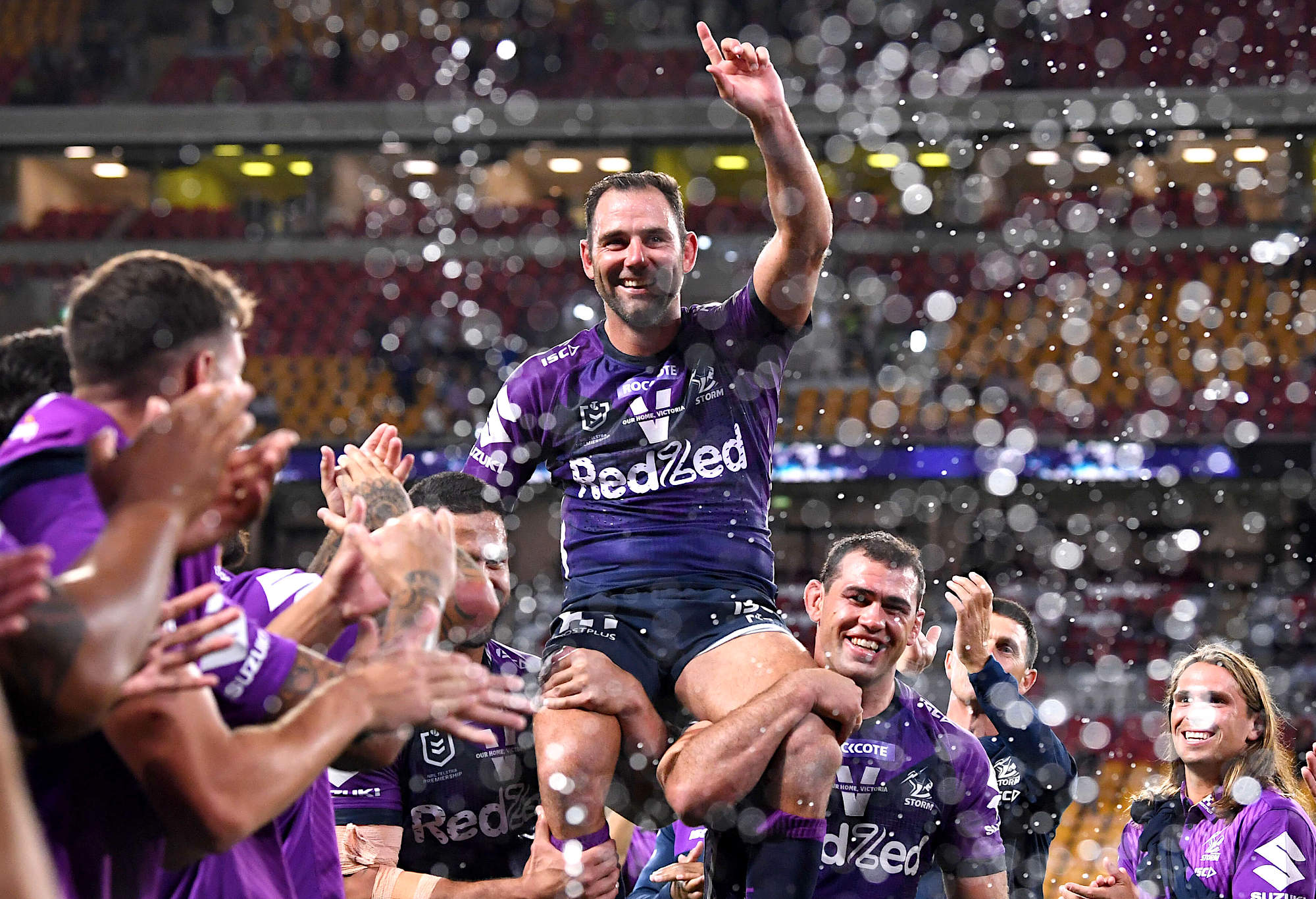 Smith played 20 or more games every season apart from his rookie year when he was used just twice as a halfback when Matt Orford was unavailable and when he played 19 in his final year but that was a shortened competition due to the COVID-19 pandemic.

He averaged 24.06 per year in between those two seasons

Cleary, taking out his rookie year when he played 15 games after getting a mid-season debut and this year’s not even half-completed campaign, has averaged 21 matches per season, including the shortened 2020 premiership.

If he can average Smith’s 24 games per year, Cleary could overtake him if he also plays until he’s 37.

By no means a given but if he stays injury free and maintains the competitive fire that he’s shown in his first six years in the NRL it’s a possibility.

Cherry-Evans was 22 when he made his debut and has worn Sea Eagles colours 270 times so he will likely be in the 350-game ballpark when his latest contract is up. 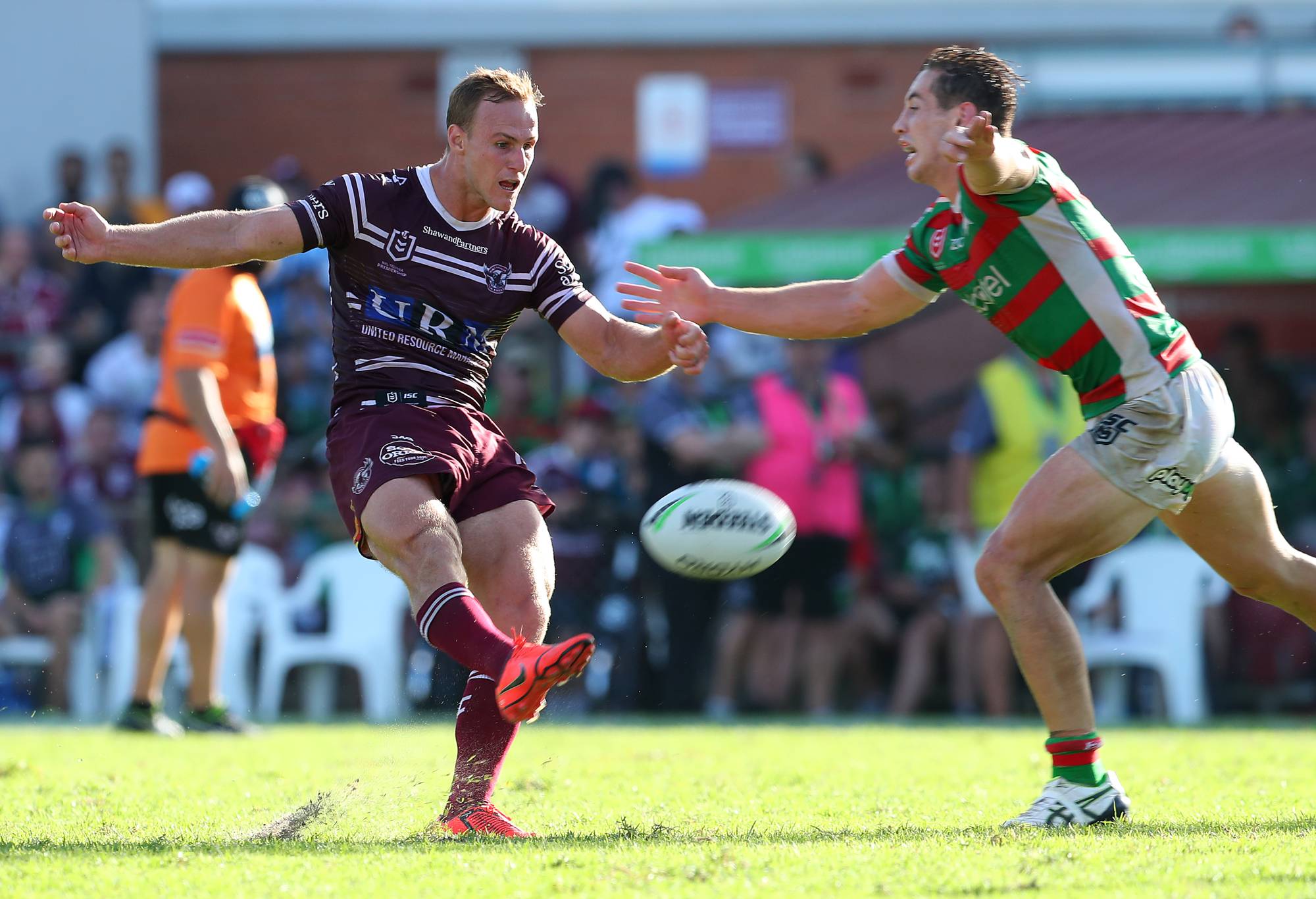 Sharks veteran Aiden Tolman is the only active member of the NRL’s 300 Club after reaching the milestone last month.

Mitchell Pearce, who was 17 when he made his debut at the Roosters in 2007, was the fastest in premiership history to 200 matches at 26 – beating Craig Wing’s record – but abandoned any remote hopes of reeling in Smith when the 33-year-old left Newcastle in the off-season on 309 NRL matches to play with Catalans in the Super League.

Raiders star Jack Wighton, who is 29 and has amassed 207 games since his debut at 19 in 2012, Cameron Murray (112 by age 24 after debuting at 19) and Rabbitohs teammate Campbell Graham, who will bring up his century at Magic Round as a 22-year-old after breaking into first grade at 18, are theoretically also a chance of eventually reaching Smith’s rarefied atmosphere.

But they are only at base camp in the journey to Smith standing on Mt Everest. 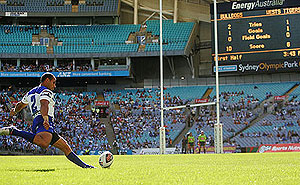 When it comes to scoring points, Cleary appears a more realistic chance of toppling Smith as the greatest in premiership history.

Smith’s tally of 2786 is 368 clear of Bulldogs legend Hazem El Masri with Canberra co-captain Jarrod Croker third all-time with 2244. The veteran centre has two more years on his deal at the Raiders but with injuries starting to limit his effectiveness and availability over the past 12 months, he seems unlikely to surpass Smith.

Broncos halfback Adam Reynolds is the only other current player anywhere near Smith. He has racked up 1950 points and at 31, with two more years left on his deal at Brisbane, he would have to play on beyond that contract to give the record a nudge.

Cleary last year became the 54th player in premiership history to reach four figures and has 1096 from his 126 Panthers appearances. Warriors veteran Shaun Johnson (1186) is the only other current player who’s reached the 1000-point milestone and he’s not even their goal-kicker anymore.

Among the players ahead of Cleary on the list is his old man Ivan, who racked up 1363 points during his stints with Manly, Norths, the Roosters and Warriors. Next year he will likely be overtaken by the fruit of his goal-kicking loins.

Nathan is averaging 8.7 points per game so if he maintains that rate, it would mean he would have to play 320 career matches to knock Smith off the top pointscoring perch.

Again, not a guarantee but when you’re playing in a dominant Panthers side that scores a lot of points and your career goal-kicking accuracy is north of 83%, it seems a safe bet that Cleary will eventually be the top scorer in premiership history. 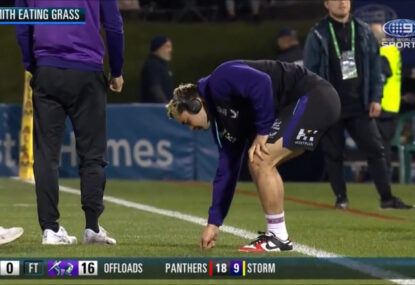 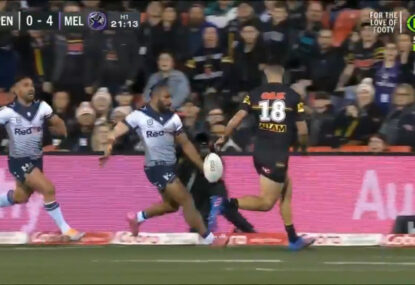