Craig Bellamy could do nothing afterwards but admit his team was asphyxiated by the Panthers, who slowly took the life out of the Storm with a methodical second-half performance played almost entirely at one end of Suncorp Stadium.

“The second half, we were under pressure the entire time, they just strangled us,” said Bellamy.

“If there was a positive for us, it was our second half. With the amount of field position and ball they had within our 20m zone, the score was just 12-0. We’ve got to take a positive and that was it.”

In truth, the chances of a contest worthy of the billing might have disappeared into the ether once Jahrome Hughes was scratched with a calf injury at lunchtime, and then confirmed by a near-constant drizzle that flowed throughout the day in Brisbane.

Bellamy refused to use his missing superstars as an excuse.

“I expected better,” he said.

“We had a couple of guys out, but at the end of the day, other teams have that and it’s going to happen to us again this year as well.

“The guys that come in we expect to do a job and play to their strengths.

“It’s probably a game we needed after three or four weeks where we’ve won well.

“With all due respect, that was a good comedown for us tonight. We got what we deserved and perhaps we haven’t been going as well as other people thought.

“We’ll learn from that and be a bit of a better team.” 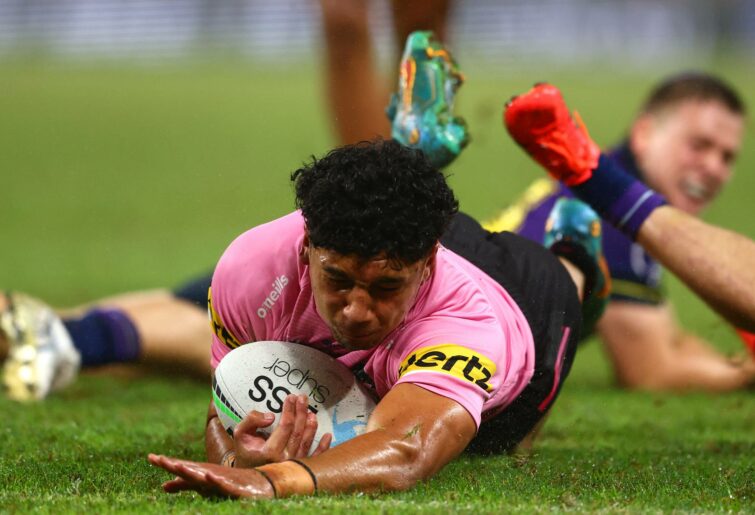 BRISBANE, AUSTRALIA – MAY 14: Izack Tago of the Panthers scores a try during the round 10 NRL match between the Melbourne Storm and the Penrith Panthers at Suncorp Stadium, on May 14, 2022, in Brisbane, Australia. (Photo by Chris Hyde/Getty Images)

Penrith were not without their outs, too. Ivan Cleary remained at home after a second knee surgery in as many weeks with Cameron Ciraldo, who missed last week’s loss to Parramatta in Covid isolation, pushed into the top gig.

“It wasn’t a normal week with Ivan missing,” said Ciraldo.

“He really wanted to come up this morning but made a decision not to come.

“There could easily have been plenty of distractions there but our guys handled it really well.

“Even the game before us went to golden point and we had to stop our warm-up, send them away and come back.

“They just handled everything we threw at them in the last couple of days.”

With Nathan Cleary, Isaah Yeo and Jarome Luai in this form, however, the coach doesn’t really matter on gameday. The machine keeps running and running.

“Nathan controlled the game well throughout but especially in the second half,” added Ciraldo.

“We know both teams will be better the next time we play each other, but we could only control what we can control. Nathan did a great job of that in the second half.”

The Panthers were occasionally able to show flashes of their attacking brilliance, but Melbourne simply never got going to challenge them.

They were always likely to miss Ryan Papenhuyzen – his replacement, Tyran Wishart, has played as a bench utility and hooker in previous NRL appearances – but losing Hughes on gameday was insurmountable.

That said, no Craig Bellamy team will be happy with a sub-70 per cent completion rate, even taking into account the horrendous rain. The Storm managed no tackles inside the Penrith red zone in the second half, and only 11 within the opposing half at all.

Perhaps the flow of the game could have been predicted from the absentee list and the conditions, both of which negatively affected the main event of Magic Round.

The first half featured thirteen errors and nine penalties – partly a reflection of the willingness of both sides to promote the ball despite the rain – and often failed to find a rhythm or grind.

It’s hard to remember a time when Melbourne completed at 65 per cent, as they did in the first half, or when they failed to make a single line break.

The Panthers’ significant advantage of fielding their first choice backline was clear: their first try was as perfect an execution of what the Penrith club is about in 2022 as possible.

Isaah Yeo was there, digging deep into the line, while Jarome Luai performed his regular bolero to induce contact and drop Izack Tago on a crash line for the opening score. It had men in motion, deception and a deadly finish.

The second followed soon after in more prosaic fashion: a Nathan Cleary kick to Viliame Kikau, with the Fijian flying highest to claim and score.

Melbourne were shorn of two of their superstar spine, but Cameron Munster was still on hand to produce his own magic. The five-eighth found Nick Meaney with a dinked Crossfield kick to get the Storm on the board.

The fightback was short-lived. Stephen Crichton thought he had got over, but failed to ground. Ashley Klein pulled the play back for a high shot and Cleary took the two.

He needn’t have worried. With the bell imminent, Tyran Wishart, foisted in at fullback, dropped a kick under little pressure and presented Tago with his second.

It took a while in the second half for the Panthers machine to kick back into action. When it did, it did so in style: Cleary isolated Kikau against Cooper Johns in the defensive line, and while he didn’t score himself, it was an easy offload for Jarome Luai to cross.

Penrith hit right next. Again, it was Yeo and Cleary in the heart of it, with Dylan Edwards appearing on the sweep to deliver Stephen Crichton to the line.

Melbourne had no answers. They had none all night.