REACTION: 'We just haven't fronted' - The four minutes that exposed massive gulf between Reds and Blues

The Blues won’t be ecstatic with their defensive performance but the attack of internationals stars including Beauden Barrett, Finlay Christie, Akira Ioane and Caleb Clarke claimed a bonus point and was too hot for the Reds to handle, especially in a second half where the visitors were penalised 9-0.

The return of James O’Connor at No.10 did help the Reds going forward, but they fell short of the standard defensively against a team that thumped the Rebels 71-28 a week earlier and moved to a 11-1 record for the season. The Blues scored eight tries on the night – and 19 in the past two games.

The Reds were in touch at halftime down 22-14 but the Kiwis hit them with a stunning two-try blast in four minutes at the start of the half – and they missed 28 tackles to give themselves no chance against a tough foe.

“Those five – 10 minutes after half time we just haven’t fronted,” said Reds skipper Tate McDermott. “I don’t think the scoreboard is reflective of how hard we tried out there but the Blues were all class. 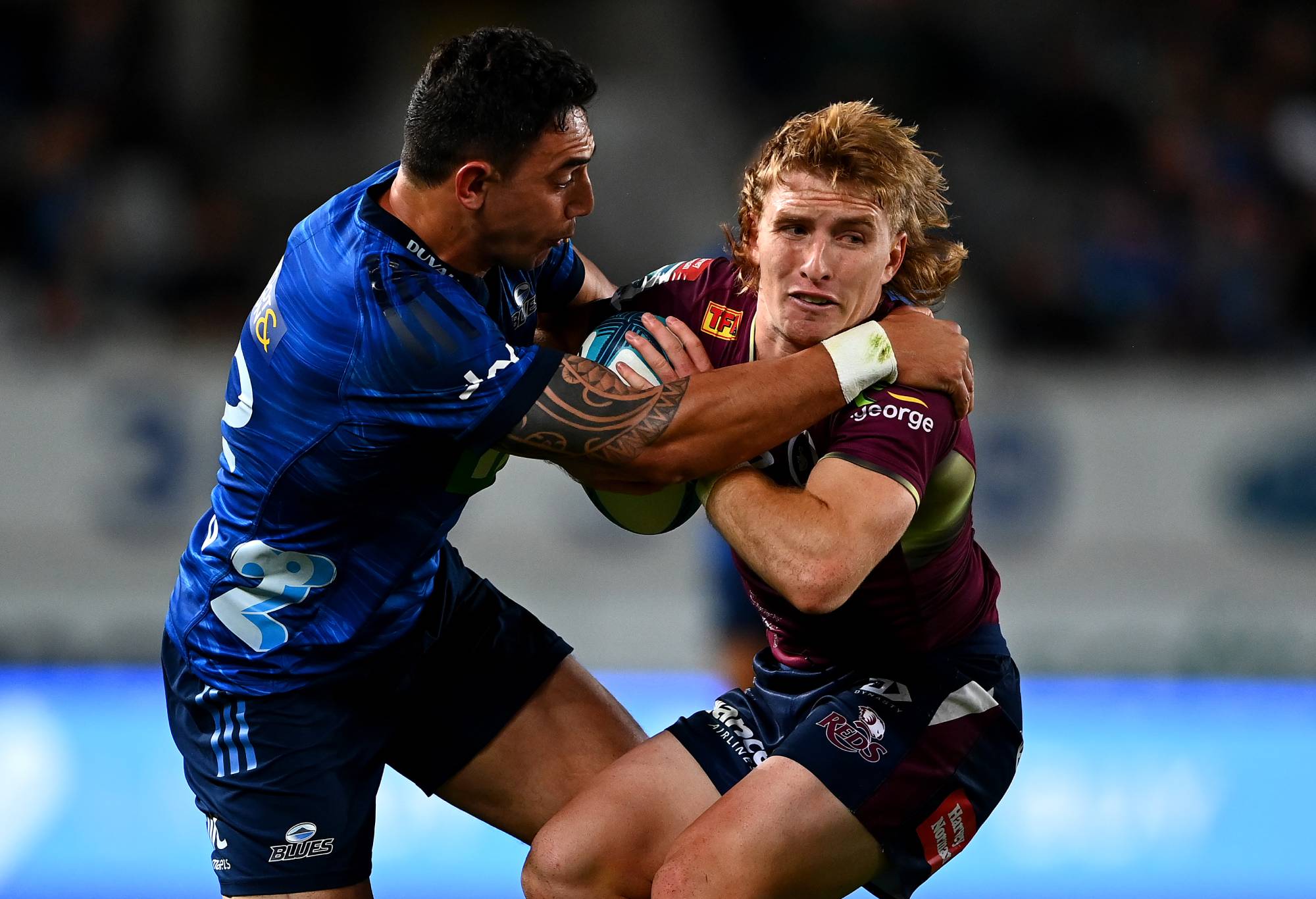 Tate McDermott of the Reds is tackled by Bryce Heem of the Blues. (Photo by Hannah Peters/Getty Images)

“We were just slipping off tackles. I’ll never fault this side for effort – we’ve just got to make sure in those key moments we’re executing which we’re not doing at the moment.”

“Good sides like the Blues, it’s fast, it happens, bang, two tries. It sits you on your back side and you have to work back into the game and try get some possession.”

It didn’t take long for the errors to begin for the Reds. Within two minutes of the start O’Connor, restored after three weeks sidelined by injury, drove a kick from a penalty into the Blues’ 22 but Albert Anae’s throw was poor from the lineout and the Blues were off the hook.

Anae struggled to settle and had to go off injured in the first half. Wallabies centre Hunter Paisami also lasted just under half an hour before he was replaced injured. The Blues had already lost All Blacks centre Rieko Ioane on 11 minutes but his replacement Bryce Heem made an instant impact, charging through for the hosts’ opening try with his first touch.

Soon after the Blues were in again with Seru Uru making the first of two critical errors that led to tries in the opening half.

While the Blues committed nine penalties to two in the first 40 minutes, it was the Reds’ continuing ill-discipline that allowed the hosts to take a stranglehold and Uru was exposed badly on both occasions.

The first, he lost the ball while the Reds were on attack in the Blues’ 22 and the hosts brutally exposed the Queenslanders.

Code hopper Roger Tuisava-Sheck made a phenomenal line break and although stopped, the Blues rolled on relentlessly. Lock James Tucker refused to yield to several cover tackles and by the time the tall timber fell it was too late, All Blacks winger Caleb Clarke diving over to complete a magical 82 metre move.

At 17-0 after 18 minutes the rout looked inevitable, but the Reds did find a reaction.

Suli Vunivalu had some moments when he chose to get involved and he arrived on the end of a neat pass from Tate McDermott to score near the posts.

But just as the Reds looked like they had gotten back into the contest, Uru made his second blunder.

This time he lost it in his own half and Heem stormed across for his second.

Again the Reds found a life line, with lock Ryan Smith emerging with a try after a rolling maul to make it an eight point game at the break.

A tricky second half kick off worked between Stephen Perofeta and Barrett confused the match commentators and perhaps the Reds were still in a state of discombobulation as the Blues ran in two tries in the next four minutes.

Clarke with a second was followed by Barrett’s first and then on 56 minutes Perofeta put the score out to 39-14 when he converted his own try.

The Reds were being cut apart by relentless Blues running and their defence was never comfortable. There were signs of hope at the other end – Jock Campbell well set up by James O’Connor for a third try, but it simply just provoked the Blues to fire up once again.

“For us winning is contagious,” said Blues star Dalton Papalii. “It comes down to the basics done well and you can’t get tired of that. hat’s what makes a championship team.”

McDermott was buoyed by the attacking precision of his side.

“That’s always been something we’ve been pretty proud of, our attack, we’ve just got to get the ball, that’s oour main issue,” he said.

“James O’Connor steered the ship really well tonight – he’s been missed and did an awesome job.”

Thorn, who will need to lift his side for a must win game against Moana Pasifika next week, was said it was a “tough one, all day.

“They’re a very good side, the Blues – good all over the park,” said Thorn. “It was just pressure – defensively we let ourselves down, and they had an allround game there.

“Halftime we we in a game of footy – two quick tries after half time and they get momentum – disappointing for us.”