News
14th May, 2022
1
Join the conversation
Advertisement
Write for The Roar

Jurgen Klopp has paid tribute to neuroscientists after his Liverpool’s triumphed in another penalty shoot-out to lift the FA Cup.

Liverpool beat Chelsea 6-5 on penalties at Wembley on Saturday, defeating the Blues for the second time this season in a cup final shoot-out.

Kostas Tsimikas slotted the sudden-death winner this time around as Liverpool completed the set of top titles under Klopp.

And the Reds’ German manager paid tribute to footballing neuroscientists Neuro11 as the secret weapon behind his side’s penalty acumen.

“In the end we all know penalty shoot-out is a lottery, that’s how it is; but we did it again,” said Klopp.

“We work together with the company Neuro11, four guys from Germany.

“They got in contact with us a few years ago. They are neuroscientists and they said ‘we can train penalty shooting’.

“We said ‘really? That sounds interesting, come over’. And so this trophy is for them, just like the Carabao Cup was.” 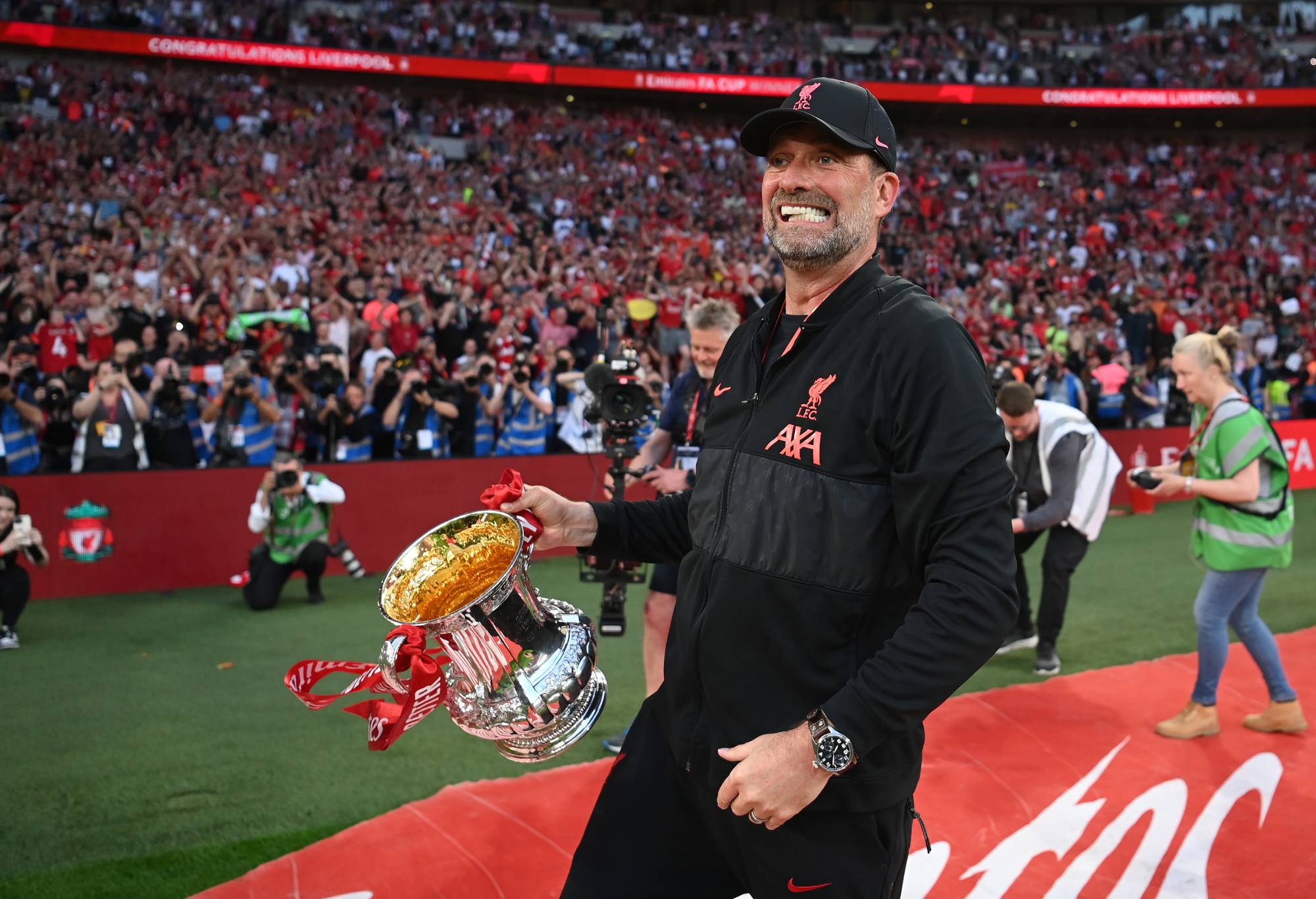 Jurgen Klopp of Liverpool celebrates with the FA Cup during The FA Cup Final match between Chelsea and Liverpool at Wembley Stadium on May 14, 2022 in London, England. (Photo by Michael Regan – The FA/The FA via Getty Images)

A 6-5 victory over Chelsea on penalties in Saturday’s final produced Liverpool’s first FA Cup triumph since 2006 and kept them in contention for – potentially rather than likely – a quadruple of trophies.

Just like in the League Cup final in February, the FA Cup showpiece ended 0-0 through 120 minutes before Liverpool prevailed again, 6-5 in the penalty shootout.

This time, the Reds were helped by Chelsea midfielder Mason Mount’s penalty being saved before Kostas Tsimikas clinched the shootout win with his first-ever goal for the club.

“The small margins are again the difference and I cannot be more proud of my boys,” said Klopp, who has emulated Manchester United’s Alex Ferguson as only the second manager to win the European Cup, Premier League, League Cup and FA Cup with the same English club.

In two weeks, Liverpool will be hoping to win the Champions League final again against Real Madrid.

Before then, Klopp has to hope Manchester City slip up in the final two rounds of the Premier League and Liverpool can take advantage to regain that trophy.

“That is part of the ‘mentality monsters’ as well, going to extra time and keeping the high level, performing well,” Liverpool’s goalkeeping hero Alisson Becker said.

“It gives us even more confidence to keep on going for the Premier League and also the Champions League final.”

There was only more Wembley pain for Chelsea. Weeks of ownership turmoil for the club are ending with them becoming the first team to lose three consecutive FA Cup finals.

The final of world football’s oldest competition had never gone to penalties before at Wembley. There hadn’t even been a goalless final after extra time since it started being played at the national stadium in 1923.

But Liverpool’s last FA Cup success in 2006 was in one of the two previous shootouts that settled the Cup final that both happened in Cardiff while Wembley was being rebuilt.

Saturday’s final ended with one half of the stadium shrouded in a red haze of smoke after beginning under a cloud when Liverpool fans jeered the national anthem and the introduction of Prince William.

After the ceremony to mark 150 years of the FA Cup, the 141st final was more tense than turgid, just like in the League Cup final.

There were 58 shots produced by the teams without finding the net over their two games at Wembley in 2022.

It didn’t help that Liverpool’s star striker Mohamed Salah had to come off after 33 minutes with a sore groin to be replaced by Diogo Jota.

A blistering start to the second half by Chelsea saw Marcos Alonso shoot wide and send a free kick onto the crossbar.

But a late flurry of Liverpool attempts couldn’t prevent the game going into extra time, with the post hit by Díaz from a tight angle and Andy Robertson from close range.

And for only the second time – after Arsenal’s 2005 meeting with Manchester United in Cardiff – an FA Cup final ended 0-0 after extra time.

The shootout was going Liverpool’s way after captain Cesar Azpilicueta missed Chelsea’s second penalty until Sadio Mane missed a chance to win it when Senegal teammate Mendy saved his kick.

Mount was thwarted and Tsimikas produced his biggest moment since joining Liverpool in 2020 as Liverpool claimed their eighth FA Cup.