News
14th May, 2022
9
Join the conversation
Advertisement
Write for The Roar

John Aloisi has hailed Jamie Young’s goalkeeping masterclass, comparing one save to Gordon Banks’ greatest ever, after Western United beat Wellington Phoenix 1-0 in their elimination final to seal a blockbuster A-League Men semi-final against Melbourne Victory.

Aleksandar Prijovic’s tenth-minute thunderbolt and a series of sublime Young saves at AAMI Park on Saturday proved enough for United to reach the final four and ensure Melbourne will host this season’s grand final.

Young’s finest moment, in the 71st minute, prompted coach Aloisi to compare it to the most celebrated save of all-time – England goalkeeper Banks’ amazing stop from Brazilian Pele’s header in a 1970 World Cup group match in Mexico.

When James McGarry’s header looked certain to level the scores, the veteran goalkeeper flung himself sideways then clawed the ball almost out of the net with one hand.

“It was like a Gordon Banks save, wasn’t it?” Aloisi said.

“It did remind me of that. I wasn’t alive, obviously, at the time but I’ve seen that save a lot of times, when Pele had that header and Banks saved it.

“It was an incredible save. He obviously has the reflexes there and to have that strong hand to put it around the post was impressive.”

A humble Young played down the moment.

“The best thing about being an athlete is, ‘can you execute big plays and big moments?’

“For me, that’s the most satisfying thing but if people want to compare it to goalkeeping royalty, then that’s okay for me too.”

Young also made a sensational diving save to paw away Reno Piscopo’s fierce strike with one hand in the sixth minute and also denied him from a free kick in the 77th.

“The two best players on the park were probably Jamie Young and Oli Sail, they were outstanding, both goalkeepers,” Aloisi said.

“I expect that from Jamie. I’ve known Jamie for a long time, coached him in Brisbane so I knew that Jamie will and can pull off important saves.”

Aloisi’s United face Victory at AAMI Park on Tuesday night and Saturday evening but could be without Rene Khrin, who was helped off with a suspected hamstring injury in the 74th minute.

United had lost all three of their clashes with Wellington this season and hadn’t beaten them since their first ever game, back in October 2019.

They scored when Ben Garuccio’s cross dropped to Prijovic and the Serbian striker took a touch, propped then struck a scintillating strike into the top corner at the near post for his tenth goal of the season.

It brings to an end Wellington’s second season spent predominantly away from New Zealand.

“Jamie Young was probably the best player on the park. That tells you a bit of a tale about the game,” coach Ufuk Talay said

“We created enough chances to get ourselves back in the game but disappointed at the end, we don’t continue.”

Melbourne City will play the winner of Sunday’s match between Adelaide United and Central Coast in the other semi-final. 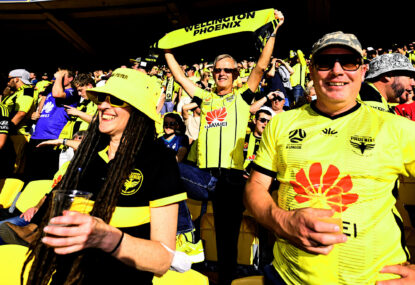 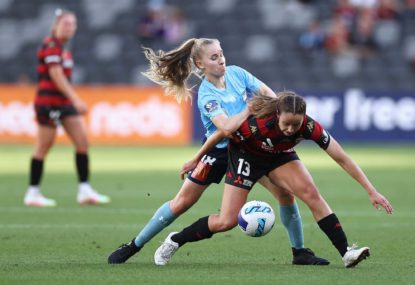