News
15th May, 2022
9
Join the conversation
Advertisement
Write for The Roar

West Coast coach Adam Simpson has implored fans to stick by the club during its year of pain.

The Eagles slumped to their fifth straight loss on Sunday when they suffered a 74-point loss to Melbourne at Optus Stadium.

West Coast’s average losing margin across that stretch is 81 points, with Simpson struggling to field a side each week due to injuries and COVID-19.

A crowd of just 27,488 fans turned up for Sunday’s defeat to Melbourne.

The Eagles consistently attracted crowds of more than 50,000 when they moved into Optus Stadium in 2018.

A combination of WA’s COVID-19 outbreak and train problems meant Sunday’s crowd was even lower than expected.

But the team’s horror poor form has played the biggest part in the huge drop in crowds.

“One thing I do know is we’ve had some really good periods as a footy club and we’re coming out of a really good era,” Simpson said.

The Eagles are set to be boosted by the return of captain Luke Shuey for Sunday’s clash with GWS.

Shannon Hurn, Josh Kennedy, and Andrew Gaff could also return, but Elliot Yeo (concussion/protocols) is set to be given a stint in the WAFL to build up fitness and form.

The Eagles were missing 11 of their best 22 players against Melbourne, and Simpson saw some positives in the defeat.

“We’re obviously looking to play some youth, get to the draft, and looking for a new identity as a club in terms of the way we want to play,” Simpson said.

“All those things make it challenging when you don’t have your best team on the track.

“We want to be better, we want to score more, we want supply and we want a style of play that stands up.

“But it is a challenge to try and give you that with what we’ve got in front of us.

“We’re trying to be as positive as we can and pragmatic.” 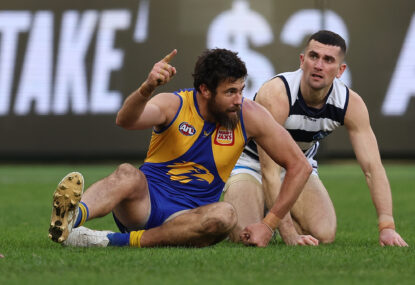