Geez, umpire dissent is just about the stupidest penalty that the AFL has ever brought in.

There have been so many kneejerk reactions to problems of aesthetics rather than problems of substance that it’s hard to separate them. About all they show is if there’s one thing the AFL’s great at, it’s overreacting.

So now apparently it’s an issue for players to throw their arms up in disgust or in frustration or even in disappointment (in themselves) after an umpire’s made a decision.

This penalty ignores that a lot of these responses are reflexive. In the heat of the moment the AFL is asking players to exercise censorship on themselves. A tense period in the game, the match in the balance, a decision – or, God forbid, a bad decision – goes against a player, and they’re meant to remain clinically cool?

And we qualify that by giving the umpires licence to respond like a spoiled child throwing a tantrum who’s given validation rather than education.

Somebody might throw out a spurious comparison, like, “You wouldn’t talk back to a cop, would you?”. Well, you might ask for clarification for a ticket. And you have recourse to challenge any offence through the courts.

I throw this out there because this needs to be looked at in isolation. This is the death penalty of penalties – you have no recourse. No appeal. No stay of execution.

Rules are essential in any game, I’ll grant you that. But there should be a reward or penalty for an act that affects the game. We have holding the man, incorrect disposal, push in the back, too high et cetera. But umpire dissent? This is tantamount to penalising a player for glowering at an opponent.

How does a player throwing their arms up affect the game? Does it get in the way of an opponent? Does it stop the ball carrier from taking action? Does it in any way influence the momentum of the contest?

No. The issue is it’s a bad look. We can’t have umpires opposed, can we? 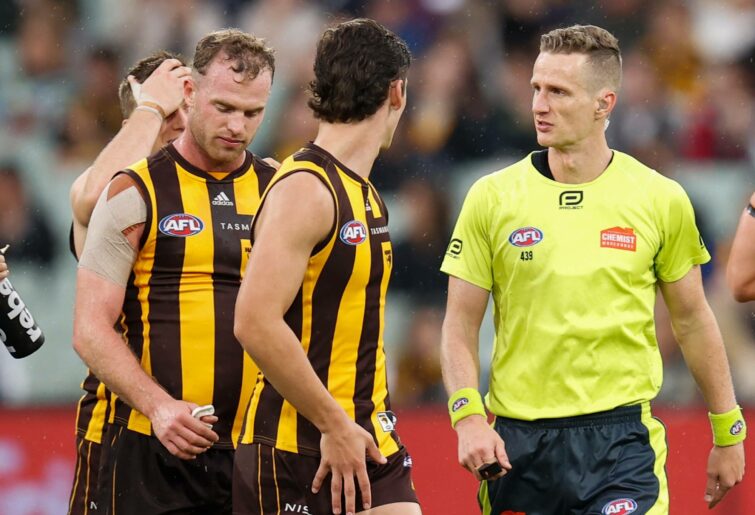 Because it’s such an epidemic in AFL, players rebelling against umpiring decisions. We’re nearing the stratum of how pro wrestlers treat referees. We can only be one act from a player striking an umpire or hitting them with a chair or throwing them out of the arena.

Even the worst incidents are only a speck of defiance that umpires have repeatedly shown they can de-escalate.

We actually used to pride ourselves on the fact we were allowed backchat. The old AFL promo has been doing the rounds on social media showing John McEnroe – legendary for his on-court tantrums – marvelling that AFL players could talk back to umpires.

If we no longer want that level of discourse, fine; penalise players who are overt. Although, in truth, even this is redundant. Just as umpires were instructed to throw the ball up immediately to dispel melees, getting on with the game would abruptly silence any protest.

There is absolutely no issue with players’ relationship with umpires, and vice versa. It’s just the latest bugbear. 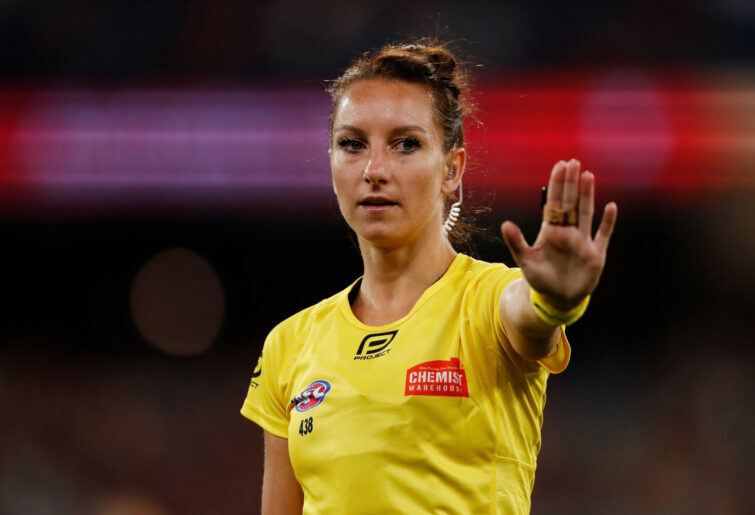 The biggest concern for the AFL is the aesthetic: how such demonstrations filter through lower levels and discourage prospective umpires coming through the ranks. You wouldn’t want to umpire if you got shouted at, would you? Geez. I wasn’t aware umpires were made of twigs and straw.

I can’t speak to whether Australian rules is short on umpires, particularly umpires who could graduate to AFL and AFLW ranks.

But if this is a genuine concern, the answer would seem to be simpler than asking players to become mindless, emotionless, mute automatons.

If umpiring were professional and they were paid obscene amounts, it would entice people to choose it as a career.

If umpires were professional – if they studied rules and interpretations every day (it remains an aberration that interpretations vary from not only game to game but also quarter to quarter), if they practised centre bounces, maybe we’d actually get some consistency and uniformity not only through a game but through a season.

Surely, just as players do, they could also perform clinics promoting the game and their vocation. You want the public to have a better relationship with umpires? This is the way.

This whole thing about players being disallowed from expressing any emotion in the direction of the umpire is a horrible overreaction to a problem that didn’t exist.

What it has done is introduce yet another unwanted rule that will be applied haphazardly, have an unwanted impact on games and potentially influence, if not decide, an outcome.

That’s the primary worry. However well intentioned this is conceptually, it’ll just be a matter of time before it becomes idiosyncratic – a novelty that’s there one moment, then not there the next three. How long until that occurs? It’s already happening, just as it always has with so many kneejerk reactions.

That’s something the AFL should truly weigh up. What is the bigger problem: that players occasionally vent their frustration or that we have yet another interpretation that’ll exasperate everybody with its inconsistency and selectivity?