The Roar
16th May, 2022
58
Join the conversation
Advertisement
Write for The Roar

Hawthorn star James Sicily will remain at the club long term after re-signing on a lucrative deal until the end of 2027.

The 27-year-old defender could have been one of the biggest names on the open market and has been in career-best form for the Hawks but he committed to Sam Mitchell’s side after recently getting a taste of the captaincy when Ben McEvoy was out.

He is averaging a career-high 23.3 disposals and almost three intercept marks per game in nine outings this season.

“We couldn’t be happier to make James a Hawk for life with this contract extension,” Hawthorn national list and recruiting manager Mark McKenzie said.

“This deal demonstrates James’ strong commitment to the club, as he continues to develop his leadership capabilities.

“After starting his career up forward, James has since become one of our most reliable defenders, with elite rebounding capacity.”

Richmond coach Damien Hardwick concedes Marlion Pickett is unlikely to have his one-match ban for rough conduct overturned at the AFL tribunal.

The Tigers will challenge the suspension in the hope of having Indigenous star Pickett cleared to play in Saturday night’s Dreamtime match against Essendon at the MCG.

The match is the centrepiece of the AFL’s Sir Doug Nicholls Round, and Pickett and his partner Jessica Nannup have designed Richmond’s Indigenous jumper this season.

Pickett was suspended for a high bump on Hawthorn’s Dylan Moore last Saturday, which was graded as careless conduct, medium impact and high contact.

Moore underwent a concussion assessment but was cleared to continue playing.

Pickett’s case will be heard at the tribunal on Tuesday night, with Hardwick noting the AFL has put the onus on players to avoid head contact.

“It’s heartbreaking in a way because the reality is, to the letter of the law, he probably struggles to get off because of the change of interpretation last year,” Hardwick told Fox Footy.

“This guy’s had an incredible story, he’s designed our jumper for the game.

“It’s a football act but I do understand that the rules are in place for the head-high contact stuff.

“It’s tough. Unfortunately it has to be perfect these days, and that’s the challenge.”

Melbourne and West Coast are unlikely to challenge suspensions handed down to Kade Chandler and Liam Ryan respectively over incidents that occurred during Sunday’s clash at Optus Stadium.

Demons rookie Chandler has been handed a two-match ban over the dangerous tackle that put the Eagles’ Luke Foley into concussion protocols.

“It’s a tough situation,” Melbourne coach Simon Goodwin said. “I can only go by Kade’s reaction, he’s shattered he’s had that impact on the player.

“It’s a really difficult footy incident. It’s a chase-down tackle, he’s coming from a long way away at speed with a lot of momentum. We really feel for the lad.”

Ryan has been dealt a one-match ban for rough conduct against Jake Bowey. Ryan chose to bump and made contact with Bowey’s head in an incident graded careless conduct, medium impact and high contact.

Bowey played out the rest of the match. 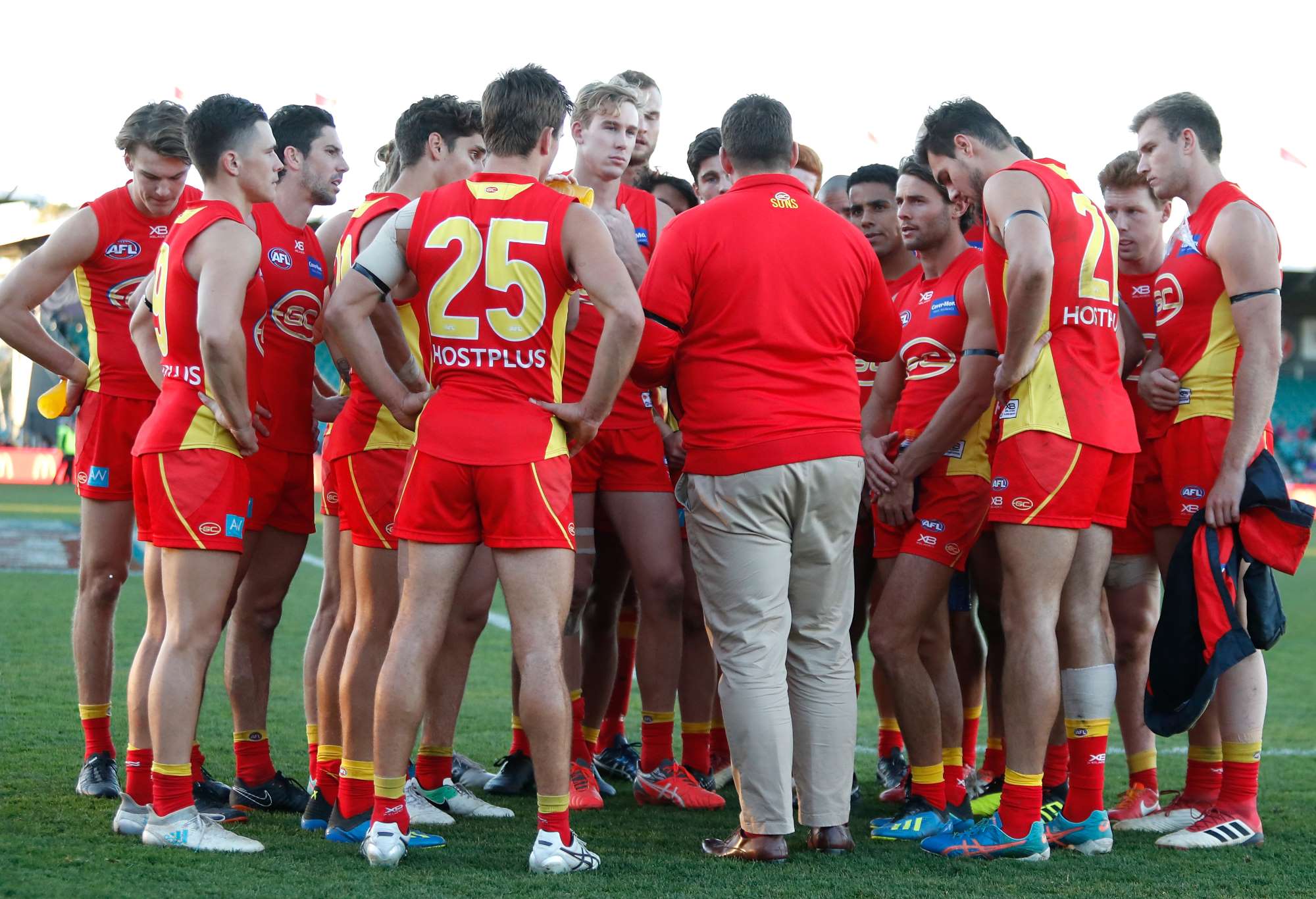 Gold Coast coach Stuart Dew is as confident as ever that he will earn a new contract with the AFL club despite the looming spectre of Alastair Clarkson.

Four-time premiership mentor Clarkson has declared he will consider offers to return to coaching next season.

The GWS job is available after Leon Cameron stepped down last week.

But there is widespread speculation the AFL wants Clarkson in the tough Gold Coast market, where the Suns have struggled to make an impact since joining the competition in 2011.

Dew is off contract at the end of this year but has public support from the Gold Coast hierarchy.

The 42-year-old, who has a 23-1-68 record over five seasons, is confident he will be given a new deal to continue on the path he has led the playing group down.

“I am, is the short answer, and probably the only answer I need to give because that’s how I feel,” Dew told Fox Footy.

“I’m a bit like the players, I’m getting towards that 80 to 100-game mark and I feel really comfortable in my own skin, and in and around the group.

“Our players across all demographics have committed to the club and obviously I’m a big part of that … we’ve got a great environment up here and we’re enjoying where we’re going.”

Clarkson, for whom Dew was a key player in Hawthorn’s 2008 premiership, said last week he felt sick being linked to the Gold Coast role because of the pair’s connection.

Dew said he has not had any contact from Clarkson in recent times.

“My absolute focus is on the team and club, and I think that’s where it needs to be,” Dew said.

Dew has led Gold Coast to upset wins over top-eight sides Fremantle and Sydney over the past two weeks.

Their 4-5 record has confounded the critics and put the Suns on the verge of the finals places ahead of Saturday’s clash with the Western Bulldogs in Ballarat.

Carlton are hopeful Zac Williams will return to provide a late to boost to their AFL finals bid after scans confirmed he has a high-grade calf strain.

Williams is expected to be sidelined for the next 10-12 weeks, having sustained the injury during the opening quarter of the Blues’ 30-point win over GWS on Sunday.

The result moved Michael Voss’ side back into the top-four with a 6-3 record ahead of Friday night’s clash with Sydney at Marvel Stadium.

On Monday, Carlton head of football Brad Lloyd indicated Williams will be eyeing a return in the latter stages of the home-and-away season.

There had been fears the dashing defender’s season would be over if scans had revealed an achilles tendon injury.