AFL NEWS: Swans unsure on Martin but star has Hardwick's blessing if he wants out, Pickett banned, Rohan ready

Parker was caught on camera embarrassing Shiel for backing out of a contest during Sydney’s 58-point smashing of the Bombers last Saturday night. Essendon and Shiel have come under-fire for not firing back at Parker for the sledge as the Bombers slumped to 2-7.

But Parker has also attracted some criticism for taunting Shiel in the first place. Longmire admitted the incident was briefly brought up in the Swans’ review of the round-nine game but they had quickly moved on.

“I have absolute support of Luke Parker and I think Luke Parker’s history suggests he plays the game in the right way; I don’t think this is a behaviour that’s been repeated too often. We touched on it as part of the review, we didn’t talk about it for too long at all.

“Luke’s record speaks for itself, he’s a wonderful servant for our footy club and plays it in the right way and that’s the way he’ll continue to play.”

The Swans will need a replacement for James Rowbottom after the midfielder failed to overturn his one-game suspension for rough conduct. Longmire believed Sydney put up a strong case to the tribunal but accepted the decision. 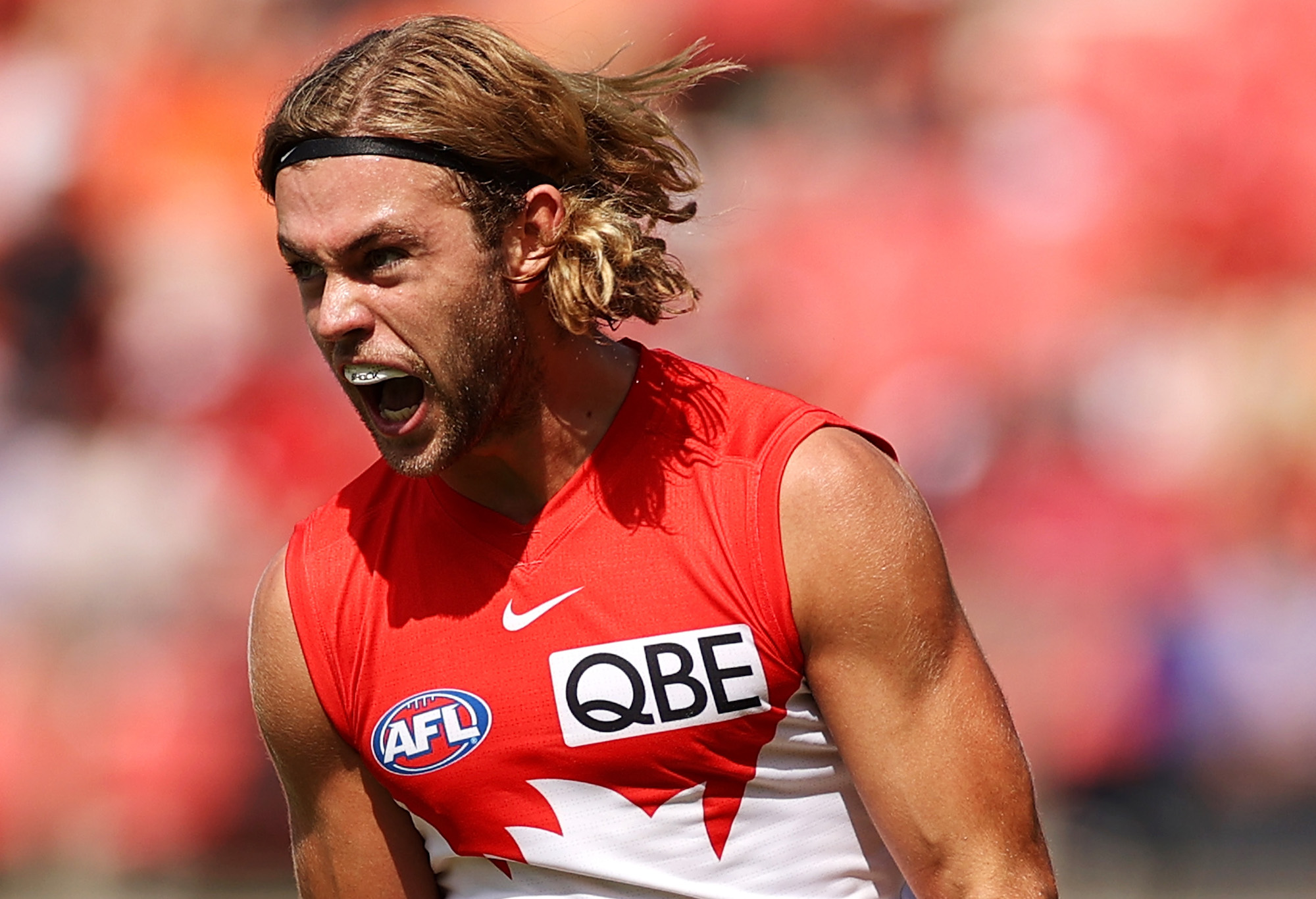 James Rowbottom is one of the AFL’s rising stars. (Photo by Cameron Spencer/Getty Images)

Rowbottom will miss Friday night’s blockbuster clash with in-form Carlton at Marvel Stadium and Braeden Campbell could replace him after being managed out of the game against the Bombers.

Meanwhile, Longmire played a typical straight bat when asked about the possibility of Richmond superstar Dustin Martin requesting a trade to Harbour City.

“We haven’t spoken about him, so I’m not sure what that leaves us,” Longmire said. “It’s not something we’ve discussed.

Martin has Hardwick’s blessing if he wants out

Richmond coach Damien Hardwick has given Dustin Martin his blessing if the Tigers superstar wants to leave the Melbourne AFL fishbowl.

The three-time Norm Smith medallist is two games back from his six-week break from the AFL due to personal reasons.

Martin took a leave of absence from Richmond after the Tigers’ round-one loss against Carlton as he continues to grieve the death of his father last December.

Rumours have floated around about the 30-year-old wanting to live a more private life outside an AFL-obsessed state and move to Sydney.

Hardwick on Tuesday addressed the possibility of Martin finishing his illustrious 263-game career away from Punt Rd.

“He’s a very important player to our footy club, on the field and off the field,” Hardwick said ahead of Richmond’s Dreamtime at the ‘G blockbuster. What he gives us, he’s paid us in spades. Whatever Dustin’s decision is moving forward is up to Dustin and to be honest he has my blessing.

“What he’s given me, us, our fans, he has been incredible and whatever we get from here on in is a bonus. I’m just lucky I get to see him on a weekly basis perform and train the way he does. 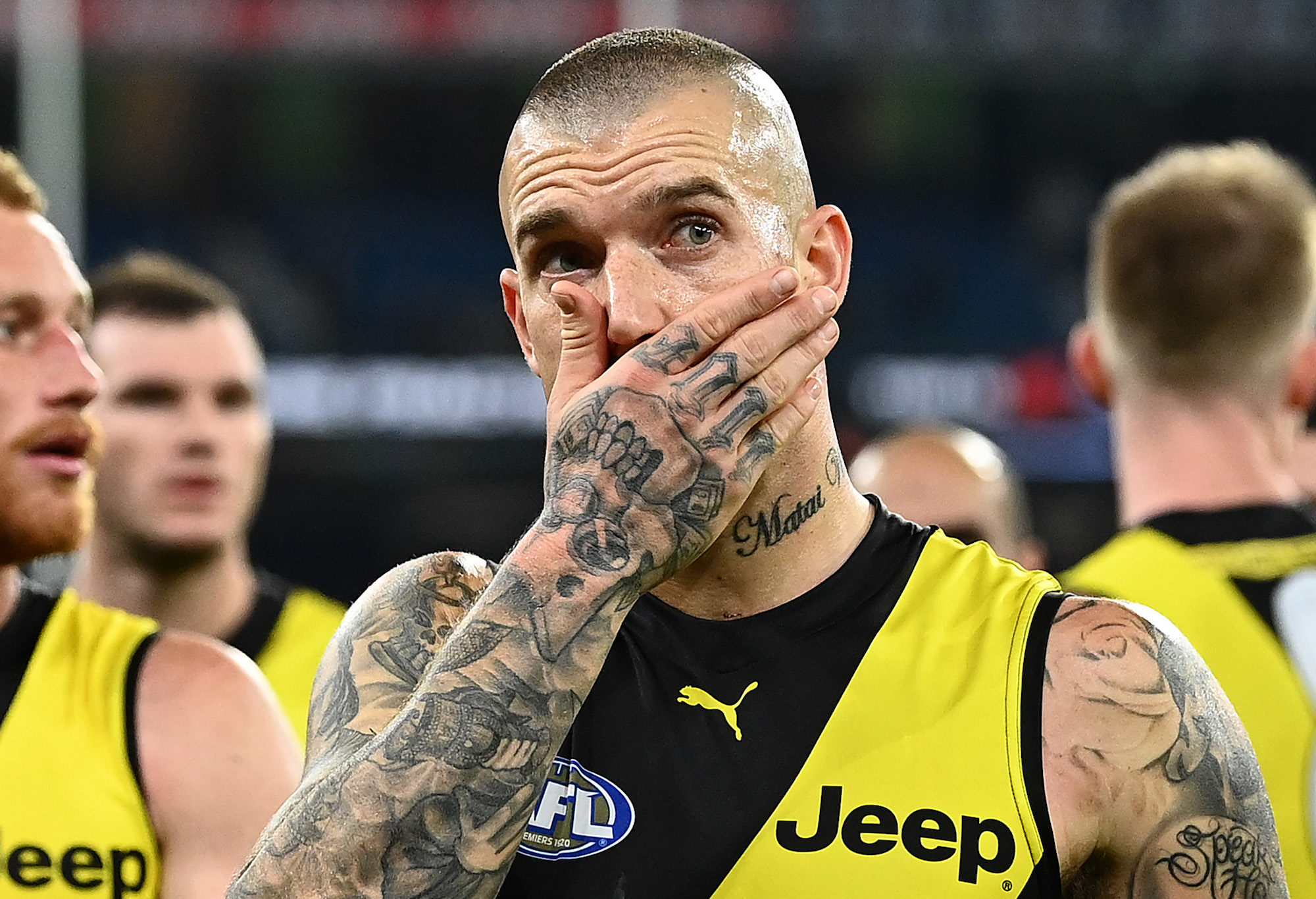 “He was a bit sore last week, he’d never put up his hand and say he was a little bit underdone. He’s a required Richmond player and a very important Richmond player.”

Hardwick hailed Martin’s influence in victories over Collingwood and Hawthorn as the Brownlow medallist played mainly as a forward.

“The way this guy prepares physically and mentally is first-class, it’s what the great ones do,” Hardwick said. “There’s no coincidence the work he puts in gets rewarded with his on-field performances.

“Even after (Tuesday’s training) session, he’s doing extra running because that’s the sort of performer he is. We use him as an example for our young blokes, ‘listen you want to reach that level, first of all good luck but this is how you go about it’.”

Martin was drafted by Richmond in 2009 and has become one of the club’s all-time greats in spearheading the Tigers to premierships in 2017, 2019 and 2020.

AFL legend Leigh Matthews believes it’s the first time he can remember a coach saying he would allow a superstar player to leave.

“I thought it was a very strange thing to say to be honest – I don’t know whether I’d be saying (Richmond) would support him no matter what and (Martin) would go with their blessing, it’s a very unusual comment,” the four-time premiership coach told 3AW.

“If anything, I would’ve thought it may open the door up to the thought that Dustin Martin may look to go elsewhere during his career.”

Geelong coach Chris Scott says Gary Rohan is all but certain to make his long-awaited return from injury in the AFL clash with Port Adelaide.

Rohan has been out of action after a sciatica issue in his back and hip hampered his summer program and kept him sidelined through the early stages of this season.

The 30-year-old has not played at senior level since last year’s preliminary final defeat to eventual premiers Melbourne.

But he has progressed through a “mini pre-season” program and shown enough form and fitness in two VFL games this month.

Scott said Rohan is on track to play at GMHBA Stadium on Saturday, with the Cats (5-4) looking to bounce back against Port Adelaide after suffering a 10-point defeat to St Kilda..

Richmond Marlion Pickett will not run out onto the MCG in the Tigers’ Indigenous guernsey he designed with his partner after failing to overturn an AFL suspension at the tribunal.

Pickett was offered a one-match ban for a high bump on Hawthorn livewire Dylan Moore during Saturday’s round-nine encounter. But the charge was upheld on Tuesday night with the Tigers failing to have Pickett’s contact downgraded from medium to low impact.

He will be forced to sit out the Dreamtime game, taking place at the MCG for the first time since 2019 after COVID-19 forced it to be held in Darwin and Perth during the last two seasons. Pickett and his partner Jessica Nannup designed the Tigers’ Indigenous jumper for this year’s Sir Doug Nicholls Round.

The 30-year-old argued he was only going for the ball when he decided to lay a shepherd on Moore so teammate Liam Baker could collect possession.

Pickett told the tribunal it was a safe bump that was delivered with a level of force of “three out of 10”.

“I dropped my level to make it safe because there was a height difference between me (and Moore),” Pickett said.

The AFL’s legal counsel Nick Pane said the incident could never be deemed to be low impact.

The 30-year-old’s rise to the AFL has been one of the most inspirational stories of all-time after he starred on debut in Richmond’s 2019 grand-final win.

Pickett has since played 45 games for the Tigers, including the 2020 premiership victory at the Gabba.

“The jumper he’s put on show is significant to him and his people and it’s just one of those events,” Richmond coach Damien Hardwick said earlier on Tuesday.

“He plays the game a hard, tough Richmond style and it’s unfortunate he finds himself in trouble with the tribunal.

“It’s a football act and goes into a contest not hoping to cause injury but we understand these are the rules of the game.”