They are approaching a professional rugby career from across the divide of the Trans-Tasman Sea, and from opposite ends of the age scale. Angus Bell and Owen Franks came together at the Leichhardt Oval, one in the sky blue of the Waratahs, the other in the canary yellow of the Hurricanes, when it seemed far more likely that the trajectory of their careers would keep them apart.

Franks has been there and done it, he is twice a World Cup winner with the All Blacks, and reached the summit of the provincial game in the Southern Hemisphere over ten seasons with the Crusaders between 2009 and 2019. It is no coincidence that those 10 years represent the peak of New Zealand dominance in the international game.

Franks was controversially omitted from New Zealand’s 2019 World Cup squad and his shoes were never been adequately filled by those who followed in his footsteps. The All Blacks were caught badly short of experience and leadership in key areas of the team at the time they most needed it, in the semi-final against England at Yokohama.

Since then, Owen Franks has spent more time on the injury table with a troublesome Achilles tendon than he has on the field, after a move to the Northampton Saints in England. But now he is back in Wellington and looking to make a statement ahead of the tournament in France.

“I’m trying to stay grounded and not get too ahead of myself, but I intend to be playing Super Rugby this year for sure.

“I don’t think I’ve been this pumped about potentially playing again in a long time. Especially with what I’ve been through with injuries the last year-and-a-half.

“If I can get back on the field and play to my potential, it will probably be the biggest achievement of my career. I fricking can’t wait.”

Franks will be 35 years old by the time the 2023 World Cup is played, but Crusaders’ halfback Bryn Hall overcame his shock at seeing him trot out in a yellow jersey, rather than the red-and-black sufficiently to see his potential value in one year’s time during a recent Aotearoa Rugby Pod:

“It doesn’t surprise me with ‘Owie’ and his mindset [to play for the All Blacks again].

“I was fortunate enough to be able to play a lot of rugby with him when he was at the Crusaders, and if you’re talking about one per-centers, get around Owen Franks and see what it looks like to be a professional rugby player.

“He’s even come back from an Achilles [injury] early. Honestly, just not surprised with how he is as a rugby player and how professional he is. I would not be surprised if he ends up being an All Black again because we know how strong he is at set piece.

“There’s nothing that would put it past Owie with his mindset, and so it was good to see him back on the field – bar it being in a yellow jersey.”

At the other end of the spectrum is Angus Bell, still only 21 years of age but already in his third season of professional rugby in New South Wales, and with 16 Wallaby caps under his belt. For a prop, that is like leaving the development nest before you have any stubble on your chin, maybe before your voice has even broken.

Despite his greenhorn status, Bell’s stats in ball-carrying and defence consistently rank at the top of the charts in the domestic game, and the 2022 season has seen concrete developments in his set-piece work. Saturdays’ match at a raucous Leichhardt Oval, with Sydney locals filling the natural amphitheatre of the hill to resounding effect, was no exception.

The New South Wales Waratahs dominated possession of the ball (over 90% after the first 25 minutes) and pushed out confidently to a 15-point lead, largely on the back of five penalties earned, and two ‘tries’ scored (one disallowed after review) from scrums. In the process, Angus Bell took the All Blacks’ aspirations of Tyrel Lomax at tight-head prop to pieces, while denting the scrum credentials of Asafo Aumua, the hooker picked to start alongside him.

The first two scrums, in the seventh and 11th minutes of the first half set the tone: 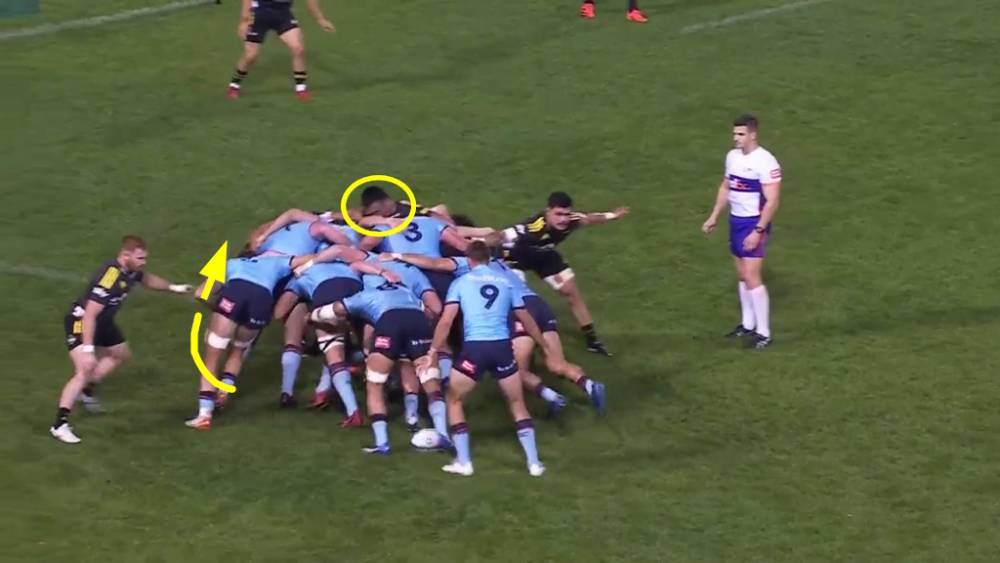 How did the young bull from New South Wales achieve a picture of dominance to the referee’s satisfaction? The whole Waratahs front row is working to accentuate the natural rotation of the scrum around the loose-head side, and Bell’s first action is to take a big step out to his left to assist in that process.

They say that a picture is worth a thousand words, and the current Springbok scrum-master Frans Malherbe ‘explained’ the mechanics to our very own Harry Jones off the record, after last week’s recent podcast had finished: 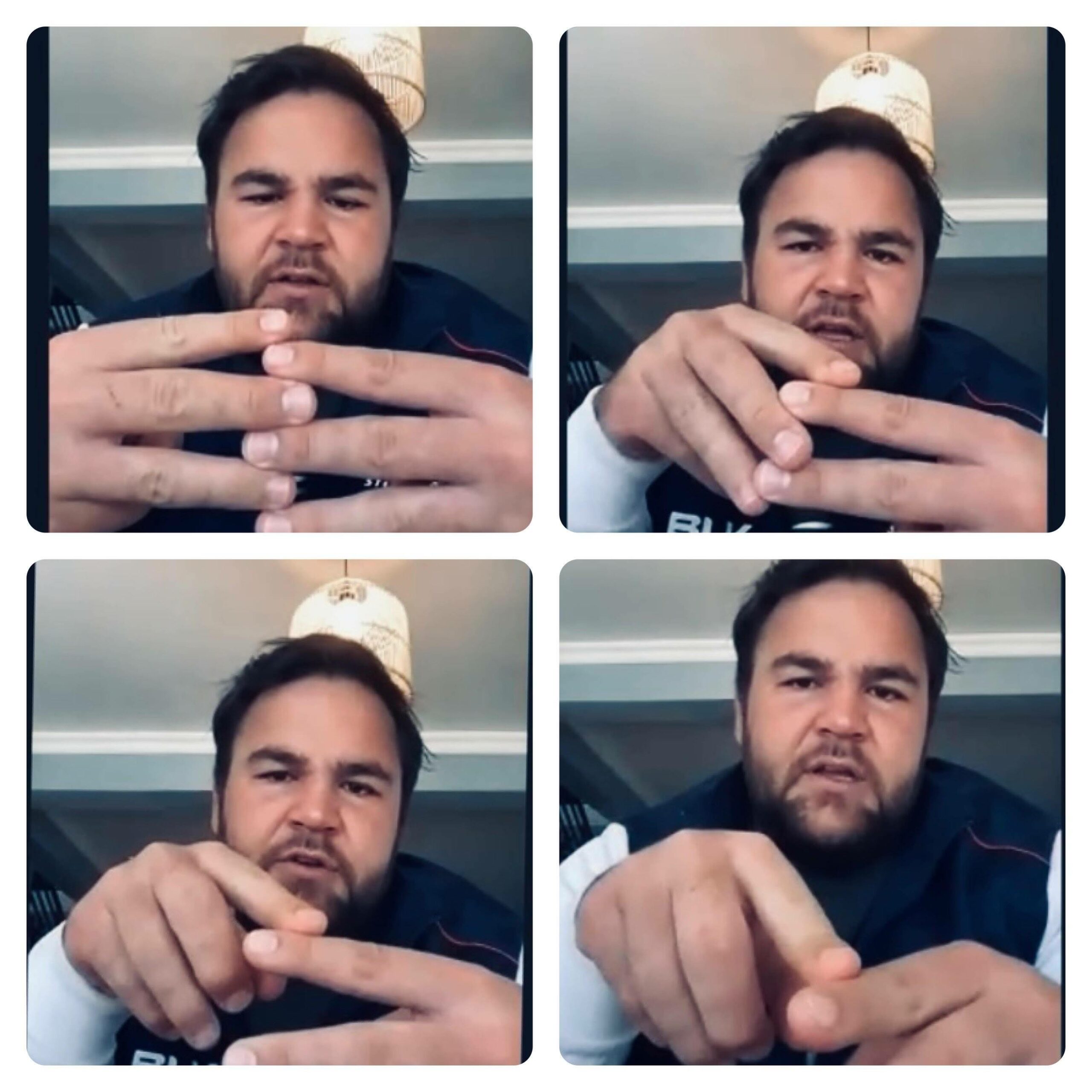 A straight-ahead three-on-three contest is subtly converted to three angling away from three, with ‘one’ nudging outside his opponent’s right shoulder and finally opposed by nothing more than thin air at the end. If the tight-head prop cannot remain directly in front of the loose-head at all times, the angle of the drive will force his hooker (Aumua in the two examples) to pop out, and that will in turn trigger a decision from the referee.

Positive outcomes for Angus Bell always begin with his success at forcing scrum height well above the level of the hips: 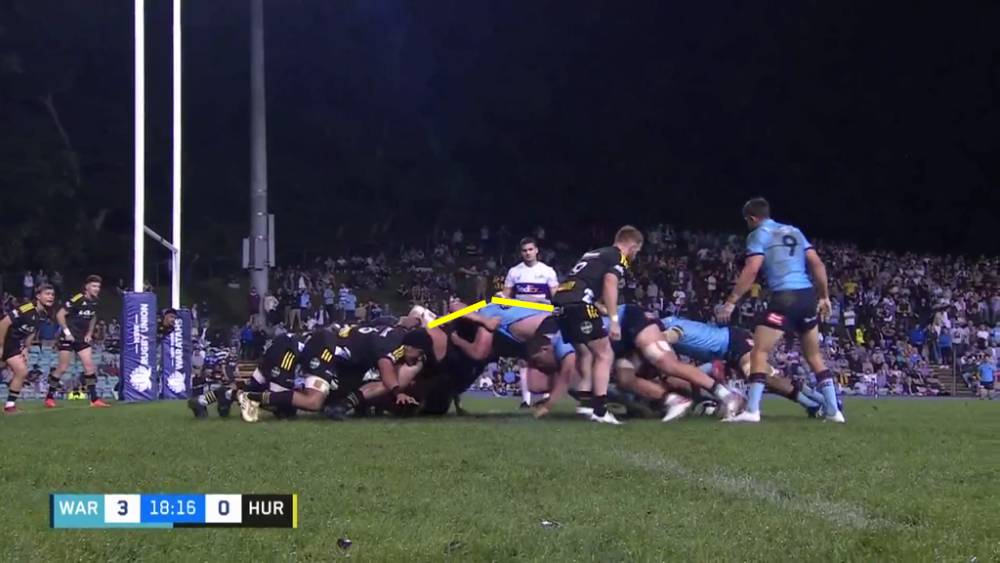 Whenever Bell can push up into that ‘pitched roof’ apex at the top of the scrum, his opponent is in trouble. In this instance, Tyrel Lomax has to drop his right foot back and that leaves his body in one long, frail, over-extended line. He can no longer control his right shoulder, the front rows pop up, Bell walks forward unopposed and Rahboni Warren-Voyasaco scores.

Even big Frans himself could not contain Bell when he achieved his ideal power position at a 2021 Rugby Championship set-piece:

Only half an hour into the game, Lomax was ‘gone’ and had disappeared mentally and physically from the contest, on both sides of the feed: 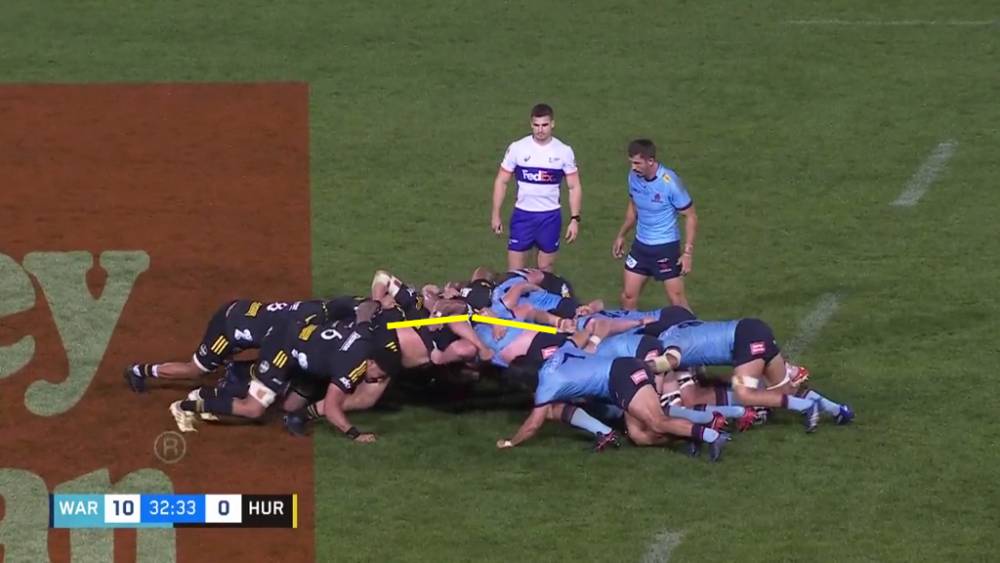 Again, the tell-tale ‘pitched roof’ at the apex can only foretell disaster for an over-extended tighthead prop.

The winds of change began to blow as early as the 34th minute of the first half, with the unprecedented tactical substitution of one current All Black prop with one of his grizzled predecessors in the black jersey. The impact of Owen Franks off the bench was instantaneous:

As soon as Franks feels the pressure, he sinks his chest forward, towards the ground. Instead of lengthening out and getting taller like Lomax, he drops inside and makes himself a smaller target.

That in a nutshell, is the issue facing Angus Bell as his international career broadens and moves towards the centre of the spotlight – as it undoubtedly will. He can handle the bigger men (both Bell and Lomax are well over 6’4 in height); the struggles begin with the shorter, more compact tight-heads who are able to scrum at a lower height and keep Bell out of his power position.

Oli Jager won three penalties by collapsing the scrum in the game between the Waratahs and the Crusaders, and at 6’1 Franks was able to refresh the same picture in the referee’s mind: 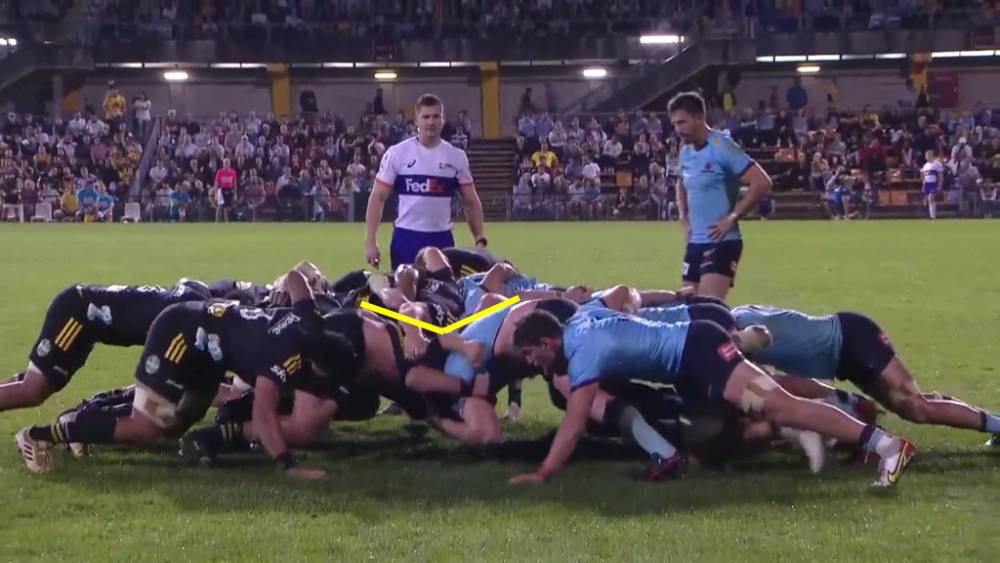 With the apex of the scrum pointing down not up, Angus Bell’s long back describes a curve and it allows the official to bail out with a ‘hinging’ penalty against the loose-head prop. With Owen Franks on the field, the Hurricanes won the scrum penalties, and the remainder of the match by 22 points to 3.

This bail-out was exactly the course of action chosen by English referee Luke Pearce in the Rugby Championship match which Bell started against the redoubtable Malherbe:

Two of these three instances ended in penalties against the young Australian, even though he is not obviously in retreat at any of them. It is Frans Malherbe (like Owen Franks and Oli Jager over recent weeks) who is actively lowering the height of the scrum and therefore risking a collapse.

It raises a critical point of law, the interpretation of which will be important for coaches like Dave Rennie, because Angus Bell will be a mainspring in their plans for the future.

19.10 (a) The front-rows adopt a crouched position if they have not already done so. Their heads and shoulders are no lower than their hips, a position that is maintained for the duration of the scrum.

If the tight-head prop is forcing his chest ever closer to the deck in the course of the engagement process, is he not is the man driving the movement of heads and shoulders below hip level? If so, why is refereeing trigger pulled on his opponent? Questions, questions.

“There is a tide in the affairs of men. Which, taken at the flood, leads on to fortune”. Those are the words of Brutus to Cassius in Shakespeare’s Julius Caesar. The tide of affairs in the rugby careers of two of the props in opposition at the Leichhardt Oval on Saturday are both rising, for very different reasons.

Angus Bell is the huge young hope of the propping fraternity in Australian rugby. He is improving by the game and stands every chance of becoming the Wallabies’ number one #1 before the World Cup in France begins.

Owen Franks has been the invisible man for the past three years, despite a 108- cap career with the All Blacks between 2009 and 2019. When Steve Hansen pulled the plug in his front row choice for the 2019 World Cup squad, it looked very much like Franks’ time was done. An ill-starred, injury-hit spell at Northampton in the U.K only confirmed the impression.

Fully fit for the first time in three years, Owen Franks is back with vengeance – not in his beloved red-and-black, but in the canary yellow of their mortal enemies, the Hurricanes. To use his own worlds, he is ready to give top level rugby one last shot, and he can’t fricking wait.

With no obvious choice for New Zealand at tight-head prop, he may well come back into the World Cup reckoning, and tow in other old hands like Dane Coles along with him, just for the ride.

Can ‘Owie’ resist the imprecations of old Father Time and hold him off for long enough to enjoy one last hurrah? Can Gus confound the confirmation bias which whispers that he is just a wee bit too tall for the international scrummage?

The naysayers will tell you that they cannot make it. Don’t believe them for a second. Franks and Bell may be approaching France 2023 from opposite ends of the career spectrum, but both young and old have the strength of will to prove the doubters wrong. It is just a matter of time.