Tipping sucks again. I’d be pretty happy to leave it there, if I’m honest, and I’d even leave last week’s results out completely if I could.

Can I leave last week’s results out completely? Maybe I can?

I probably can’t. I’d imagine Tony would want something by way of an intro and some level of acknowledgment of last week.

But why must we dwell on the past? Nick McArdle had it right on last weekend’s Stan and Nine broadcast, that perhaps we do spend too much time looking backwards in the rugby world? I mean who cares about past results?

What do they ever really tell us? I can’t think of anything meaningful, right at this point.

Anyway, I’m running out of time and space, so we probably should just move straight onto this week’s games.

And what a round it is. A super-sized round, in fact, with the addition of the Round 10 make-up game between Moana Pasifika and the Western Force on Tuesday. There are maybe only three of the seven games that feel fairly obvious this far out, and there’s no question the match of the round will be Saturday night’s top-of-the-table clash in Canberra between the Brumbies and Blues. An absolute ripper I’ll be pretty happy to see up close and personal.

If the playoffs positions were a long way off being decided before last weekend’s round, I suspect a couple of marbles will drop into holes after this weekend. Just don’t ask me which marbles though, because, you know, tipping sucks again.

Evidently it is true when they say it is a long way to the top if you wanna ruck and roll (approximately 14 rounds worth), though most only roll outside of the 22. That’s a little inside-joke there, backs won’t get it.

Anyway, onto the games which ‘seem’ straightforward.

Crusaders will have likely a field day and the Reds should find their first win to arrest their current losing streak, while neither of the Force or the Rebels look likely away from home. 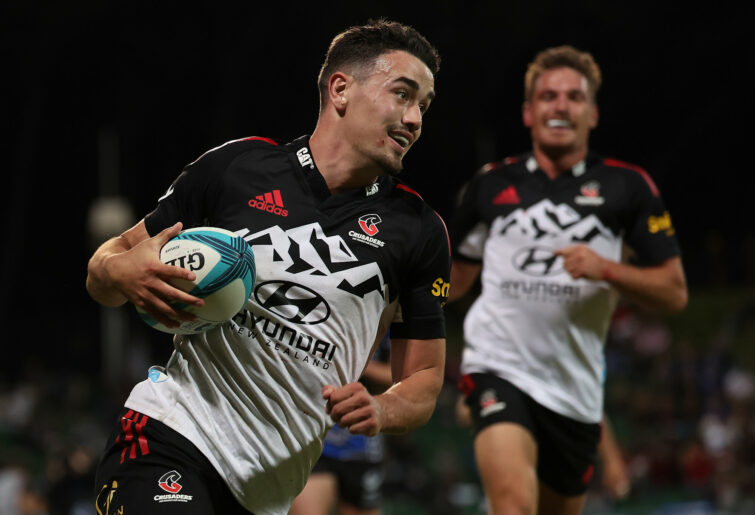 Will Jordan of the Crusaders runs in for a try. (Photo by Paul Kane/Getty Images)

The two toughest to pick games look to be in Canberra and Dunedin.

The Blues have had their wobbles away from their home pitch and the Brumbies do look the style of side that can frustrate them, knock them out of their rhythm. But with key personal missing and what I perceive as the Blues having ‘bigger’ guns, I will back the Blues to squeak this out.

The Waratahs are certainly a chance in Dunedin. Their improvement from 2021 is quite staggering and it promises to be a tight affair, however they have yet to show they can front for a full 80 minutes, while the Highlanders have certainly proven that they can. That ‘Perese’ spark missing is also rather unhelpful. Clan under the roof.

In the make-up game, I really don’t know. I want to pick MP but, in the end, I have decided to go with the Force and their stronger set piece (and a little less travel in the lead up) to get them home.

Sure thing: Coaches are now, in a cunning-like-a-weasel defensive strategy, informing their players to drag the opposition in possession across their own goal lines once their momentum in the tackle has ceased, resulting in goal line dropouts to ease the pressure. Very clever.

This has the feel of one of those, ‘it all looks straightforward’ weeks that turns out to be a trap.

Which doesn’t mean that, with things so close on the tipping ladder, it’s time to start second guessing and throwing darts at the prop’s knees, Codie Taylor style. So it’s the Crusaders and Reds on Friday night and the Chiefs and Canes on Saturday afternoon.

The Brumbies vs Blues match should make for far superior viewing than what will be on all of the main channels, with the Blues likely to have too many routes to victory. Sunday is the tightest match to tip, and while the Highlanders have definitely improved, I like the Tahs to finish the whole 80 minutes off this week.

The catch-up match won’t make for such compelling viewing and things will depend on how banged up each side is from the weekend. Force to notch an overdue win.

Sure thing: Clive Palmer has spent a squillion dollars telling us that, come Saturday night, Craig Kelly will be Prime Minister. That’s as likely as Jed Holloway winning Sunday’s match with a last-minute, 40-metre drop goal.

Each day, before the sun rises, Digger walks up a mountain. As he ascends, he digs in the dirt. He sees patterns in the earth. The sun illuminates his choices. Over time he has improved in reading the signs.

In the beginning he saw force. Now he sees Drua. Digger is our savant. He feels his picks. With his hands.

Laidlaw is lapsing. His coffee isn’t even his. He changes his name (Bread, Shawn, Biff, Pork Chop) daily. He spreads his spreadsheets all over his sheets. He collates. Indoors. He is falling.

The Crusaders are playing bully ball like the hallway pounders they are. Saders by 30. The Reds are not tackling like Queenslanders at the moment. Unfortunately for them, they welcome tackle-busting Moana who are mad about last week. I think this will come down to the last few minutes, but James O’Connor and Tate McDermott will save their blushes.

Hamilton will come alive as the zombie Chiefs lord it over the leaky Force. The leg-drive human-rights activist Hurricanes will clown the matador Rebels. The youthful Blues will prey on the aging Brumbies’ edge defence.

The Waratahs will almost provide the Aussie upset of the round in Dunedin! Coach of the year! (Get on our pod, man!) But the Highlanders have two nines now, and that’s like having a fullback at halfback.

And then the most difficult pick of all: Moana vs Force in a makeup. I’ll go with the justifiably outraged Moana who have got a screw job in their first season, for real.

Sure thing: the Kiwi hunt for a tight five to restore dominance over the Irish, French, Boks and dare I say it, the Wallabies, continues. The props are not scary. The hookers are hitting elbows and knees of jumpers. Sam is starting to resemble a Dickens character. Lord is bony. Vai’i is super, but a bit short. Who will step up?

Right then, not over-thinking this, straight into it.

Crusaders will be too good for the Drua, ditto Queensland at home to Moana Pasifika, and double-ditto for the Hurricanes over the Rebels. Three out of seven looked obvious, remember. Bish, bash, bosh.

Less obvious is what happens in Hamilton, now that COVID has popped around for a second go. Being at home will be a big positive though, considering the distance the Force have to travel. How far, you ask? Well, there’s a suggestion they left Perth before halftime last weekend.

There’s a hint of desperation about the Brumbies this week, a determination to prove that last week’s first half was the exception rather than the rule, and to try and edge closer to the top-two carrot that’s still there in front of them. But it’s the Blues, so have no doubt that I am somewhat pooing my pants about this game.

And the Waratahs will play like the pressure is off this week, because it probably is. Darren Coleman conceded last week that fourth is probably out of reach, so now they’re just playing to see where they travel to in a fortnight’s time. Plus, the Highlanders’ attack is still a bit up and down.

And to finish on Tuesday, whoa, maybe the hardest pick of the weekend. No idea of what state either team will in after the weekend, so it’s all a bit of a guess. And I’ve landed on the Force. Because they’ll be in Auckland Sunday morning.

Sure thing: the Brumbies are playing at home, in Australia’s National Capital, on the night of a federal election. It’s going to be a terrible pun-fest: things like big swings one way or the other rather than momentum changes, landslide victories, declaring winners early, vote one, concession speeches; the lot.