We’re only at round ten, and already half of Carlton’s wins in this remarkable 2022 season have followed near-identical patterns.

Utter domination in the first half, set up by a complete dismantling of their opposition at the coal face, plenty of ball for their star midfielders, and a plethora of supply for their talls in attack.

Then, as if like clockwork. They stop. Their opponents get a run on, first one, then two, then five or six goals, and suddenly the deficit is whittled down to its foundations.

But come what may, whether their lead got to 50 points or 30, the Blues find a way to hold on at the death. It’s rarely simple, it’s rarely without panic, but a series of crunching, inspirational tackles, or monster contested marks, are always on hand to save the day.

So it was against Sydney, almost to the letter. This time, the lead was 38 points at half time, courtesy of a magnificent nine-goal second quarter that had Blues fans partying like ’twas 1995. The comeback this time got it to eight points, before the Blues, led by their coolest heads and a young star in Zac Fisher beginning to go places, steadied to win by 15.

We’re told over and over again that close games are, in the long run, a lottery. But the Blues have already done it four times this season – five if you count their pre-season win over Melbourne. It’s almost spooky how similar the pattern has been against the Western Bulldogs, Hawthorn, Port Adelaide and now the Swans.

Have they found a way to crack the thriller code, or have they burnt up all their luck by the midpoint of the year?

One thing’s for certain – if the Blues can find a way to maintain their midfield dominance over the course of a full four quarters (heck, even three), there would be few sides in the competition that can match them. With the Swans having already shown a weakness at the coalface at stages in 2022, and persisting with clearance king Josh Kennedy finishing his glittering career on the wing, the first half at Marvel Stadium was a slaughterhouse.

Only the Blues’ inaccuracy, and the Swans’ ability to make the most out of the smallest scrap of a turnover, gave the visitors a one-point lead at quarter time. With Charlie Curnow looking imposing with two goals, and the Blues finishing with 37 more disposals and a whopping 19 more contested possessions for the term, anyone could see the Swans were merely holding back the tide.

But the dam wall burst after quarter time; what followed was one of the most dominant quarters of the year. This was Carlton at their most terrifying, the version of this building Blues outfit that can most definitely challenge even Melbourne and Brisbane for supremacy. Unstoppable in close – even with Jack Silvagni, Patrick Cripps and Matthew Kennedy doing their fair share of ruckwork against Swans duo Tom Hickey and Peter Ladhams – and with their forward line beautifully set up to give Curnow all the space he needed, it was a bloodbath.

Curnow, the match-winner with six goals (five from the first half), made a very good defender in Tom McCartin look like a clubbie. From giving away holding free kicks in blind panic, to dropping easy intercept marks, the younger of the McCartin brothers had his colours well lowered… and Charlie, a younger brother himself, wasn’t about to let him off the hook.

Virtually every time he went near the ball, he looked dangerous, putting concerns the extra pressure on his shoulders due to the absence of Harry McKay would affect his output to bed. Most encouragingly of all for Michael Voss, his goals came in a myriad of ways: booming kicks from well outside 50, free kicks from terrified defenders, marks on the lead, crumb work near the goalsquare… you name it, Curnow did it.

At his feet, Corey Durdin and Matthew Owies have seemingly benefitted from McKay’s absence, with fewer balls being clunked by the big-marking spearhead meaning more spillage for them to mop up. Three goals between them, plus one more for second-gamer Jesse Motlop, might not seem like a whole lot; but add in their relentless pressure, and impressive ability to occupy Swans defenders and leave room for Curnow to strut his stuff, and their impact goes beyond mere stats.

As good as Curnow was, though, he couldn’t have dominated thus without the Blues’ utter domination in the middle. It’s getting hard to remember that the Blues finished in the bottom four for both clearances and contested possessions last year under David Teague. With new cattle and a new set-up under Voss, the transformation in marked: they’re now sixth and third in those stats respectively, behind only Melbourne and Brisbane for contested ball.

Hewett, magnificent in tight with nine clearances and 17 contested possessions, has been a revelation – and as an aside, exactly the sort of player the Swans could really use at the coalface right about now – while a reborn Patrick Cripps, the hard-nosed Matt Kennedy and another recruit in Adam Cerra are all doing their bit too. It’s Cripps that gets most of the plaudits, but Hewett would have to be deep in consideration for an All Australian gig right about now.

Sam Walsh, too, has relished a more outside role than he had become accustomed too last year, with so many big bodies in tight. His run and carry was electric to repeatedly turn a handball chain for the Blues into something of great significance, while his ability to win his own ball remains strong. I’d have still given Hewett best-afield honours, but you can expect 34 disposals from Walsh to get him the three Brownlow Medal votes.

The Swans managed three goals from just five inside 50s for the term – they did well to get that many. A bright spot all night, Logan McDonald enjoyed the breakout game those in the know have foretold was coming. Marking beautifully on the lead and clever when the ball hit the ground, he had three by half time to help cover the hiding Jacob Weitering was giving Lance Franklin. 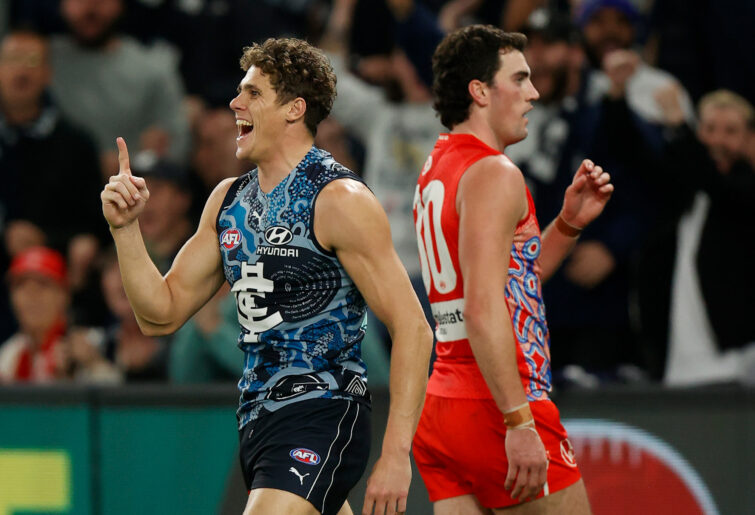 Charlie Curnow of the Blues celebrates a goal. (Photo by Michael Willson/AFL Photos via Getty Images)

But whether it’s fitness or the Swans finally working out how to curb their influence, or possibly both, the second half couldn’t have been more different. Led by Callum Mills and Luke Parker’s tireless efforts in close, the Swans turned the tide at the source – having been 88-59 down in the contested possession count at the break, the visitors shaded the stat from therein, 73-78.

The Blues weren’t helped by a five-day break following last week’s win over GWS… but then again, they’ve shown this year they don’t need much of an excuse to fade like Marty McFly’s siblings in that picture in Back to the Future.

The result? Funnily enough, with the Swans looking to kick at every feasible opportunity – they’d go 224-115 in the kick-handball ratio – more ball meant more forward forays, which made the Blues’ defence look, not for the first time this year, vulnerable.

With 34 extra marks for the second half, too, the Swans finally got their usual neat ball movement going, as the fatiguing Blues struggled to close space as they had early on.

Tom Papley burst into the game, shaking off some close attention from a number of Blues including Lachie Plowman. He’d benefit from some newfound dare: the loss of Josh Kennedy to a serious-looking hamstring injury opened the door for the younger, quicker and more incisive Braeden Campbell to show off his kicking skills with a number of penetrating passes off a wing. Another youngster in Errol Gulden, too, was superb, after being blanketed by the Blues and pressured whenever he got it in the first half.

Try as they might to steady the ship, the Blues’ attempts to shake off the Swans just ended with them sinking further and further into the quicksand. If they tried to slow the game down, the Swans would force a kick to a contest, duly win that contest, and put the defence under siege again. If they went down the middle and attacked, they’d hit trouble there, too: whether it was a brilliant run-down tackle from the lumbering Ladhams, or a horror kick after a 50m penalty from Durdin that the running Justin McInerney picked off, surged forward and found Papley for the first goal of the last term, breaking a 12-minute stalemate.

By midway through the final quarter, the Swans had 21 of the last 26 inside 50s, and were just eight points down. All the momentum was with the visitors, while the Blues were seemingly hanging on for grim death. Only Weitering, with a pair of superb intercept marks, and some misses from a hitherto deadly accurate Swans, was keeping them in front.

So what happened? The same thing that always does for the Blues. A towering mark here from Tom De Koning, who took four of them in a wonderful final term; a crunching tackle there from Hewett, reasserting himself on his old side after a quiet third term.

And after some close misses, the killer blow arrived via Zac Fisher, whose run and zip all across the ground had been notable throughout. He deserved to finish off the Swans at last.

Winning close games doesn’t normally last in footy – think of Port Adelaide, who went from 5-0 in games decided by under three goals in 2020 to losing the preliminary final that year to Richmond by six points, to going 5-0 again in 2021, to 1-3 this year. All logic says this Blues run of good fortune – and yes, they could easily have lost any one of these four wins – can’t last too much longer.

But who cares? Certainly not Blues fans – their team is now 8-2, virtually assured of finals, and one statement win over a Brisbane or Melbourne away from being seen as a legitimate premiership fancy.

And as their blistering second term proved once again, their best is more than good enough to threaten anyone going around.