Stuart Thomas
Expert
20th May, 2022
17
Join the conversation
Advertisement
Write for The Roar

Melbourne Victory took the most initiative in the first legs of A-League semi-final play, with a Jake Brimmer goal proving the only successful strike of the weekend and one that now demands Western United bring everything they have to the table in the return match on Saturday night.

Melbourne City and Adelaide United ended in a stalemate in the city of churches and now return to Melbourne for a Sunday afternoon clash to decide who will advance to the season’s final game just six days later.

It is brilliant for the competition that both semi-finals remain competitive heading into the second leg and despite the tipping nightmare 2022 has presented for all of us, the excitement surrounding the penultimate week of play is palpable.

This week, the panel are selecting the teams they believe will advance to the grand final after the second legs. That is a fairly straight-forward concept considering the 0-0 score line heading into the City vs Reds fixture.

Yet a tip for Western United would indicate a belief that the men in green and black will advance to the big dance and not merely in the second leg of play. Extra-time and penalties have been considered and the panel have looked deeply into their crystal balls to determine the winner of what looks yet another intriguing Melbourne Derby.

Good luck with your tips and be sure to enter them in the form below, as the voice of the crowd takes a two point lead into the final three matches of the 2021/22 season. Here is the way the panel sees all the second leg action unfolding and the teams they see as likely to face off in the grand final next weekend.

All the momentum is with Melbourne Victory following their tense 1-0 win over Western United in the first leg of this semi-final. They needed a moment of real quality from Jake Brimmer to get them over the line, but having registered a hard-fought clean sheet, they’ll feel confident of getting the job done in front of a partisan home crowd at AAMI Park.

Western United really miss the magic of Alessandro Diamanti to unlock a tight defence. They’ll put up plenty of fight in the second leg, but I suspect Victory might snatch a second straight win and book a place in the grand final in doing so.

Melbourne City were arguably the better side despite the first leg of this semi-final finishing scoreless at Coopers Stadium, and they’ll hope Jamie Maclaren is in slightly more clinical form in front of goal in the second leg.

Home favour should count in City’s favour here, and they’ll feel confident of knocking off a stubborn Adelaide United side that show plenty of grit and determination but aren’t always clinical finishers themselves. Just like the first leg, this is likely to be a tight and tense affair at AAMI Park. I suspect there might only be one goal in it, but I reckon it will decide the game in City’s favour.

After backing Western United in the first leg and watching keenly to see them stun the in-form Victory, Jake Brimmer spoiled the party with a stunning strike from the edge of the box. John Aloisi’s men were the better team early on, yet there did appear to be something inevitable about the subsequent onslaught mounted by Victory once they had ridden out the storm and steeled themselves for what was always to be a challenging confrontation with one of the best defences in the league. However, that Brimmer goal will prove the difference and after thinking United could well be on its way to a stunning grand final appearance, Tony Popovic will have his troops well prepared to defend a lead into which Western may struggle to make any impression.

The City v Adelaide rivalry continues on Sunday afternoon and after thinking that the Reds could get it done at home, only a brave soul would be backing them at AAMI Park in front of the City fans. Well, I’m a brave soul. The finals need an upset and this is going to be the one that throws the proverbial spanner in the works. Adelaide showed enough to beat City on Wednesday night and City also showed enough to win. Thus, this match will come down to a moment, perhaps even a penalty moment, with the Reds on their way to a grand final and another chance at A-League history. 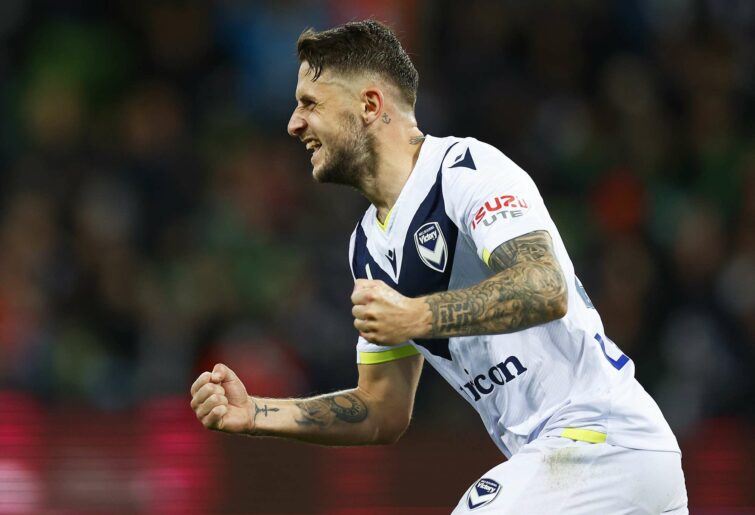 Western United looked impressive in their ‘home’ leg and it looked like a matter of time before they would score. With another ninety minutes to go and a bigger crowd for an early evening kick off, AAMI Park will have an intimidating atmosphere though and that solitary goal from Jake Brimmer on Tuesday could prove pivotal. Victory will be ahead on the night early, Nick D’Agostino finding the faintest touch on a Josh Brillante cross and the North End will be bouncing.

Neil Kilkenny’s precise through ball for Aleksandar Prijovic will result in a penalty that the man himself converts and a costly yellow card will lead to a second for Jason Geria as the game changes complexion just before half time.

A wild second half of Western United pressing and Victory counter attacks will give Dylan Pierias the chance to shine and he will deliver with a mazy run and shot up the right before gliding in to finish off a fantastic cross from Ben Garuccio. Late pressure from Victory will be in vain and Western United will advance to the Grand Final against all odds.

Melbourne City did everything to score in Adelaide and they’re due a game where their chances are converted.

An unusual early kick off will make for a terrific atmosphere at AAMI Park and City will power their way into the lead with two early goals from Jamie Maclaren and Andrew Nabbout.

With Craig Goodwin shackled and Lachlan Brook given no space or time, Adelaide will try route one, George Blackwood nodding down for Hiroshi Ibusuki to slam in a goal to drag the visitors back into the game at the break. The second half will be in the balance until the hour mark, when Marco Tilio dances through to set up a tap in for Maclaren and the floodgates will open; two further goals making this a devastating win for Melbourne City and rewarding them with a berth in the grand final next week.