Cronulla have got back to winning ways but were pushed hard by the Titans in a wet affair on the Gold Coast that ended 25-18 to the Sharks.

An early second half blitz was enough to get Craig Fitzgibbon’s men home, though they huffed and puffed before the break against a Titans side that refused to be put away.

The star was fullback Lachie Miller, who represented Australia at Sevens in the Tokyo Olympics and managed a try and over 250n running on NRL debut. He struggled at times with the kicking of Jayden Campbell, but was excellent with ball in hand.

Miller has impressed with the Newtown Jets in the NSW Cup and was given his first crack at top grade at the age of 27 after last week’s experiment in moving Nicho Hynes to fullback to cover for the suspended Will Kennedy turned into a disastrous misstep, with Canberra crushing the Sharks at Magic Round.

“He’s electric on his feet,” said Craig Fitzgibbon. “Coming up here, I wasn’t sure what the conditions would be and it has not stopped raining the last couple of days that we’ve been here, but thankfully it was firm underfoot so he could use his footwork. He’s very elusive.

“He’s a really good guy, a good person and very popular. Last night, doing the jersey presentation was a great night for our team.

“I’d be a brave man not to pick Will (Kennedy, who returns next week) but Lachie has shown that he is capable and does have utility value. Now that you can see that there’s an NRL player there, we can discuss selection later in the week.

“The guy has played in the Olympics, so the big stage is not an issue for him. The reason we wanted to sign him was for that. He’s a developed athlete: he’s turned 27 now, so as an athlete he’s developed and has big strength, power and fitness.

“He’s not scared of big moments. He had education footy-wise to catch up on because he hasn’t played the game for a number of years, but he’s very studious so once he gets that and continues it, he’s a good one.”

Hynes was excellent back in the 7 jumper – scoring one, creating one and kicking plenty – while Teig Wilton continued to stake his case as the best minute-for-minute player in the NRL with 124m from the bench.

The Titans’ defence has been their major issue this year, but has stiffened considerably of late. It was tested to the full by Cronulla and largely held up to the task with extended periods of pressure from one of the best attacks in the comp.

Eventually the dam broke, but Justin Holbrook can take a lot of solace from how his team hung in there, and in the manner with which they fought back to make life uncomfortable in the final moments.

“We fought really hard to half time to keep it six all but we didn’t have the same fight in the second half,” said the Titans coach.

“Three quick tries and then we’re trying to chase a game in tough conditions and we fall short. The disappointing part is that we leak one and should do something about it then rather than after three.

“I guess when the shackles are off we fight hard to the end, which is better than not fighting to the end, but we have to do better when its only the one try. That’s what we have to get better at quickly.”

The Sharks got their first inclination that the Titans might show up a little more efficiently in defence in the 13th minute, when Royce Hunt was halted at close range.

The first flashes of Miller then followed, with the former Sevens player dancing across the line, but Cronulla had to settle for a repeat set and nothing more.

The same resilience could not be seen at the other end.  Jarrod Wallace waltzed over to open the scoring, grabbing his second in as many weeks after a similar crashover at Magic Round against the Dragons.

Wallace went from hero to villain as his error invited the Sharks in and, despite good work on the goalline, Briton Nikora was able to offload to Blayke Brailey, who found Connor Tracey to equalise.

That improved defence remained to the fore in the first half as Cronulla piled forwards and dominated field position, but were repelled time and again.

Miller was then thrown violently into touch – a solid welcome to the competition – and more strong Titans defence managed to turn five sets from the Sharks away. The culmination was a trysaver from Beau Fermor to stop Nikora when the line was begging.

The Sharks got the best possible start to the second half. Katoa took a high ball within yards of his line, but moments later, the Sharks were in at the other end.

Siosifa Talakai was the architect, pushing wide early to Ronaldo Mulitalo, who dunked inside to Nicho Hynes. It was a classic Cronulla 2022 vintage try.

There was almost an immediate reponse from the Gold Coast, as a steepling Jayden Campbell bomb left Miller at sea, but Esan Marsters was adjudged to have knocked on.

The miss would be punished. Hynes returned the favour to Mulitalo via a lengthy, looping, no-look pass that sent the winger in at the corner.

Miller had got away with one after allowing the ball to bounce, and while he still struggled to get to the flight of kicks, the next fell in his favour.

A hop up from another Campbell bomb fell directly to the fullback with no chasers in front of him, and he was able to run it back through to the line from 70m out.

The Titans weren’t completely done. Their attack is still looking clunky, but when you have front-rower Jarrod Wallace in this try-scoring form, anything is possible.

Toby Sexton put a reverse kick along the slippery deck and somehow the big man stooped to pick up and score.

Esan Marsters then slipped over in the corner, aided by an excellent intervention from Campbell, to make things very interesting with three minutes to play.

Wallace, however, put paid to that. He was at the centre of everything, good and bad, and ended all hopes for the Gold Coast with a dropped ball returning the kick off. Hynes added a field goal to seal the deal, before getting binned for a professional foul with the siren blown. 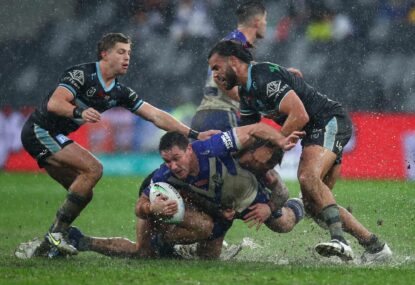 Declan Casey's first NRL game was over after 52 minutes when he was taken off on the Medicab, but fortunately was seen walking around… 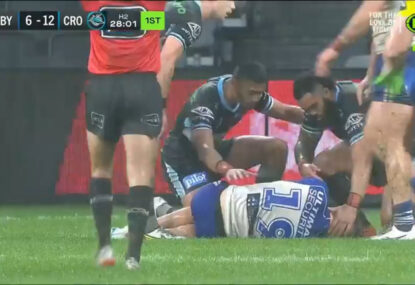 Matt Burton kicked his goalline drop out into touch, but the sideline official didn't see that it hit the line on the full -… 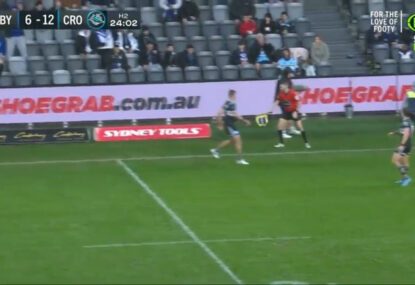 It came after a Matt Burton high kick forced an error from the Sharks, in the teeming rain. 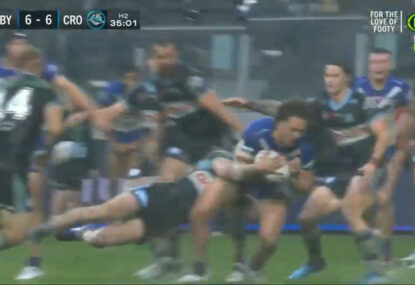 With over 60 per cent of possession in the first half, it took until the final minute until Jake Averillo turned it into points. 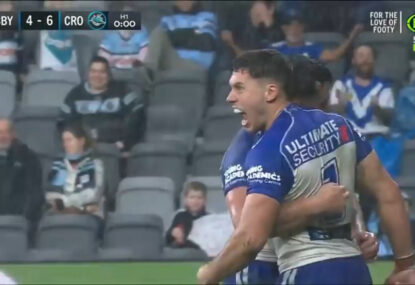