The Waratahs moved back ahead of the Reds into sixth place on the Super Rugby table with an impressive 32-20 defeat of the Highlanders – their first success in Dunedin since 2008 and first against Kiwi opposition in NZ for seven years.

The Waratahs bench was outstanding and carried the team home to a deserved victory after a torrid period in the second half.

The Tahs were boosted by a 28th minute red card as Highlanders No.10 Sam Gilbert lifted Wallabies captain Michael Hooper and dumped him dangerously into the turf.

“How many times have these guys been told you can’t lift guys past the horizontal? He landed on his head, there was no other option, they had to give him a red.”

It was a scary moment for Hooper and Australian fans.

“I don’t wish that on anyone,” said a clearly annoyed Hooper afterwards. “These things happen in the game. I was disappointed it happened to me and I wouldn’t want that on anyone. He should miss some weeks, I think.”

Scores were level at 7-7 when Gilbert made his error and the Tahs made hay with the one man advantage for 20 minutes with two further tries in the first half.

Before Nic Berry raised the red, the game had been a close battle and while it briefly opened right up for the Tahs they were eventually made to fight for second half supremacy before claiming the win.

The hosts had raced out to an early lead with a try just 2:09 after the start. The Tahs had lost possession soon after the kick off and with Aaron Smith buzzing away at the back of the Highlanders ruck the Kiwis took advantage when lock Josh Dickson crashed over.

It was a nervy start from the Tahs but they got a foothold, and drew level on 10 minutes when Will Harris charged onto a short pass near the ruck and burst straight through centre Scott Gregory and a tackle attempt by Dickson to score.

Gilbert’s error was startling and the Tahs moved in for the kill. With Berry warning the Highlanders that they were in danger of slipping down to 13 men after a series of infringements near their own line, Jake Gordon opted to keep the pressure on instead of kick for goal and it paid dividends.

Tane Edmed swung a long looping pass to put unmarked Mark Nawaqanitawase over on the wide right before Hooper scored an excellent solo try, scooping the ball up at the base of a ruck 25 metres out and fending off two challengers to get across.

“He’s super competitive, massively motivated player Michael Hooper,” said former All Blacks star Justin Marshall on the match commentary. “He’s one of the greats for Australian rugby and his record is impeccable. He’s such a gifted player.” 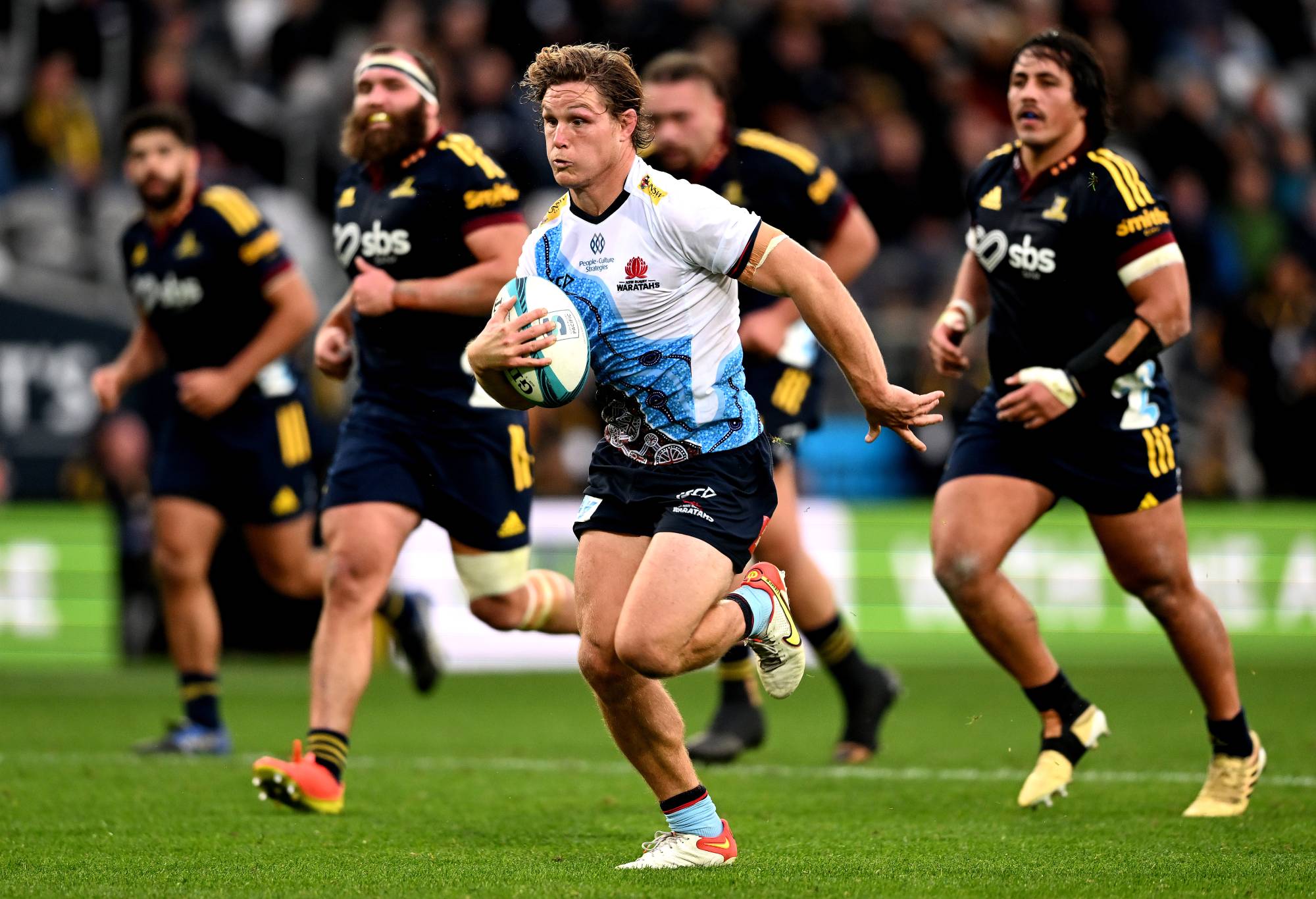 Michael Hooper of the Waratahs charges up field to score. (Photo by Joe Allison/Getty Images)

Edmed’s conversion made it 19-7 and it stayed that way until the Highlanders got their 15th man back – Marty Banks’ first touch being to kick a penalty to narrow the gap to nine.

The Tahs, who were run down late a week earlier by the Hurricanes after leading for most of the match, started to wobble and the day turned sour when Paddy Ryan was yellow carded, his head crashing into Dickson’s at a ruck.

Berry found mitigation in the fact Dickson shifted his head down towards the ball as Ryan arrived.

Tahs skipper Jake Gordon argued the call and Marshall was not impressed with the laws.

“The players look bemused and I can understand why,” said Marshall. “It was just a regular cleanout, the actions of both players caused a head collision. I don’t think he had any intent Paddy Ryan, anything other than just cleaning out the ball at a ruck as he usually would.

“It should have been a penalty at most. But that’s the law at the moment unfortunately and to a certain degree it’s spoiling games because the referees are backed into the corner.”

Now it was the Highlanders’ chance to take advantage and they pounced, a slick backline move allowing Gregory to cross out wide.

Tahs assistant coach Pauli Taumoepeau, speaking on the match coverage with an hour gone, said that the Tahs had started to be shaded in the collisions.

“We came into this game knowing the collision battle would be really important for us, ” he said.

“They started like a house on fire, they were winning that. Then in that 20 minutes from half time to now they won that again and we saw that on the scoreboard.”

But from there, it was all the Tahs until a late Highlanders consolation try after the siren.

Edmed slotted a penalty on 66 minutes to extend the lead to seven points and Jeremy Williams went agonisingly close to crossing a minute later, when he dropped the ball with the line at his mercy as Banks arrived foot first to put him off.

Another penalty from Edmed made the margin 10 points with 12 minutes to play but after Charlie Gamble forced another seven minutes from time Edmed missed a relatively easy attempt to ice the game.

With four to play, though, he made amends, returning Wallabies forward Ned Hanigan busting a tackle and offloading to Edmed for his first try in Super Rugby.

Hanigan was just one example of explosive power from the bench that swung the contest decisively the Tahs way. Jamie Roberts, Gamble, and Angus Bell were also impressive.

“They all added massively for the Waratahs,” said Marshall. “The players injected by the Highlanders haven’t been able to get themselves into the game like those guys have. The impact from the bench of the Waratahs has been simply outstanding and quite possibly the catalyst for them winning this game.”

Hooper said the Tahs were hungry this season after their winless debacle a year earlier.

“We’ve got a really good style of play. Our coaches are hard on us when we make mistakes they tell us about them and they want us to improve. It’s all done in a really good fashion with the idea of becoming a better team and becoming better players – they guys are playing for each other, we’re in a good spot.”