The Roar
22nd May, 2022
13
Join the conversation
Advertisement
Write for The Roar

Dragons star Jack Bird has finally put pen to paper on his new contract despite agreeing to terms on the new deal last month.

He accepted an offer reportedly worth around $1.1 million for the next two years with a “mutual option” between the club and player for the 2025 season.

Despite speculation that the Wests Tigers are still trying to get him to switch to Concord, the Dragons were confident Bird would finally ink the deal and they announced it had been loded on Monday night.

“St George Illawarra is where I first started my career and I’m proud to remain a Dragon,” Bird said.

“The club gave me the chance to come back and play first grade after all the injuries I faced earlier in my career.

“It has been an opportunity I’m grateful for and one that I have enjoyed over the past 18 months particularly with the support of my family and friends close by.”

An Illawarra junior, Bird won Dally M rookie of the year at Cronulla in 2015 where  was a key part of their premiership win the following season and also represented NSW in five Origins.

A lucrative switch to Brisbane in 2018 was ruined by two serious knee injuries limiting him to just 17 matches over a three-year span before he returned to St George Illawarra last year.

His form has been solid without being spectacular as he has switched between centre, the back row and five-eighth. 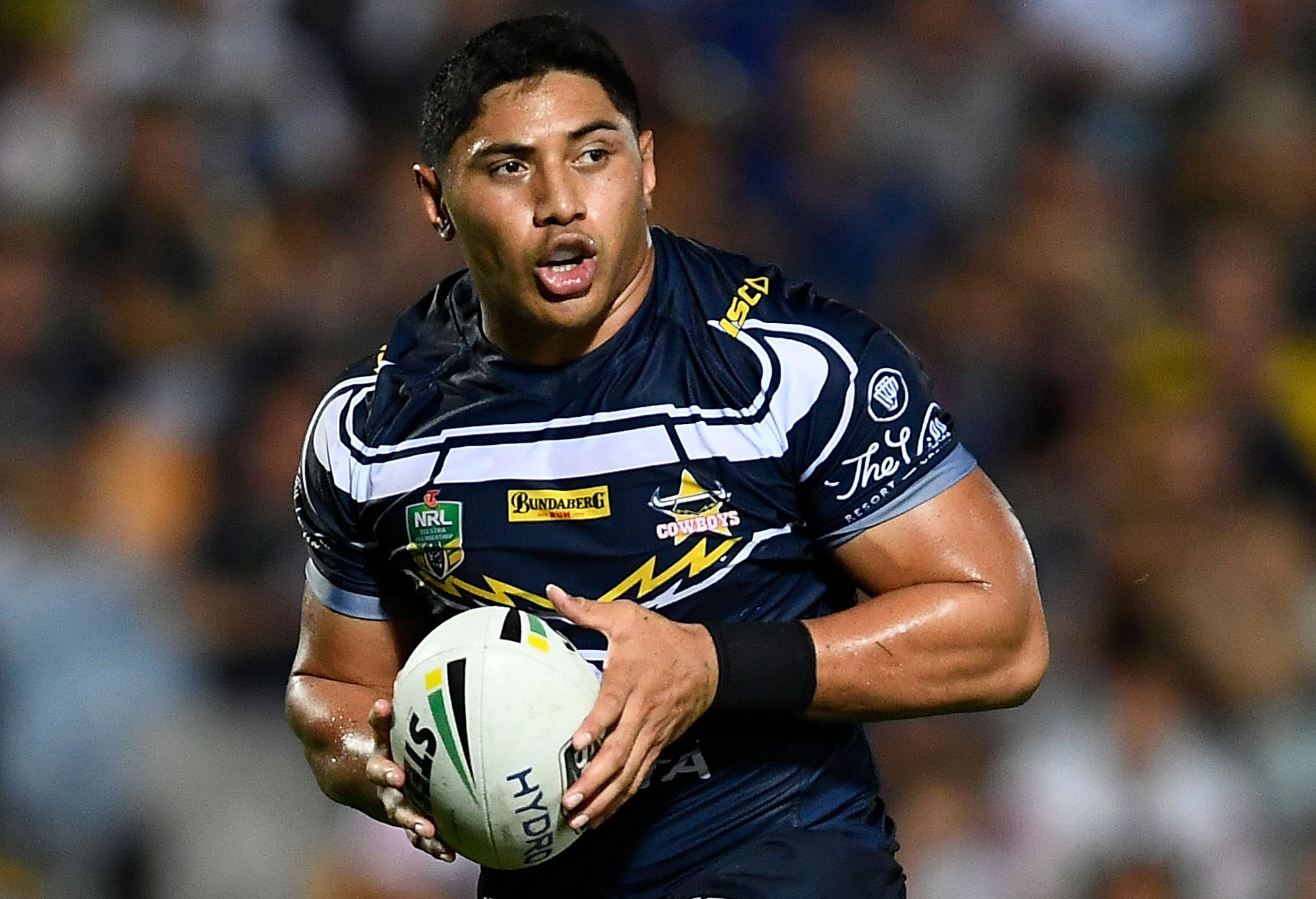 Cowboys duo out of action

North Queensland will be without injured stars Kyle Feldt and Jason Taumalolo for Friday’s blockbuster clash against NRL champions Penrith.

The pair were both first-half casualties of the Cowboys’ 36-6 thrashing of Melbourne on Saturday night.

North Queensland confirmed on Monday that Feldt had suffered a medial collateral ligament (MCL) tear which would sideline him for six weeks, ruling him out of contention for the Maroons Origin line-up with the three-game series getting underway in Sydney on June 8.

Taumalolo also sustained a lower grade MCL injury which will see him miss the Panthers match at BlueBet Stadium, and possibly the following round against Gold Coast.

The Cowboys can at least draw confidence from their stunning performance against Melbourne after losing the pair.

Winger Feldt headed to the sidelines in the 16th minute after he was buckled over awkwardly in a tackle and lock Taumalolo joined him 10 minutes later.

Meanwhile, Manly are yet to officially announce the prognosis on Tom Trbojevic’s timeline to return but he is facing three months out after dislocating his shoulder against Parramatta with reports on Monday suggesting he would be out until the end of October, all but ending his World Cup aspirations.

Knights centre Bradman Best is also facing a lengthy layoff after dislocating his elbow in his team’s loss to the Broncos last Thursday.

Brisbane skipper Adam Reynolds is good to go for Friday’s clash with the Titans after the club announced he had overcome a groin injury which sidelined him in Round 11.

Titans centre Phil Sami damaged his troublesome knee injury in Sunday’s loss to Cronulla and he is set to miss the clash with the Broncos.

Sharks centre Siosifa Talakai failed to finish the match when he limped off with an ankle concern but he is not expected to miss any more action.

Raiders fullback Charnze Nicoll-Klokstad twinged a hamstring in the win over Souths and is set to be replaced by Xavier Savage in the Round 12 showdown with Parramatta in Canberra. 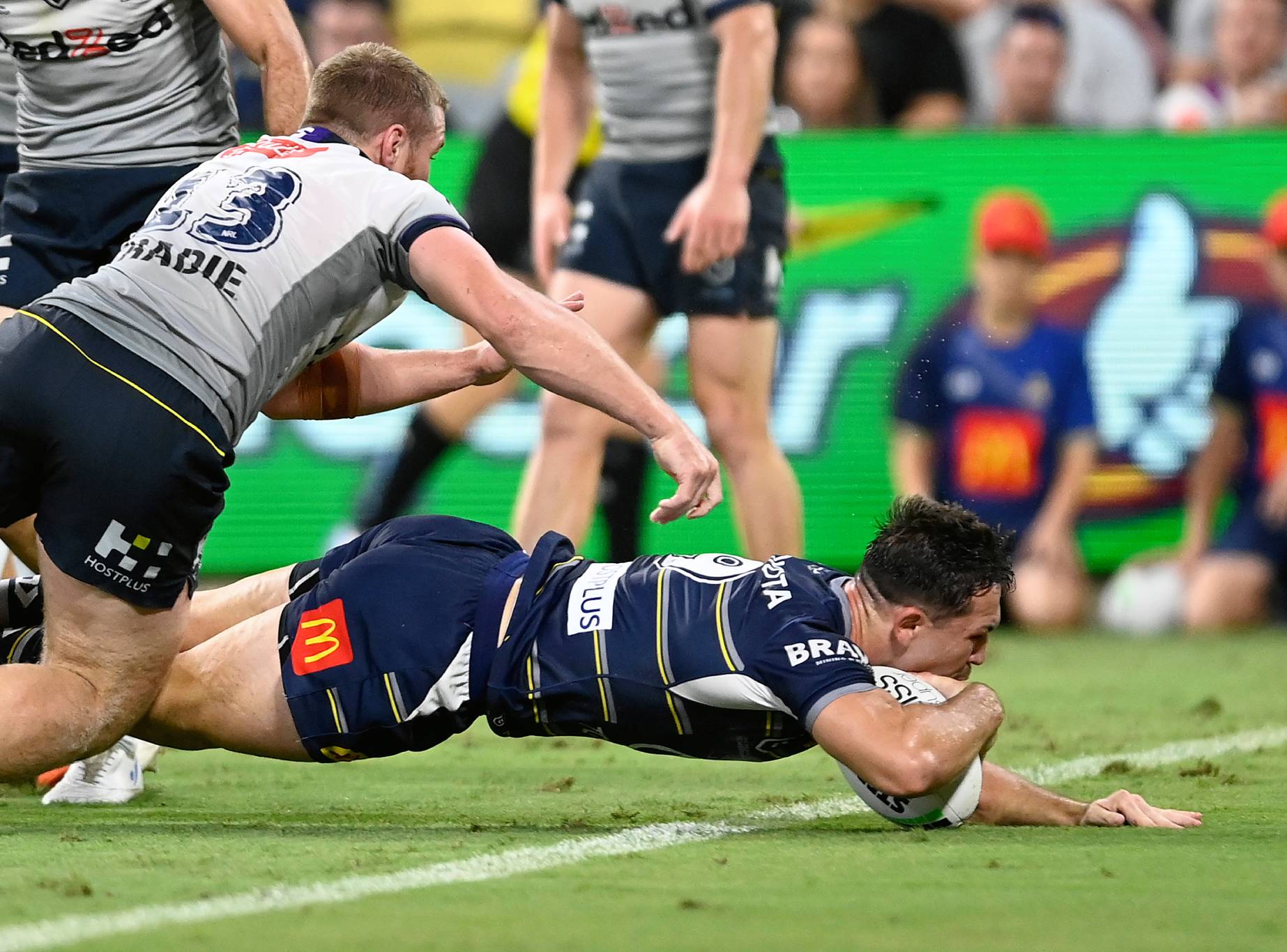 Reece Robson scores a try during the round 11 NRL match between the North Queensland Cowboys and the Melbourne Storm. (Photo by Ian Hitchcock/Getty Images)

Brandon Smith has described Melbourne’s recent form as “embarrassing” after North Queensland handed them their biggest loss during his time at the NRL club and their worst in nine years.

The Storm crashed to a 36-6 defeat in Townsville – their second straight drubbing after being steamrolled by 26 points against premiers Penrith.

They have to quickly regroup with a Thursday night AAMI Park clash against Manly, and Melbourne could still be without star halfback Jahrome Hughes, who has a troublesome calf injury.

He sits alongside fellow heavyweights Ryan Papenhuyzen, Reimis Smith, Nelson Asofa-Solomona, Christian Welch and George Jennings in the Melbourne casualty ward. Like many teams, Melbourne have also had flu run rampant through the club.

Despite being down on man power – which required playing Harry Grant out of position at halfback while Smith, usually an interchange forward, took his place as hooker – Smith said the Storm needed to be better.

“We’ve got a few people missing but that’s not an excuse for the two performances we put up. I think they’re quite embarrassing,” Smith said on Monday. “They’re not what we’re about at the Storm.

“We’re going to do some training on our defence and try to make Craig (Bellamy) a little bit happier than he was after the game. We’ve got to be better than what we dished up.”

Smith said Melbourne should have been able to take advantage of the Cowboys losing two key players with injuries in Jason Taumalolo and Kyle Feldt but instead felt the “wheels fell off” in the second half.

The slump follows Melbourne scoring 162 points in three games to break an 87-year-old competition record for the highest scoring tally through nine rounds.

Smith questioned whether the team had started taking wins for granted. “It’s definitely a wake-up call,” he told AAP. “That’s the worst loss I’ve ever copped in a purple jersey and we’ve done two in a row.

“I think we might have got a little too ahead of ourselves, thinking that all teams are going to roll over and you can put 40 on them. It’s better that it’s come this week than a week before finals.” 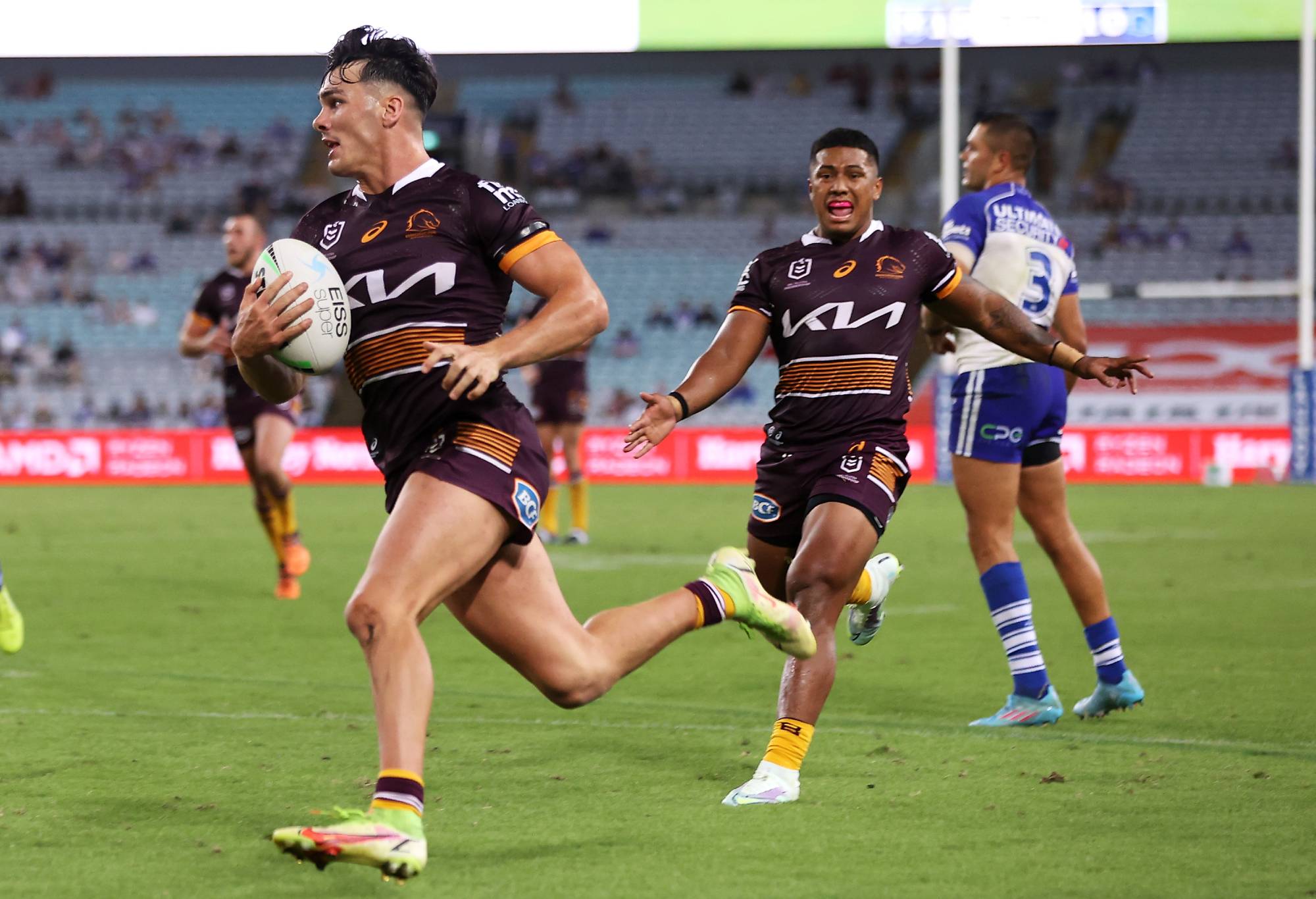 English centre Herbie Farnworth will remain a Bronco in 2023 after becoming the latest in a long line of NRL talent to knock back a lucrative offer from the Dolphins.

The Broncos announced on Monday that the rising star has extended his tenure at the club for next season after Wayne Bennett’s new team tried to pry him away.

“I’ve been here since I was 15 and I’m really happy with all the boys and Kevvie [Walters] and all the staff – I really enjoy it here at the club,” he said.

“The past two years have been tough but to get the last five wins in a row and the direction the club is headed, that’s played a big role in my decision to stay.

“With all the players who have chosen to stay, a lot of us came through the 20s competition together – Fleggy, Kobe, Patty, Payne, Staggs – we’ve all come through together and it’s good to stay together.”

Farnworth, 23, has played 51 matches for Brisbane since his 2019 debut and has crossed for seven tries in 10 appearances this year as the club has rocketed into fifth spot on the ladder with a 7-4 record.

The Dolphins are desperate to land a big name for their foundation season after a string of near-misses, including Harry Grant, Kalyn Ponga, Jahrome Hughes, Brandon Smith and Reed Mahoney.

Sharks halfback Nicho Hynes is just one point off the lead in the race for the Dally M Medal after his star turn in Sunday’s 25-18 win over the Titans on the Gold Coast.

Hynes was awarded three votes from judge Gary Belcher to move into second spot on the leaderboard behind Panthers lock Isaah Yeo. Dragons skipper Ben Hunt polled two votes in their victory over the Warriors to also sit in equal second spot.

Injured Storm fullback Ryan Papenhuyzen and Eels half Mitch Moses are one vote further adrift to round out the top five. 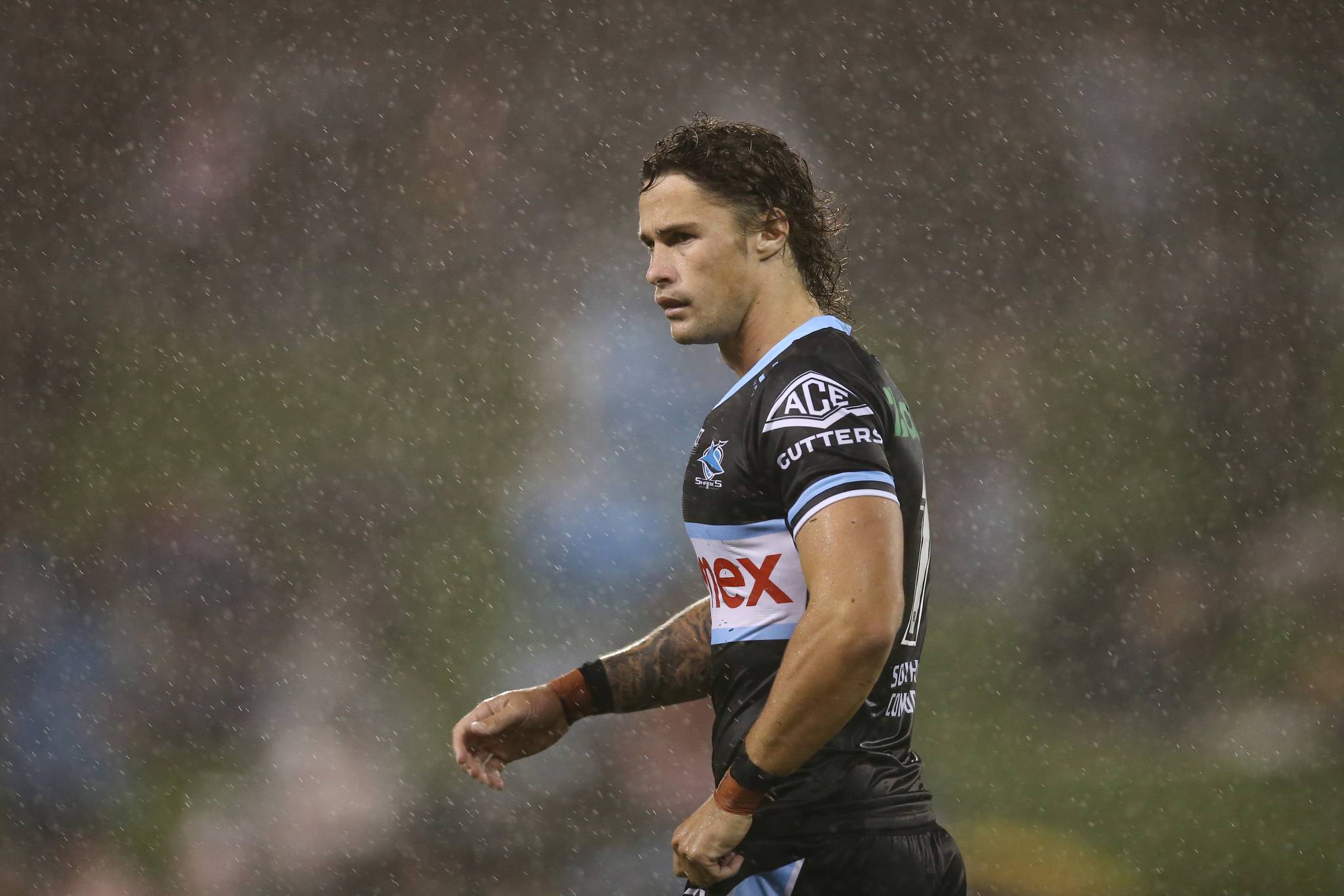 Dean Ieremia was awarded his second try, and while Kevin Walters wasn't complaining, there were many who believe it should have been called back. 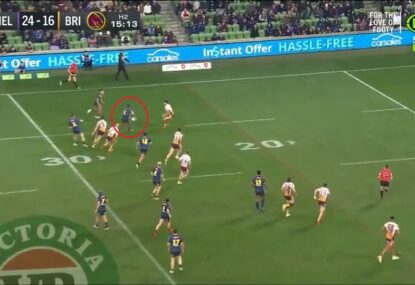 It was so slick the officials couldn't believe they finished it the way they did, sending it to the Bunker as 'No Try', only… 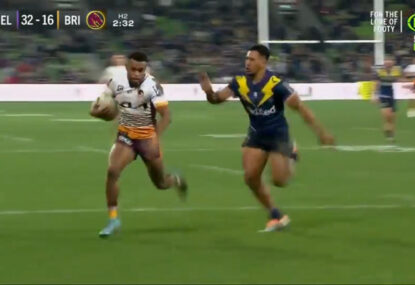 The Brisbane winger couldn't clean up a Melbourne kick near the try line, leading to an easy try to Cam Munster. 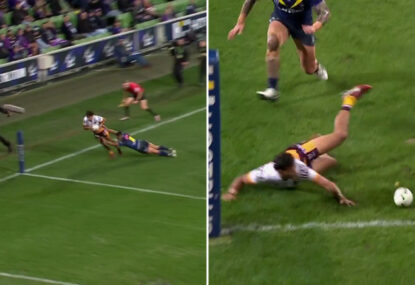 Justin Olam crashed over next to the posts, but the officials ruled the Storm five-eighth interfered with the defence after the kick. 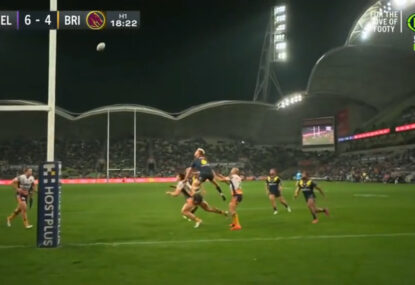 Not every day you gobsmack two NRL legends! 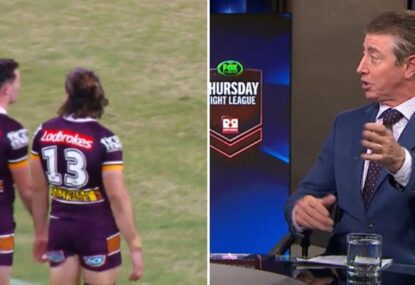