The big news of this week was the retirement of Essendon’s excitement machine Anthony McDonald-Tipungwuti, my Essendon-supporting granddaughter’s favourite player.

Still only 29 – he had his birthday last month – he was on course to become one of the Dons’ elite players and a regular attendee at any top 100 functions organised by the club.

His game tally of 126 was achieved over a six-year period, when he played 20 or more games in five of the six years.

That was not enough for him to make the top 100 game players at the Bombers, but his goal tally of 153 goals ranks him equal 39th on Essendon’s top 100 goal kickers with David Hille, a former ruckman/forward who served the club with distinction early in the current century.

A ranking inside the top 40 should mean that McDonald-Tipungwuti will remain a member of Essendon’s top 100 for many decades to come, and it is hoped he will be able to enjoy the company of his fellow elite at any functions the club may have.

The McDonald part of the name came from his adopted mother Jane McDonald.

His departure from the AFL scene came one week after Greater Western Sydney’s Leon Cameron resigned as coach of the Giants – a not too surprising outcome as he was out of contract at the end of the year.

In his eight completed years at GWS, he made the finals on five occasions, including one grand final.

Finishing with a slightly positive win-loss ratio in finals (7-6), he was never beaten in the finals by John Longmire (Sydney), Adam Simpson (West Coast) or Chris Fagan (Brisbane).

His total of 193 games as coach made him the 44th most senior AFL/VFL coach of all time.

His departure meant that another new coach stepped up to the plate in Round 10. Mark McVeigh took over the reins as the eighth fill-in coach for the 2022 season – surely a record.

A good win against the West Coach Eagles meant that he became the sixth successful part-timer for the year with only Matthew Knights and Scott Burns failing to win their one-off assignment to date. 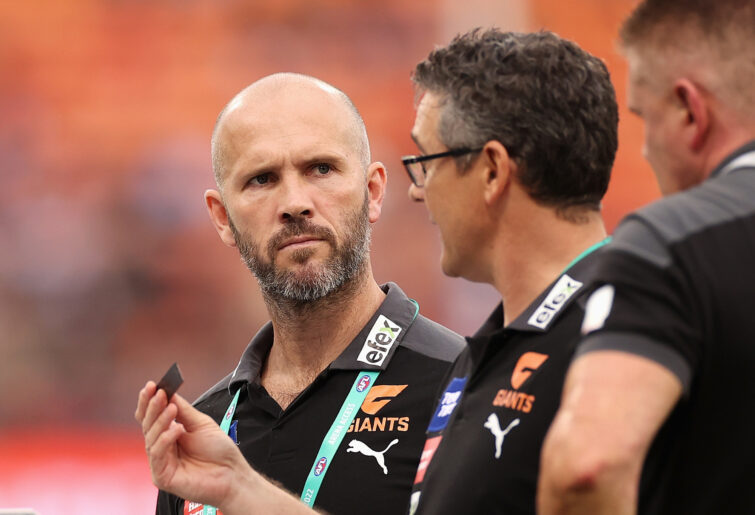 As well as keeping Greater Western Sydney’s slight finals hopes alive, this game provided a highlight by providing the two new goal kickers at the club.

That meant they now have had enough goal kickers to fill their list of a top 100.

On the field, the goal-kicking honours were shared by Carlton’s Charlie Curnow and St Kilda’s Max King, who both snagged six goals, while Richmond’s Tom Lynch failed to add to his total, allowing Curnow to take over as clubhouse leader.

King, on the other hand, moved past Silvio Foschini, Garry Sidebottom and Roy Bence – an early Saints champion from the 1920s and 1930s.

Meanwhile, Hawthorn and Collingwood provided the obligatory upset by beating Brisbane and Fremantle respectively and adding some spice to the ladder.