All the focus on completing sets has contributed to some of these potential superstars being stifled.

When you watch Viliame Kikau against the Melbourne Storm a few weeks ago, you see the value of such a player.

Most pundits had him underachieving last year and yet the Panthers still won the competition. Now he is in arguably career-best form and they are virtually unstoppable.

When he busts through on the edge of the ruck and then manages a perfectly synchronised offload to Jarome Luai for a sensational try, that is as good as rugby league gets.

People pay money to go and see this kind of action rather than endless hit-up after hit-up and set completion after set completion.

We can go back in history to see the value of barnstorming back-rowers.

Bradley Clyde won two Clive Churchill medals for best on ground for the Canberra Raiders in grand finals, including a premiership.

Ironically Sonny Bill Williams was denied this medal despite herculean second-half efforts in the Roosters’ 2013 grand final triumph over Manly.

I say ironically because Bob McCarthy was one of the judges. He himself was a sensational running back-rower.

McCarthy and the other three judges were of the widely shared opinion that SBW had a quiet first half.

Some coaches should encourage any back-rower they have who could play this role to flip the occasional offload.

The player would need the freedom to be able to cause a dropped ball from time to time.

Imagine a fantasy scenario where the NRL allowed numbers 11 and 12 two failed offloads a game where the drop ball was overruled.

Innovative thinking, eh! It brings back the crowds and the money.

When the barnstorming back-rower makes a successful break, the player receiving the offload will also often have the opportunity to place the ball under the posts, seeing the defensive line has been fully broken.

Fullbacks these days are often up in the line so this may be the best time for an offload. It goes without saying the valuable guarantee of a certain extra two points from the conversion.

A lot of focus these days goes understandably on the spine. Numbers one, seven and nine are pivotal to all teams.

Barnstorming back-rowers cannot be a thing of the past if rugby league is to continue to flourish.

These unique individuals have the extraordinary ability to hold down a tough-guy role in the ruck and then be an attacking weapon also.

They are similar to a cricket all-rounder. How hard is it to find a genuine one of these? Conversely, how absolutely golden is it when you have one?

Currently Luciana Leilua at the Wests Tigers potentially fits the bill and could evolve into another Jason Taumalolo.

Of course David Fifita at the Gold Coast Titans qualifies for the title of barnstorming back-rower and hopefully gets the chance to realise all his promise going forward.

You can also take a centre like Gene Miles and convert him into an edge-running wrecking ball towards the end of his career when his speed drops off a touch.

In his current form, Viliame Kikau could ask any price from any potential new club and is as valuable as any spine player. 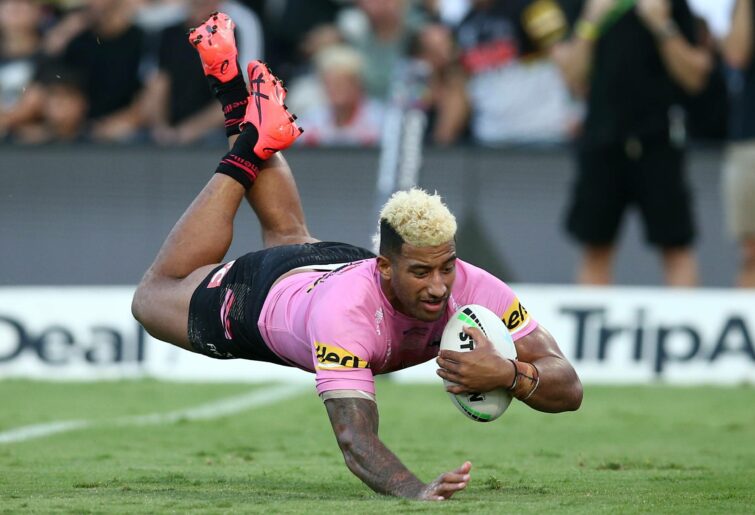 Kids all over the Penrith valley and beyond are asking their mums for bleached-blond mowhawks when they visit the barbers. He is an excitement machine.

Of course, the Bulldogs next year will have the chance to shape their team around him. Penrith will sorely miss him.

Encouraging these types of players brings back another blast from the past: the support player.

How valuable was Terry Lamb to the success of the Bulldogs in the 1980s and ’90s. Johnny Gibbs was another player at Manly who flourished alongside his back-rowers.

Fortune favours the brave. It is the coach that chances his arm and allows a barnstorming back-rower to experiment who will get the bickies.

Especially when you have a team struggling or in a development stage, this is the time for imagination.

I get it that the NRL is a business now and it’s about results but you don’t pay your entrance fee to see someone make 40 tackles, as crucial as these sorts of players are to have in your team.

Bring on the barnstorming back-rowers, please!