Wallabies captain Michael Hooper got his wish with Highlanders No.10 Sam Gilbert has suspended for five weeks for his dangerous tackle on the Waratahs flanker last weekend.

Gilbert pleaded guilty to contravening Law 9.18: “A player must not lift an opponent off the ground and drop or drive that player so that their head and/or upper body make contact with the ground.”

He had his suspension downgraded from 10 weeks to five because of what the SANZAAR judiciary deemed were “mitigating factors including the Player’s clean judicial record and his acceptance of foul play.”

He was red carded for the tip tackle on Hooper in the 28th minute of the Waratahs’ win and the Australian was upset afterwards.

“I don’t wish that on anyone,” said a clearly annoyed Hooper. “These things happen in the game. I was disappointed it happened to me and I wouldn’t want that on anyone. He should miss some weeks, I think.”

“How many times have these guys been told you can’t lift guys past the horizontal? He landed on his head, there was no other option, they had to give him a red.”

Wallabies lock Darcy Swain has reflected on his lowest moment as a professional player ahead of his 50th appearance for the Brumbies in their decisive Super Rugby Pacific clash with Moana Pasifika on Saturday.

Swain told reporters that being left out of the Brumbies squad for the 2020 Super Rugby AU grand final defeat of Queensland Reds was a “sad moment” and a defining one in his career. Cadeyrn Neville and Murray Douglas started for the Brumbies while Nick Frost was on the bench.

Asked if he ever doubted he would get to 50 games for the Brumbies, Swain reflected on being left out of that final. It’s clear it filled him with a similar sense of rejection that he felt when he left Queensland as a junior to try his luck in Canberra.

“That 2020 grand final I got dropped and I wasn’t in the best form, wasn’t playing good rugby,” Swain said.

“Dan [McKellar] had a hard conversation with me, said ‘have a good preseason’ and it comes back to all the lads pushing me. 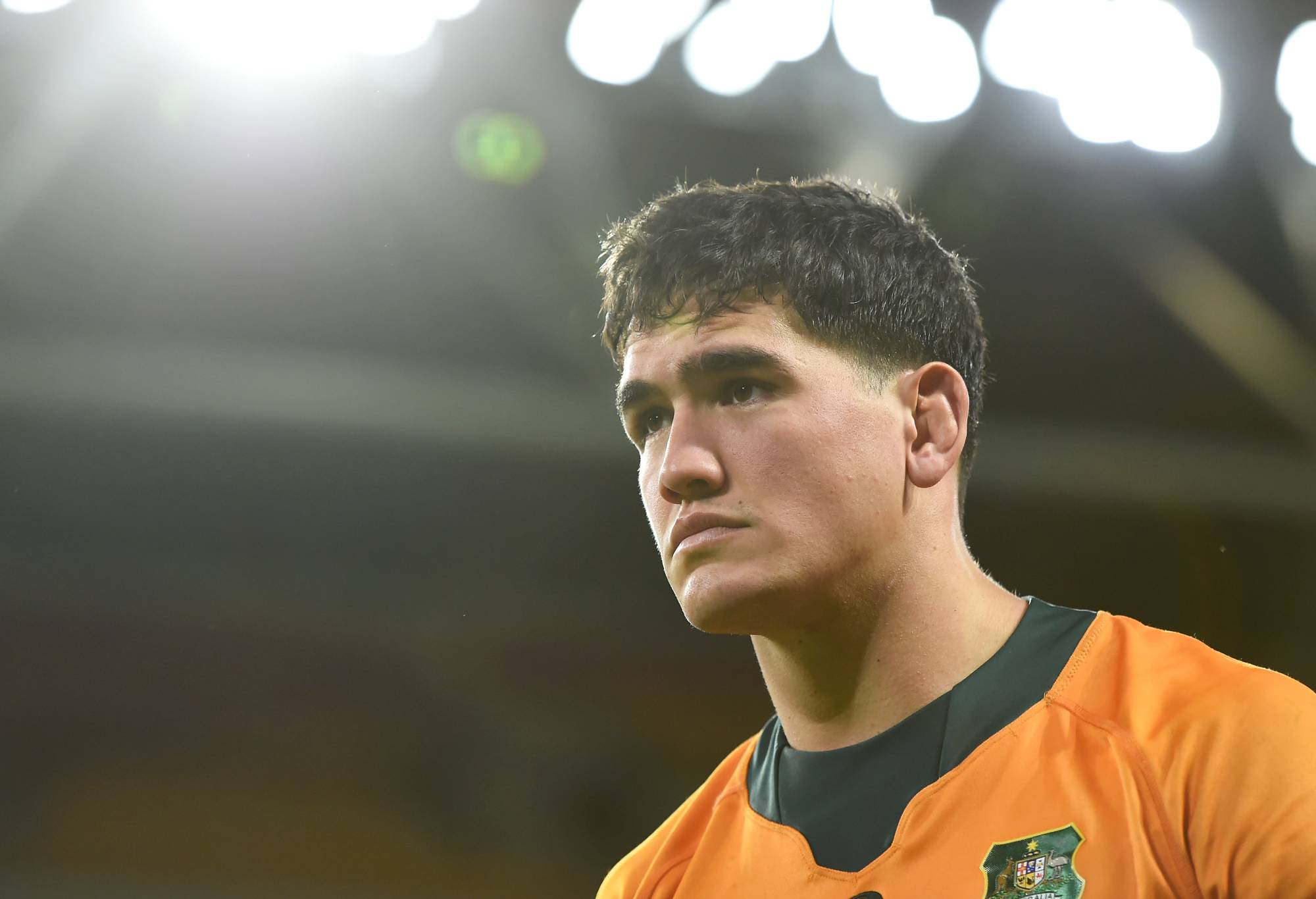 “We have a really competitive culture down here. It’s not as if we’re trying to one up each other, we’re all trying to make each other better. If it wasn’t for guys like fruit [Nick Frost], Tommy Hooper … I remember quite vividly having to chase them down because they’re fit buggers.

“That went a long way for me, having a good pre-season, playing good footy last season and having that mindset this year being pushed by those guys.

“That moment back in 2020 when I got dropped for the grand final was pretty sad for me. It was hard day to come to terms with. I love playing footy and all of sudden you’re not in the game you want to play.”

Swain said he heeded his coach’s words. He responded superbly last season and was called up for a Test debut against France, coming up with a massive turnover to win the first test, and playing 10 times all up for Dave Rennie.

“It’s made me who I am today and really shaped me and taught me a lot of lessons,” said Swain of his 2020 disappointment. “After I got dropped I didn’t really think too far ahead. It was just day by day and trying to pick off that next little block. Then it was nailing the pre-season, now it’s nailing this next game.”

He said the milestone 50 caps was “pretty humbling.”

“I didn’t think I’d get here but a lot of players, a lot of coaches and family and friends believed me in at the start so I’m very thankful.

“I didn’t get a look in up north and that put a bit of fire in my belly. That opportunity to come down here and snag a contract, learn and then get to play – I’ve been here seven years now.

“It’s just a little milestone but couldn’t do it without all the lads here pushing me to get better every day and the coaches for believing in me.”

The Brumbies head to Auckland in third but can overtake the Crusaders if the Reds can upset the Kiwis and the Brumbies score enough tries for a bonus point.

“Fingers crossed we come second but we’re just focusing on getting the win first,” Swain said. “We cant underestimate these guys. They’ve got a game (Tuesday) night so a short turn, around but we have to get us up right. we’re going to go out there and prepare.

“We’ve had a couple of disappointing losses but I think we’re in a good space and keep getting better.”

The Brumbies, meanwhile, announced a contract extension for tighthead prop Sefo Kautai until the end of 2024.

Kautai joined the club as injury cover in 2021 and the 25-year-old former Junior All-Black has gone from strength to strength in his second season at the Brumbies, making five starting appearances to date.

The back-rower and co-captain has barely been sighted this season thanks to shoulder and ankle injuries, the latter requiring surgery after a warm-up incident just minutes before kick-off.

That was almost two months ago, the Wallabies talent’s absence since swallowed up by injuries to a host of other teammates including high-profile trio Hunter Paisami, Taniela Tupou and James O’Connor.

Tupou won’t play again this season while O’Connor would only be a chance if the Reds progress to the Super Rugby Pacific semi-finals.

Promising outside back Josh Flook (shoulder) will also require more surgery after his great season painfully ended against Moana Pasifika on Friday.

Wright’s return would at least bolster a formidable back row that includes the match-turning Harry Wilson and Fraser McReight to face the Crusaders on Friday.

“There’s a long list of them (injuries), hopefully some back this week or in the finals,” co-captain Tate McDermott said. 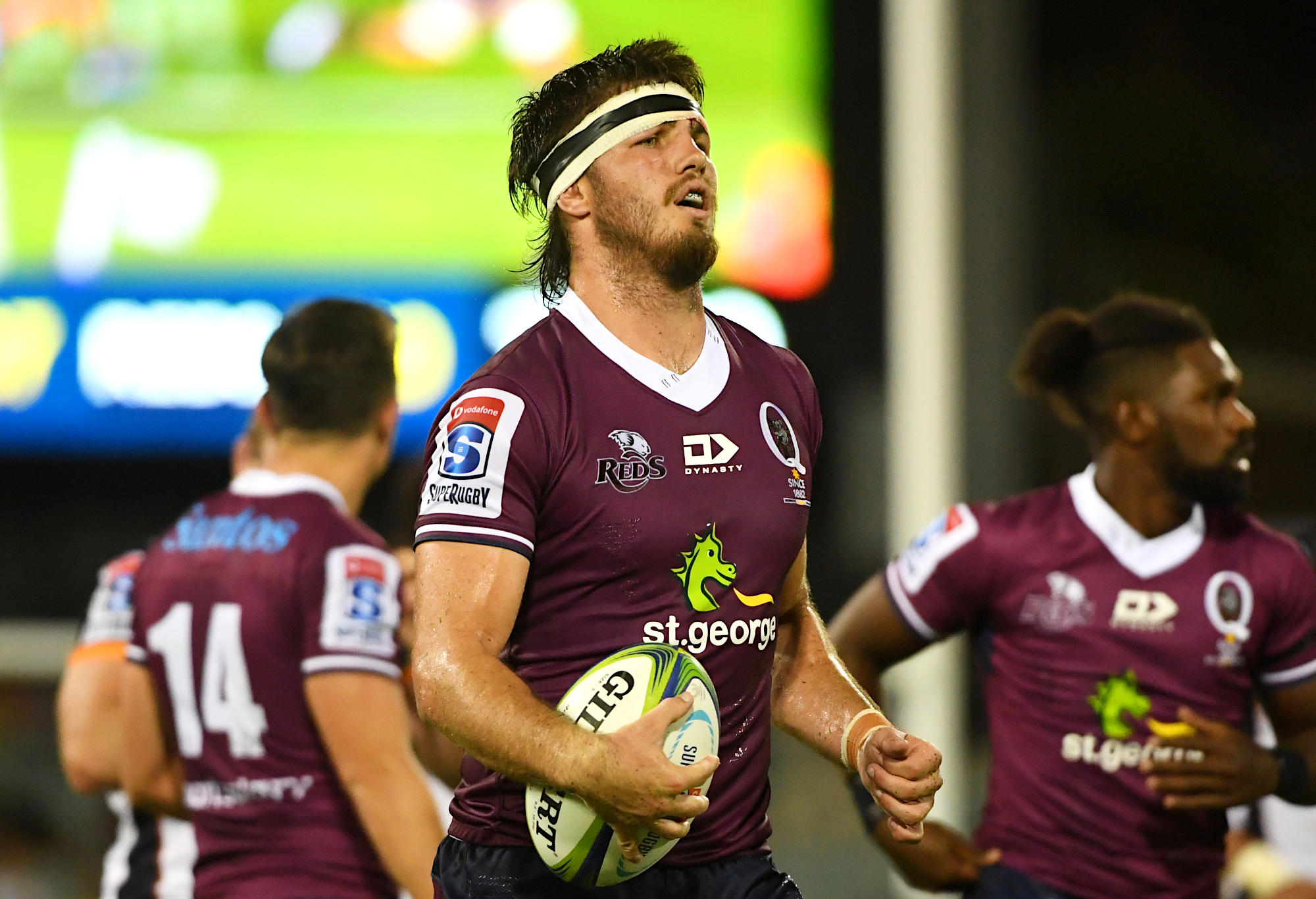 “But finally the co-captaincy comes into fruition … apart from the first game of the year, where I think he (Wright) got injured at halftime, we’ve never really been on the field together.

“It’s awesome for me, to have another voice out there particularly in our forward pack. That leadership that’s kind of been missing.”

The Reds regularly carried a double-figure injury list into games this season and, after a 7-1 start against Australian rivals, it’s caught up to them.

Now 8-5, the Reds are likely to finish the season in seventh and facing the prospect of back-to-back trips to Christchurch to face the second-placed Crusaders in a quarter-final.

McDermott hinted Lawson Creighton would get another crack in O’Connor’s No.10 jersey this week despite them going 0-3 with him in the saddle when the first-choice five-eighth was last injured.

But a 24-20 loss in Christchurch in 2020, when the now Japan-based Isaac Lucas deputised for injured O’Connor gives the Reds hope.

“We took a lot of belief from that game; looking back on it, it was a crucial game (for the Reds’ rebuild),” McDermott said of their loss despite scoring four tries to three.

“We’ve got to take the confidence from our first win in a while (against Pasifika) and turn it into belief.

“Yes, we can focus on all the threats the Crusaders have and (you do) respect them as one of the best club sides in the world.

“But the best we can do is show up and play the game to the best of our potential and that’s not one-out or being conservative.

“It’s about using a mobile pack, getting those big wingers early ball in space with time to make decisions.”

Ned Hanigan says he was “packing bricks,” when it came time to run on against the Highlanders last weekend.

Hanigan came on in the second half as the Tahs powered to an impressive win, with the bench resources playing a major role.

“I thought I was all good, and had a good week but when I was on the sidelines and Pauli (Taumoepeau, Waratahs forwards coach) told me to warm up, I just went from feeling all good to it being like my debut,” Hanigan told reporters on Tuesday.

“I really enjoyed it, it was a great week and we got the result which is always nice. Sometimes you can come back in and that doesn’t work and you don’t get the result so it’s really good to get that ‘W’.”

Hanigan watched on from Japan last season as the Tahs racked up the Ls and there wasn’t a W in sight.

“It’s like being a Waratahs fan. You watch from afar and see the team do not as well as you might think or club do so that’s I think just sad,” he said.

“You know there’s plenty of good blokes there putting their best foot forward but it just wasn’t going their way and they were on the other side of the ledger a lot. This year, they’ve bound together as a tight-knit group and things have been going their way.

“The feelings are the same as everyone else, you watching it as a bit of fun and watching the Rugby. I love the sky blue, love the ‘Tahs…definitely in the last couple of weeks, I got super excited to come back into the group and try and contribute and be a part of something.”

The Waratahs are sweating on the fitness of three key players as they prepare to host the Blues at Leichhardt Oval on Saturday.

While Izzy Perese is still out, Michael Hooper is fit to play, and Darren Coleman says he will pick his strongest possible team despite having a quarterfinal place locked down.

“Mainly for confidence, just to continue the winning ways we’re starting to develop and to give our fans something to cheer about at home,” Coleman told the Sydney Morning Herald. “We’ll pick our strongest team possible to win this week. Winning becomes a habit, it becomes something you get good at. You don’t want to drop a game a week before a playoff game.”