Over the past three or four decades, rugby union has been blessed with some wonderful talents at number 15: Matt Burke, Marty Roebuck, Gavin Hastings, Christian Cullen and Roger Gould.

The key attribute for the players mentioned above was their ability to be both safe and flamboyant.

There have been many others who have been world-class fullbacks and who have dominated provincial or club rugby and have had brilliant moments of international rugby, but don’t have a legacy or are not a lock in the roll.

Think Mark Latham or Tom Banks. Both were/are exceptional talents for Super Rugby, but didn’t necessarily convert that talent into dominance on the world stage with the exception of minnows.

Latham was a brilliant fullback for the Wallabies when Burke retired, but he didn’t dominate in all aspects of fullback the same as Matthew Burke.

I’m looking at the current fullbacks and Banks has had his chance.

At the same time, I’m seeing this bloke called Jock Campbell for the Reds. He has been switched between fullback, wing and the bench, but always delivers. 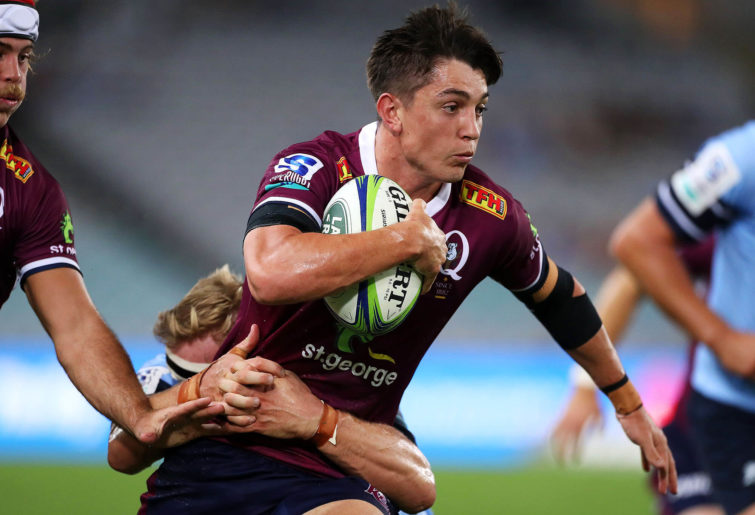 He is great under the high ball, he is safe on the edge and has a reasonable boot.

Instead, the Wallabies are looking to convert Jordan Petaia to fullback so they can fit him in.

In terms of most solid fullback performances across all five provinces, Campbell wins hands down.

He has scored plenty, saved tries and taken high balls when others couldn’t under pressure.

Put him in the cauldron against England. Let’s go back to Burke, who dropped a ball over the sideline in his first Test, but went on to be one of the greats.

I’m thinking ten Tests for Campbell would be enough. Fullback is not held down by anyone in the Wallabies’ set-up and they need a safe set of hands.

He is someone who can catch the high ball under pressure and go into contact with the opposition nailing him and still get the ball back.

He needs to not be afraid of contact or a quick kick to touch, let alone running the ball when space is provided.

Banks is a brilliant fullback and player. He’d be awesome at international level, but it has not come to pass.

In fact, against superior opposition he struggles under the high ball and doesn’t make enough impact in attack.

Let’s give a well balanced full back a go.

I love Quade Cooper as well, but he was to flamboyant for years. Last year, he showed a maturity. Let’s hope he can do it again. At fullback, that maturity has to be mid 20s. That’s Jock Campbell.

Let’s give him the first Test against England. Sure, it might tell the series if it fails, but think what it could do if it went the other way.

Campbell is the only fully rounded fullback in Australia. Pick him and back him.

If he fails in the first, give him the second. The bench will have plenty of options.