That pop you heard over the last two rounds of football was the Fremantle bubble bursting. Perhaps it had become waterlogged given the Dockers have played their last two matches in trying conditions.

But, as the famous saying goes, when the going gets tough the tough get going. The Fremantle players stood still instead.

A 7-1 start has become 7-3, which is about to become 7-4 and probably 7-5 with Melbourne and Brisbane next up. They have played most of their gimme games this season and are no good things to make the eight.

What’s interesting is that the Dockers have lost both of their wet games in similar yet different ways.

In putrid losses to Gold Coast and Collingwood, neither of which will be remotely playing finals this year, they dominated the uncontested possession count. Too much outside football isn’t often a winning strategy when the rain has fallen and it’s slippery underfoot.

Against the Suns, Fremantle at least got the football forward, and often. They generated 65 inside 50s but could not penetrate the Gold Coast flood defence through lazy ball use, poor skill and lack of imagination or patience. To kick two goals in three and a half quarters before a couple of charities late was a poor reflection on coach and players.

As is often the way in these situations – remember Sydney won the flag in 2012 playing slingshot footy – the Suns were able to springboard enough times, and Mabior Chol and Levi Casboult enjoyed an open forward-line to kick a winning score.

The tall Docker defenders, Alex Pearce, Brennan Cox and Griffin Logue, were out-pointed by journeymen footballers. It leaves question marks on their one-on-one capabilities when finals football comes around. 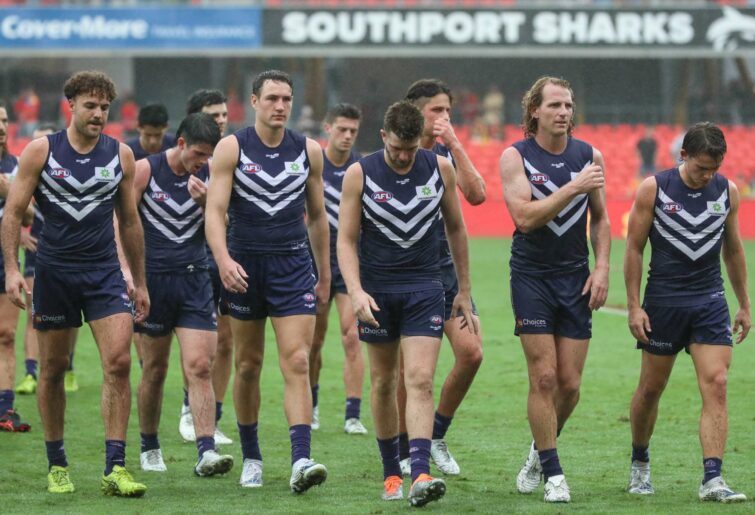 Against Collingwood, Freo once again dominated uncontested possession (+43 after being +56 against Gold Coast), but this time did nothing with it. Perhaps overcorrecting after finding no gain in pumping the ball forward the week before, this time they could generate only 46 inside 50s from almost 400 possessions.

This time the result was three goals in three quarters with a few consolations in the last.

It was again marking forwards that proved the difference despite the inclement conditions. Ollie Henry, Will Hoskin-Elliott and Brody Mihocek combined for 75 per cent of the Pies score, leaving Pearce, Cox and Logue bereft once more.

Meanwhile, the Dockers took two marks inside 50 for the match. Two. From 400 disposals and 46 inside 50s. The week before, they took three. That’s five marks inside their forward 50 from 240 minutes of football and 111 entries.

That’s got to be a combination of system and talent, regardless of conditions.

Should we just blame these results on the rain and write them off? Or do they speak to bigger issues that are only now being exposed? Perhaps it’s a lack of smarts or adaptability. Maybe they just need the game on their terms and have no resistance when it isn’t. Is it coaching? Is it execution?

It’s starting to look like Fremantle’s hot start to the year was just a case of getting the right teams at the right time. An unimpressive win against Adelaide. Beating rabble like West Coast, GWS, Essendon, North Melbourne. Catching Carlton on an off day and a complacent Geelong down at the Cattery.

It could of course be that there is only one good team this year, with a handful of average ones and half a competition of poor sides. Perhaps it is Fremantle’s lot to oscillate between the two latter groups.

Ultimately this season is a building block for the Dockers, and that’s okay. But if you see the words ‘Fremantle’ and ‘contenders’ in the same sentence going forward, as was ludicrously happening a few weeks back, you have absolute permission to spit your cornflakes out all over the table.