Gibbo
Roar Pro
24th May, 2022
52
Join the conversation
Advertisement
Write for The Roar

There are three cricketers from three different eras whose lives were more than cricket and who lost a significant portion of their cricketing careers because they did something that they believed was right.

These are their stories.

One name on the famous poem on the Ashes urn is Studd. The Studd name was famous in English circles, and three brothers made the grade. Sir John Edward Kynaston, George (GB) and Charles (CT) Studd all became famous cricketers during their time. CT and his brother George toured Australia in the 1882-83 series, the first to become known as the Ashes. Studd played five Tests in total and is forever memorialised on the Ashes urn.

However, Studd retired shortly after the tour because he felt the call of God to do missionary work. Ministering in China, India and later in the Democratic Republic of the Congo, Studd passionately served his God. He died in Congo, having fulfilled his personal mission,

“Only one life ‘twill soon be past, only what’s done for Christ will last,” he wrote.

Hedley Verity was a left-arm orthodox bowler for England during the 1930s. Verity bowled at almost medium pace, delivering the ball faster than a usual spin bowler would deliver it. Rather than spin the ball a great deal, Verity took wickets through his accurate bowling and was a handful on wet pitches.

His first international tour was the infamous Bodyline series in 1931-32. Despite the fast bowlers finding success utilising the Bodyline tactic, Verity himself took 11 wickets and had the second-best bowling average behind quick Harold Larwood. He went on to have great success for England in subsequent tours.

However, Verity foresaw that Europe was heading to the brink of war, so in 1937 he began reading military literature and training with the Green Howards. When war broke out, Verity enlisted and was commissioned as a second lieutenant. Verity’s unit moved around a fair bit during the war and spent some time in India, where his health deteriorated.

Verity’s unit discovered that they would be part of the Allied invasion of Sicily. During one fierce battle Verity commanded his platoon near a German outpost during a night raid when he was hit by shrapnel in the chest. Left behind and captured by the Germans, he was sent to Italy for surgery. He subsequently died in Italy of his wounds and was buried with full military honours. Verity missed the last several years of his career for England but joined his country and died doing what he believed was right.

‘Courageous’ had to be the word that summed up Henry Olonga’s career. One of the quickest bowlers Zimbabwe ever produced, Olonga also formed the spearhead of the Zimbabwean attack for several years.

Olonga was born in Zambia but moved to Bulawayo, Zimbabwe, early on in his life. Attending a prep school, he starred for the school and for the Zimbabwe national school cricket team. In 1995, at the age of 18, Olonga was picked to play a Test for Zimbabwe. In so doing, Olonga became the first black cricketer to represent Zimbabwe. No balled for throwing in a Test, Olonga remodelled his action with the help of Dennis Lillee and got back into the national team shortly thereafter.

Olonga played ODIs for Zimbabwe as well, the shorter format encouraging him to bowl as fast as he could. He took three wickets against India in the final over of a match during the 1999 World Cup, which led Zimbabwe to their first-ever win against India. However, as for much of his career, Olonga was never far from controversy. 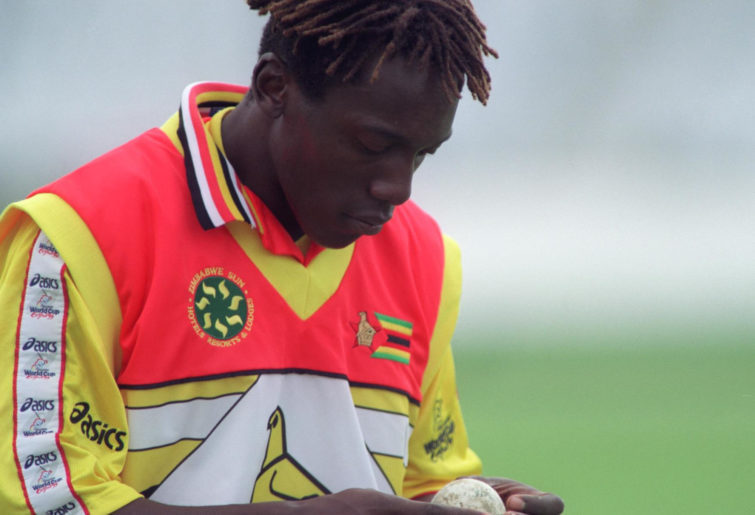 During the 2003 World Cup, Olonga and Andy Flower sported black armbands for the duration of the Cup. They released a statement condemning the abuse of human rights in Zimbabwe by then-dictator Robert Mugabe. While the rest of the world commended their stance, Zimbabwe rejected them both and treated Olonga harshly. He was kicked out of his cricket club and branded a “traitor”. There was even a warrant issued for Olonga’s arrest on charges of treason!