The Roar
26th May, 2022
20
Join the conversation
Advertisement
Write for The Roar

North Melbourne coach David Noble has fronted the media to respond to allegations about the club’s recent off-field turmoil.

Three members of the club’s recruiting staff sensationally walked out during the week, leading to speculation the Kangaroos, who sit 17th on the AFL ladder with a 1-9 record, could also look to move Noble on should results not improve.

But speaking on Thursday morning at Arden St, Noble says reports of a fractured relationship between himself and the players are ‘substantially untrue’ – including one that he had been instructed by club hierarchy to apologise to players after a much-publicised spray earlier in the year.

“They are all untrue.”

Despite North’s horror start to 2022, Noble says he and the club understand that the process of rebuilding the club necessitates the current ‘difficult times’, and maintains he is the right man to turn things around.

“Our members and our fans understand I took this job on understanding there will be difficult times,” he said.

“I’m here for the long haul. I want our club to be successful and strong… I want to win more games, nothing clearer, and we plan to win games every week. But it’s where we are.”

Noble also addressed speculation over the future of number one draft pick Jason Horne-Francis, who has put off contract talks with the club and courted controversy for an unapproved trip home to Adelaide for Mother’s Day.

The coach denied reports a hamstring injury that ruled Horne-Francis out of the Kangaroos’ Round 9 clash with Adelaide was a cover for a club-imposed suspension for the trip.

“It’s not an unusual situation for a first-round player to not sign his contract… that is not an unusual circumstance. I’m sorry, but I don’t see that as an issue,” Noble said.

“He didn’t get into trouble, he wasn’t suspended. We sat down with him and said: there’s protocols because what happens if he’s drug tested and we don’t know his whereabouts [is] the club actually gets fined.”

Also addressing the media, Kangaroos CEO Ben Amarfio admitted that the club were ‘surprised’ by the resignation of recruiting manager Mark Finnigan, recruiting officer Ben Birthisel and head of player personnel Glenn Luff, but says the door is always open should any wish to return.

“Would we have liked to have kept him [Luff]? Yes we would and I made that clear to Glenn when we chatted,” Amarfio said.

“The door is open if Glenn wants to have some time, have a bit of a spell and come back, the door’s open, the job is there.

“When you get an offer like that and you’ve done 17 years and done a great job, you’ve got to think of your family first.

“The same goes for Ben Birthisel. He’s been stood down, stood up, put on part-time. He’s studied in HR, gets a job in the HR field, he’s got permanency, he’s got security, he’s got a young family. It’s a no-brainer.”

The Roos’ poor recent form has seen the club come under heavy pressure throughout the season to date, with former champion Wayne Carey telling Triple M on Wednesday the club is ‘broken’.

“This is as low as this football club has been since I’ve known it,” Carey said.

“I don’t think they are being completely honest with themselves because you can’t improve until you actually acknowledge that we are broken.

“There is too much going on. You don’t have people just resigning for no reason.” 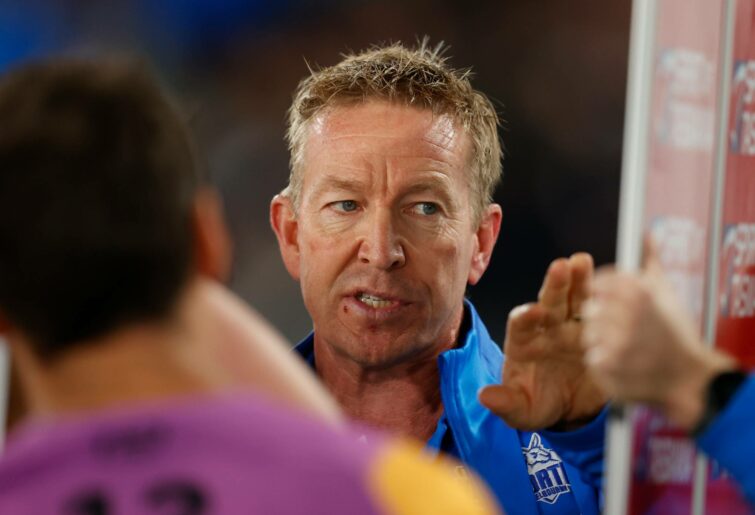 Former St Kilda coach Ross Lyon says Sam Fisher was a ‘very special player’ during his time at the helm, after the Saint was charged with drug trafficking.

The 39-year old will face court in August after choosing to stay in custody rather than face a Melbourne Magistrates Court hearing earlier this month, having been charged with regularly trafficking illicit drugs from Melbourne to Perth.

Lyon said that Fisher’s situation is proof that more work needs to be done to prepare players for life after football while still in the AFL system.

“I want to talk about the prehab. You want to send them away in rude health… from my own experience, when you get to the end of your career and you haven’t worked, you start to stress,” he said on Nine’s Footy Classified.

“I really drove when we had the meetings that you need to earn, work part-time or learn and be enrolled. I remember the noise around that, the AFLPA and media noise going, ‘What’s he banging on about?’ Well, that was 10 years ago.”

Lyon also said that it is difficult to reconcile the Fisher he remembers with the current allegations, saying he was ‘never informed’ of any underlying issues of drug dependency.

“He was a very special player for me. I coached him from 2007 to 2011. He was never in the leadership group, but he was an All-Australian. He was a star,” Lyon said.

“He always trained and he always played and he caused no headaches for me, but beneath the surface clearly there was a lot going on… we’ll get to the illicit drugs policy with the AFL later on, but as a coach you don’t get any of that, it’s the club doctor only. I was never informed.

“To me, what did I see? An incredible athlete, a lovely person [with a] kind nature that trained and played and was a star of the club.” 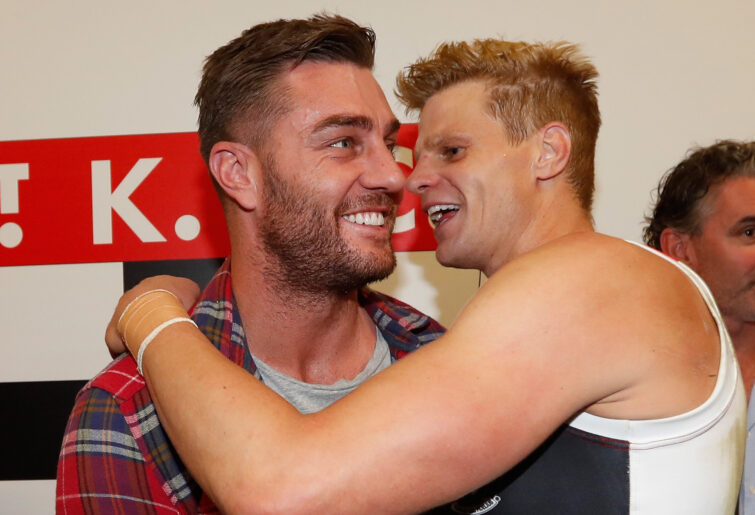 Danger on ice: Cats confirm Brownlow Medallist to miss until the bye

Geelong coach Chris Scott says the Cats won’t consider star veteran Patrick Dangerfield for selection for a number of weeks, with the 32-year old struggling with a number of injury issues.

Dangerfield suffered a calf injury and was subbed out of the Cats’ win over Port Adelaide last week, with the club opting to give the 2016 Brownlow Medallist time to fully recover rather than rushing him back.

“When I reflect over the last couple of years, we just haven’t had him firing towards the end of the season,” Scott said on Wednesday.

“Taking a bit of short-term pain to have him in the best shape possible at the end of the year, that may well cost us along the way.

“But in my opinion that is a better approach for us to take with him.

“Given there’s two games before the bye, we can use that extra week, which is probably more than he needs in reality.

“We think that is going to have him in the best shape to have a really good run at the last couple of months of the season.”

Dangerfield has thus far played through the pain throughout 2022, despite ailments including a corked calf; however, he has been well below his best.

Scott said the superstar’s availability will now be taken out of his own hands.

“That lack of explosiveness that we’re seeing is down to a series of really significant corks that probably should have kept him out for a couple of games – where he convinced us he can get through,” he said.

“So now we have put a line in the sand and said, we’re not going to accept that you can just get through, we want you to play when you can get back to your best.”

The Cats face Adelaide at GMHBA Stadium in Round 11, then have a crunch clash with the Western Bulldogs at home before their Round 13 bye.