Before last weekend, I had never seen an Aussie rules game. It must be mentioned, however, that I’m British, and I can confidently say that very few Brits have settled down for an AFL match.

So that’s exactly what I did on Sunday, watching Fremantle vs Collingwood, and here are an AFL idiot’s thoughts from that fixture and the sport in general.

The first two things I wrote down on my notepad were both questions: why is the pitch so big and, wait a minute, what did the guy on the sidelines just do?

The first can be answered with the response that the pitch has to accommodate all those players, but whose idea was it to have 18 per side? The second is in reference to the unique way in which the ball re-enters the field of play and led me to ask how difficult is the skill to do and how many people can throw the ball in that way? 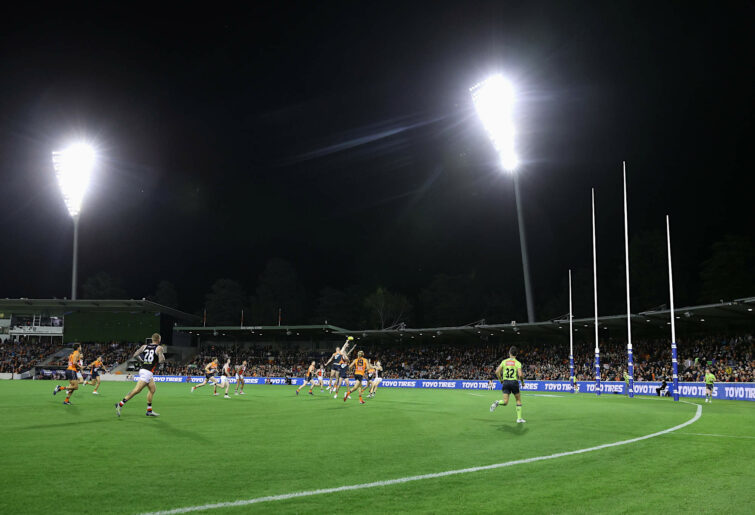 I will now digress to what I took from the game’s kicking. Surely territory is of no concern with a pitch that size and are there designated kickers, or can everyone kick well? Also, I wondered, for a game where kicking is so integral and where there are so many players, there were very few attempted charge-downs compared to a sport such as rugby union.

In addition, teams seemed calm having the ball so close to their own posts, and I found myself begging, “Kick it out!”

Passing also took up a lot of my attention during the game. Passing only seems necessary when you’re in danger of losing the ball, as several passes will get you nowhere on a cricket pitch. I saw the occasional ‘punch-pass’ and blamed the several handling errors on the pouring rain that day.

Something that occurs in nearly all team sports, positions, seems hard to navigate in Aussie rules. How does it work?

Another question I posed in my head was what abilities does the captain have? How much power does he wield and what makes a great AFL leader?

Scoring was my next topic, and Collingwood’s quick start gave me the opportunity to learn how it works. Six through the middle, one for the sides. Has anyone ever volleyed it on for six points and – I must ask – what is the history behind what the touch judge does when there’s a goal? It’s brilliant!

Leading on from scoring is one of my main takeaways from the game, the necessity to be clinical. In a wide and long pitch, quick counter-attacks can easily wreak havoc, as the Magpies proved in the second quarter. It seems you have to take your chances and pounce on your opponent’s mistakes more so than in other sports. Collingwood began to dictate the play, and at halftime I could not see Freemantle coming back.

So that’s a summary of what I thought of my first AFL game. I enjoyed the wacky and interesting sport, and could be watching some more games in the future.

I apologise for my lack of knowledge of the game’s vocabulary and other than that, thank you for reading an AFL idiot.