The Waratahs’ hopes of a top four finish have received a massive boost with the Auckland Blues picking a complete second string XV for Saturday’s match at Leichhardt Oval.

The Blues made 15 changes to their starting line up from the team that beat the Brumbies last weekend and coach Leon MacDonald said it wasn’t a sign of disrespect for the Tahs but a chance to give emerging players minutes in case they’re needed in the finals.

The Blues can not be dislodged from top spot and will host the Highlanders or Force at home next Saturday at 5.05pm AEST.

“We are in no way disrespecting our opposition. We have a very healthy respect for the Waratahs and believe we have named a team able to perform to our standards against them,” said MacDonald in a club statement.

“One of our major strengths this season has been the quality of our young players who have been fronting every week in training. We have had limited chances to see them under pressure in a game situation, and prepare for any potential injuries. We also lost our bye week and we have asked a lot of the guys in recent weeks and they have delivered in spades.”

A win by the Waratahs, who are close to full strength,  could carry them as high as fourth. For that to happen they will need a winning bonus point and the Chiefs and Hurricanes to both lose, the Chiefs by more than seven.

Waratahs flanker Charlie Gamble said it would be “massive for us to finish off on a high. If we can get a win in front of our home crowd at Leichhardt it will be good momentum ahead of whoever we play in the quarters.”

The Waratahs beat the Highlanders last weekend, finishing the job well after a week earlier dropping a lead to let the Hurricanes snatch a victory.

“We knew they were always going to bring the heat and we couldn’t finish it off. That was pretty disappointing and it will be good to put on an 80 minute performance for the fans to finish the year, and hopefully next year they all come back.”

Gamble agreed that wins over Crusaders and Highlanders had given the Tahs belief.

“Every Kiwi side we’ve come up against we’ve actually been quite competitive for most sections of the game,” he said.

“The Chiefs we got down down to 13 and that didn’t help us. Beating the Crusaders at home was massive, you saw the emotion the boys had in that one.

“Unfortunately we only played 60 minutes against the Canes and couldn’t close it out. To go to Dunedin I thought that was the best we’ve played all year.

“We’re quietly confident in our ability that when we have to beat a Kiwi team to win the title we can do that.

“We’re really tight. There’s belief through the whole camp we can go all the way.”

Gamble said he came into the season with the expectation and belief that the Tahs could have a strong season.

“After last year, it was tough not winning a game but I still thought the whole squad in general was really tight,” he said.

“We didn’t get down on each other and could have done that. We went really hard in the offseason, obviously DC coming in has made a massive change and everyone’s bought into it.

“We worked really hard, bought into the game plan and we’ve just chipped away through the season and turned a few heads. 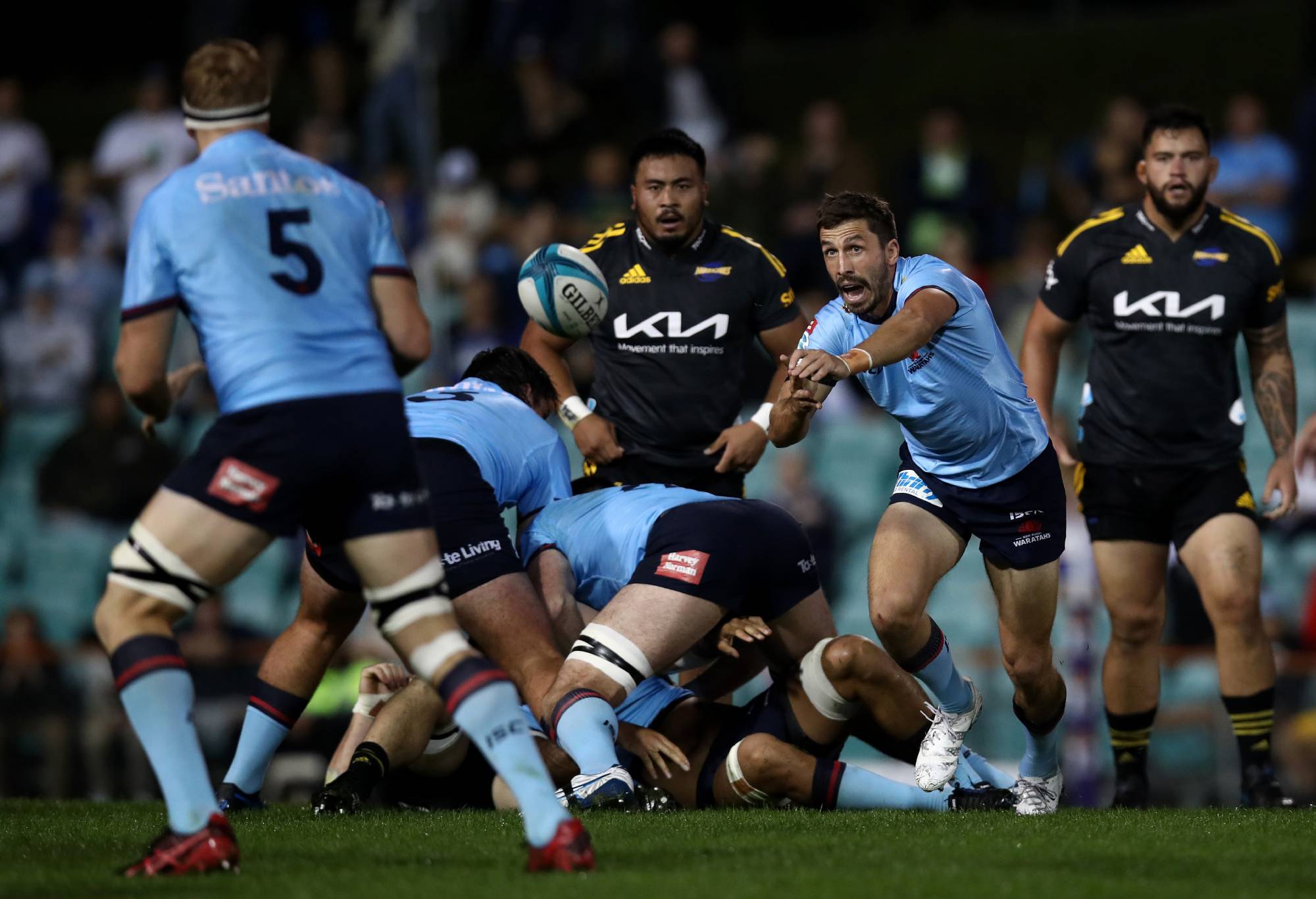 “I don’t know how many people thought we’d win eight games this year so we’ve proven a lot of people wrong and definitely got a few more wins under our belt.

“I always had belief in the ability of our team. There was a good vibe through the camp in preseason.

“The games against the Reds and Brumbies early we showed we could compete.”

Gamble is in career best form and puts that down to the faith shown in him by the coaching staff.

“For me it’s been the fact they’ve given me the opportunity and licence to play,” he said.

“Early on I didn’t know what it was going to be like. Hoops was out with his foot injury and having a break. when the coaching staff gave me the start in the first couple of games I backed my ability.

“It’s been pretty easy really. Everyone does their job on the field and I just do my job. I can’t say I’m doing anything special, it’s just what I do.”

How the Blues squads compare from last week to this.

Former Wallabies No.9 Will Genia told The Roar Rugby Podcast he was enjoying what the Waratahs are producing.

“I enjoy their style of rugby and you’ve seen their progression go from young blokes getting an opportuntity to growing as individuals, growing as a team, building a culture.

“You can see that culture’s really strong and obviously Darren Coleman’s done a good job to come in and continue to grow that.

“The way they’re playing their rugby they’re definitely a threat as a title contender.”

He said the Tahs have nailed a squad mentality.

“Understanding your place in the squad, everyone contributes whether you’re picked or not . You can see there is a culture of family there and everyone has bought in.

“Jake Gordon has been excellent all year. The captaincy has allowed his game to go to another level and Tane Edmed as really grown in that role as No.10 as well.

“I like the style of rugby they play and that’s hard for me to say,” joked the former Reds and Rebels star.

Queensland don’t know whether to pack for two days or 10 but are ready for anything at the pointy end of the Super Rugby Pacific season.

Sitting seventh on the ladder heading into the final round, the Reds fly to Christchurch to take on the second-placed Crusaders.

If the ladder positions don’t change they will remain in New Zealand to again take on the Crusaders in the quarterfinals.

It’s a big ask with the Reds needing to break an 11-year, eight-game drought against the Crusaders.

Only three points split the Reds, Waratahs (sixth) and Hurricanes (fifth) going into the last round, with the latter two playing Saturday night.

“Whatever’s in front of us the most important thing is being in finals footy – a new competition, what will be will be.”

“It’s a tough task with the Crusaders as they’ve been a champion team for so long.”

Queensland co-captain Liam Wright will make his return via the bench after injuring his ankle in in round seven, but that good news is tempered by the loss of playmaker James O’Connor with a hamstring tear.

Lawson Creighton is at 10 with Thorn feeling he will be better for his stint earlier this season during another O’Connor injury.

“Obviously losing James is disappointing but Lawson comes in this time having experienced starting against different sides and he’s excited.”

Jordan Petaia has been shifted infield to No.13 to cover for Josh Flook’s shoulder injury.

Meanwhile, the Waratahs have made five changes to their forward pack for a home clash with the ladder-leading Blues on Saturday night.

Ned Hanigan will start at lock after his impressive cameo off the bench in his first match back for the Waratahs since arriving from Japan.

The Waratahs are looking to back up their 32-20 victory over the Highlanders last round in Dunedin.

“Ned comes into the starting team as his performance last week off the bench was just too good to leave out,” said NSW coach Darren Coleman.

In other matches, the Brumbies look to fine-tune their game ahead of finals against Moana Pasifika at home on Saturday afternoon before the Western Force host the Hurricanes.

The Force need a win to clinch the last spot in the playoffs while the Rebels take on the eighth-placed Highlanders on Sunday.

While they’ve shared some bitter history, Melbourne Rebels will do what they can to help Western Force through to the Super Rugby Pacific finals by beating the Highlanders in their last-round clash on Sunday.

The Rebels could hold the Force’s fate in their hands, with the Perth team contending with the Highlanders for the eighth and final spot in the play-offs.

Melbourne and the Force formed a rivalry when the latter were axed from a reduced Super Rugby competition in 2017 while the struggling Rebels survived.

Rebels flanker Brad Wilkin, who announced he had re-signed with the club for a further two years, said his team wanted to finish their inconsistent season well.

And they were happy to help out their fellow Australians.

“We definitely want to finish on a high at home as it’s something we can take forward into next season,” the 26-year-old said.

“And if we can also help the Western Force get through to the finals, it’s only good for Australian rugby so we will be doing our best to get the win.”

Wilkin has been one of the Rebels best performers in a year that has only yielded three wins from 13 games to sit 10th.

He had two seasons with the Waratahs but his career stalled there behind Wallabies captain Michael Hooper while he also suffered back to back ACL injuries.

Debuting for the Rebels in 2019, he said there were options to move overseas but he was happy in Melbourne and playing big minutes consistently.

“The work that the Rebels have put into me that allowed me to stay on the park is undervalued so was a big factor in me staying in Melbourne,” Wilkin said.

A former under 20s national player, Wilkin is hoping his season doesn’t end this Sunday as he eyes possible selection in the Australia A team, who will play three matches in Fiji in July.

“I’m hopeful but not sure – we will have to wait and see,” he said.

“Any opportunity to play more footy and develop and grow and be around quality coaches is exciting.”