Thanks to all who contributed a question, or added to the debate at the call-out stage. First thing’s first – the Aussie team of the month for May!

There were many a query about the under-performance of the Force and the Rebels in the trans-Tasman portion of Super Rugby Pacific:

TC and Andrew steered the discussion towards the Queensland Reds:

It is still a burning question: why can’t Australian teams succeed more regularly against opponents from New Zealand. Why do some Aussie sides, like the Brumbies and Waratahs, fare better in Trans-Tasman competition than the Reds, Rebels and the Force?

I’ve already given some idea of why this is the case in the macro-statistical scale. New Zealand sides are still averaging 35 minutes plus ball-in-play time, compared to roughly 32 and-a-half by Australian teams. They are used to having the ball for longer periods in a game too – 18-19 minutes of possession as against 16 minutes.

The Brumbies and the Waratahs, who have achieved all five of the Australian victories against the original Kiwi franchises thus far in 2022, are more bulletproof against such stats. They do not go in for a huge amount of ruck-building and are happy playing off their set-piece and a strong defence.

Both sides score more than 60% of their tries from a lineout starter, whereas the top two in New Zealand create a far higher proportion of scores from the counter in open play – 43% for the Blues and 34% for the Crusaders, compared to 24% for the Brumbies and a meagre 15% for the Tahs. The Aussie sides which do best against New Zealand tend to offer a contrast of styles.

Now let’s take a look at the Queensland Reds. They score 41% of their tries on the counter, just like a good Kiwi side. Flip the coin to the other side, and you find one of the poorest lineouts in the competition, ranking above the Fijian Drua and Moana Pasifika at 79%, at the foot of the table. The Reds also do not have the same ability to sustain high tempo throughout 80 minutes, with a relatively low average of 32 minutes of ball-in-play time.

There is a sense that the Reds are falling in between the stools against New Zealand opposition, playing a similar style to the Kiwis but unable to keep pace with them over the duration.

The Force and Rebels on the other hand, are simply not defending well enough, conceding an average of 47 points per game versus opponents from Aotearoa. The stat again raises the question-mark of whether Australia would not be better off committing only their top three sides, rather than all five to Trans-Tasman competition. Would the Force and the Rebels be better suited to Mitre 10 rather than Super Rugby?

Frankly raised that possibility on the forum:

“I think replacing the NRC with a competition with the Super Rugby teams – replacing the Wallabies and Australia A representatives with emerging talent from club rugby would be more advantageous.”

Let’s take some examples of areas where the Waratahs are excelling, and the Rebels are failing when they come up against Kiwi opposition. Wednesday’s article illustrated what a supercharged bench can achieve in the final quarter of a game, and it helps to cancel or at least balance out the advantage New Zealanders enjoy in matches with a high ball-in-play time. That is a great strategy.

In order to minimize Kiwi opportunities to score on the counter, security at the ruck is a very good place to start. The Waratahs’ ball-placement under threat at the tackle area was outstanding against the Highlanders at the Forsyth Barr stadium:

That is newcomer Langi Gleeson making the immediate long placement after a short tackle bust. The ball is presented at full stretch, which means it is too far away to be pilfered, and only one man is needed to attend the ruck.

The Waratahs are not winning the collisions at those first three tackles but they are recycling ball quickly, and that is just as important. Eventually quick ruck delivery reaches a tipping point which will allow a clean break later in the sequence!

New South Wales also excelled at regaining shape in defence quickly after a they had conceded a turnover. In the following example, the Highlanders have just won a turnover, and in typical Kiwi fashion they shift the ball wide to engineer an immediate break on the opposite side of the field:

In the second clip, the Waratahs D has five players around the ball at the first ruck after the break: 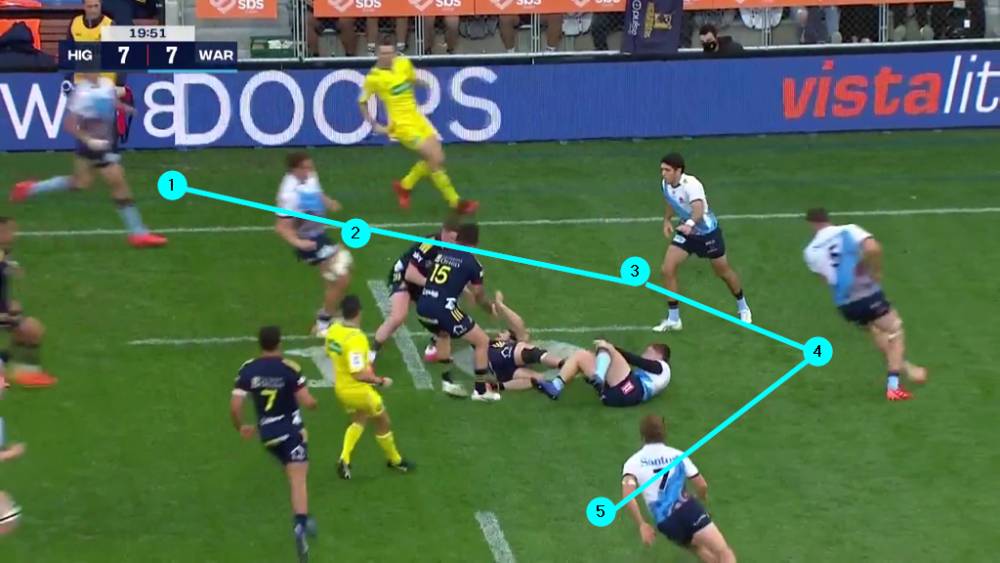 It is fully back in shape after only three phases, which means that (eventually) the attack is stymied, and shepherded over the side-line. That ability to regroup quickly neutralized turnover counters on at least three or four other occasions during the game.

The Rebels and Force by contrast, give up too many soft scores for comfort.

From a defensive viewpoint, there are far too few objections raised to stop the Hurricanes from doing what they want to do. Ball is won uncontested from the tail of the line, with four Rebels defenders still in the ‘box’ directly behind the set-piece: 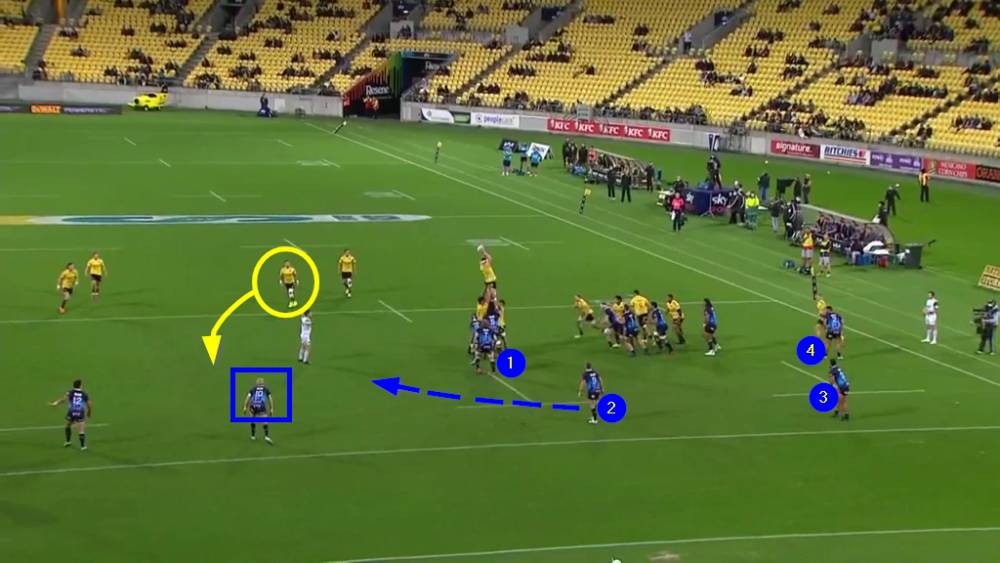 There is every reason for the Rebels number 9 (James Tuttle) to be positioned further out towards midfield, and more mindful of his opposite number T.J.Perenara.

As the play develops, T.J. is able to move much further out, as far as the space between the Rebels #10 Carter Gordon and #12 Matt Toomua: 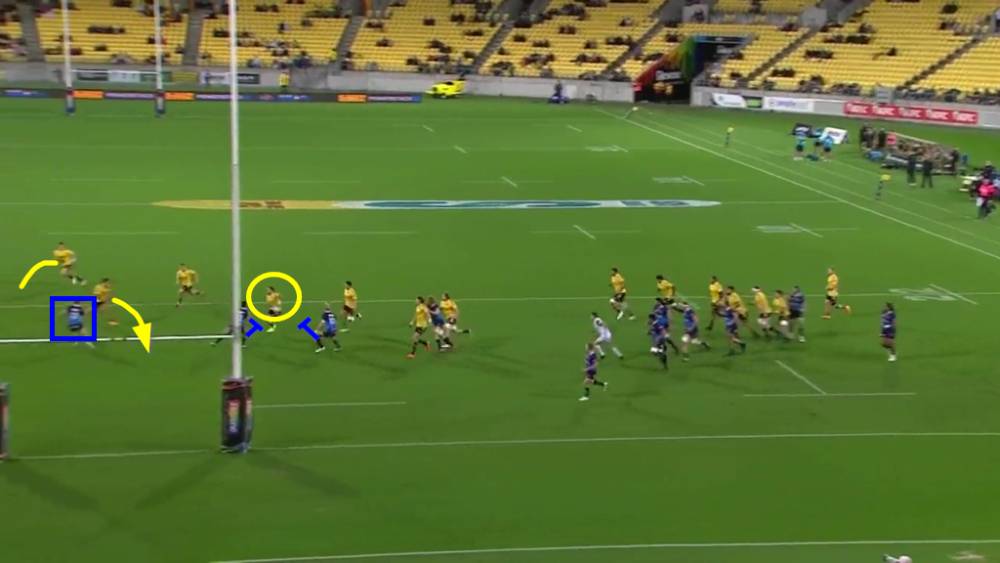 That gives the Rebels’ outside centre Andrew Kellaway an unenviable task, trying to pick which one of two runners (one inside, one outside) will get the ball, and he chooses the wrong option. Billy Proctor scores without a hand being laid on him. It is all far too easy.

Take a look at the size of the Hurricanes three-quarters against the Rebels, with four players of over 6’2 and around 100 kilos starting and another who made a significant impact (Peter Umaga-Jensen) on the bench. Joe Schmidt never picked second playmakers for Ireland, he selected the strongest midfield available.

Ireland under Schmidt also played about 70% of their rugby off the scrum-half, and Joe spun a sophisticated web of moves designed to drag the defence out before making a rapier thrust up the middle:

Will we be seeing something similar from the 2022 All Blacks? It would come as no big surprise to Joe Schmidt bird-watchers in Ireland!

DJ asked about an understanding of defence which is currently evolving to suit the new rules about ball held up over the goal-line:

World Rugby recently changed the refereeing outcome when an attacker is held up over the goal-line and cannot ground the ball. That used to be a 5-metre scrum to the attacking side, now it is a goal-line drop-out to the defence, and the change is having serious repercussions:

“Goal line dropout: The awarding of a goal-line drop-out to the defending team when an attacking player, who brings the ball into in-goal, is held up.

Rationale: To reward good defence and promote a faster rate of play.”

Defensive teams are learning quickly how to manipulate play towards the release-valve provided by a goal-line drop-out – either by deliberately allowing the attacker to enter the in-goal area and holding him up, or by targeting the ball with a punch of slap:

In the first example, the Reds’ Angus Blyth drags the Brumbies maul over the Queensland goal-line, knowing that he can position his body under the ball to prevent grounding; in the second, second row Hugh Tizard punches the ball out of Lucio Cinti’s grasp as he prepares to dot the ball down for a try in the English Premiership game between London Irish and Harlequins. In both instances, the attacking side is unable to sustain the pressure with another attacking 5m scrum.

There was a hive of interest around refereeing standards:

What is the key ingredient in the ‘cooking’ of a top referee? It is an extremely important question in an era where the official may have to compute 38 different possible offences at every one of a potential 200 breakdowns in a match.

Every mistake can be replayed ad nauseam, in minute detail on social media afterwards. The top referees are the ones who can see beyond the endless protocols and cut through the litter of by-laws, to trust their simple intuition of events.

Take a look at the following decision by Wayne Barnes in the recent English Premiership game between Harlequins and Leicester:

England prop Joe Marler dips slightly into an upright tackle by Tigers’ second row Calum Green, and shoulder-to-head contact results. A couple of months ago, this would have resulted in an automatic red card for the tackler, but in this instance, Barnes noticed that the man behind Marler, Alex Dombrandt, had pushed the Quins’ loose-head into the defender:

It was the first time I can recall the attacking side being penalized in such an event, but you can see the evident common sense behind Barnes’ reasoning. It widens the sense of responsibility for head-high contact and makes all players, attackers and defenders alike, more aware of their roles.

The debate was broadened even further in a recent article by journalist Michael Aylwin:

“Gum-shield technology, of the sort used by Harlequins and Gloucester, is already telling us that 30% of an elite match’s collisions are direct to the head, while more than half of the cumulative impact as experienced at the shaken brain, is from blows that do not involve the head at all. Quite how picking out the odd collision as worthy of red is meant to change any of that is a question for the “strategists” who came up with it, five and a half years ago.”

If almost one third of collisions on a rugby field involve head trauma, and concussions can really be caused without direct contact to the head, it is unearthing a set of problems far beyond the refereeing protocols as they are understood right now.

Many thanks once again, to all those who contributed a question, or developed the discussion in the forum!