New Zealand Warriors have produced another woeful performance to record their fourth defeat on the spin, giving Newcastle a 24-16 win in Redcliffe.

Kalyn Ponga was the catalyst for a Newcastle performance that was as good as it needed to be and little more, with the incumbent Queensland fullback overshadowing Reece Walsh, his main rival for the role.

The Warriors had stormed into a 12-0 lead on the back but once the Knights woke up, the Kiwis faded badly and in the end, Newcastle were good value for their win.

Neither side were particularly impressive in truth, but the Knights had the crucial quality when it mattered and the Warriors were, not for the first time, guilty of shooting themselves in the foot at critical moments.

Ponga laid on two tries in a timely return to form ahead of Origin selection, while Anthony Milford, in just his second game of the year, looked ominously creative with ball in hand.

Daniel Saifiti, who had been doubtful for Origin due to poor form this year, will certainly miss now due to a knee injury that saw him taken from the field after just 23 minutes.

Marcelo Montoya was sin-binned and will likely miss time for the second time this year after a swinging arm to the face of Dom Young.

Newcastle have had severe issues with the goalline defence this season – as anyone who saw their defeat at home to Parramatta will know – and it would bite them early.

Freddy Lussick had made the original break down the centre of the field to get the Warriors into position, and from close range, Adam Pompey wandered through a weak Jake Clifford tackle to score.

The Warriors’ strong start continued with one of the half’s rare moments of true quality, a flashy backline move that saw Walsh put Viliami Vailea in for his second try in as many weeks.

Walsh fluffed his lines on the conversion, slipping before he reached the ball, but would get the chance to add two more in the 19th minute.

The Kiwis might have had more points: the penalty goal might well have been a penalty try, as it came from a high shot on Shaun Johnson in the act of scoring.

The Warriors are so often their own worst enemy and would be for the rest of the half. They had already sent one kick off out on the full, and overhit the next to give the Knights good ball.

Though they successfully defended the first set, Chanel Harris-Tevita dropped the ball in yardage and the Knights were able to capitalise, Jake Clifford making amends for his earlier poor defence with a kick that Tyson Frizell touched down. It was a contentious grounding, but allowed to stand.

Newcastle then hit back with their own moment of class. They put together solid attacking shape and got Kalyn Ponga into space, allowing Edrick Lee to make it 12 all.

The exchange of scores to open the second half could not have been more emblematic for the Warriors. They created some points for themselves, thanks to the boot of Shaun Johnson and that famed Knights goalline defence, resulting in Dallin Watene-Zelezniak in acres of space to touch down.

Then they dropped the kick off and allowed Tuala to walk in untouched from the resulting scrum play. It must be infuriating to be Nathan Brown at times.

Bad went to worse, with Marcela Montoya binned for a clear swinging arm to the face of Dom Young and earned himself a sit down for ten minutes, and likely longer once the judiciary sees it.

The Knights were unable to make the most of their advantage, but did get their noses in front when Anthony Milford dribbled a kick through that Tuala reached first for his second of the night.

Newcastle needed to keep things tight for the final ten minutes, and the Kiwis had to throw everything at them. Perhaps aptly, with the game on the line, Shaun Johnson aimed a kick at the corner and punted the ball clean into the stand.

Nearly three years - 1,038 days to be exact - since their last home game in front of their fans in Auckland, the New… 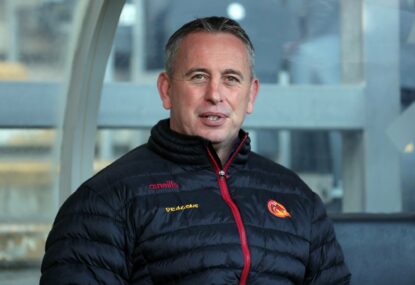 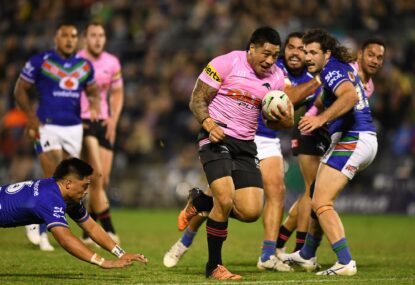 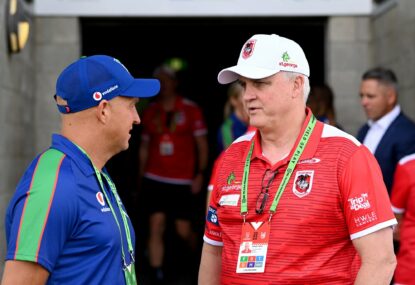