News
28th May, 2022
7
Join the conversation
Advertisement
Write for The Roar

NSW State of Origin captain James Tedesco hit top form on the eve of the 2020 series as he helped the Sydney Roosters withstand a fightback from Cronulla in a 36-16 NRL win.

In what was one of his and the Roosters’ more impressive attacking performances of the year, Tedesco led the charge as Cronulla’s five-game winning streak at PointsBet Stadium came to an end.

Craig Fitzgibbon’s side have turned their home ground into a fortress this year, but they barely fired a shot until the second half against a Roosters side which has endured an uncharacteristically erratic run of form (7-5).

Tedesco was at the heart of everything that went right for the Roosters and his performance will hearten Blues coach Brad Fittler who is already without Tom Trbojevic and Latrell Mitchell.

The fullback’s jinking runs helped get the Roosters out of the backfield and he was in the right place every time as back-up or support.

In all, Tedesco finished the match with 205 running metres, seven tackle-busts, two try-assists and a try of his own.

It helped the Roosters that the Sharks were way below par and in a worrying sign for Fitzgibbon, his side didn’t score until the 56th minute when Ronaldo Mulitalo crossed.

Fitzgibbon was coaching against Trent Robinson for the first time since he left the Roosters after serving as his assistant coach for almost a decade but on Saturday the master won out over the apprentice.

Daniel Tupou put Robinson’s side ahead with a double in the opening 20 minutes before a searing break from halfback Luke Keary.

Tedesco was backing up in support and flicked the ball out the back of his hand to send back-rower Nat Butcher over in the corner.

Tupou turned provider when he set up Tedesco on the inside, with the fullback calmly finishing to give the Roosters a 20-0 lead at halftime.

Veteran prop Jared Warea-Hargreaves pushed the Roosters further ahead when he crashed over after another incisive Tedesco break.

Wingers Mulitalo and Sione Katoa each jagged one back for the Sharks and when Cameron McInnes crossed to cut the Roosters’ lead to 24-16 with 10 minutes to go, there was hope from the home fans that they could complete the comeback.

Roosters centre Joey Manu put paid to that when he wrapped up victory with a late runaway try before Connor Watson burrowed over to hammer home their advantage.

Cronulla have moved into the top four after defeating the Gold Coast Titans. 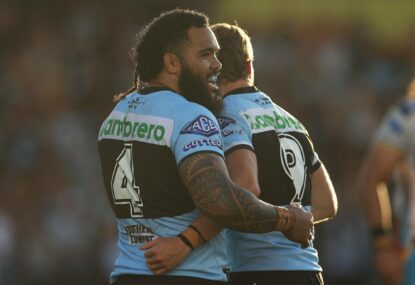 Cronulla came away from Redcliffe with the two competition points after the Warriors coughed up an early 12-point lead. 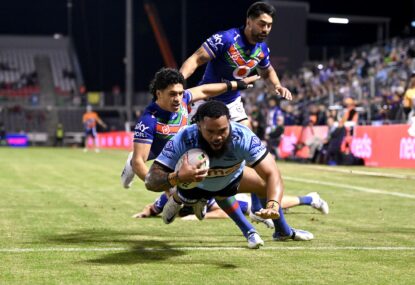