It has taken 20 years, but Australia have finally beaten New Zealand in a rugby sevens world series final, at Twickenham.

Henry Paterson starred for Australia in the London Sevens final on Monday AEST.

He scored a hat-trick of tries, including the winner in golden point extra-time, and made a try-saving tackle that prevented New Zealand from winning after the hooter in regulation time.

Australia’s 19-14 triumph was their first against New Zealand in a cup final since 2002 at Brisbane. It was the first victory over them anywhere in more than four years.

The Australians are also in a three-team hunt for their first world series title, which will be decided in the ninth and last leg in August, at the LA Sevens in Carson, California.

South Africa, beaten in the quarter-finals, hold the overall lead from Australia, by two points, and Argentina by six.

New Zealand was favourites in the final  after beating Australia in the pool stage, and Fiji 22-19 in the semifinals. 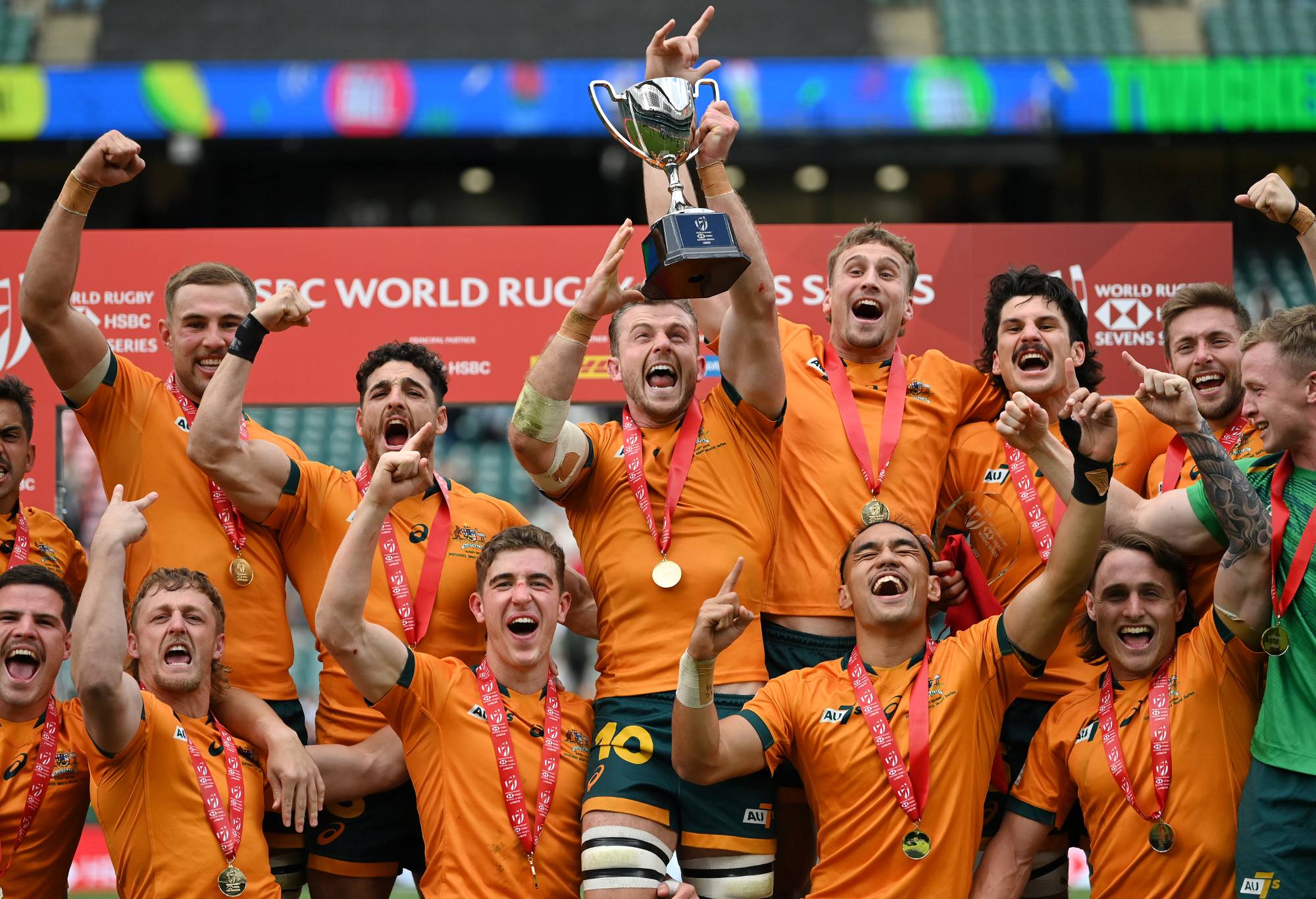 Nick Malouf of Australia (c) lifts the trophy and celebrates with his team mates after winning the final. (Photo by Dan Mullan – RFU/The RFU Collection via Getty Images)

But Australia struck first when Ben Dowling’s break finished with Paterson cutting back inside Matthew Gonzalez for the only try of the first half.

New Zealand hit back with converted tries by Akuila Rokolisoa, from a stolen kick off,  and Leroy Carter from Dylan Collier’s offload.

Paterson tied the score on 14-14 with two minutes left with a second try, outpacing the New Zealanders to the line.

Then, after the full-time hooter, New Zealand’s Caleb Tangitau looked to be sprinting free on the outside but Paterson tackled him into touch, forcing extra time.

From Australia’s kick off, Josh Turner tapped the ball back to the Australians and it was spread wide for Paterson to run in and secure their eighth title in series history.

Paterson was asked which he liked most, the winning try or the try-saving tackle. He picked the tackle.

“That will keep the coaches happy,” he said.

SANZAAR assessed the incident and opted to agree with referee Ben O’Keeffe that it didn’t reach the red card threshold.

Matera will therefore be free to face the Reds again this Friday in the first quarterfinal.

Wallabies lock Will Skelton has produced an incredible comeback from injury, powering through 80 minutes as La Rochelle beat Leinster in the Champions Cup final.

Skelton missed the past four matches with a calf injury, including the three previous knockout games in the competition.

In the absence of injured former All Blacks in Tawera Kerr-Barlow and Victor Vito, Skelton and his front-five colleagues took the fight to the tournament favourites, carrying 17 times and successfully crossing the gainline eight times for 46 metres.

He gave his all and kept going to the last to see La Rochelle home as first-time champions of Europe a year on from losing both the Champions Cup and Top 14 finals to Toulouse.

“It means everything to this club, to me, to the boys. We’re only a small town, you know, we’re not supposed to be here,” Skelton told BT Sport.

“We’re not supposed to be playing in these big games but we stepped up this year. It hurt last year, it hurt a lot but sometimes you’ve got to lose some to win one so it’s a great feeling.

“I think we showed a lot of character there. We’re a big team, we’re a power team ,we’re not the fittest team, like a few articles I read during the week, but it showed how much we care about this club, this town and for each other.”

The Wild Knights prevailed 18-12 over Suntory Sungoliath in sweltering conditions at Japan’s National Stadium in Tokyo on Sunday.

Capped by Japan last year, Gold Coast-born Riley was involved in the lead-up to Koroibete’s 28th minute try, drawing in two defenders to create the space for the Wallabies winger to score the game’s opening five-pointer.

Centre Riley collected one of his own in the 73rd minute to push the Wild Knights out to their six-point winning margin.

Trailing 10-3 at halftime, Suntory were kept in the game by the boot of All Black Damien McKenzie, whose four penalty goals brought his side to within a point of the Wild Knights heading into the last 15 minutes.

The Wild Knights were missing their influential Japanese Test five-eighth Rikiya Matsuda but his replacement Takuya Yamasawa pulled off the play of the match just before halftime when he knocked the ball from McKenzie’s grasp as he was diving for the tryline.

Kerevi and Koroibete are set to be involved in Australia’s three-Test series against England in July.

The win was the former Wallabies coach Robbie Deans’s fifth title with the Wild Knights, matching the five from his time in charge of the Crusaders in Super Rugby.

The fortunes were mixed for other Australians on the final weekend.

But Israel Folau will be playing in the second division next year after the Rob Penney-coached NTT Communications Shining Arcs lost the second leg of their relegation series 33-19 to the Mitsubishi Dynaboars.

Michael Cheika’s NEC Green Rockets survived in the top section despite winning just one game all season, edging Honda Heat on points scored across a two-legged promotion play-off where each side won one match.