A thrilling final weekend of Super Rugby Pacific left the Waratahs with an unexpected foe, and the Force missing out at the death as the quarterfinal match ups, times, days and venues were locked in.

A shock loss by the Brumbies against Moana Pasifika meant they went from third to fourth, and avoiding the Tahs, who stayed sixth with their late loss to the Blues.

The finals equation went down the wire with Western Force missing out on eighth to the Highlanders, despite spending four minutes in eighth on the live ladder as Melbourne Rebels took an eight point lead over the Kiwis in their match on Sunday.

Here is a look at the times and match ups for the quarters.

You have to go all the way back in the history books to Friday night for a guide to this one. The Crusaders went to a comfortable half time lead before winning 28-15 and a decent Reds comeback had Tate McDermott suggesting the Queenslanders would draw confidence from it.

“Really proud of how we managed to claw back into it and we’ll take that going forward,” McDermott said.

“Not too many teams get two cracks at the Crusaders in a row and we’ll take the positives out of that game because we’ve got to.

“It was as simple as holding the ball, when we stuck to things better as a team and worked hard and put phases together, we looked really good … but it’s about doing that for longer periods of time.”

Crusaders captain Scott Barrett will be looking for a step up in execution from his team this weekend.

“All week we focused on ourselves and didn’t look too far ahead … it’s about us getting momentum and playing some rugby that we’re proud of,” he told Stan Sports.

“We were creating in that first half and had a little lack of patience and weren’t clinical enough, come playoffs footy those chances are probably going to be less.”

Verdict: This looks a tough ask for the Reds who are missing James O’Connor, and have a 0-5 record against Kiwi opposition this season, with a negative points differential of 63 in those games.

The Crusaders’ win on Friday was without All Blacks Richie Mo’unga and Codie Taylor with both set to return for the knockout.

They could (should?) be without Argentina strong man Pablo Matera, who was yellow carded for tipping Jordan Petaia upside down in an incident that could (should?) draw further attention from SANZAAR’s citing panel.

Queensland have been smashed by injuries and are clearly missing Taniela Tupou as much as JOC. Their hookers have been blowing up faster than drummers in Spinal Tap – and they lost another when Matt Faessler left the field inside five minutes after copping a big hit.

The Chiefs won their previous meeting at the Melbourne Super Round 51-27 but the Australians were always chasing the game after Angus Bell’s red card in the second minute, along with an early yellow to Jamie Roberts.

Jake Gordon scored two tries for the Tahs but was upstaged by Chiefs winger Jonah Lowe who bagged four of his team’s seven tries.

The Tahs are in better shape on the injury front than they were then while both teams are coming off nail biting matches in the final round.

The Chiefs travelled to to Fiji and were completely over run down the stretch as Drua scored three tries in a seven minute surge that left Chiefs skipper Brad Weber conceding the islanders might have won.

The Tahs looked to be heading to victory over an understrength Blues before falling to a post-siren drop goal.

After Saturday night’s loss Tahs skipper Gordon wrongly suggested the Waratahs were set to face the Brumbies in the quarterfinal.

That miscalculation was shared by coach Darren Coleman who revealed his staff had spent three or four hours scouting the Brumbies in anticipation for that match up.

“I’m feeling down, the boys are feeling down, you’re going to feel down after a loss like that. We’ll lick our wounds tonight but wake up in the morning and get going on our next job.”

He said it was too early to bask in the job done so far.

‘We’ve been underdogs all year and we’ve got a good little underdog opportunity this weekend.’

Verdict: The Brumbies’ shock loss to Moana Pasifika merely changed their opponent this weekend – for the Tahs it changed their whole travel plans – and you wonder if that last minute surprise will disrupt NSW’s thinking and planning.

It’s undeniable this season is a massive improvement on winless 2021 but this is the biggest test of rookie coach Coleman, for all the positive vibes sent his way in recent weeks. The reality is his team, playing at home in front of a full crowd, were unable to ice a Blues B team. This is a tougher assignment and needs maximum effort from the team’s stars.

The Highlanders scraped into the last finals position when they lost 31-30 to the Rebels but the losing bonus point was enough to edge out the Force.

The Blues won both matches between the two sides this campaign but neither were blowouts with the Auckland side winning 32-25 and 32-20.

The Highlanders were messy against the Rebels and need to improve significantly, but captain Aaron Smith says they have nothing to lose.

“We know what we’re up against next week, we’ve got the Blues – bring it on,” said the All Blacks No. 9. “We have five or six days to get ready and our men should be bloody excited to go to Auckland play at Eden Park against the best team and see what we can do.”

Verdict: The Blues finished six points clear at the top and are coming into the knockouts on the back of a club record 13 straight wins. And it’s not just that they’re winning – they’re doing it even when they look done. Two weeks running they’ve scored post-siren drop goals for victories over the Brumbies and then the Tahs. And they did it with completely different teams.

With eight starters completely rested against NSW, the Blues will be rested and ready. You can’t see them losing this one.

The Brumbies started May with an 42-25 win over the Canes that improved their record to 9-1 and everything was looking rosey. Coach Dan McKellar is a fan of momentum, but a month down the line the Brumbies have the opposite of that finals wining ingredient.

They go into this game having lost their past three. While defeats to the Crusaders, and a post-siren gut wrencher against the Blues, can be easily processed, you wonder what the Brumbies are going to do with that awful defeat by Moana Pasifika. 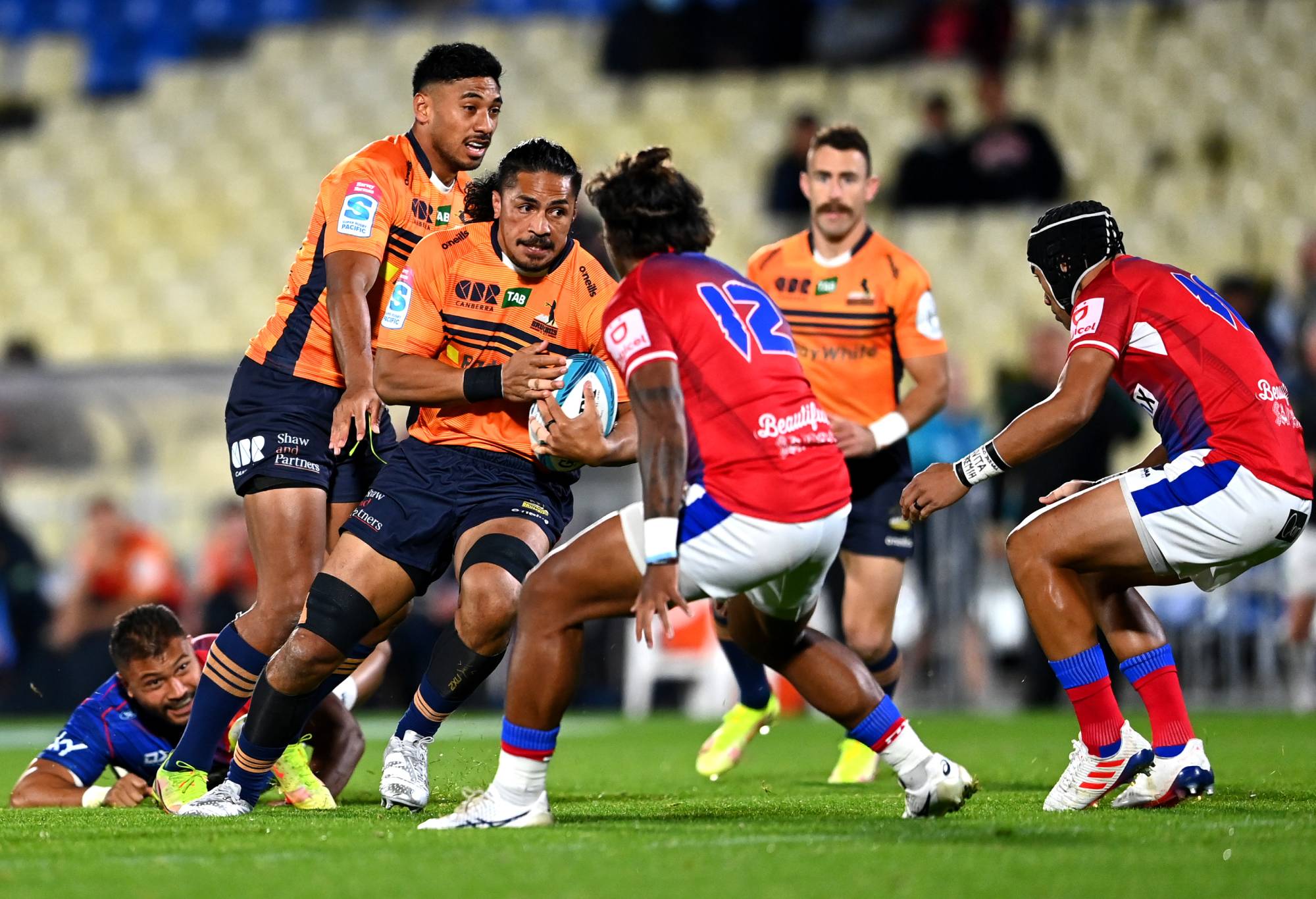 Sure MP were fired up and emotional in front of friends and family, but the Brumbies inability to beat the competition’s wooden spooners, and producing their worst performance of the season, suggest there are issues to overcome.

“So it’s not great learnings for us. The bright side is we get another opportunity next week in the finals.

“We just need to regroup, stay connected and make sure we learn from tonight.”

The Hurricanes come in on the back of a tight game in Perth.

Verdict: Much has been said about Dan McKellar’s pathway to the Wallabies job, and this weekend’s match up will deliver a big test of his credentials. Who wins probably depends on what Brumbies turn up – the rabble that lost their composure against Moana Pasifika, or the team that led the Blues until Beauden Barrett’s winning drop goal a week earlier.