Tane Edmed has ended speculation about his immediate playing future, resisting apparent interest from the Western Force to remain with the Waratahs for the next two seasons.

Edmed has become the club’s first choice No.10 following injury to Ben Donaldson and Will Harrison and his impressive form has seen him touted for higher honours as the Wallabies build for the 2023 World Cup.

Edmed is a product of the Waratahs and club rugby pathways graduating from the New South Wales Rugby Academy system and Elite Development Squad into the full-time playing squad in 2021.

The Trinity Grammar School product was also named the Dave Dennis Elite Youth Development Player at the completion of the 2020 season after steering his Shute Shield side Eastwood into the Grand Final in his debut season of 1st Grade. 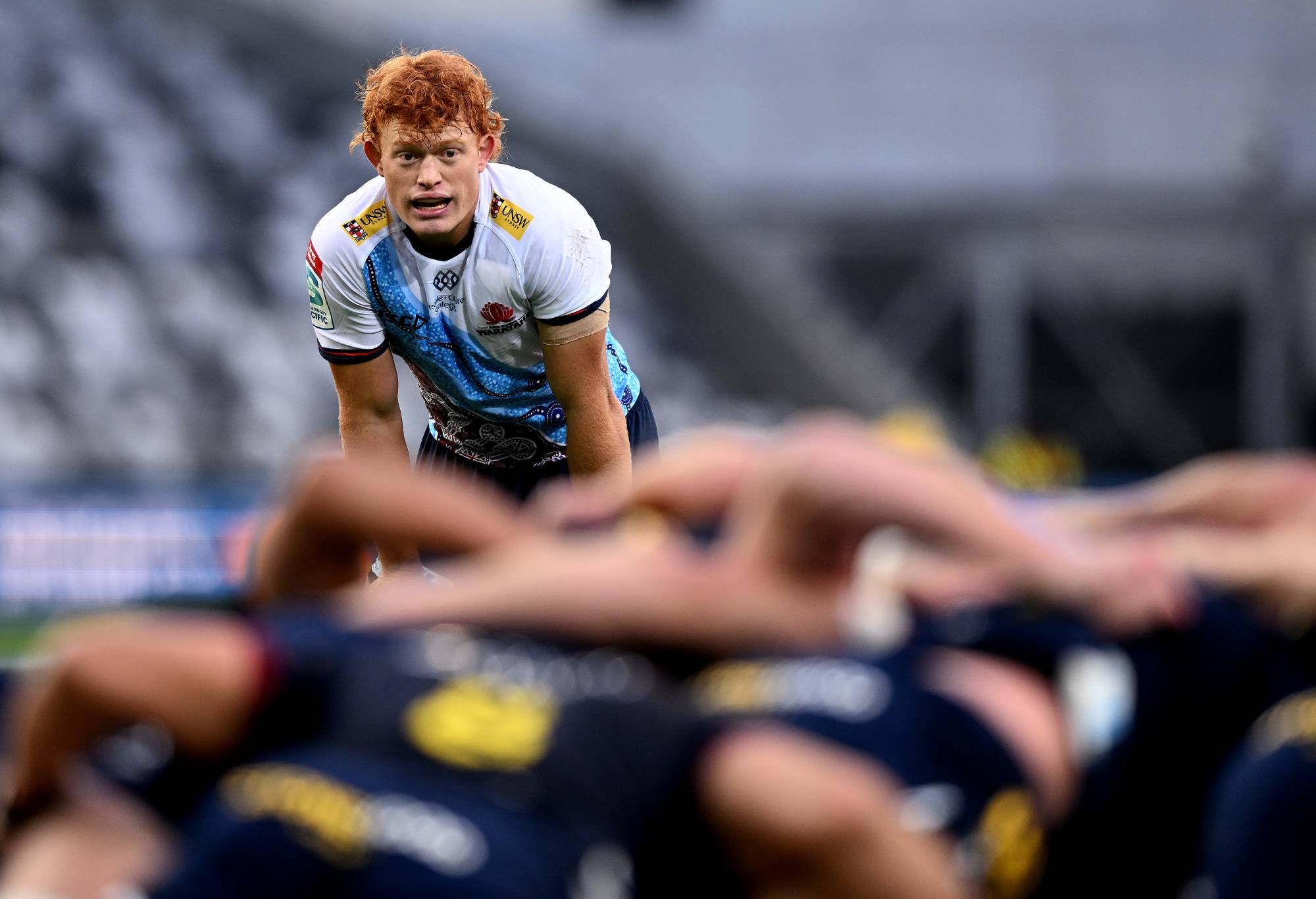 “Yeah, it’s pretty unbelievable, I grew up here, have a lot of close friends in the team and there’s just such a good feeling around the group,” Edmed said.

“The coaching group here is world-class and I feel that it’s the best place for my development as a person and a player, and one of the main reasons I’m staying.

“The future is really exciting here with the new facility, the new stadium, and in this incredible culture that we’re building, so it would be silly to leave.

“At the start of the season DC asked us what kind of legacy we want to leave or what our goals are, and mine was to be a part of this journey in rebuilding the Waratahs getting the team back to where it deserves to be.

“I love playing for the Waratahs and can see myself being here for years to come.”

Coleman said: “Tane’s had a breakout season and sometimes it just shows guys just need an opportunity, and once he got it, he took it with both hands.

“It’s a great reflection of the quality of the pathway system that he’s come through, from NSW schools into our academy and then graduating into the main team.

“Tane has a big future both here at the Waratahs and with the Wallabies if his game keeps developing.

“As a team man and a person, he’s first-class, he plays tough week in and week out and the boys love him.  We’ve seen from the Crusaders game how much he cares about this team; he wears his heart on his sleeve which is awesome.”

Mo’unga to leave for Japan after RWC

All Blacks flyhalf Richie Mo’unga has dropped a bombshell ahead of the Super Rugby finals, saying he will be leaving New Zealand after the Rugby World Cup.

Mo’unga, 28, told the New Zealand Herald, that he was going to look for an extended stint in Japan when his contract expires at the end of 2023.

“That’s definitely what I’m thinking,” said Mo’unga, who signed a one year extension to his previous deal.

“Another reason for the one-year sign on with NZ Rugby was allowing myself to have a look at opportunities overseas and seeing what somewhere like Japan has to offer and keeping my options open, whether that’s one or two seasons over there, and possibly coming back to New Zealand and hopefully play for the Crusaders and All Blacks.

Mo’unga said he was thinking beyond the one-year sabbaticals taken by a host of Kiwi and Aussie players.

“I want to show the possible clubs I’m going to that I’m not just there for one year and then leave. I want to build something; take a team and work on a few things. I’m willing to invest more than the one year and hopefully build on that season.”

He said he was doing it for his two young children.

With little ones it’s a huge change in perspective,” said Mo’unga. “I’m doing this for the opportunity to support my family for a long time even after I’m finished playing. That’s definitely a factor in how long I want to stay over there – how the family settles and what the balance is like and if I’m enjoying the footy.”

Phipps on the move

Former Wallabies scrum-half Nick Phipps is to leave London Irish at the end of the season to pursue an unnamed opportunity “abroad”, says the club.

Phipps, 33, joined the Exiles in January 2019 and has made 65 appearances for the club, scoring six Premiership tries this season.

Phipps played more than 120 Super Rugby games for the Rebels and Waratahs and 72 Tests and is one of 20 players departing London Irish – who are eighth in the league and have already finished their season.

Reece back for Reds clash

All Black Sevu Reece is set to return to be cleared to play for the Crusaders aginst the Reds in their SRP quarterfinal on Friday.

The winger was forced off after a HIA in last Friday’s win over the Reds.

Crusaders assistant coach Scott Hansen said Reece was being monmtiored but the team was hopeful he would be cleared for the knockout clash.

“He’s going through his return to play protocols, at this stage, and he has trained today (Monday),” Hansen told reporters.

“He continues to do that every day (go through the protocols), so the medical staff link-in with him making sure he is alright, and he has bounced back really well from that.

“At this stage Sevu is looking really good for Friday evening.”

Fellow All Blacks Richie Mo’unga and Jack Goodhue are also set for returns after missing the last outing.

Mo’unga had been given extra time off to recover from a finger injury and should replace Fergus Burke while Goodhue will likely be named at 13 ahead of Braydon Ennor.

Hooker Codie Taylor, who injured ribs against the Brumbies on May 13, should also be fit to start.

World Rugby has announced the line up of match officials for the next few months, including the men in the middle for the Wallabies clashes with England in July.

The June 25 fixture at the Estadio do Restelo in Lisbon will be the first men’s international to have been controlled by an all-women’s team, with Robinson to be joined by assistant referees Sara Cox (England) and Aurelie Groizeleau (France), along with Claire Hodnett (England) as the TMO.

It will also be the first time a female ref has taken charge of a men’s Six Nations team in a Test match.

Moana Pasifika captain Sekope Kepu has received a token three week ban after his red card against the Brumbies in the team’s upset win last weekend.

Kepu was playing in the 150th SR match when he was marched in the 10th minute after a high tackle on Brumbies’ Andy Muirhead.

Kepu’s guilty plea helped cut the length of the ban from six weeks to three but the former Wallabies prop’s season is over anyway.

All Blacks back in demand

After the failure to sell out home Tests in 2021 caused some alarm across the ditch, the excitement has returned in 2002 for New Zealand Rugby.

NZR has announced the first test against Ireland on July 2 at Eden Park has been sold out.

The Kiwis are expecting a tough time against a team that beat them in November.

“We know we’ve got an Irish team based around Leinster and they have a lot of cohesion in that team and will come in really prepared so we have a series with some real meat in it,” said coach Ian Foster.