I went to school with a kid, who on occasion, peed his pants at lunch time. The result of this was that he was teased a little in the school yard – kids are mean – and that his mum would collect him from reception – where he’d drip onto a plastic chair – and he’d be taken home.

The driveway out of the school snaked its way past our classroom window, and what always struck me as odd, was that pissy-pants was always smiling and would wave to us cheerfully as he departed the school.

Of course, the teaching staff felt sorry for the young bloke, and when he wasn’t being tipped upside down by the groundsmen and used as watering can, he was being treated to freebies at the canteen and early departure for recess, all while being placed under a three-mouthfuls-only-from-the-water-dispenser ruling.

It’s amazing how socially aware grade 3 students are. Because we worked out, after months of cheery waves and smiling, that Fuller was pouring water down his own strides, pretending that he had a psychological problem, allowing the adults to fawn over him while setting himself up with an early departure from school.

For an eight-year-old, this was an incredible ruse. And on reflection, more impressive in adult life.

On return from his week-long suspension, pissy-pants went from schoolyard teasing target no.1, to kissing girls under the enormous willow tree that only the year 6 boys were allowed to hang in.

Hero to his peers and classmates, the spawn of Satan to staff; the gatekeeper of the rules.

Jack Ginnivan and Cody Weightman – they’re rowing the same boat, which hopefully has the bung in. They too are heroes to their classmates, but the spawn of Satan to opposition fans, and now the umpires, who are ultimate holders of the rules, integrity and spirit of the game.

Across the weekend, the umpires finally woke up to the fact that Ginnivan and Weightman hadn’t actually peed their pants and were sneaking a cheerful wave as they attempted their ruse.

Adults don’t like being made fools of, particularly on national TV.

Weightman threw himself at the moon, his signature move, as he led his defender into a marking contest to become a shooting stars meme; whilst Ginnivan started the game in favour of the umpires, winning two free kicks that resulted in two goals, but by the time the game finished, he had lost the trust of the officials having flung his head into whiplash, ducked his way into tackles and thrown himself to the ground like a wrestler put to sleep by Rowdy Roddy Piper.

In an afl.com interview during the week titled ‘Ginnivan on his point to prove message for the doubters’, the blonde-haired actor is quoted as saying “The people that hate me and doubt me, I really feed off that”.

Fun fact: When the umpires are hating and doubting you, it is difficult to feed off, particularly when your opponents are taking advantage of this by smacking you upside the head every chance they get.

It was John Noble of Collingwood coach, Craig McRae, to suggest in the post-match press conference that he will be seeking clarity from the AFL as to why Ginnivan wasn’t awarded high free kicks late in the game against Hawthorn.

But deep down, he knows why, having watched Ginnivan duck his way into a Changkuoth Jiath tackle, and by doing so ceding prior opportunity, and was very lucky not have been called for holding the ball. Maybe Sam Mitchell should seek counter-clarity?

Following that incident, he was hit high twice, where he picked the ball up cleanly, but rather than try to stand up and run, he shot himself lower and into the arm of the trailing defender attempting to tackle.

Jack Ginnivan’s junior coach, Patches O’Houlihan, has certainly left his mark on the young forward with his unconventional coaching methodology of the 5 x Ds.

But that gravy train of freebies might just be over now that the umpires are onto the ruse. 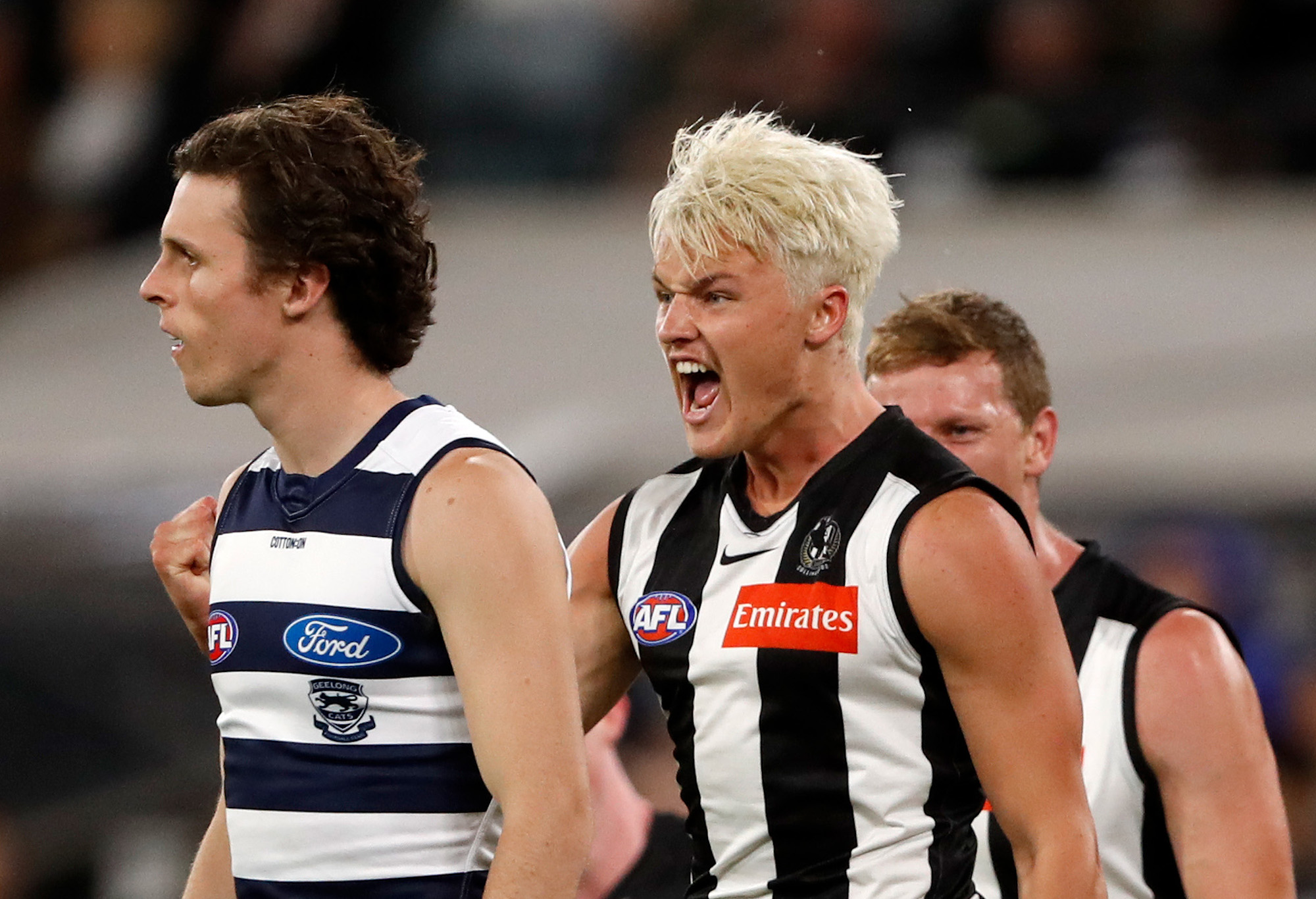 Ginnivan gets himself into great positions as a small forward and always picks the ball up cleanly. Weightman is the same. If you remove all the show-boatery and general nonsense that seems to surround both of their games, they’re freakishly talented, and will survive the lack of trust from the umpires if they use their natural ability to just play footy.

The moral of the story? Don’t be like Jack Ginnivan, or Cody Weightman, or Joel Selwood, who would fake their own death, sell their grandmas, or pee their own pants, if it meant winning a free kick.

The game is already hard enough to watch.